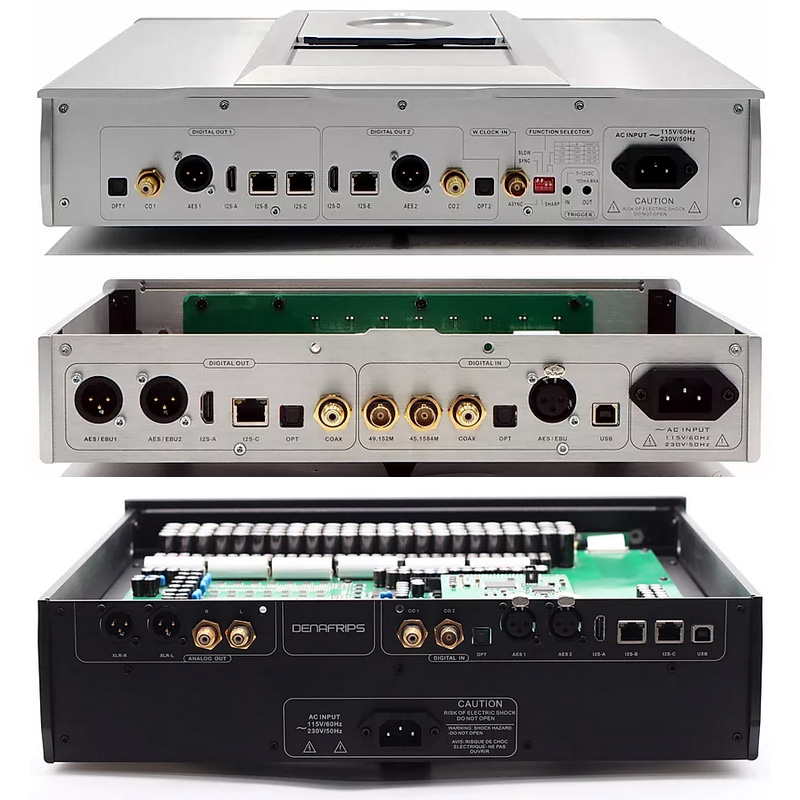 Holier than thou? If it's about the total number of holes on your back panels, Denafrips make for a decidedly sanctified brand. They improve your holiness ranking and adherence to the ancient command "be fruitful and multiply".

In this loose stack, we see the firm's Avatar CD transport on top, their Gaia reclocker in the middle, their Terminator DAC at the bottom.

There are countless ways to connect them and rope other sources like a PC or streamer into the digital fray before the final D/A converter leaves the binary world with its square-wave signal to enter the analog world of rounder waves which we can actually listen to.

If you wonder which format to use, there are different ways of thinking. For raw signal strength, AES/EBU's 5V standard is 10 x stronger so more robust than S/PDIF's weaker 0.5V. Unless you use the rare twinned XLR protocol, all of these formats limit to 192kHz.

Like USB, I²S over any of its connector options (here HDMI and RJ45, elsewhere also over 4 x BNC, even S-Video) isn't sample-rate limited. Unlike USB, I²S carries a clock signal. Unlike S/PDIF, an I²S clock does not embed in a serial stream. It runs on its own parallel leg so needn't be extracted from the l/r music signal on the receive end. Conceptually and practically, this has advantages to promise the best transmission of digital data.

The disadvantage of external I²S is absence of an industry standard for uniform plug/pin assignment. Even two I²S-enabled components using the same ports aren't guaranteed to talk to each other if their makers used different pin configurations. Here Denafrips DACs are one of the very few who allow users to change pin configuration and talk to off-brand components with mismatched pin layouts.

Another way of thinking holds that high external sample-rate streams get far more jitter prone. Its believers prefer upsampling at the receive not send end. In this stack that is the Terminator not the CD transport set to 352.8kHz; not a PC signal upsampled by player software to a crazy figure like 768kHz. Transmit 44.1kHz. Let the DAC upsample, in this case to 1'411.2kHz.

If you subscribe to this view, you prefer to transmit native digital signal. I²S where applicable then AES/EBU should be your best options. With very few hi-rez music files recorded at higher than 192kHz, even AES/EBU has you covered. Personal tests suggest that after I²S then AES/EBU we get at BNC, then coax, finally Toslink. Optical transmission involves extra conversion of an electrical to an optical signal then back to electrical again. This creates a higher likelihood of conversion losses. Often plastic fiber limits to 96kHz for lower bandwidth than S/PDIF. The edge Toslink enjoys is optical decoupling. That isolates the send/receive gear from a shared ground. On a strangely noisy connection, Toslink could then have the rare advantage. Trust your ears and pick the connection format that works best for you. Gaia supports all the usual suspects. To activate its clock inputs if you own a Terminator-Plus, "press setup once, press OPT twice. Clock light on. Press OPT again, clock light off. To confirm and exit selection, press setup again." 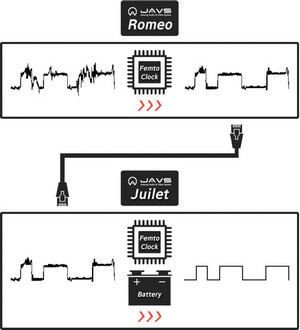 Do you still view reclocking in multiple stages as dubious? Perhaps this graphic makes the right counterpoint. It's from the Soundcat brand JAVS of Seoul in South Korea. They have the Romeo and Juliet pair of small boxes. They act as a two-step UHF noise blocker for incoming USB signal. Here's how they explain them. "The contaminated USB input signal is first sorted by Romeo's primary femto clock before being converted to an Ethernet signal to transmit to Juliet. Here it encounters a second clock alignment with battery power before seeing your DAC. It's complicated but minimizes the transmission of digital noise to the final DAC via physical isolation."

If we look at their very basic diagram, we see that the first stage called Romeo only partially cleans up the incoming signal. It still doesn't look anything like a pure square wave whose vertical rises and falls mark the timing of the digital bits. If this is how the pits and lands in a CD looked, our laser would have a bear of a time reconstituting the proper signal and the interpolation algorithm would work overtime. It's only the second stage called Juliet which essentially repeats the filtering progress of Romeo to strip off the remaining wave-form distortion to end up with the square wave signal.

Whilst this could be a very idealized visual to make an easy selling point we can wrap our heads around, it does rather neatly express the concept of multi-stage noise filtering. Even our brilliant Osmio counter-top water purifier uses five different elements to get the job done. In current hifi parlance, the JAVS twosome might be called a USB isolator plus regenerator?

It's like the proverb "if at first you don't succeed (to get rid of all the noise), try try again." If so, one expects Gaia to leave an audible mark even when strapped to the Terminator because it'll feed it with an already cleaner signal. Now the DAC's own noise filtering and processing should work nearer 100% to sound better. Which naturally is what I'd try to find out.