Standard lengths are 0.3, 0.5, 1, 2 and 3m but custom orders are welcome. Standard termination include USB A–B, A–C, C–B, C–C, C–micro B, A–micro B, A–mini B and C–mini B. This shows how these aren't intended for just computers, file players, streamers or DACs but portable devices; actually most any device with playback capability and some kind of USB i/o. As for the internal build, it claims highest purity oxygen-free copper and custom gold-plated plugs. Although termination make it clear, there are still directional arrows. Since the first two cables arrived for review, Emerald evolved based on user feedback. What changed is even better isolation of 5V power from the signal conductor. This made the cable a bit thicker and stiffer. This I know because I later received newer versions. They're still flexible enough not to be problematic. Workmanship and finish are solid. A few months of intense usage showed no visible wear or tear. 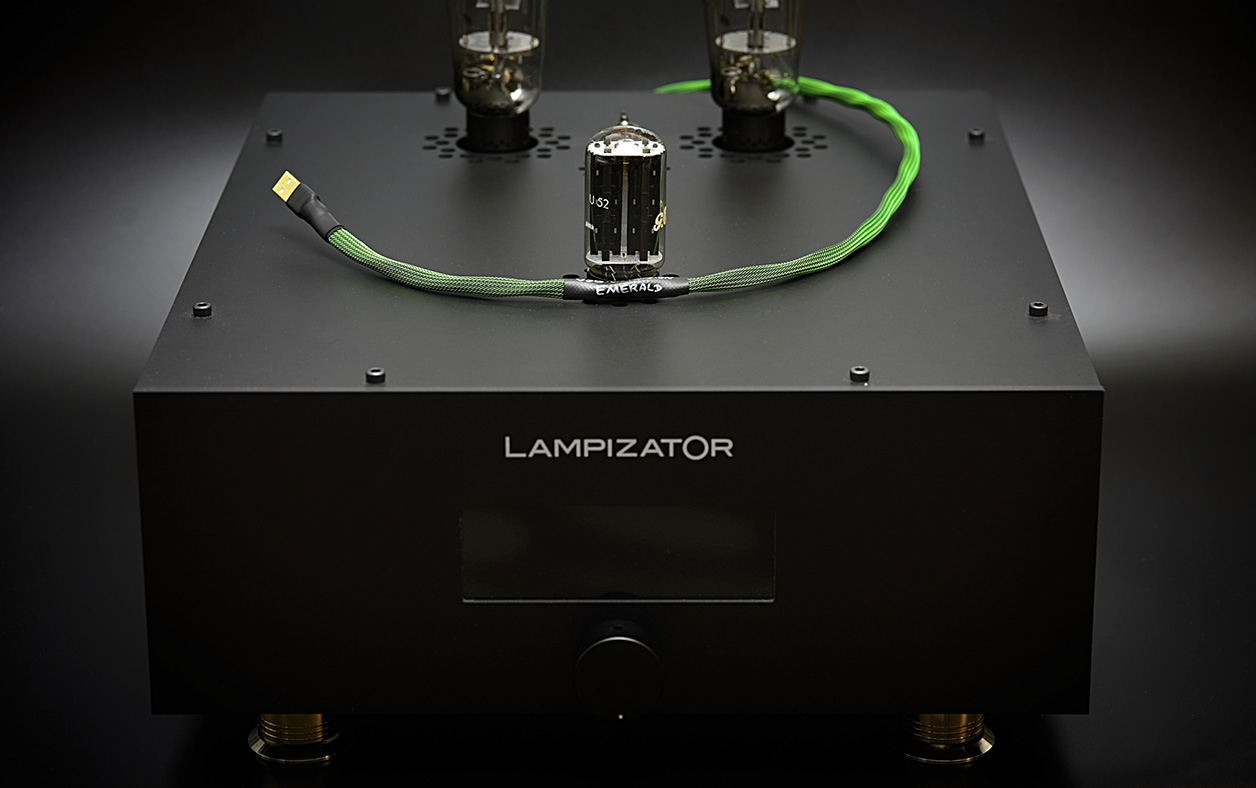 With the Expression Emeralds at my disposal for a few months, I used them with my dedicated server, a Silent Angel Rhein Z1 and Roon Nucleus. I also used them on several DACs like the Thievan Labs Tube Music Processor 9038, CD players with digital inputs like Acoustic Research's CD9 SE, Ayon's CD10 mkII or the DAC 50 module of Accuphase's E-380 integrated. On a daily basis I run two relatively inexpensive USB cables. The longer one is a FiData HFU2, the shorter a Tellurium Q Silver. The FiData connects my custom PC to the LampizatOr, the Tellurium enters whenever I decide to add the excellent Ideon Audio reclocker. Among other USB cables I tested, only a handful introduced performance enhancements significant enough to consider upgrading. One was the WestminsterLab USB Standard but it and the other few cost quite a lot. So what could the less expensive David Laboga Expression Emerald USB bring to my miser's table? Quite a lot as it turned out.

Let's start with first impressions. After listening to hundreds probably more than 1'000 components over the years, in most cases my first impression holds as the final assessment. With the Emerald cable, the first thing that caught my ear was how extraordinary effortless, open, fluid and natural the presentation was. All of it combined makes up what's often referred to as analogue sound although there is no unambiguous definition of the term. What does analogue sound mean to me? It's when during listening to digital, the difference to my analogue rig of primarily turntables and vinyl becomes blurred. The digital system shouldn't sound exactly like my turntable but, to simplify as much as possible, not have me return to vinyl with an instant sigh of relief. I do feel this relief in most digital cases, even very expensive ones. My J. Sikora Standard Max turntable is simply one of the top performers to market. Ever since I became proud owner of LampizatOr's Pacific DAC, I started to listen to far more digital (mostly DSD) yet the turntable remains my first choice. David Laboga's cable caused a further reduction of the already subtle difference between my reference DAC and turntable. I chose both of my regular USB cables for this very reason. After the first few albums it was clear that in terms of 'analogue' sound, the Expression Emerald went another step in the right direction. Take the opening track of the Masahiko Togashi & Isao Suzuki album A day of the sun. It was almost immediately clear that the Expression Emerald conveyed two performance aspects still better than my FiData. As a quite important element of this piece, bass was even more extended and had more weight/slam yet remained properly agile, punctual and perfectly differentiated.

The second gain was a further enhancement of the recording's spatial aspects. I always enjoy how the FiData presents a soundstage and its images but Laboga's cable was even better at it and more realistic. The point was not the soundstage's size where I had no complaints with the Japanese cable but the precision of image placement as well as their definition, shape and weight. In both cases the presence of the musicians was delightfully convincing. The Polish cable simply achieved higher precision and even sharper clearer individual images. The Japanese used weight and 3D but was more about palpability and presence than precision. The Emerald also reproduced the venue acoustics better. Reverberations and decays were slightly clearer which gave the realism of the presentation an additional very important dimension. In the next tracks of this well-recorded album, the piano sounded mightily impressive. It was large, powerful, dense, vibrant but beautifully fluid at the same time. I truly appreciated how effortless, open and real it felt. I could sense the lowest notes in almost physical fashion to see and feel the mass and power of this instrument. Due to the exceptionally convincing space and acoustic ambiance, the drums which the sound engineer spread between both channels kept surprising me. On this count the recording isn't truly realistic as the drums should localize in a specific and limited space but the engineer decided otherwise to make it more interesting. The high-precision Expression Emerald gave me a chance to enjoy this effect to the max.