While we're on human diets, adding weight is always easier than losing it. I feel the same about hifi. It's a lot easier to slow transients, dumb down resolution and fatten up textures than accelerating and detail-enriching a system that's porcine and lazy already. In that light, Nenuphar Mini BASiS tunes easily. It starts out at high speed, at high self damping and with high resolving power. Hanging on poundage to please personal beauty ideals is up to the owner. It's as easy as swapping amplifiers. "Yes but… what about the treble? Surely these whizzers can't complete with a Beryllium dome!" To kick off that discussion, here's a well-informed Jacob George of Rethm, from my review of his Aarka monitor with widebander + active bass: "We know exactly which frequencies do what while we shuttle between our measurement room and listening studio. But if I tell a lay person that what they hear as high-frequency energy with the tiniest shimmering bells or trails from a hi-hat doesn't exceed 8kHz and its useful harmonics not 16kHz, they reply that I don't know my stuff. Most of them demand that a speaker hit at least 30kHz before they take it serious. My own experience tells me that it's rather the energy density between 6-12kHz which is critical to what we call transparency and life in the treble." Indeed. 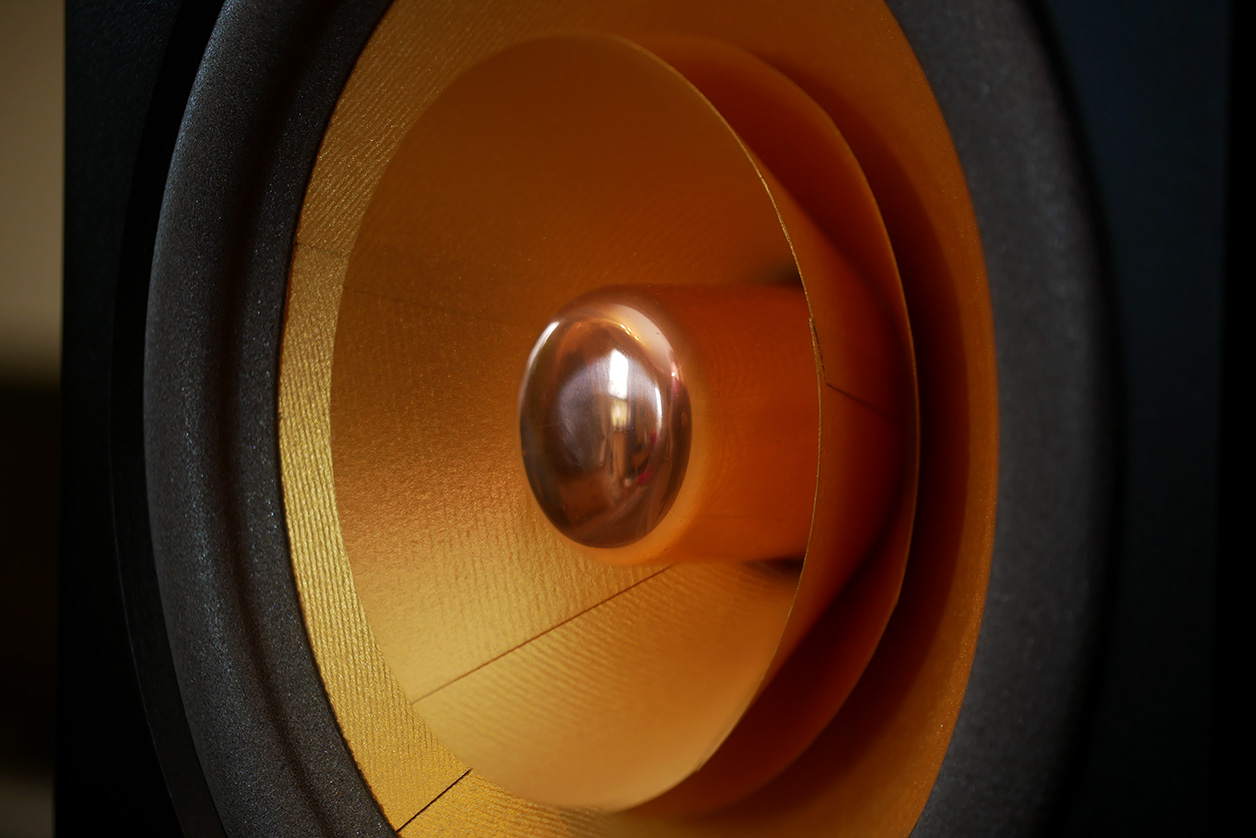 Now look at the surface area of Neo 8's main whizzer. It far exceeds that of any ubiquitous 1-inch dome tweeter. That means more air motion and with it, superior dynamic; or energy density to appropriate Jacob's illustrative term. To exceed those values would take a 'folded ribbon' aka air-motion transformer. If you still possess immortal 21-year old hearing, an AMT's 30kHz extension might be audible as some extra air and shine. But at that age you likely can't afford a Nenuphar Mini BASiS. Once your discretionary funds can, your hearing's reach will have equalized with these whizzers. Now our widebanders lack for zero extension. After all, it's our ear/brain which does the real listening, not an oscilloscope or glossy spec sheet.

To my ears, the greatest strength thus appeal of Nenuphar Mini BASiS is very high full-bandwidth directness. Consider it an umbrella term: Directness Inc. It includes immediacy, clarity, purity and speed. The enablers are twofold. The widebander point source covers seven-plus octaves without a preceding filter. Equally quick clear bass overlays no opacity, drag or time-delayed 'bloom' on the vital vocal band. Whatever else your own voicing does to this design, you start with that tangible directness. Hence a little seasoning goes a long way. It's so obvious. Too much and you might as well buy something slower and more colored. Why paper over the design's primary design objective aka raison d'être? That'd be twisted and a waste of money.

Which brings us to Nenuphar the bigger passive. We learnt that Mini + Sub10 had superior textural continuity. The 8" stack applied the same taut timing and enunciuation across the entire bandwidth. Big Nenuphar grew more portly, loose and bloomy as it descended into the upper bass and below. Electronic music with highly damped synth bass and cracklingly dry drum machines will favor the semi-active stack. That still leaves questions. Has the 10-incher tonal advantages in the vocal range? Is the 8-incher more informative in the upper mids and lower treble? To find out, I set up both adjacent. This got a bit busy but these sessions didn't focus on maximal soundstaging. To optimize my available space, all faced straight forward. Moving chair put me center with either pair. For highest resolution, the amp was the Bakoon fed direct by a Denafrips Terminator. That converted dejittered and reclocked digital data coming in via I²S over HDMI from a Soundaware D300Ref. 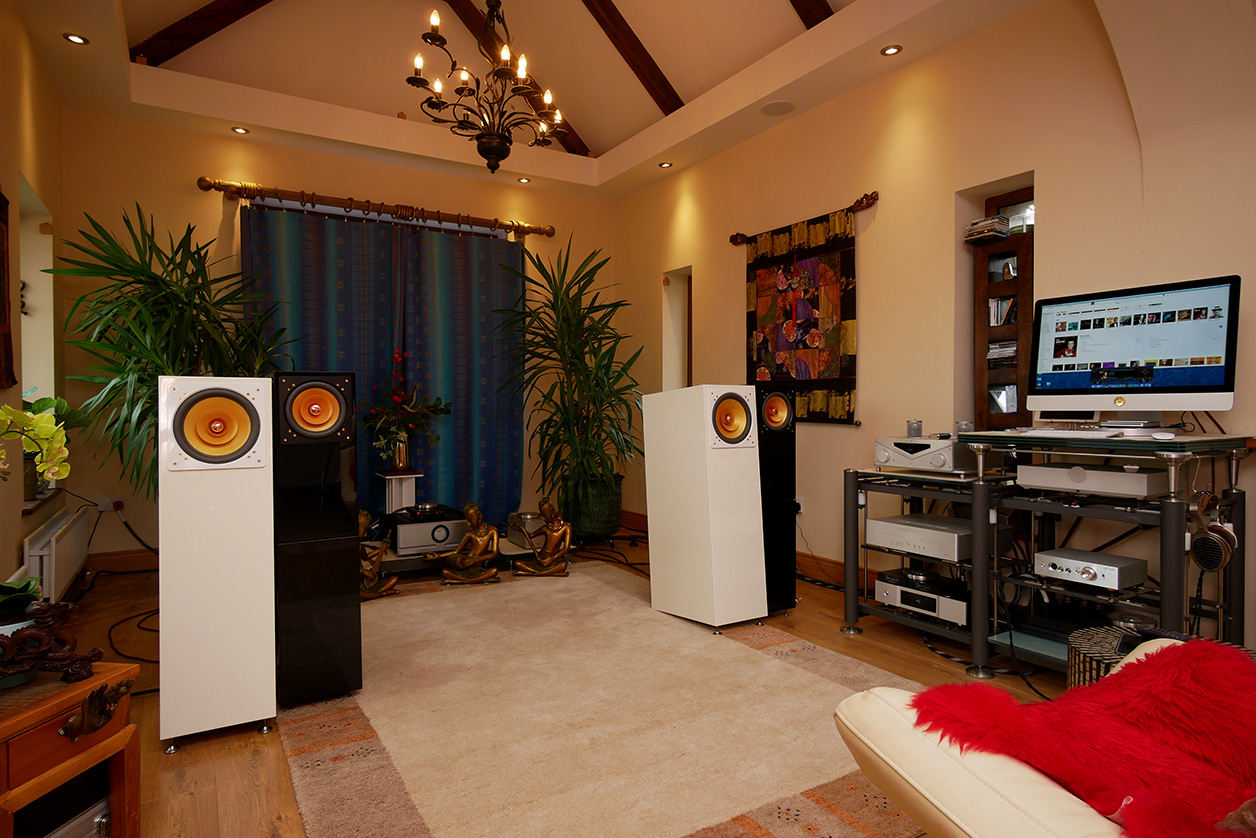 Using well-recorded vocals from Eda Karaytug, Camaron de la Isla, Basia and Sting, the verdict—about those two extra inches of diametric thrust—was plain. One octave above and below 261Hz aka middle C as the heart land of the midrange, the 10-incher showed demonstrably richer. It didn't matter whether it was voices, a plaintive bansuri flute, twangy Manouche guitar or clarinet. The same range exhibited greater fullness and weight. For that extra materialism right in the middle of the band, the F10 Neo squeezed more juice from the same amplifier. It really didn't have the F8 Neo register as lean by contrast. It was simply less weighty and not as ripe. In terms of a singer's maturity or even that of a fine spirit, the smaller driver caught them at a younger age. That was the essential advantage of the bigger cone surface. It enhanced midrange gravitas. Whether the F8 Neo's treble really was a bit more open or merely had its lighter midrange create said perception was academic. The subjective result was the same. It gave the smaller driver a bit more apparent speed in the upper presence region.

Given the undeniable advantage of sealed active bass over quarterwave back loading a passive widebander; and the smaller advantage of a larger widebander for midrange heft… the ultimate Cube of early 2020 should be Nenuphar BASiS as the F10 Neo + Sub12 stack. As Rethm and Voxativ have learnt to do, now Cube expand the single driver recipe with active woofers to retain their classic appeal whilst adding perfect fitness for modern music and large rooms.