September 9th: "We are still doing final tests for the 15-incher because we want it to be better than the 10" in basically all parameters. We went from too bright to too rich so now must settle somewhere in the middle." By October 11th, Grzegorz who we see here as captured in Munich by German Cube Audio dealer Klangloft premiering a gloss veneer finish for the Model 15… 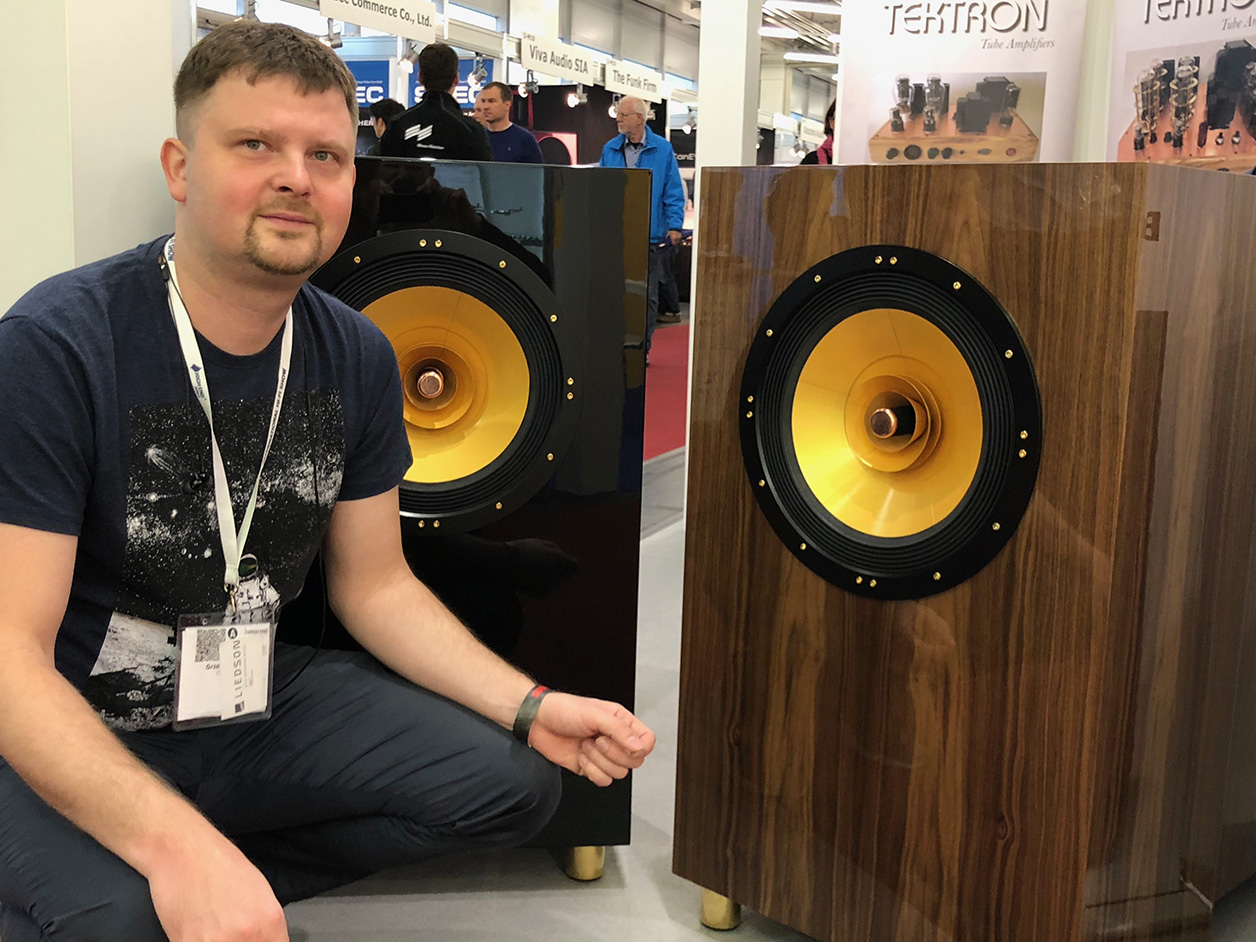 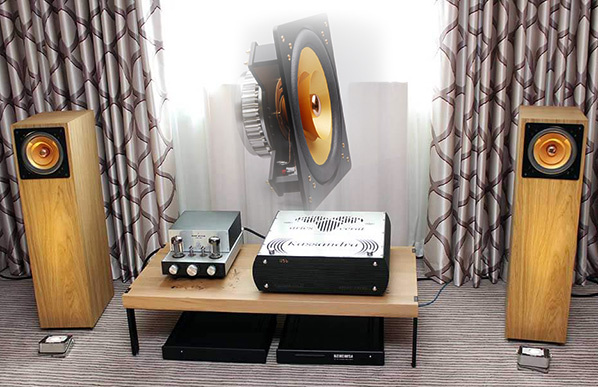 By then the industrious folks from München's Klangloft had taken the opportunity afforded by the regional show of Westdeutsche Hifitage to premier Nenuphar Mini in a brand-new wood finish. Our Berlin syndication partners fairaudio.de described the setup as "pursuing paths less traveled. Here they introduced Cube Audio's new €11'900/pr Nenuphar Mini. That widebander played it utterly off the leash on Rike Audio's integrated amplifier Romy. This should be taken quite literal given how the signal suffered no handcuffs from a crossover. Not completely irresponsible for making such impressive sound was likely also the very big and very chromed €22'500 Kassandra Reference MkII DAC from Cyprus brand Aeries Cerat in whose catalogue it actually rates as their entry-level model."

Cube and Grzegorz weren't content huddling in the trenches warming themselves on a fire. They were busy continuing their assault on the traditional widebander castle. With the Model 15, the final onslaught of the trebuchets was on the horizon. Down with the walls of Jericho? In the meantime, Cube used their domestic fall show in Warsaw to unveil yet another novelty in an exhibit shared with local valve heroes LampizatOr and, from Greece, a Tsakiridis Devices Theseus 6550 single-ended pentode amplifier to reiterate that little power goes far when the speakers are right.

Alas, Mini had traded its frame stand for the BASiS subwoofer. This was Poland's answer to Voxativ's Pi Bass ($10'500) and Z Bass ($3'900) and India's semi-active Rethms. It meant growing choices in a niche of particular interest to aficionados of low-power amplifiers. The one thing they and the speakers which love them tend to have trouble with is low loud bass. Adding self-powered big-woofer'd bass solves it. Reach for the bombast and step on the gas.

Checking in with Grzegorz after the show, "when it comes to the 15", we're still trying to shrink the cabinet since at the moment, it needs to be around 400 liters to rock and have a good sound balance. So we're still fighting with that and will resume those efforts back in December as we're doing another secret project in the meantime. For now, we could send you either Nenuphar Mini BASiS (the 8" Neo plus 10" woofers) or Nenuphar BASiS (the 10" Neo with 12" subs). The monitors themselves are designed for small Asian rooms. They must be placed directly against the front wall to boost bass. But with subs, let's just say you can do things that no one has dreamed of." 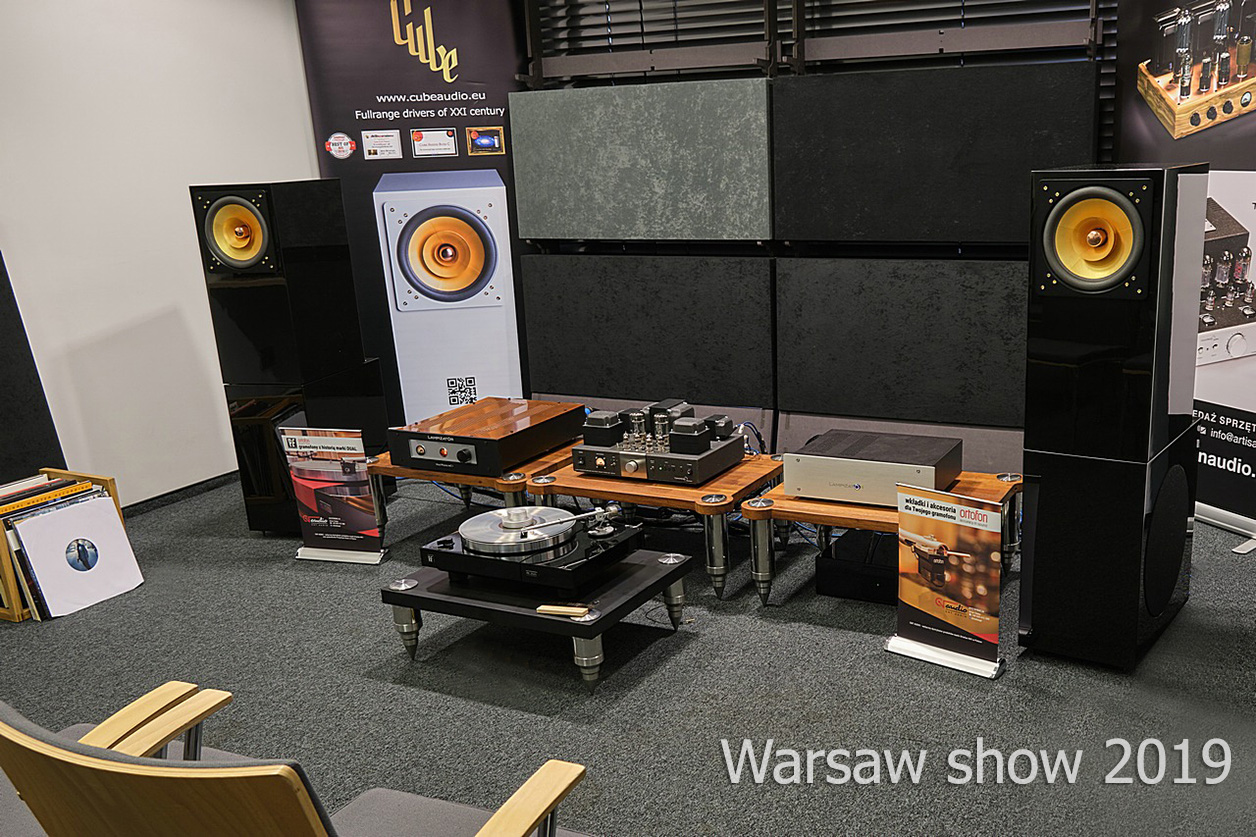 As someone who hardly ever remembers dreams, that sounded perfect to me. With the 15-incher delayed and me not having heard the 8" Neo driver yet, I asked for the Mini combo. With active bass assist, the smaller widebander might just be preferable in the upper bands. With a pair of white Nenuphar on hand, I'd find out soon enough. In Warsaw meanwhile, regular contributor Dawid Grzyb had taken delivery of his loaner Nenuphar pair. His first email comment? "Bass response is bonkers." On that score, I expected my BASiS-enhanced loaners to be even bonkier. Again, actual listening would tell.