Let's rewind to the type speaker we review today. It's a still reasonably compact widebander thus LF challenged. Which makes my bass comments a bit subversive. At €13'000/pair of course, these subs are seriously expensive. So excellence is mandatory. Still, will owners of passive multi-way speakers entertain them? Very likely not. They might see little to no benefit from marginal if any extra extension and power. But that would look in the wrong places. This isn't about more bass quantity. It's about far higher bass quality. Sealed alignments. Dedicated bass-only class A/B amplifiers. Sufficient headroom for up to +6dB boost between 30-50Hz. Adjustable gain. Adjustable low pass. Adjustable phase. To maximally benefit wants deliberately bass-limited mains. Now the Sub10's advantages are enjoyed across the first two octaves, even three. Hello mini monitors. In fairness, ultimate combos are probably Cube's own. Their drivers and boxes undergo specific tailoring for best matching so there's no high-pass filter on the midrange. All in, that elevates a former niche genre into true universality. It bolts on strengths which, more often than not, should eclipse big hulking luxo towers of the passive non-adjustable woofer persuasion. 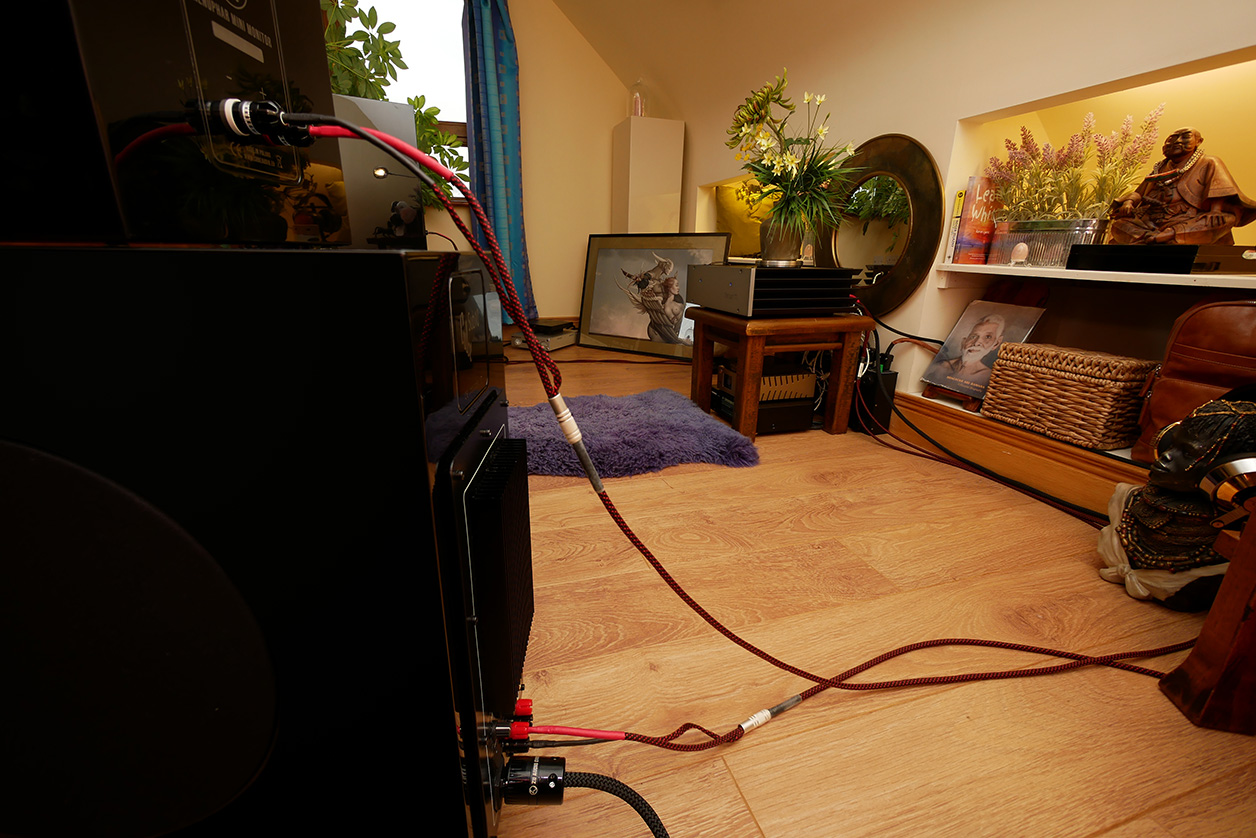 It's just a bit perverse then that this subwoofer topic—approved as it is for home theater and MidFi but not really for upscale high-end audio yet—would sneak into the latter realm arm in arm with esoteric single-driver boxes. "Lookin' maahvelous, dahlin'!" Thinking readers already deciphered some implications relative to big Nenuphar. Astonishingly good to about 30Hz, its reach is milked from a quarter-wave box which works as a quasi rear horn. By design that's less damped than the sealed Sub10. Its settle times are slower, overhang is longer. Though it can give an illusion of scale aka big bass like  ported bass does over sealed, it's clearly not as precise, articulate or well-timed. It includes more droning, bloat and flab. Here Nenuphar Mini hits harder and sharper when perched on its active bas(s)is. It executes mini-monitor precision down to the foundation where solo big Nenuphar plays it rounder, far less tautly sprung and not nearly as controlled.

By not pursuing extreme sensitivities but adding counter whizzers, Cube Audio widebanders are far less critical of that forward presence region which during the rein of Lowther popularity was colloquially known as 'the shout'. Just so, unusual detail density in our hearing's most sensitive band still means that voicing with amplifier choices remains part of the equation. Nenuphar simply gets on equally well with the right transistors as it does with tubes as the traditionally favored widebander companions. If it weren't so, accepting today's assignment for a household without a single valve amp would have been irresponsible. In fact, our combination of Vinnie Rossi L2 Signature linestage and Bakoon AMP-13R is an idealized valve amp. Direct-heated triodes without output transformers or coupling caps perform noise-free voltage gain with 900kHz bandwidth. An equally fast current-gain circuit with lateral power Mosfets and 0.5Ω output impedance controls the speakers. High-ish output impedance avoids overdamping drivers with innately high self damping from powerful magnets and light diaphragms. Upstairs I simply eliminated the Elrog or Western Electric triodes to run a variable DAC straight into the Bakoon. That gave maximum speed and resolution at arguably the expense of being just a mite cool-ish. 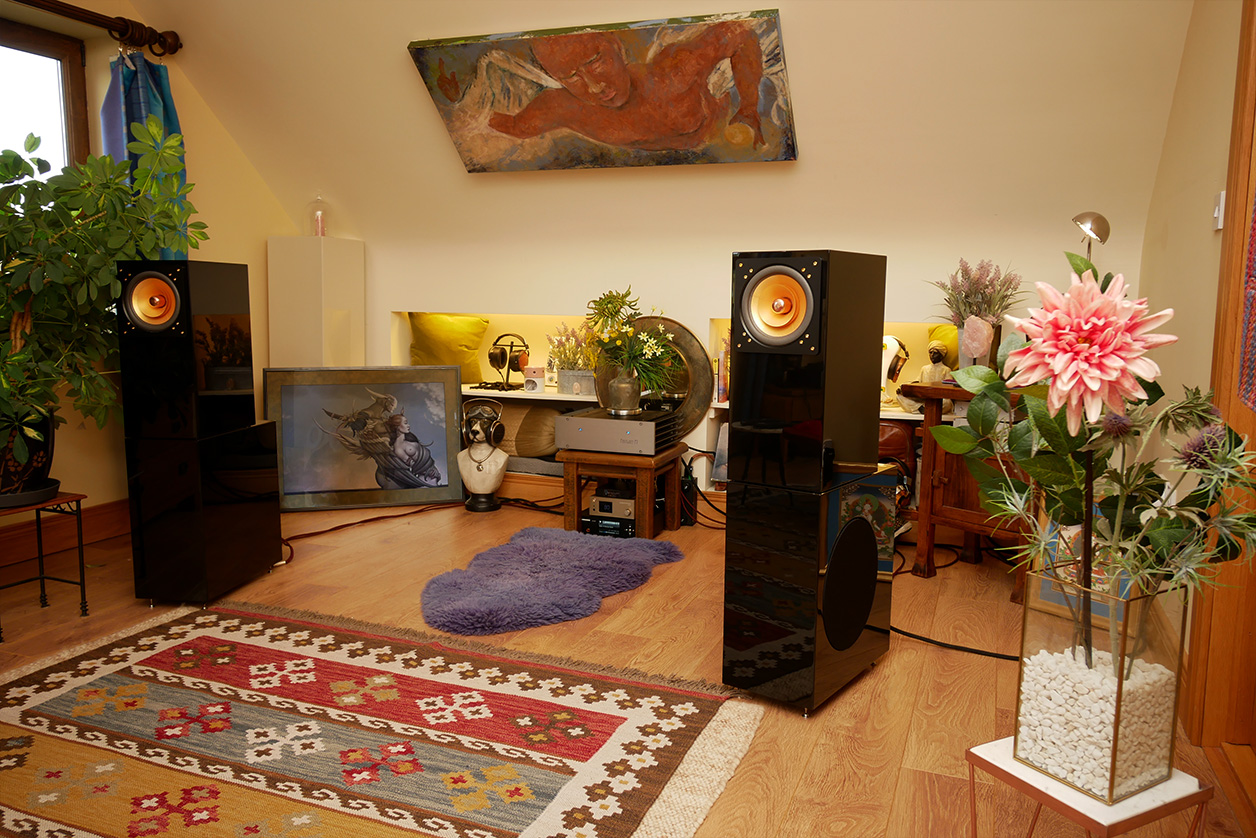 Swapping our trifecta Japanese/Korean/Californian amp for an all-American Nelson Pass SIT-3, I had instant single-ended class A. I had NOS static induction transistors with bona fide triode curves. I had usefully high output impedance. The musical climate changed accordingly. The Bakoon had put me in a bright Nordic summer's day. The breeze was brisk, air and light pollution at zero to give ultimate blue-sky clarity in extreme focus. The FirstWatt went well south of the border. It was afternoon in Tuscany and early fall. First leaves begin to deepen their colors. The light is softer. Edges are gentler. The breeze is warmer. Lunches are far longer. The overall feeling was of lazier mellow opulence. Things felt slower, more settled and stately. Leading edges were gentler, hence separation less extreme. The midband was richer and not as front-row direct. Espresso pure had become latté with a lump of sugar. As baristas the world over know, people enjoy their java from the bracingly acidic to the cloyingly sweet. They may fancy a dash of cinnamon. Or should it be chocolate or cardamom? They may demand a shot of Armagnac, Bailey's or Cognac. Anyone serving just one type of coffee quickly loses clients. The absolute sound is whatever you like best.