Meet 'n' greet. Our upstairs ~4x6m room made for the first of three test stations. It was likely representational for the size room many would-be buyers will have. The very simple but top-quality preceding hardware was a Soundaware D100Pro SD card transport forwarding BNC bits to a Jay's Audio DAC2 MkII. That fed the superlative Bakoon AMP-13R for 25/50wpc into 8/4Ω of ultra bandwidth lateral Exicon Mosfet power. Volume there is controlled by switching values on the output resistor which sets the amplification factor of the firm's patented current-mode gain stage. It's a far purer approach than first generating voltage gain only to burn it off resistively in the very next step. Speaker supports were our UK-sourced Track Audio stands with five segments for the uprights. That makes for bog-standard 62cm height including the spike shoes. It's ideal for monitors that put their tweeter on top to have those at ear height. In this case of course, it placed the tweeters below ear axis. 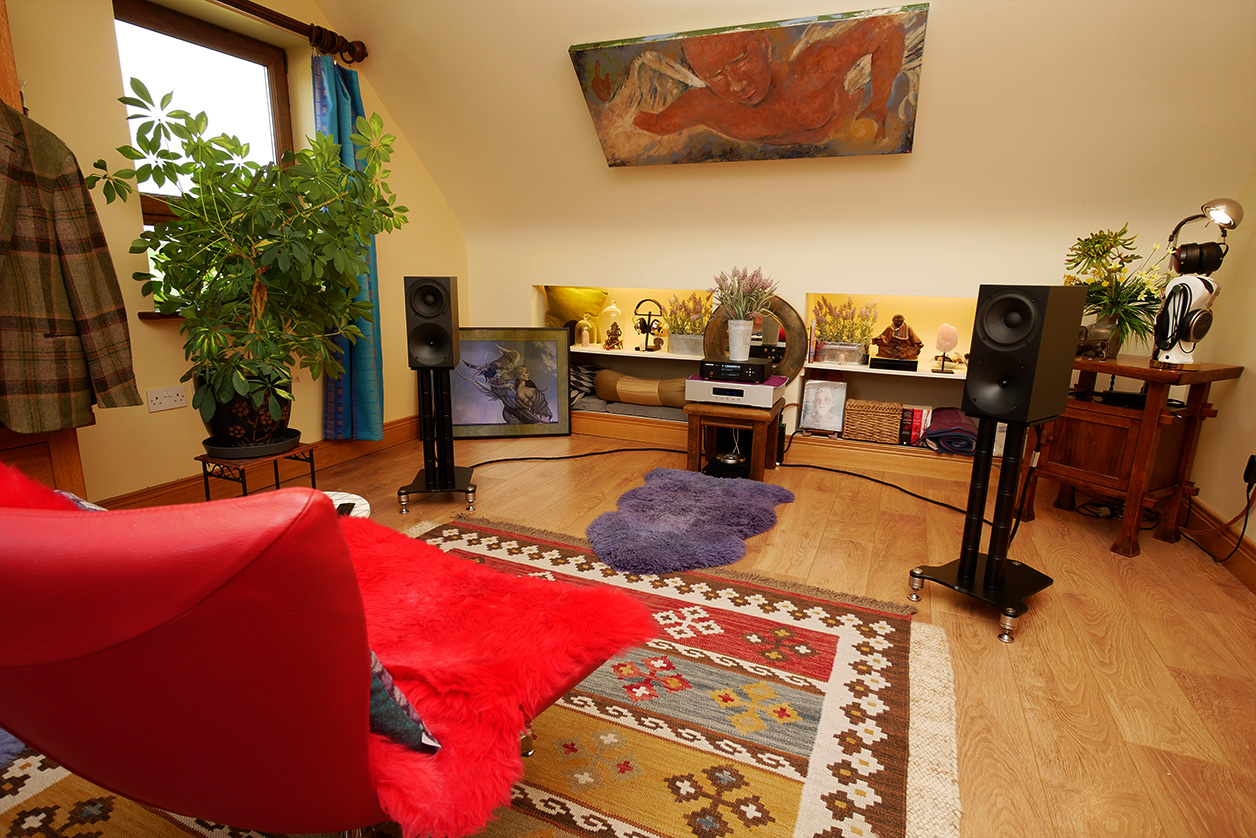 Lacking sufficient spare segments to build in extra height, I tried a lower seating arrangement to check on relative tweeter amplitude. I didn't hear sufficiently significant difference to revert to our usual red chair which was rather more comfortable. 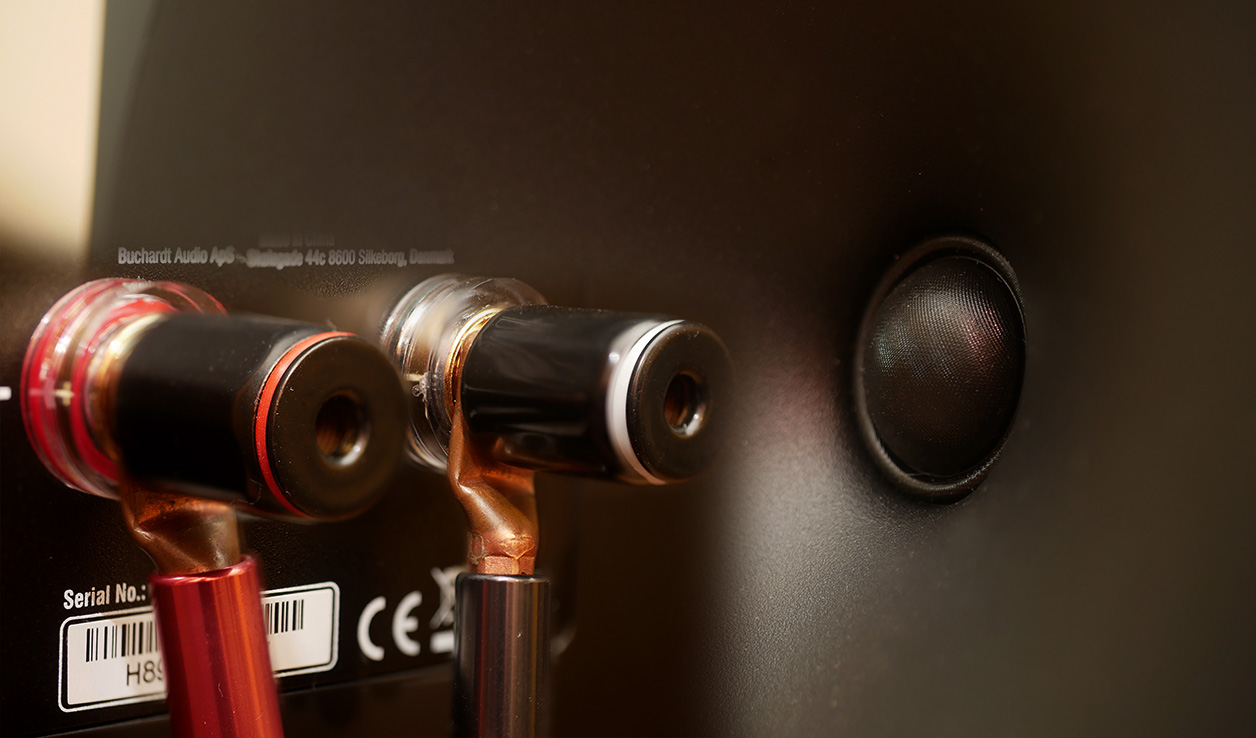 Regular room levels sat at about 50-60% of the amp's gain options. In short, 25 watts into 8 ohms were perfectly adequate for my purposes even when I cranked it a bit. Downstairs I'd have 200 watts to also join the other team which believes that you can never have enough power.

Gautama's middle path. On the hifi show room, time tends to be limited. Naturally, here the quality of sonic balance is often underrated. More extreme performance in an isolated discipline—pick what you like—registers quicker and more profound. That more easily clinches a "never heard that before" sale. It's once one lives with such specialists over the longer haul that what initially seemed a strength registers as an imbalance. Now everything sounds skewed to bling up that same old aspect. Had one only opted for a less spectacular better balanced performer becomes the regret. 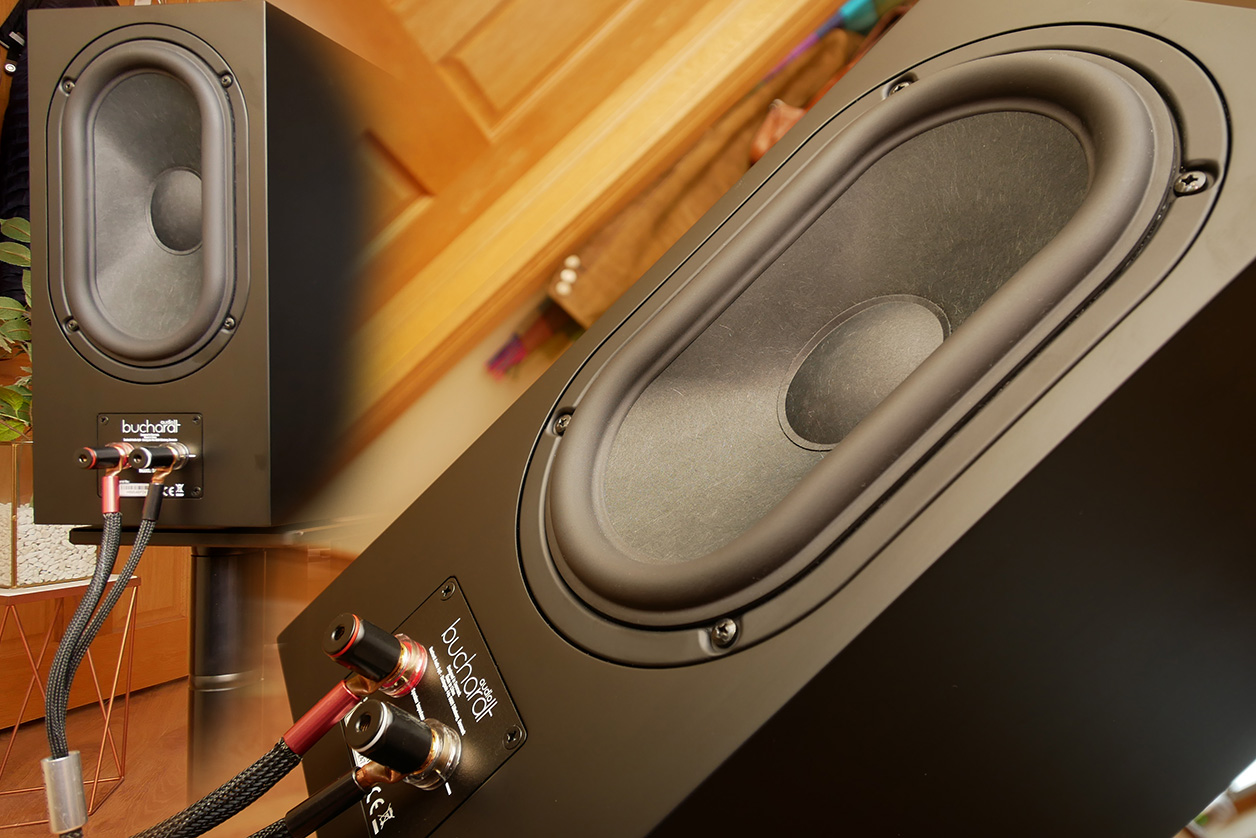 Precisely on that score I doubt regret will factor today. The S400 is voiced soft on top, chunky in the middle and for what in a compact still affordable 2-way is unusually endowed bass. The acoustic center felt set slightly below middle 'C' and the overall perspective radiated out from the lower midrange. That naturally gave more precedence to the low than high frequencies. This darker denser tonality mated to lower separation or in-sight magnification when compared to admittedly far costlier but also not direct-selling class leaders like the sound|kaos Vox 3 or Camerton Binom-1. On the very same system, those play it decidedly more open throated, microdynamically aspirated and dimensionally teased out. On speed and resolution, they match the Bakoon aesthetic. The Buchardt instead struck me as more of a Simon Lee take. That's a South Korean designer who for decades worked at April Music before launching his own brand Simon Audio Lab a few years back. In his own words of Simon sez, he champions "the soft power of music we lost".

Connect the word power to bass by considering where musical power originates. Assign soft to the treble. Add "we lost" to set proper time. It distinguishes the voicing from today's obsession with close-up detail. It's like that TV chef who shows off his speedy slice 'n' dice skills with a knife. Such extreme near-field resolution—audiophilia's macro porno which is all about body parts not full persons—routinely comes at the expense of emotional involvement. It speaks foremost to the analytical mind as the observer, not the heart as a participant. Voilà, based on its first showing, the older sonic ideal prior to elevating detail über alles was what the Buchardt S400 celebrated. It's why something as dynamically loaded and complex as Hiba Tawaji's "Al nizam al jadid" which scales like Ravel's endless Bolero to its inevitable symphonic climax came off far better than it should have, from the blistering piccolo flutes to the pounding big kettle drums and crashing cymbals, from the solo to the massed chorus voices and roaring brasses. Getting a first overall impression finished off in the upstairs room.

To check just how close the S400 might work to a front wall, the next location was my wife's studio where the Danes replaced her usual EnigmAcoustics M1. The all-in-one speaker driver here is a 100-watt Simon Lee AIO as the type machine a well-informed Buchardt buyer would appreciate. It would complete an easy-does-it system to deliberately break hifi's misconception that better quality ties to ever increasing complexity. If done with keen consideration for what best plays a given room, a single piece of electronics driving a small but good stand-mounted speaker can be the golden ticket, silver bullet or copper penny.