From mads to nuts. "The S400 was a kind of engineers-gone-wild project which took years to complete because Kasper spent a lot of time on countless wave guide prototypes. The wave guide is this speaker's biggest achievement by far and reason for its success. Wave guides are a very delicate thing. Doing them right is an engineering art very very few master. The only reason Kasper could design us such a perfect wave guide was having completely new measurement technology available. That made our S400 the first production speaker to have been developed with it.

Controlled narrower directivity without the ~2kHz 'suckout' common for most two-ways around the crossover frequency.

"It's a robotic holographic nearfield scanner which takes then processes 5'402 measurements points around each driver of the speaker. This gave us very high-resolution 3D mapping on what happens acoustically to help Kasper test and fine-tune the wave guide's geometry until it perfectly matched how tweeter and midrange interact. That's a unique feature. It also assures that the tweeter's dispersion in the very high frequencies remains wide instead of narrows to beam as is typical.

"Our speaker measures almost the same on axis as it does 50° off. When reflected sound has nearly the same character as direct sound, our brains have a far easier time to process the sound and we are left with a far clearer soundstage and more specific images. Our design also widens the sweet spot and makes them a joy to listen to when you walk about a room. Another benefit of our wave guide is that we got rid of cabinet diffraction because the tweeter doesn't see the cabinet as 99% of all speakers do. That's possible only because we use such a small 19mm tweeter in a very deep wave guide."

Why Buchardt decided on a wave guide over a coaxial driver, "coaxials have one drawback Kasper didn't like. When doing a wave guide with the highest resolution robotic scanner, you see how sensitive a tweeter actually is to even the smallest changes in a wave guide's geometry. Here the contour response of a coaxial driver constantly changes because the wave guide created by its mid/woofer cone constantly moves around the tweeter."

For more nuts and bolts, "most research suggests that what we hear in-room is around 12% direct sound from the speakers, 44% early reflections from the room and 44% sound power from how the sound loads the room. By possessing nearly the same response on-axis and off, the S400 will sound balanced even at extreme angles and in untreated rooms. The new long-stroke aluminium mid/woofer from Ulrik Schmidt successfully damps the ringing typical of such drivers when used into the midrange and it can work in a small air volume whilst delivering very low loud bass. Our wave guide was designed specifically to complement this driver and not the other way around.

"The passive radiator not only allowed us to shrink the cabinet size by 30%, it eliminates port compression, port noise and is more forgiving of close boundary placement. The crossover uses costlier metalized not electrolytic caps and copper not iron coils." 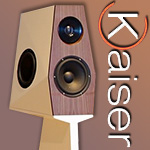 If we revisit passive radiators, we recall that they replace the oscillating air volume described by a port's length and diameter with the tuned physical mass (size + weight) of a cone without a motor. The benefits over a far cheaper hole in a cabinet with a tube stuck to it is better damping for improved performance in the time domain. Passive radiators are quite rare but show up in even very expensive designs like the Verity Audio Lakmé or Kaiser Acoustic Furioso Mini at right. Golden Ear, Fram Audio and the aforementioned Amphion are other brands to use ABR across multiple models. But compared to ported designs, auxiliary bass radiators are one in a thousand. They're not only costlier, there's likely less modeling software available to implement them optimally.

If we revisit our earlier question on how a small Danish brand manages to compete at this level, we must add to off-shore production and direct sales superior engineering that's assisted by the very latest in 3D modeling and measurement gear. That's a very different path from that of the lone guy in a garage who just tweaks something by ear until it sounds right to him. 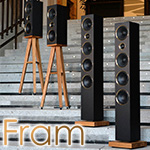 As to how Buchardt will grow beyond their present two models, Mads already had a road map. "The active 2.5-way S400A will have the wave guide on top since here we can do time alignment in DSP.  The now sealed enclosure will be 4cm deeper and use one woofer on the front, one in the back each in its own chamber. These woofers won't have much room to work in so we need to feed them a ton of power with three 150-watt brand-new Texas Instruments class D chips and a beefy power supply with high-quality DSP, a CS4398 DAC in each speaker plus room correction. The active S700A tower will be a 3.5-way with 4 x 150 watts, twin woofers on the front for 17-200Hz and twin woofers in the back for 17-100Hz. This has been under development for already three years. For 2020, we're working on two new models in a new Performance range. The P400 will be a cheaper S400 with an SB Acoustics 6" mid/woofer; and the P700 floorstander a dual-woofer 3-way with four 6" passive radiators."

"As for how we will compete against the giants who already make active speakers, our solution is engineered by a Danish crew specialized in active high-end speakers. It's an OEM platform where we can specify what amps and DACs to use. Some of the most expensive items like approvals, testing, tooling and most the engineering have been done and paid for by them. So doing it like this gets us the possibly best team in the world to do active systems and as a direct-selling company, we will only see far more expensive speakers using the same platforms."

When my loaners were en route, this email arrived. "It's a review pair so not new. It's broken in and if you open it up to look inside which is okay, you'll see that the crossover is not mounted like in production. In this pair I glued the new crossover in as we now use black PCB. Please take a look. Normally the filter boards are mounted with six screws and not glued." Given that we've already seen the crossover with the tan board dismounted, I didn't see good reason to take a semi-obscured shot of the black one now.