Classic big-hall concert sound. That's it. Warm but not humid. Fully developed power zone for an anchored 80-300Hz range which informs the main midrange with downward gravity. Slightly mellow top registers. High dynamic headroom for Maui not Santa Monica swells. That segues back to the power region where bass and drums operate to be a tune's engine room and rhythmic life force. Texturally gentler on the leading edge. That plays down transient blister and incisive edging. Tonally rich which reviewers call 'saturated'. The opposite of pale, whitish or monochrome. Temporally more relaxed than charged. This segues back at slightly softened attacks for more developed bloom and sustain. Density and mass go up. With it pace seems to slow down. That's obviously an aural illusion. Your 4'13" tune takes the exact same clock time. But it's still a fact that nearfield transients and their treble power feel faster and more energetic. 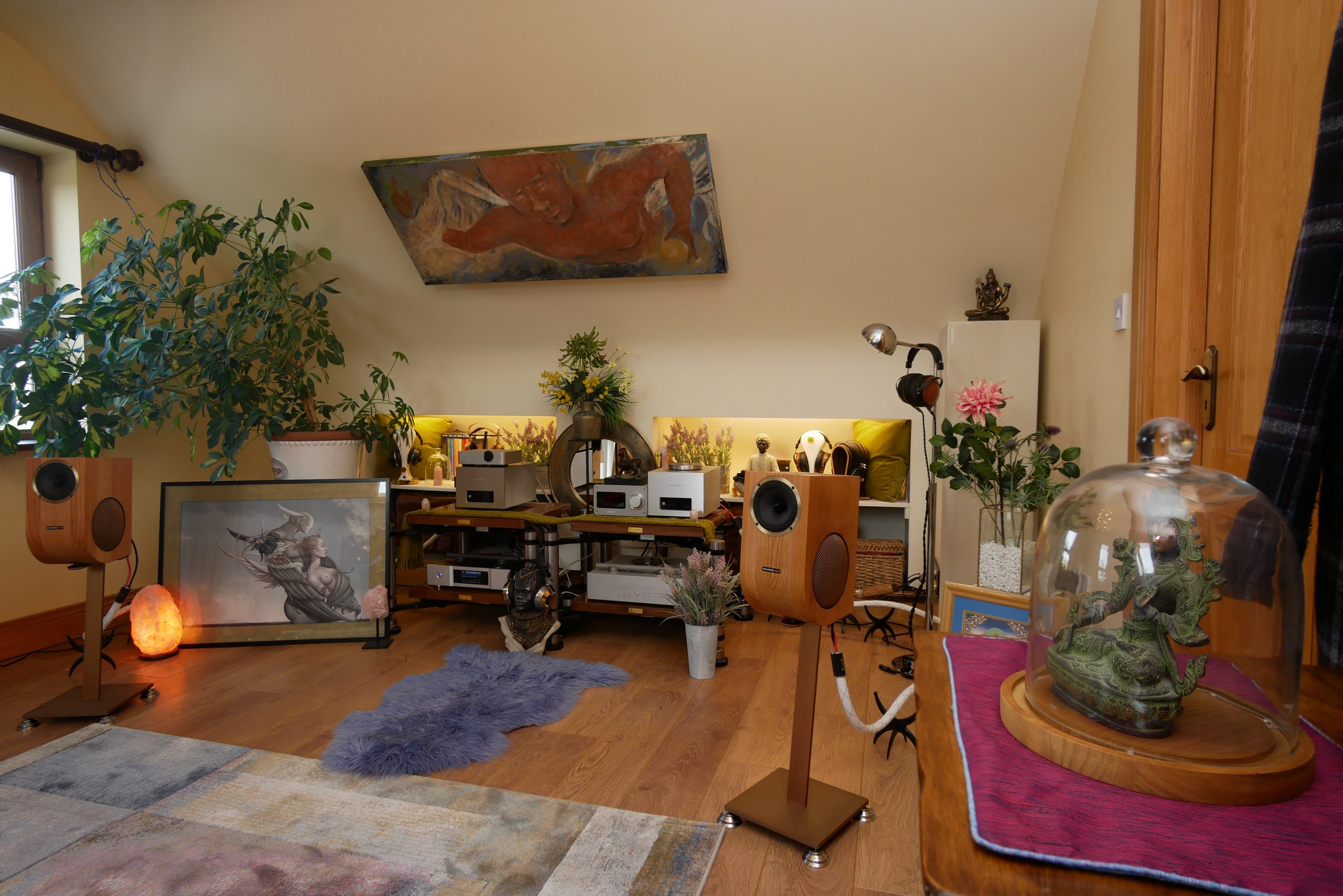 Because rooting for any underdog is so much fun, I parked the P1 atop a 250wpc Kinki Studio EX-P7 monoblock to emphasize its tiny size once more.

A byproduct of Sven's voice is that soundstage specificity, separation and close-proximity image lock all soften. That too reflects a big-hall concert reality in the far rows where orchestral strings swell and ebb like one organism. They don't fall apart into individual players your mind's eye can count. If they did, the conductor would fire the lot. The point of so many strings is to compensate the higher loudness peaks of woodwinds and particularly brasses, not to be multitudes around the tower of Babel. It's simply fair to say that soundstage freaks who enjoy to maximally dial up separation won't go to 100. Sven's own speakers of course are famous for their gargantuan soundstages and layering from ambient rear tweeters and midranges of unusual off-axis response. But the ultra-rez notion of class D as the iron chef of julienned detail doesn't apply to the P1. It takes a few steps back to make room for the sound to first develop an ambiance rather than catching it right as it jumps off a plucked string or escapes the finger holes and reed buzz of a woodwind.

"This man has true grit." Compliment. "That sound has grit." Criticism. Language is funny. Passive noise reduction tech like Furutech's NCF² and the LessLoss 640X Firewall strip away subtle layers of grit and grain. With it can also evaporate a sense of edge, sharpness, energy and urgency. Supporters of noise-attenuating tweaks call said aspects artificial, their removal more natural. Having grown up in a household where three of us played clarinet and two others French horn—the latter two remain busy in orchestras of Hamburg and Wiesbaden—I know that live music has authentic bite and grit. In the orchestra the trumpets sat right behind me, the bassoons to the left, the oboes and flutes one row in front. The closer you get to such sound sources, the more of that you'll hear. The P1's voicing shaves some proximity energy off. If hard-edged gritty fare or the conductor's perspective is your sonic reference, expect it to sound more 'civilized'. Same difference but with possibly another value judgment.

At this juncture, the narrative took a truly gritty turn. "So far a distributor and one of his dealers present me with a dilemma. They say that "for the last 2 years we sold 60 pairs of Boenicke speakers from W5 to W11 in different versions. We are investing in a W11SE+. Hopefully it arrives soon. We are glad to have you as a partner and hope you are happy with us. 80% of your speakers sell with electronics like Naim, Devialet, Moon and Pass amplifiers and streamers. We want to be a one-stop shop of complete systems sales and service. At the moment we have three customers who bought Boenicke speakers from us asking for a P1.

"What should I do? If I send them to buy a P1 direct, I'll soon be out of the electronics business. Our customers look for good sound and product at a fair price. If the P1 is a bargain, why not raise the price and let it be a good amp sold by you and your partners? Selling your electronics direct undermines our efforts with your brand. I hope you'll reconsider so we can be partners on the electronics as well. If not, I hope you choose to sell the electronics under a different name. The current situation is confusing for customers and undesirable for Boenicke dealers like us." 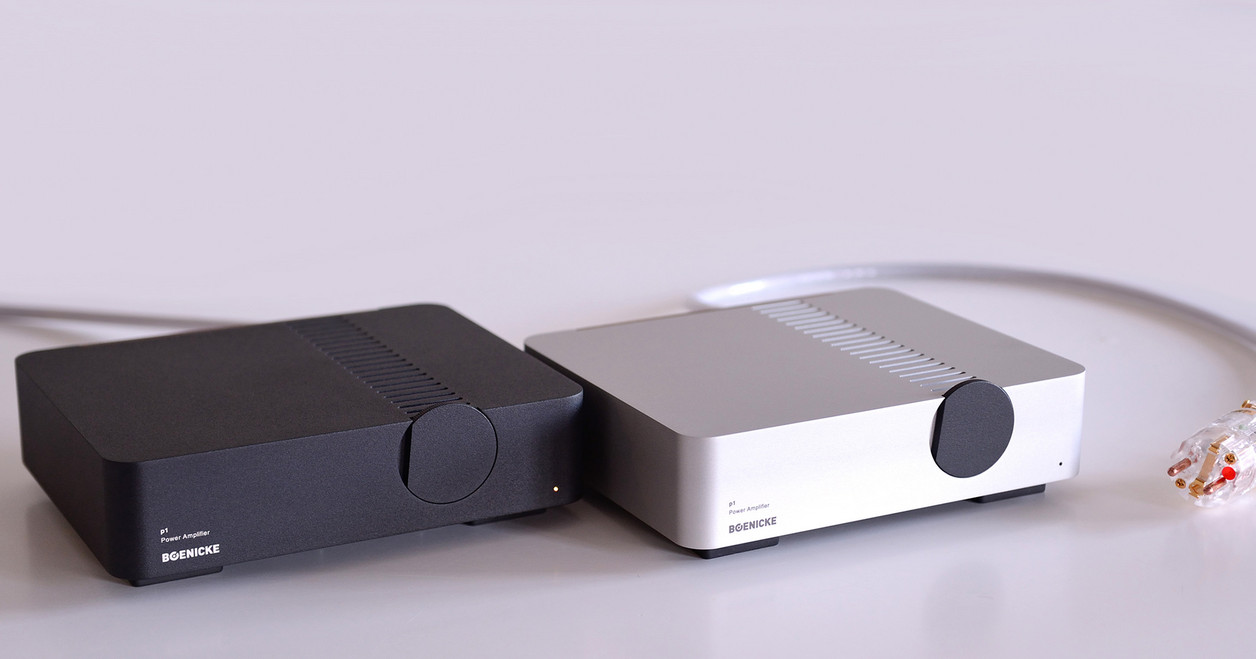 As Sven explained, with double margins for dealers and distributors, the P1 would sell for 7'500 Swiss. The tweaks alone eat up CHF 1'400. One could argue that with a very powerful, perfectly matched small amp sold for a happy direct price, Boenicke clients now can get the speaker they really wanted. Instead of allocating fewer euros to a lesser model/version to retain sufficient cash for a good amp, they can add the €4'800 saved on a marked-up P1 to their speaker. The dealer still makes his money. It just goes toward more speaker, not less speaker plus electronics. In any event, this unexpected turn shows just how difficult it is for any manufacturer to offer their customers the very best value whilst reaching them through dealerships. Operating those has real costs. Profits must be made to survive. In that reality, is selling the P1 direct a facilitator or hindrance? Must it be black or white? Is there a hybrid grey zone that can keep everyone happy? Why would selling the P1 under different branding make a difference when that cat is out of the bag? 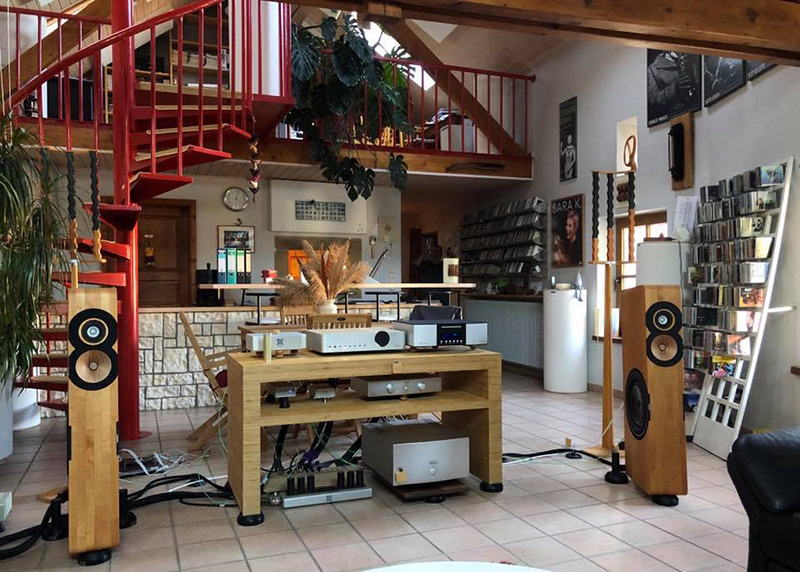 Beyond that still exists the overgrown wilderness of classic but poorly executed SET.

That makes the P1 fuller and richer than our new Kinki Studio EX-B7. Those net a nearly equivalent 250 watts for $3'500/pr. They represent our home's currently most aspirated monos beyond the already quick $8'500 LinnenberG Liszt. And it really is such company into which Sven's P1 belongs.

In this group it's most powerful and by far most compact. At 2'428 Swiss in black, it's also the most affordable to still beat Kinki's PRC and semi-direct pricing advantage. That's very happy days for smart P1 shoppers, not so much for the competition.

If this positioning remains in place—some dealers are grumbling already—Boenicke buyers in particular should look at the P1 as a most decent proposal or inducement. Allocate the funds saved on this amp to an SE/SE+ version of your targeted speaker. We know that Sven's tweaks work. Being outsourced from various specialty vendors, they simply come at a price. Yet this amp includes them as is. Now you might be able to afford your new Boenicke speaker with them, too.

What to drive that speaker with has already been ideally sorted by the man himself. What could be better?