Switching amps are widely known for stout output power from tiny cost-effective enclosures run at minimal heat. Those I've heard were also very solid performers of highly diversified sonic profiles. If you're fond of SET-like sound at much higher power, investigate S.P.E.C. of Japan. If it's primarily quickness, resolution and openness you seek, AGD Productions in the US have you covered. If you want something in the middle, Aavik's Danish address in Aalborg is the one. These audio houses cover pretty much the entire sonic gamut. Their class D amps I sampled competed with class A/AB behemoths where it mattered. They also ran cooler, occupied far less shelf space, were more powerful and nowhere near as wallet intense as my reference hybrid mono towers from Trilogy. Moving on, Sven's OEM circuit of choice comes from Powersoft which he extensively field-tested in his W13 floorstander's active bass system. The trick was supporting that off-the-shelf engine with the usual additives to elevate its audible capabilities to a satisfactory level. So this switching heart extracted from its tiny enclosure filled with multiple exotic bits won't sound the same. That's key. Aavik and S.P.E.C. build their amps around different engines and supportive means but the general approach is the same. Tweak the surrounding circuitry. Enthusiasts not on board can always order a stock module from ICEpower, nCore, TI, Purifi & Co. and mint their own. 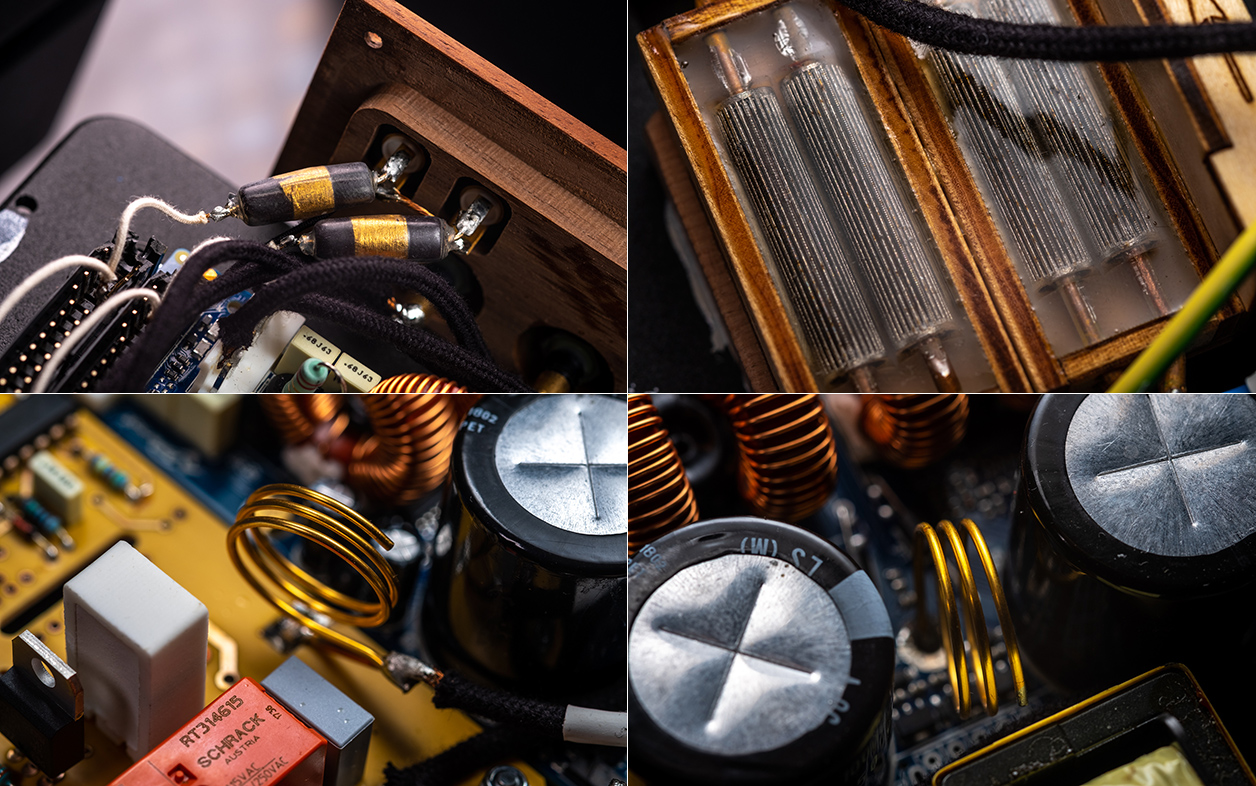 A large partially cut-off disc inside the p1's forehead may look like a stylish volume knob yet is just its main on/off switch. Once turned, it activates a white LED in the lower right corner to show status. The enclosure's seamless cheeks, front and hood form a solid aluminium billet case. Numerous top vents just behind the power knob nicely break up the gently rounded minimalist dress code that to my eyes was very sexy especially in matte black. The underbelly sits on three permanently attached Black Ravioli anti-vibration square pads and connects to a solid walnut rear panel which Sven finds important for sound quality so far superior to aluminium. In that area we also see a pair of costly ETI Research RCA inputs, speaker ports for banana/BFA plugs and a captive 1.5m Chord Shawline AC power cord with its live vein marked. Customers should pay attention to correct power polarity or sonics will suffer. This cord is 10% silver-soldered to the internal board to avoid redundant IEC connections. All in, that's enough to file away the p1's exterior as unusual. It takes a particularly inquisitive mind and know-how to pay attention to such detail but I expected no less. Small yet meaningful things beyond the scope of competitors are the man's specialty after all. His choice of binding posts and RCA spacing were my only real nits. My cable sets all terminated in spades so would welcome taps which accommodate them. This wasn't a deal breaker since my trusty adapters did the trick. As for the inputs, those ought to be separated by at least an extra 5mm. LessLoss C-Marc's wooden chucks were far too thick to fit and even the ETI plugs of Boenicke's own IC3 CG barely made it.

The p1's heavily tweaked chassis promises noise-free drive, its internals still more so. Here we see LessLoss C-Marc wiring and three latest-gen Firewall filters on each AC leg. These highly efficient noise-rejecting barrels already work inside my W11 SE+ floorstanders and sound|kaos Vox 3afw monitors and I even use their external version. The FR2 circuit board houses a custom-made AC soft-start module while small Bybee Gold Slipstream Quantum Purifier bullets install on the audio inputs. Refine Audio's orientation-optimized fuse treated with contact enhancer oversees safety. The p1 also features three of Sven's proprietary resonators (16cm parallel and series spirals plus the latest 2cm in series) outsourced to Volker Bajorat who tunes them to the same frequency within micron-level length. That German engineer also preps all PCB by removing all 90° angles and trimming their edges to exact resonator proportions. Sven orders his lacquer-less Bakelite boards with gold-plated traces a touch oversized so they end up as intended after Bajorat's treatment. Now let's find out how all these ministrations translate to sonics. 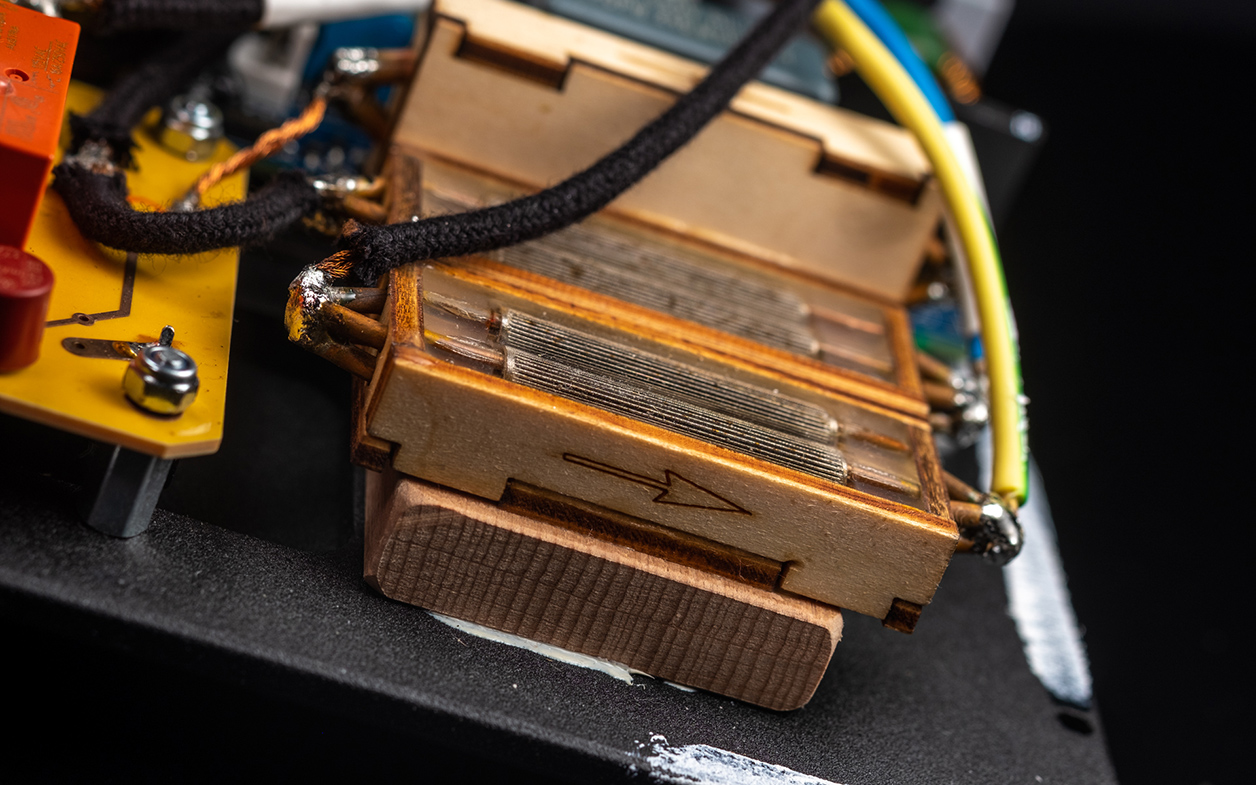 As usual, an Innuos Statement streamer sent data to a LampizatOr Pacific DAC connected to Trilogy's 915R preamp. That simultaneously served the p1 loaner via Boenicke Audio IC3 CG RCA and Trilogy's 995R monos via XLR both constantly engaged. After each swap I just had to reconnect speaker cables and adjust volume on the preamp by 7dB. Boenicke's W11 SE+ were ideal loads for today's gig. They're less notorious than their W8 siblings yet still no easy types to drive. Since the p1 is tailored to complement Boenicke speakers, some comments on those won't hurt. I reviewed the W11 SE, owned W8 and W5 with silver Fountek widebanders and now have W11 SE+ and W5 with these drivers upscaled and in white. All Boenicke speakers are insensitive low-Ω types fond of muscle amps with low output impedance for high damping. Although these properties keep a connected load well controlled and aren't unusual by any means, I find them situational and counter-productive every now and then. Purist widebanders rear-loaded by folded horns fronted by a bossy amp for example will produce shallow dry bass while Sven's designs held captive by such hardware become staging monsters that slam hard, are very agile and fully turned on upstairs. Let me stress that his speakers thrive on power with high damping so just the stuff class D amps excel at. The p1 is no different. In fact, its high mechanical compliance with my speakers was a given long before my auditions. Had it been a 10wpc type with OTL-like output impedance, this review would have been stillborn considering the speakers at my disposal.