Another Blumenhofer design signature is the octagonal cabinet cross section. Its facets and narrowing sides weaken internal standing waves and chamber resonances. The attendant thinking is that multiple smaller resonances are better than a single dominant peak. Also typical Blumenhofer is a down-firing port. It's not a standard pipe but wooden tunnel whose specific geometry is said to be sonically advantageous. The entire enclosure is built in Blumenhofer's own wood shop in Walkertshofen near Augsburg and the preferred material for Gran Gioia is 19mm Birch ply. 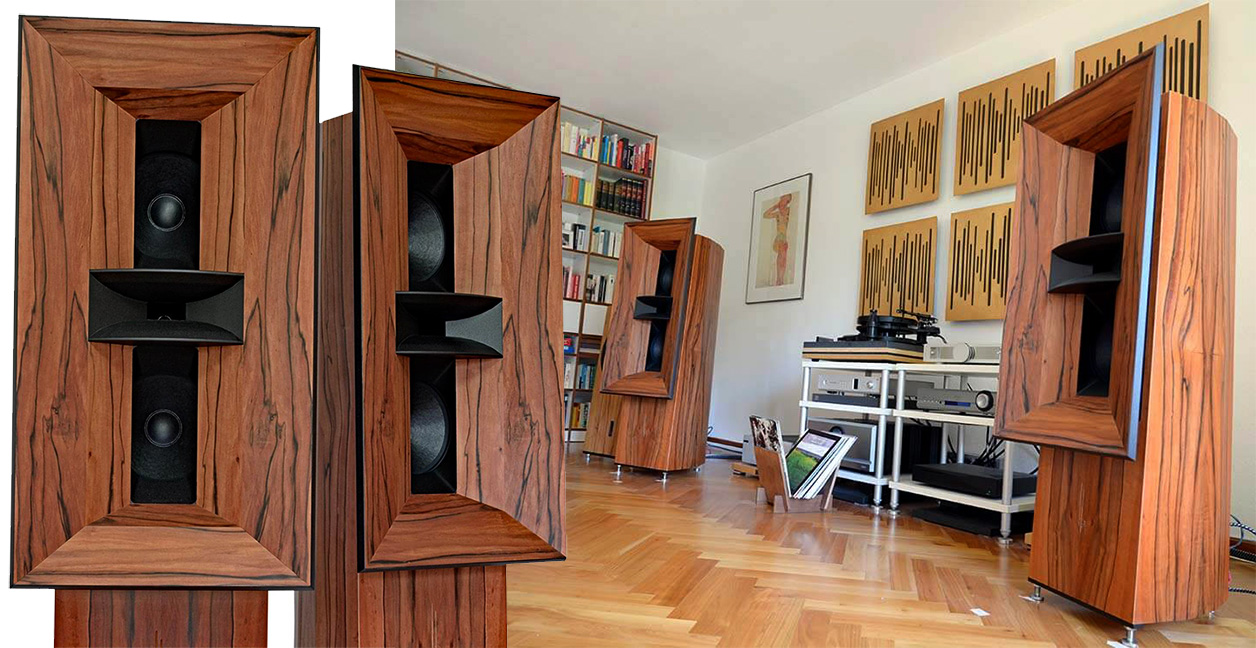 My sonic notes required multiple revisions when impressions over the first few weeks turned out to be just intermediate snap shots. That was merely logical. Acoustic horn gain means that even at high levels, such drivers barely move. That reduces distortion particularly IMD but anything which moves little must train longer. It thus took me six weeks of 'constant' play until no significant further changes registered. Let's kick off with a hifi myth. A typical audiophile exchange of "I just bought a hornspeaker" has a friend counter with "ha, not for me, that's far too colored". Really? Strange indeed. Whilst most hornspeakers I've heard did show tonal tendencies just like any other speaker would so no more pronounced, I never encountered nasality. Perhaps 20 years ago I might have and ongoing crude DIY projects could continue to suffer it but it's far from 'by design'. My colleague Frank Hakopians didn't hear anything of the sort with a recent assignment of Acapella's €49K High Cellini either. But the myth or fat lie just won't die.

Blumenhofer's Gran Gioia 2×10 is really the Bavarians' most 'studio-approved' design I've encountered even if staring at an enormous wooden funnel from the proximity of a recording console wouldn't be. But I heard zero tendencies, just one seamless continuity from the mid bass to the extreme treble. Unlike my Genuin 1, there was no minor upper bass/lower mid emphasis, no extra dose in the presence region. Nothing in the airiness zone was damped or boosted. I heard the grand Blumenhofer as textbook linear. That said, I suspect that some horn naysayers would prognosticate a small upper-mid emphasis. That'd be a misdiagnosis. It'd misread dynamically uncompromised impulses like plucked strings, hammered piano and percussion for tonal brightness. That's wrong. Otherwise non-transient sounds in the same bandwidth would have to express the same tendency into the brighter, clearer and more present. They don't. For all their extreme articulation, male and female vocals suffered no coloration. Take the duetizing of Isobel Cambell and Mark Lanegan on Ballad of the broken seas' "Come walk with me". He sounds fashionably inebriated, cracked, kaputt and dark, she ethereal, wispy and come-hither. He neither gains nor misses in sonority, her breathy whispers don't change. By contrast, my Genuin 1 Mk2 is a bit thicker down low, a bit less open and free on top.

The urban myth continues with "strings and particularly massed violins are impossible to get right with horns!" Here the Gran Gioia excelled. I usually don't cue up things like duoW's Entendre but the big Blumenhofer really impressed with so closely tracking a cello's and violin's tonalities. Did the latter feel incisive here and there? Quite. It should. If you insist on constant softness, you've not heard a live violin in far too long. I have. My daughter practices on one. Now attentive readers remember. A few paragraphs ago I wrote "from the mid bass…". Hello trade-off inherent in a full-horn concept which unlike the coloration myth isn't outdated. Personally I was perfectly happy with the claimed and actual 35Hz reach. Yet more money and size like a Focal Maestro Utopia Evo will add the full first octave. Ditto active options like Ascendo's ~€27'000/pt Live 15 whose 15-inchers fronted by a kilowatt each certainly go lower. As a passive, flat to 16 Hertz would demand a lot more and certainly not want horns if still rational size counts. Blumenhofer had to balance sensitivity and reach. Proponents of max extension would combine a mid/treble speed-freak horn with a standard bass system to go boom but always too late. Blumenhofer's insistence on time coherence prefers some losses in the lowest octave which with normal music and standard rooms rarely factors in the first place. Then his Gran Gioia exceeds the Ascendo if you prioritize resolution, mid/treble sex appeal, timbre realism, presence, micro dynamics and depth layering. It's why an amp/2×10 combo will also cost you about twice what the Live 15 gets… but buy you more dynamic verities.