14 extra cycles with 6+8. Bigger cone surface didn't need class A beefing up for our big rig's usual speaker placement. That's ~3m from the front wall, toed in face-on to minimize room intrusions. Now 200 watts of DC-coupled fully balanced class A/B Mosfet laterales with 1MHz bandwidth fronted N°68 for max resolution. Not even secretly did this dream of any sub fill. To successfully tack on a sub, I'd need a steeper slope (+36dB/oct?) or lower filter hinge (30Hz?) than ours has to avoid unwanted overlap. For some virtual Grecian sunshine glittering on calm blue waters across a hidden bay on Ægina island, I spun up a virtuoso bouzouki ode from maestro Manolis Karantinis. His shimmering tremolos and metallic arpeggios reminded me of a Russian balalaika orchestra, by way of the Greek Orthodox church perhaps? N°68 managed the often uneasy balance between naturally sharp string bite and artificial brightness quite well even if, as before with the Bakoon, it erred on the side of a subtly leading treble. One neither wants the bouzouki's inherent fieriness toned down nor turn its metallic shard aspects into rusty grit. The LinnnenberG/N°68 combo leaned a bit into the forward, feisty and fresh. I'd call that remnants of the studio monitor aesthetic. To domesticate it, I'd switch to the warmer less lit-up Pass amp. Easy.

Still in a Grecian mood, I followed up with juicy vocals from Tolis Voskopoulos, shiny Matia Feggaria on backup. "Galanomata Magissa" became the perfect personal soundtrack to transport me back to a small Pomos fish taverna on a pebbled Cyprian beach. The tautly sprung rhythmic undercarriage for the tune allows the singer to delay against. That interplay had obvious tension for properly effective timing. The chorus vocals expressed that celebratory sauce which makes you feel like being on a happy vacation. That relies on sunny tone colors and rhythmic vigor which this system expressed to a high degree. Here not being bedeviled by a high-pass midrange filter often gives two-ways a distinct advantage. Now the tune could express believable machismo.

To change milieu into the dreamy heavily reverb-enhanced…

The extra driver inches weren't just for bragging rights. They came to the fore to prevent turning the grand instrument into a chamber upright. They also factored big on… 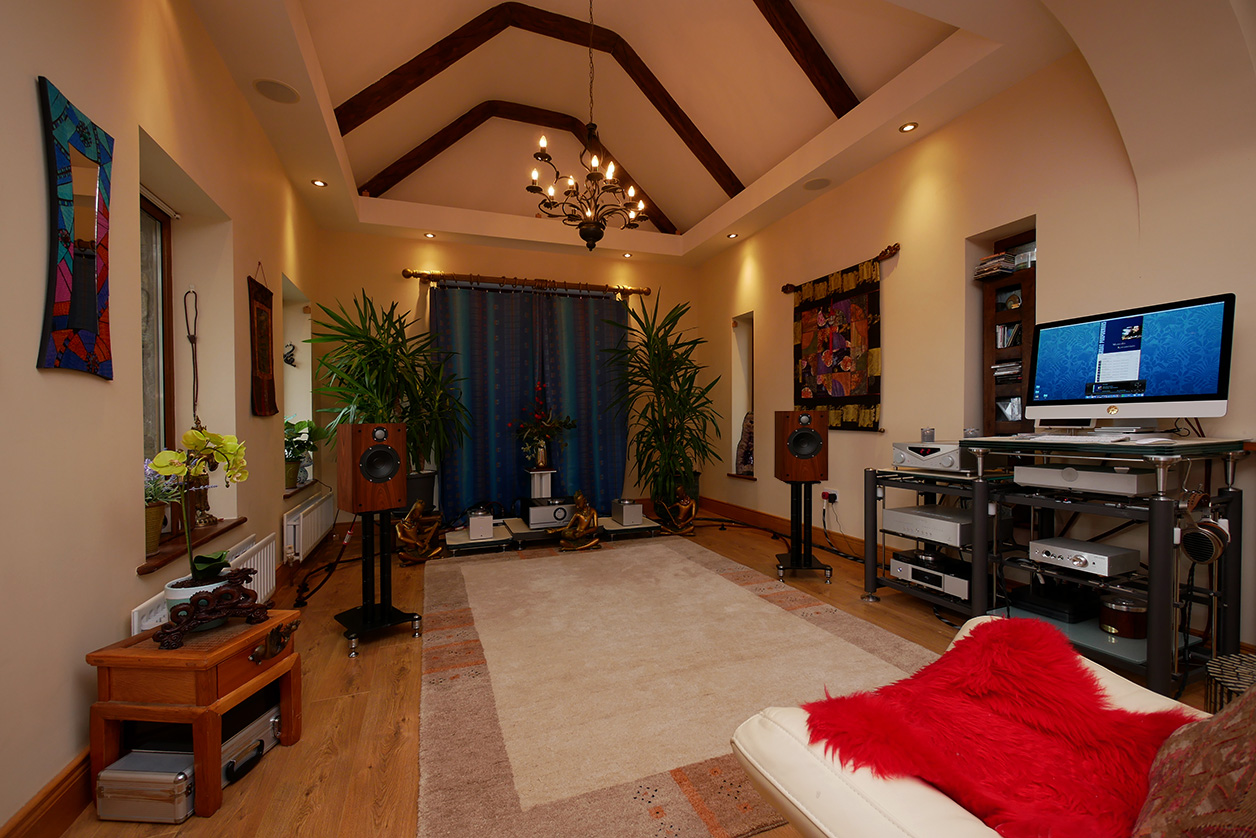 … Kayla Scintilla's "Neo India" from their Remix Archives Vol 1. Edgily angular electronic sounds with instant rise times, bell-like crystalline rings, shuddering bass punches and panned effects all set up a grand artificial patch work of programmers' trickery. Going shockingly low, loud and very briskly sorted again showcased studio-monitoring chops without relying on electronic crossovers or active drive. These mixologists enjoy very dense layers like an aural form of pointillism one has to stand away from to properly make out. N°68 was terrifically sorted and made out. With such fare, I've no idea what it is supposed to sound like. But I can certainly tell whether gear makes more or less structural and detail sense relative to our domestic resolution reference, Raal Requisite's SR1a off-ear ribbon headphones on Schiit's wide-bandwidth Jotunheim R amp.

N°68 made a lot of sense. Which becomes the defense's perfect closing argument for today. If your amplification runs on the warmer sunnier side and is heavily muscled, Franck's two latest miniatures go where experience tells you they really ought not to. They do all the things typical for stand-mounted monitors but add unexpectedly mature and dynamic bass registers that do not feel artificially bloated thus discontinuous or elephantine. It's what makes them great yet clean linear fun when it's out with dainty chamber music to head into the gnarlier industrial zone where different noises do the sound painting. Bring on anything expansive, boisterous and structurally intricate, then watch these monitors handle it with down-low linearity, bandwidth and very high separation powers.

These Parisian double digits have big responsive engines stuffed into the smallest possible lightweight frames. That makes for bona fide spunk and guttural vroom. Just run them on richer gasoline so you won't derail in challenging corners because the upper half of the bandwidth wants to lead with its slightly fresh tweeter. Good class A will keep this rubber firmly on the road. Now can I have the keys back for another spin before these are due back in France?