Shoe not shadow boxing. Pumped up by a total of 40 no longer 4 push/pull and now class A-heated Mosfets in our Pass Labs XA-30.8 fronted by direct-coupled Elrog ER50 triodes, my size 43 loafers were loafing no more. 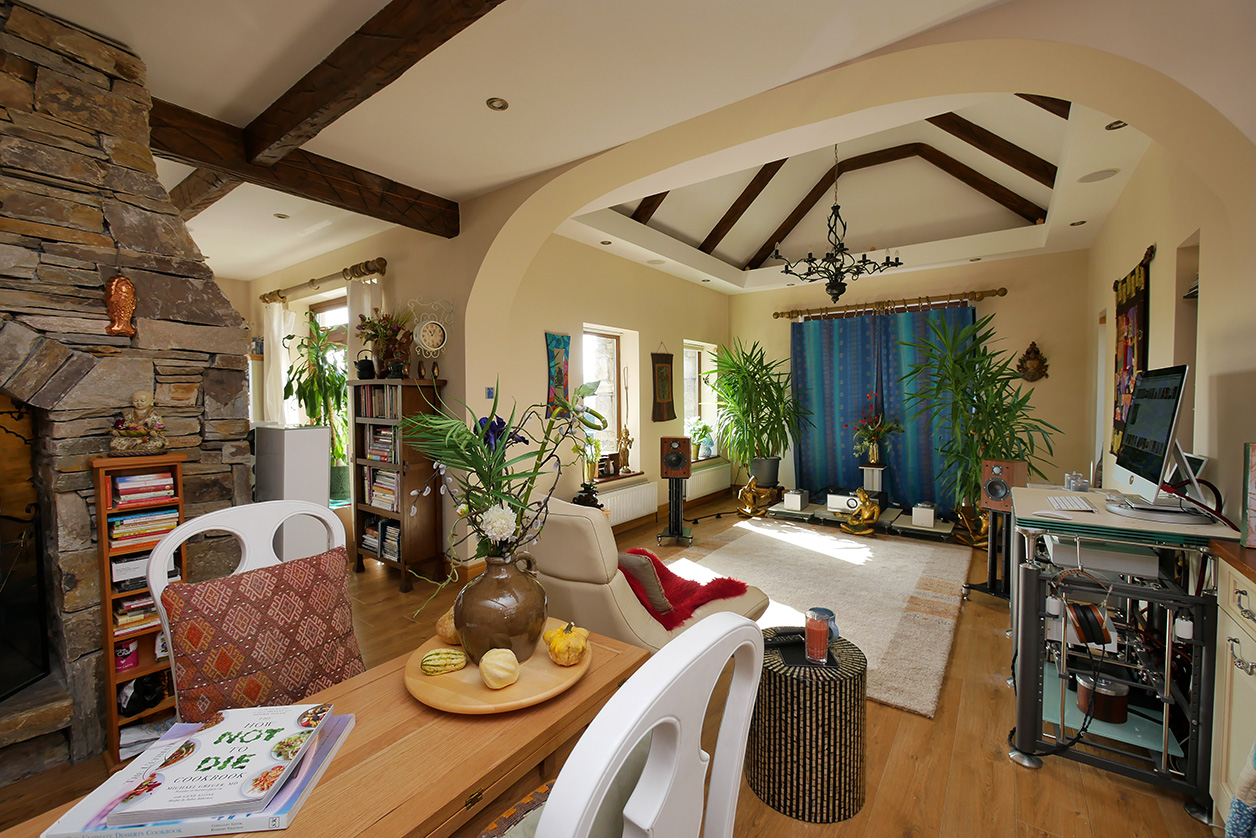 They were laughing all the way to Tom Vedvik & Martin Tillman's "Trans Mojave" whose room-filling bass nodes created a properly deep foundation for Martin's electrified cello. Similar fun was to be had on Nitin Sawhney's Migration and Mercan Dede's 800 albums. The old big-amp-on-small-speakers rule had shown up for work. It's not exactly popular with the Bonaparte belief in needing big speakers to get big and ballsy. Cross allocating hifi funds in this manner requires far more self confidence. It relies on a shrewd assessment of what a given room really needs; and a lucky draw like Franck's small boxes which scale up out of normal proportions.

We should really call them 2.5-ways whose half way patches in not with an electrical but mechanical filter. It's simply the swaggering small cubic volume which seems to contradict what's possible once we goose it with a muscle amp. But I had that mother goose. So normal briefly became seriously abnormal before settling back into a new normal – though it's clearly not a story for audiophile children who don't think for themselves and refuse to experiment with non-conformist approaches.

Small-woofer'd bass without typical room interference of overblown ports sounds quicker, cleaner and more articulate. It won't have the same oomph but in turn not trigger boom. One must still be pretty green to mistake boom and its follow-on debris for quality. With the 20/20 rule of the Hz/kHz extremes, there's simply too much confusion over how low average bass really goes. For most music, 40Hz at 5dB down will sound fuller and more extended than the average spec-driven shopper suspects. Clearly that shopper won't be the N°56's usual suspect. For it, more experience is needed to signal that it just could occupy all of our personal needs' footprint without leaving any blanks. It's why a few photos and music samples accompany my comments. A few actual references are needed to cut through basic misconceptions. 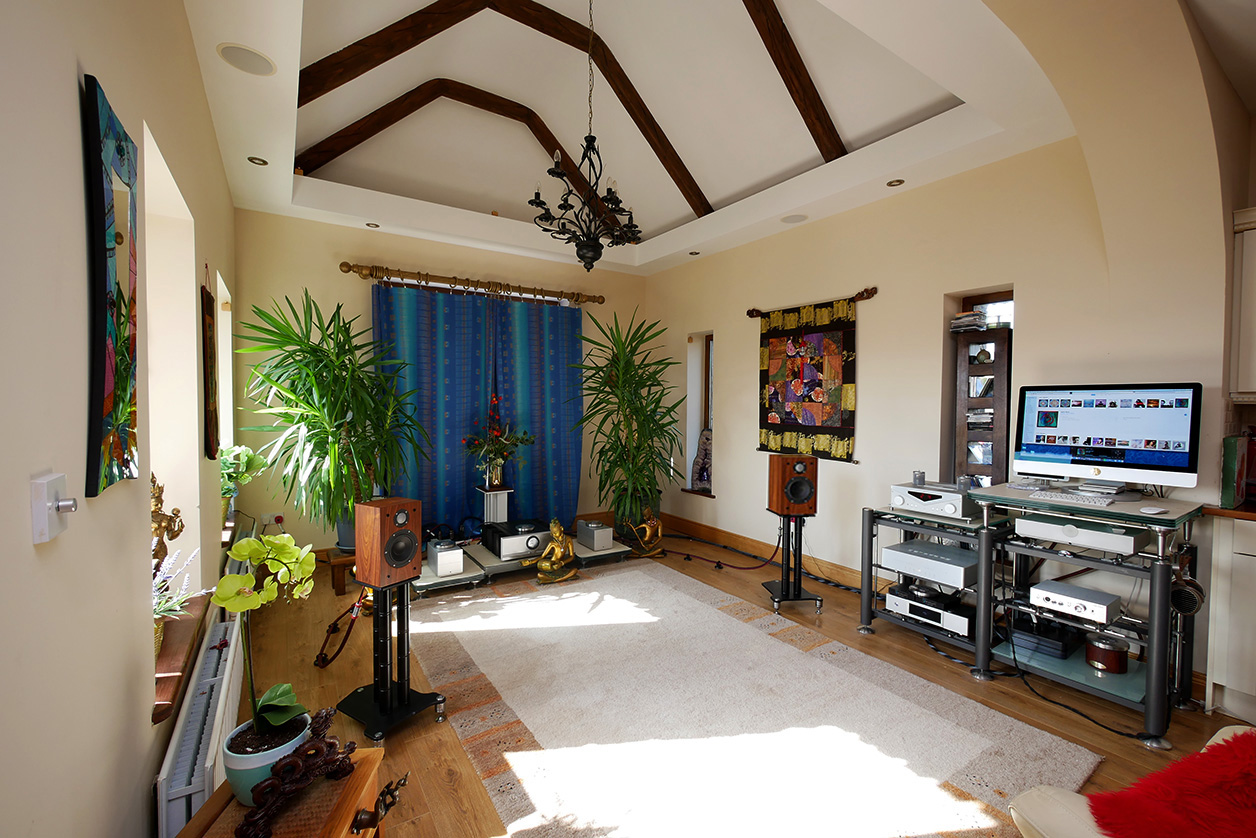 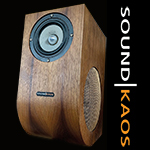 When driven by the €6'500 Pass amp, the smaller Avantages in this open-ended room would be sufficient for my musical needs 80% of the time. For the other 20%, I'd borrow the Zu sub from upstairs and add its 12" woofer low-passed on a 4th-order filter at ~45Hz. I find it superfluous to question how much is psychology versus ears when compact speakers out-stage larger boxes. Why analyze our experience? Hifi is all about being tricked and falling for it hook, line and sinker. We want a suspension of disbelief which overcomes the glaringly obvious. There are no musicians in the room.

Fewer reminders on where our sounds originate; less apparent double trouble, of big boxes taking up the same space our ears tell us is occupied by musicians…it all helps even if it's just psychology. Can we eliminate it from the listening experience? Isn't it an inseparable part of us? If so, why not play to rather than against it? More than anything since Martin Gateley's diminutive 4-driver 3-way sound|kaos Vox 3, the N°56 did just that. It cast a wall-to-wall stage whose center images hovered in front of the silk flower bouquet, so significantly higher than the speakers' upper edges. The music seemed to exist unusually separate from any actual sound producers. If you fancy that freer easier illusion, going maximally compact without drifting into the pale, thin and bleached is very valuable. With its very effective passive bass reinforcement controlled by beefy class A muscle, the N°56 was the antithesis of pale, thin and bleached even without a sub. And it disappeared like a thief in the dead of night. Of course our massive British Track Audio stands looked rather silly and macho but it's what I had. For a permanent install, I'd want something more svelte and elegant. I'd also ask for black bolt heads on the drivers.

The N°68 adds a good ten cycles to the bottom line but only €800 for the privilege. Where/when would the N°56 be preferable? On a desktop, its narrower less deep foot print is far more attractive. How its drivers configure on the front also has the more balanced proportions than the bigger box which doesn't likewise center its array vertically. If you set the N°56 on a console or low boy up against a wall, bass reinforcement quite contrary to my free-space setups makes them sound even bigger. Unless your room was larger, that'd give them the nod as well. Likewise if you own a subwoofer you wish to use. And if you prefer the upper vocal range a bit more detailed if slightly leaner, the N°56 will have your vote too. It's ideal for an upscale bedroom system fronted by say a Simon Audio AIO.