For the next sessions, the signal path converted to front-to-back balanced ending in the Linnenberg Liszt monos to drive 89dB Audio Physic Codex 4-ways. Now the add-on units had a slight sensitivity advantage which played out exceptionally well at any playback SPL. Chief benefits were greater sense of breath, again that wetter richer more developed milieu of burnished tone and again that greater spatial suchness. On good recordings with plenty of venue ambiance, tweeting it super was obviously more resolved. Regardless of production values, widening the palette of tonal hues was the headline act. Unlike copious octave doubling from high 2nd-order tube-derived harmonic distortion, retrieving more of the recorded overtones—bringing them sufficiently up in audibility to not be masked by lower louder data—didn't suffer any of the well-known thermionic softening, slowing or cloying effects. That's when everything sounds thicker, fuzzier and more alike. These super tweeters served greater harmonic truth, not distortion. Between the two kinds, magnesium was the slightly more granular, diamond smoother, finer and simply more potent (also up by 1dB).

By now I was quite certain. EnigmAcoustic's electrostatic Sopranino had finally met its match. But to be sure, I had to first occupy Ivette' studio. It's a cat-free zone where work can be left on the tables and returned to the next morning without bothering to be neat. My wife also doesn't need her music set up in free space like I do. For her everything goes close to the wall as normal households do it. Perhaps that's why magnesium now felt more potent than before. It nearly rendered the switch to diamond a greedy capitalist's exercise in conspicuous consumption. With such early front-wall reflections, effectiveness of 360° dispersion compounded. Whilst diamond was still the more suave and rich, unlike in my prior sessions magnesium return caused no real regrets. And just as affirmative, already the deep yellow dome bested Sopranino. It also looked better—in fact was perfectly matched to the monitor's maple veneer and lower of profile—and cost less than a third (in 2013, Sopranino wanted $3'900/pr). As a monopole planar, Sopranino gives up on dipole radiation where the magnesium Avantage had the all-around advantage. This confirmed Franck's claim that beaming his drivers in a standard monopole configuration was noticeably inferior.

As to how Sopranino was bested, the magnesium dome resolved more harmonic colours which made timbres more distinctive and full. That lived on a different deeper page than mere airiness or ambient restoration. To stress that point, with Franck's add-on super tweeters, desire for wealth of tone substance and color intensity gets satisfied with pure transistors. This bypasses the season-with-tubes route. Being familiar with that, today's super tweeters strike me as accomplishing more. Their reveal doesn't clog up the pipes with ballooned 2nd-order harmonics only to mask the finer higher overtones with their ever shrinking percentage points.

To wrap up, with F6 at 1'397Hz being a guitar's end point whilst a soprano voice's high C6 means just 1'047Hz, the quality of our midrange driver's upper reach and the low end of our main tweeter remain in charge to capture the fundamentals of all the major high tones our music contains.

Once today's super tweeters reach down into their domain, they're at least 18dB down in output if not more. This won't address the minor opacity of a Zu Druid's big 10.3" widebander's top. It won't change the fact that Kroma's ¾" Hyquphon soft dome isn't as resolved as Albedo's 1" inverted Accuton ceramic.

The domain of our super tweeters are the upper overtones inside/above the fundamentals (the chart just shows the first six harmonics). Depending on the instrument and player, their relative loudness differs to become the signature timbre or artist's tonal fingerprint. But they will always be just a fraction of the fundamental's intensity. From that follows that as our playback levels reduce, the finest of those harmonics begin to fade into the noise floor of our room and system.

Adding the Franck Tchang omnipolar units for full-space radiation increases the level of these finer harmonics. Now they matter more. The benefits are many. First, tone colors intensify. As such, the bandwidth of timbre differences widens. With more gradations of hues, four singers in unison sound more distinctively like four different voices. This leads to our second benefit, better cognition or intelligibility from better separation and identification.

Better separation turns into the third benefit of superior soundstage sorting particularly when things get complex to risk congealing or clumping up like wet cat litter. Superior sorting leads to the fourth benefit, more specific image localization. This apparently has to do with better defined transients because now the marker of the fundamental is accompanied by more additional markers of coincident harmonics. The more of the finer parts of a tone we can hear, the clearer we note its precise beginning, hence location.

A fifth benefit is that these super tweeters significantly delay the gradual disappearance of the most subtle harmonics below the threshold of our hearing as we turn down the volume. We can listen more quietly without having things drastically dilute, get thin, pale and whitish. Here goes another bumper sticker – super tweeters for hifi whisperer. 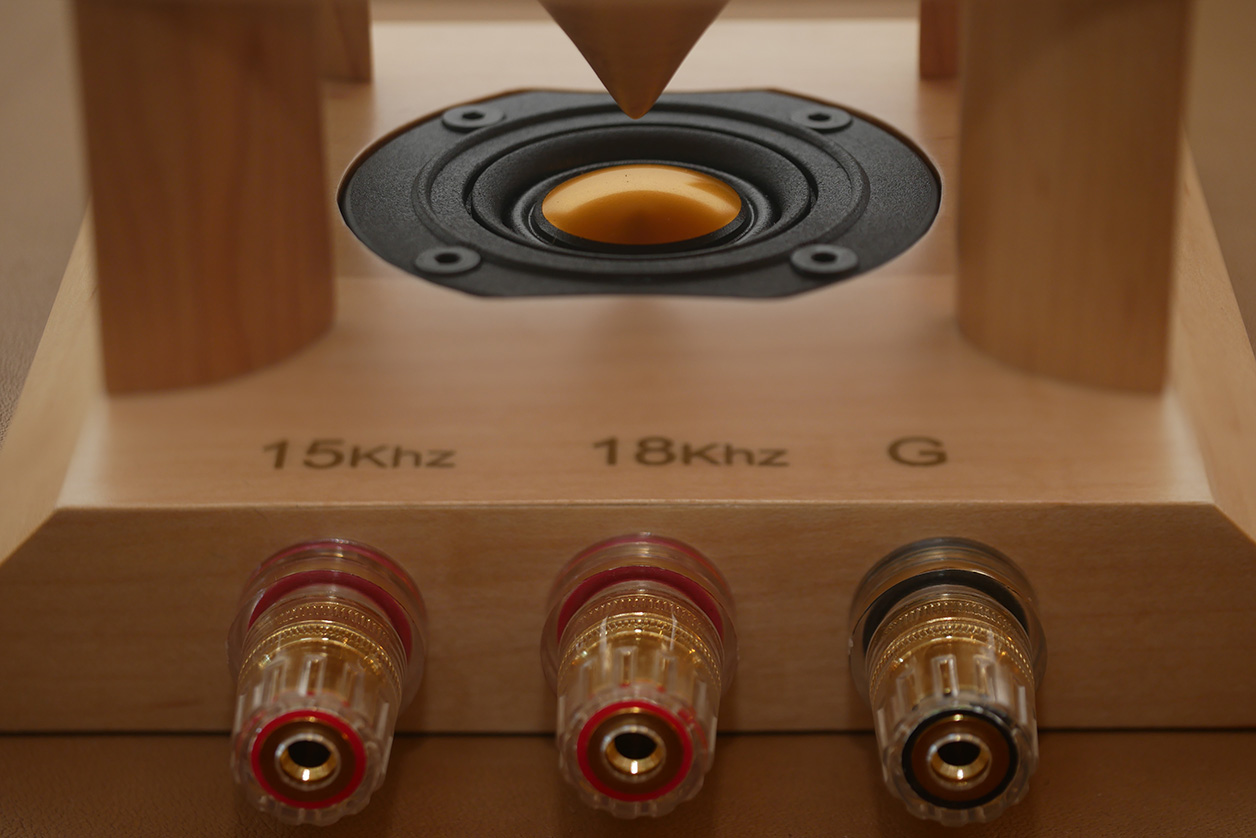 The only competitor to the Avantages I know of is Elac's 4Pi Plus.2 omnipolar ribbon super tweeter which 5 years ago sold for €2'098/pr. That design's advantage is its 5-step gain switch covering +4dB to -4dB to adapt to a speaker's sensitivity. The French domes are fixed at 90dB/magnesium and 91dB/diamond. As speaker sensitivities fall below that of these omnis, the latter's effects increase and vice versa. Particularly for people who, by preference or circumstance, must always listen quietly, a small strategic super tweeter boost is most beneficial. Now an 88dB speaker could be ideal.

Because the entire 'magic' of these devices revolves around making audible extremely low-level data, an additional boost comes from closer wall positioning and sitting to benefit from the front wall's first reflection before it attenuates too much over distance. This "harmonic gain" offsets a bit the lead which the diamond cone has over the magnesium. Forget all the nonsense that hard domes sound hard. Those which do aren't hard enough to break up at 22kHz and cause audible 'metallic' intermodulation distortion. The Avantages magnesium dome upshifts the first resonance mode to 35kHz, the diamond to 75kHz. The harder/lighter the dome, the softer and smoother it sounds. With diamond domes enjoying a 40% reduction of 2nd/3rd-order THD product over sapphire, we get the cleanest purest possible high frequencies inside the 20kHz envelope we can still hear.

To conclude, I already knew that super tweeters weren't just hokum to push on needy audiophiles who believe outlandish claims in their earnest quest for better sound. We'd acquired the EnigmAcoustics Mythology M1 monitors with Sopranino super tweeters after their review as my wife's favourite speakers ever. I'd also heard Elac's ribbon omni when still in Switzerland. I was sold on the 360° concept for the high end already back then. But five years are a long time. I'd forgotten the actual experience. In hindsight, I also doubt that those were as potent as particularly the French diamond of 2019 is.

It's curious. Prior to his career in hifi accessories, electronics and loudspeakers, Franck Tchang worked at the Parisian diamond exchange. Did he ever anticipate that he'd return to the diamond trade after retiring from it those many moons ago; in audio no less? Be that as it may, if it's more authentic vibrant tone you're after—that Jabob's ladder into the sky of fine upper harmonics—the two Avantages Audio models of add-on omni dome tweeters deserve your full and undivided attention. Make one of them a Valentine Day's gift to your love of audiophilia? Your ears would thank you.