But this is so not about the silly argument that playback can clone live music. It cannot. This is only about greater overlap on a few key points like not suffering a typical sweet spot; not suffering progressively narrowing dispersion with rising frequencies; of engaging more of the ambient field like real musicians would in your room. The microphone, mixing and mastering decisions embedded in our music still cause irreversible differences over attending a live concert, never mind the ludicrous notion of using just two speakers to do it with whilst eliminating all visual cues. César simply inched closer to making the desired illusion come off better if one's reference is live music. That's because it had a few more very fundamental things in common with it than is the norm. 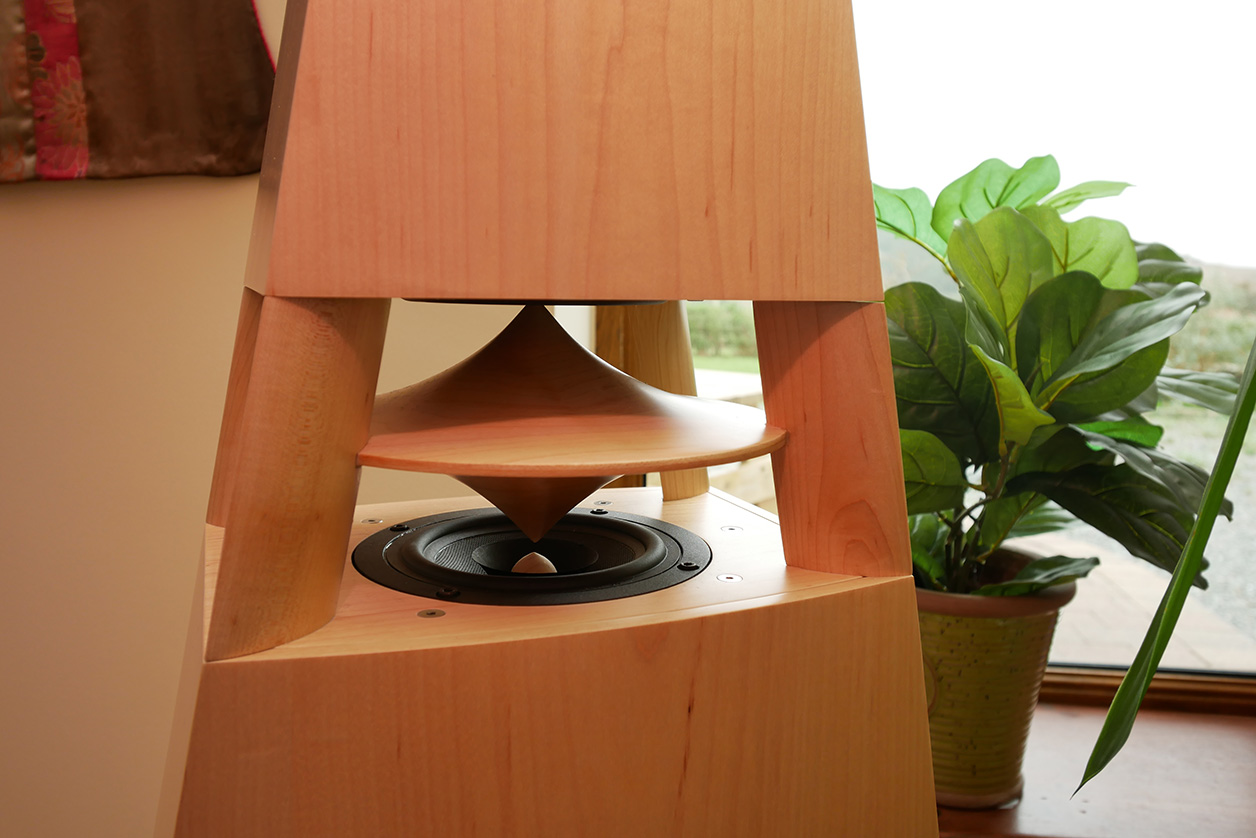 To extract, César's key selling points, in most likely sequence of noticing, should be:

Thinking folks could envision 60° dispersion for a standard 1" dome tweeter on a vertical baffle beyond which César adds a whopping 300°. Wouldn't that put 5 x as much treble energy into the room to equal brightness? Some past mbl demos did indeed strike me as bright. César did not, by any stretch. Rather, its top actually was slightly mellow. The 15kHz/1st-order super tweeters added only faint attenuated whizzer fill in the 3-6kHz range where most the treble action occurs. Meanwhile the entire bandwidth down to where also other speakers begin to radiate into full space matched the omni dispersion. So the treble wasn't at all set apart or moved forward. Bass to 30Hz held up the opposite end with proper counterweight for no upshift of tonal balance. With parallel filterless widebanders, César presents a proper midrange-out perspective to not do it bottom up or top down. With that regal name, I'll call César King of Tone for what is the most unique selling proposition. Very much unlike the real Julius, he is also a socialist. He overthrows the dictatorship of the solitary sweet spot. Once again Franck Tchang has minted a unique concept that's not just different for the sake of difference but serves a demonstrable purpose. Key is a proprietary AlNiCo 5-incher which reportedly spent over six years in R&D. Unlike single-driver brands, it's augmented by a stout woofer and, optionally, a super tweeter. Then it doubles up in the middle, turns all of its drivers horizontal and aims them into flying saucers. Does that make for a concert hall in your living room? It really does capture the overall gestalt. We who are about to A/V salute you.

If you're audiophilicus videus—a normal multi-tasking user who does video and audio with the same system—there's nothing better than an omni. You won't need a sub for special LF effects, no center channel to keep dialogue on not off screen even in the cheap seats well off axis. Whilst we know that all direct radiators can be set up just so for the single listener, trade-show demos remind us. Outside the optimized center seat/s in the right row/s, things begin to deteriorate. Not with this one. César is a speaker for the whole family.