If you want an omni that's not Elac's circular ribbon at left; and if you want a single driver not multi-paralleled vertical arrays like Raal did with ribbons and metal cones for their Eternity omni at right; the top hat with inverted reflector is really the only way to go.

In the next photo, we compress a time line of numerous years wherein Franck's earlier Tango evolved to our present César crowned by the optional tweeter. We also spot the wooden phase plug of the lower widebander; and Franck's resident wall treatment which features a number of sugar cubes and resonators in a vertical line.

Here are some of Franck's treasured guitars. When he says he knows the sound of live music, he really does own multiple in-house references, never mind his various gigs and studio experiences.

To recapitulate today's hero in competitive terms, we'd again invoke Duevel [left], then add German Physik [right] and soundkaos plus cast a quick glance at mbl [below]. Obviously shared with Duevel are the dispersion lenses. Less visually apparent is overlap with omni speaker house German Physik. Yet like Franck's but unlike Duevel's, their Ohm Walsh-derivative driver is a widebander that's good to below 200Hz but hits a full treble without add-on tweeter to eliminate a filter where our hearing is keenest.

Paralleling the new Vox 3 from soundkaos is Franck's bespoke small Alnico widebander. Like Martin Gateley did with Enviée, Franck had to pursue a custom unit because the market offered nothing suitable. Our sideways glance at mbl acknowledged another omni, albeit with tech which requires traditional 4-way segregation of the audible band; and rather low efficiency to demand high power.

This small exercise meant to demonstrate how César combines ingredients we've seen here and there at least once before but then does so in a unique mix. With how overcrowded the speaker sector is, still doing it unique is very hard. Given César's full-range brief, of special appeal to home listeners is that Franck's choices resulted in an unusually elegant compact structure and a benign load which doesn't lock us into hulking amplification or cheap class D.

Too many speakers forget that they must coexist with real-world homes. Whilst they might sound terrific, regular punters can't see themselves actually bringing them home. César only asks that you enjoy fine wood veneer. For now lacquer skins like these competitors do aren't on the menu. But those visually cohesive optional super tweeters are which the other guys don't offer. In fact, one needn't be César to benefit. There's a standalone €980/pr version with magnesium-alloy dome (90dB, 15kHz/18kHz selectable high-pass, response to 35kHz) and a luxury €5'800/pr pure not plated diamond dome option (91dB, same high-pass filters, response to 75kHz) in the Maple or Walnut finishes of the speaker. These units will top any other speaker of approximately matching sensitivity.

For the most subtle of branding, there's an AVA for Avantages Audio logo on the top plate which you'll only see when standing up close. 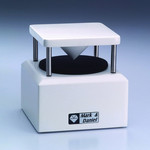 As the website puts it about the real power behind César's throne, "Franck Tchang is … a guitar session player with instruments of his own design. Expert of precious metal alloys and their acoustical properties. Dark horse of audio whose acoustic resonators at first met applause and ridicule in equal measure. Applause came from highly satisfied customers, ridicule from those who refused to attend his demonstrations but invoked existing theories to prove how these devices couldn't possibly work as claimed. Whatever Franck Tchang pursues, he does so on his very own terms. He is intuitive and relentlessly curious. Impossible is not a term that should be in the vocabulary of any real inventor.

"Formal engineers, architects and acousticians have begun to acknowledge his skills. As more such collaborations formalize in the future, Franck Tchang predicts many new applications for his technologies. To date, it's been primarily audiophiles who have enjoyed the fruits of his labors. He works on air turbulence and compression effects. 'Sound is a natural feedback mechanism for the invisible behavior of air. Some audiophiles have trained themselves to hear subtle changes in the sound. They appreciate the specific benefits which my acoustic system approach gives'."

On December 23rd, Franck's email announced that my loaners had been built. He only had to get the production shipping materials to dispatch them to Ireland; and put a few weeks of break-in on the drivers. Having heard and reviewed his resonators, cables and Tango R speakers, I was looking forward to this assignment. It had been quite a few years since Franck's name made the rounds through the audiophile press on a regular basis. It was time to set that wheel in motion again. He's far too clever a designer to be allowed to fade into oblivion just because he doesn't come out with something new on an annual basis. But besides César and the super tweeters, Franck teased "more surprises to come this year".

A few months later, "I just was in Arcachon in the south of France for the official unveiling of the Traveling Philharmonic to its administrative members and the government planning deputy, with a cover and short interview by our national television. I consulted on the project and treated its flip-out acoustic panels. Now French audiences who live without access to a concert hall can be visited and enjoy various performances organized by the owners of this unique philharmobile."