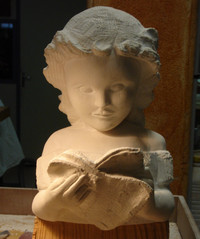 TQWT/BR. This riddle describes the M1's particular bass loading as a combination quarter-wave alignment with port. "I start by looking for convergence between theoretical predictions and actual listening. Everything worth knowing about bass reflex has already been said. For the interested reader, very good theoretical studies start with the Rossi professor of Lausanne's Polytech for the theory, G.A. Briggs for the know how. All essentials are there to be compulsory reading. Then come the classic Vance Dickason and Joe d'Appolito books. Today Bjørn Kolbrek and Thomas Dunker have written the 1'000+ page definitive audio bible on Horn Loudspeaker Systems which traces the history of my passion. For the M1, I start with the basic Helmholtz resonator principle which goes back to Greek and Roman times. Then we talk about alignment and set up a system which reinforces the low frequencies. Nothing in life is free so a basic port degrades the speaker's overall response in the amplitude and time domains. The first thing we must consider is the woofer we want to use. That's an art well beyond basic Thiele Small parameters so we need our own measurements to understand how our driver works in free air. After that software is very useful to calculate the volume and surface of the port but it's not enough. We must create a tunnel that dances with the music to not go against time and step on our toes. Now we develop a very simply system which gains in fluidity yet all the while respects the driver. We don't force anything. We try to understand the totality of the requirements and our engineering obligations toward them. For the quarter wave it's similar. It aligns with the resonant frequency of the driver and cabinet. Here I studied the work of Martin King including his FaceBook page." [One of Alain's sculptures at right.] 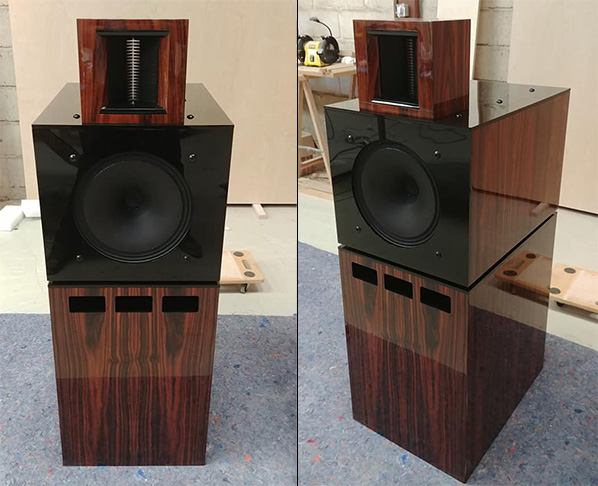 "Conventional ports indeed have a number of issues and it is very complicated to correct them all. To think of them, start at zero. Blow into a bottle. At the right frequency of self resonance, you make a sound. It's mechanical acoustic amplification. This resonator has a closed cavity called the bottle which communicates with the outside via a small tube of a given length and cross section, the neck of the resonator. Its dimensions are small compared to the length of the acoustic waves generated.

"Air is considered an ideal gas and the bottle is thermally perfectly insulated or may be considered such for the time scales involved in the passage of an acoustic wave. All dissipation effects such as the friction of  air against walls or losses via acoustic radiation can be ignored because they influence relatively little the value of the natural resonant frequency. Under the influence of an external disturbance—our blowing air across the neck opening—there appears a small displacement of the air column inside the neck at a given amplitude.

"The corresponding mathematical formula is that of a linear oscillator with one degree of freedom which defines the pulse of the oscillator and its frequency. This oscillator is analogous to a mass-spring system and doesn't involve the propagation of waves. The Helmholtz resonant frequency must therefore be distinguished from the acoustic eigenmodes of the cavity which are solutions of the Helmholtz equation to occur at much higher frequencies. In short, we need a specific box volume, a collar, the right tunnel length and entry and exit corrections. We also must deal with the acoustic impedances as the relationship between the semi-open environment inside the port tube, the air volume displaced by the driver and the precise position of the port tube within the enclosure.

"A bottle resonator is rigid as we blow into its neck. With a loudspeaker that's not the case. We suffer deforming surfaces and at least one more exit inside this volume (the driver) which creates its own very strong vibrations. Without Physics this gets quite complicated but there are echoes, phase rotations and very powerful chaos like a stampede when the metro doors opens, including energies which disturb the speaker membrane. The higher this energy, the more it disturbs the midband with resonances in the bass-reflex chamber. Now we get the well-known blurring effect, time-domain drag and compromised restorative forces. Naturally our amplitude response is non-linear too because the port only amplifies one part of the spectrum but which one?" [Model M Zero above.]

"A resonator oscillates. It tries to move as soon as we stimulate it. That presents real stability issues. How to stop the resonator again once it goes off? We must understand how to regulate it or make more noise than music. When we do understand it, we see a system loop which wants to oscillate. A poorly designed bass reflex behaves a bit like a loop control system that doesn't work well. My M3 too has those problems. I just know how to minimize them maximally. The interior volumes must be in ratios which suppress parasitic resonance as much as possible. Then our port isn't a plastic or metal tube but integral part of the box built from the same wood material to be completely inert. Once the cone moves, it defines a given air volume and we need a very precise relationship between that and the port tube volume which in general people don't account for. Software calculations don't know the air volume the driver displaces so they end up with a port surface and length which pleases the eye more than the ear."

"For my proprietary tweeter, I know that it works best on a 3.3kHz high-pass. So despite its bigger mid/woofer, the M1 shares that with the M3. Theory might suggest otherwise but with absolute certainly, theory does not make for good music. Theory without listening is always only a dead end. Each driver has its own personality. One must understand and respect it to correct for its shortcomings like where it becomes directional, how it behaves in the impulse domain, how it distributes spectral energy across its band for tone color, how it reacts to different filters and alignments. From there we isolate a dozen promising crossovers, then listen to each one in succession. To call any speaker design complete, I look for the emotions and poetry like Matila Ghyka does in the book The Golden Number. Without love and magic, it's impossible to make a musical reproducer. In fact I don't design loudspeakers. I try to make instruments capable of reproducing the emotions which are encoded in the music." 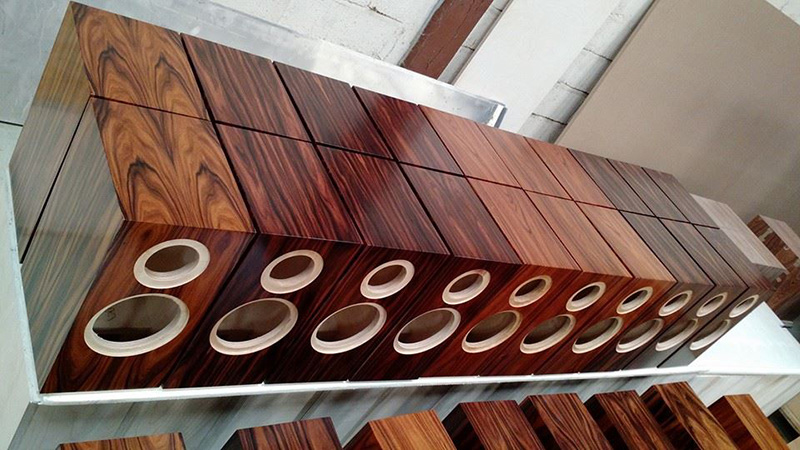 For someone with 22 years as a master mariner in the French merchant navy—"Captain of long course and electro-mechanical engineer"—that was quite the transition into civil life. Or as Alain put it in a poetic mood, "us sailors are conquerors of the useless but vital. We know about urgency and survival and sea water flows in our veins. That changes our vision of the world. It's more salty.

"I'm currently working on a new project with very clever compression tweeter [see above, Ed.]. It still needs some mods but is really amazing. It also uses a new Supravox 245 driver. This could become the ultimate TQWT 2-way of 98dB sensitivity, 2.2kHz filter and 35Hz-22kHz bandwidth. The goal was to have a driver that's 100% to my specifications, built on a very solid aluminium basket with variable-thickness cone based on a legendary 245mm cone of 3.4g which Supravox adopted, with special coil, glues, fabric dust cover and fabric suspension to have an fs of 40Hz not 60Hz like the paper suspensions.

"The motor has the field I want, with parameters perfect for music. I hope to make the best driver in the world, the ultimate weapon for music. I don't know if I'll succeed but I'll try. Over 30 years, I've made dozens of prototypes on a 210mm platform but it wasn't big enough to be really serious for a 2-way. Now the result is magic and incomparable on female voices. I already ordered 120 cones and coils." When the muse beckons, one must respond.

Antoine: "Allow me to add some explanations on the manufacturing process and my custom approach. You already know that I craft our cabinets from Baltic birch plywood. I assemble them with a hand press, not automated machine. Then I select the right veneer and make a drawing to trace the wood grain. The veneer then is glued up by vacuum press. My next step is fine sanding it before the first polyester base coat goes on which creates the depth for the final varnish layers. This polyester coat is hand-sanded because mechanical sanding won't achieve the same flatness. Now I apply several coats of varnish to create the gloss which then is sanded down very finely before I buff it with sheep skin to obtain the final mirror-gloss finish. The heart of my work at Rouault Acoustics is to offer custom-crafted loudspeakers finished to the client's wishes. I offer an infinite number of lacquer colors and nearly 100 different veneer options. For the M1 and M3, we simply picked a limited number of veneers as standard options to have in inventory but upon request, pretty much anything is possible."