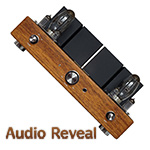 This review first appeared in June 2020 on HifiKnights.com. By request of the manufacturer and permission of the author, it is hereby syndicated to reach a broader audience. All images contained in this piece are the property of Dawid Grzyb or Audio Reveal – Ed. 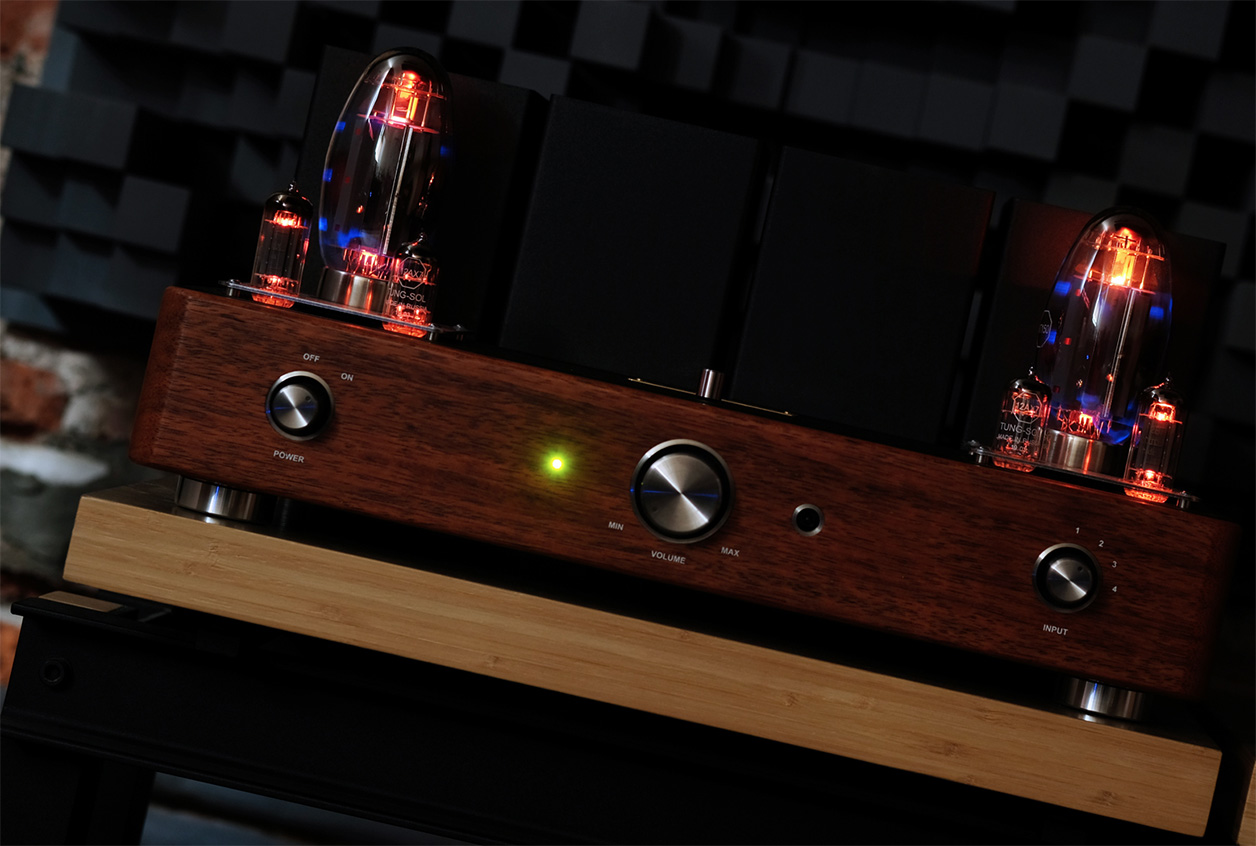 Tube audio seems as relevant and popular now as it was a decade or two ago. In fact, many enthusiasts won't lock back knowing that today such products can be had brand new. Perpetual demand incentivizes manufacturers and this review tackles one such case of happily supplying said demand whilst being proudly made here in Poland. For our hobby, these are interesting times. An abundance of product types shows how nothing ever gets truly outdated. Although it's quite obvious where top popularity lies, neither has digital music completely replaced physical carriers nor have solid-state amps sent valve decks into oblivion. Some of us like to touch and smell freshly bought vinyl. Others favor the conveniences of streaming with smartphones. Some like stout power dressed in petite class D packages. Others enjoy the pleasant glow of hefty valve ware. There's no right and wrong. The audio bubble is large enough to accommodate tech both old and new. 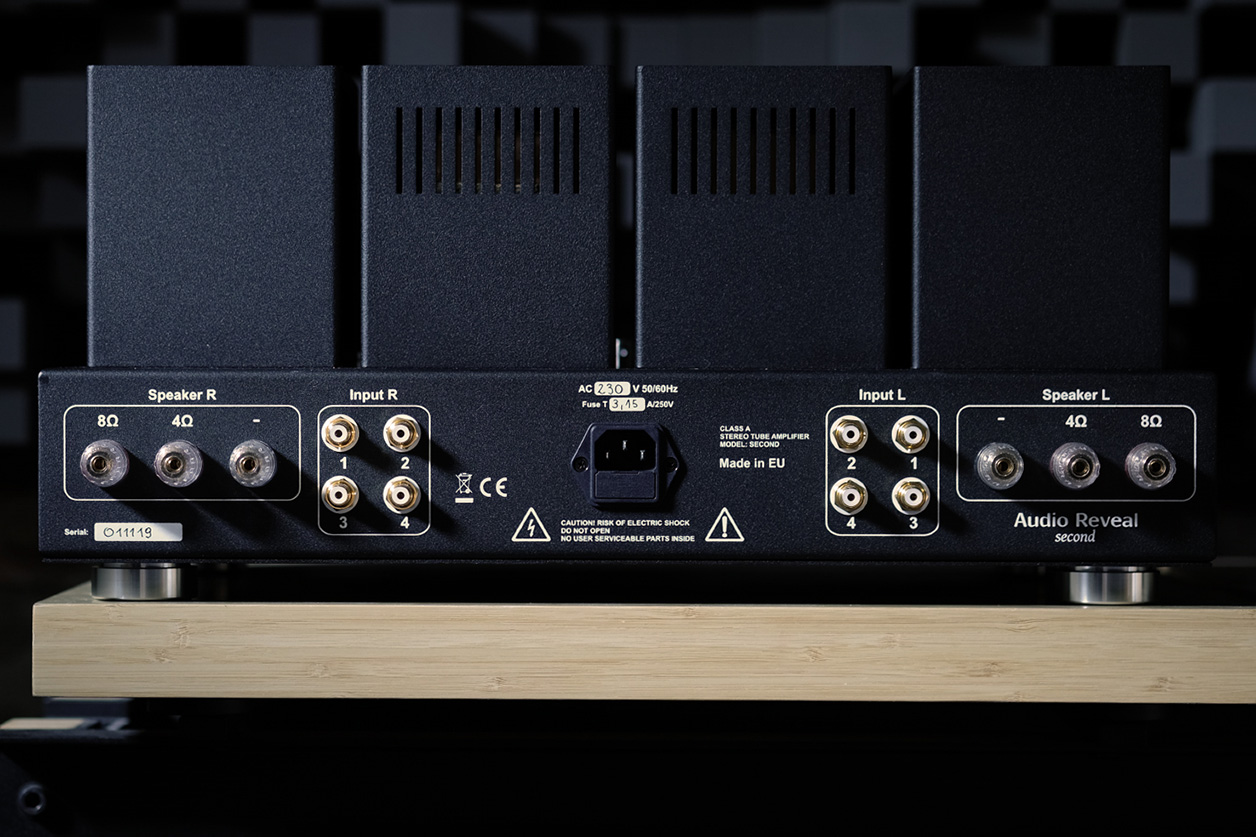 As a reviewer for a living, I embrace any product type I can write about in an informed and hopefully entertaining fashion. Still, there are limitations based on exposure and ancillaries. Zero experience with CD players and vinyl leaves them off my menu. Usually low-power amps follow suit since I don't own high-efficiency speakers to hear them at their best. Nonetheless, once in a while the moons align to unlock such challenges. About a year ago I visited the Nautilus audio shop in Warsaw, located a mere 15-minute drive from my HQ. Although the highlight of the social event then had nothing to do with today's product, it's where I was introduced to local brand Audio Reveal from parent company Altronik. Owner Michal Posiewka was present to explain that he's been an electronic designer specialized in alarm and access control systems since 1989 and an audio enthusiast for some 20 years. His first system had Mission speakers and NAD electronics, then he upgraded to Focal and a hybrid Unison Research amp which was followed by their pure-tube push/pull EL34 amp. 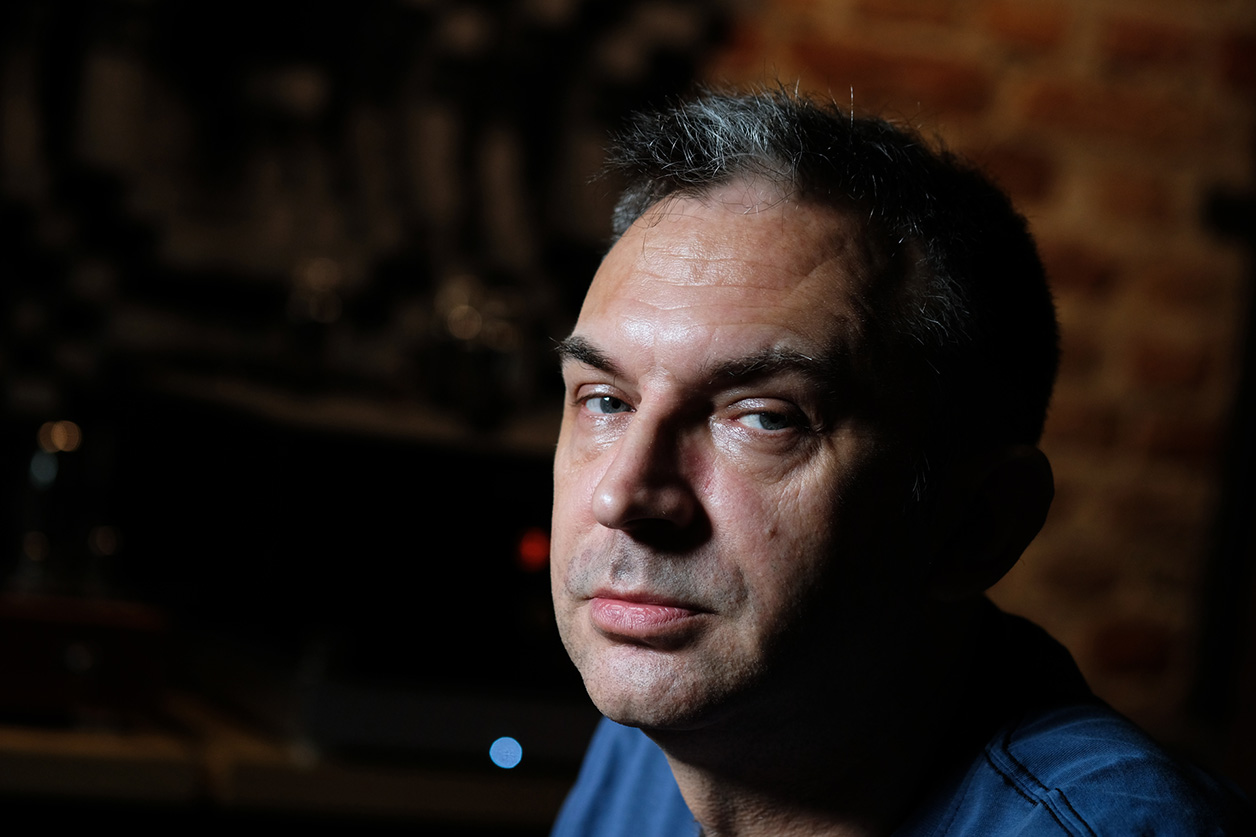 From then on Michal never looked back on transistors and his skills and willingness to design something of his own eventually kicked in. By 2016 he went to work on his first amplifier prototype. That's when he registered the Audio Reveal brand, with the name offered up by his son. Early prototypes included EL34 but in search of more power Michal soon leaned toward KT88 set as pentodes in purist single-ended mode. It took two years of R&D and field-testing to land a finished product baptized the Audio Reveal First. To me the most intriguing aspect was elsewhere. Many small boutique operations have a hard time finding distribution. Not this brand. As a customer of the Nautilus shop, Michal mentioned to its staff that he had an amplifier. This interested CEO Robert and what happened next is easy to predict. Robert's large operation is known for importing many well-established often luxurious brands. Accuphase, Siltech, Ayon, Boenicke Audio, Avantgarde Acoustics and Transrotor are just a few. Audio Reveal had to strike Robert as quite special or he wouldn't have bothered representing them. Here now was my chance to learn why. To accommodate this assignment, Audio Reveal's Second integrated amplifier was delivered with a suitable load by way of Spendor's Classic 1/2 monitors. The game was afoot. 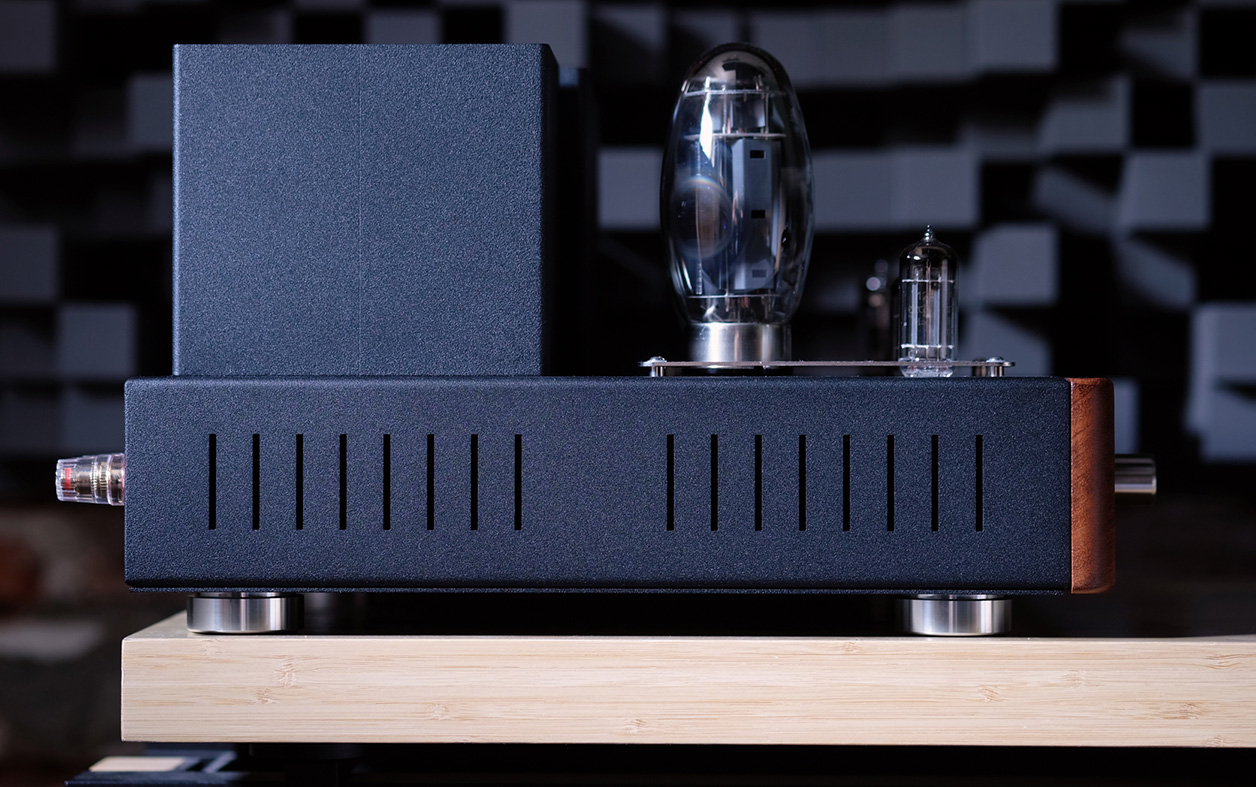 The product arrived in double cardboard substantial enough to prefer two pairs of hands and some effort. The inner box stored several thick foam levels cut to accommodate the amp in protective fabric plus a handy remote and separate compartment with all the tubes. The overall packaging was modest yet practical and all buttoned up. The amplifier was easy to remove and the remote went the extra inches. Many even top audio operations still rely on OEM controllers distinguished only by different silk screen. Michal's sports just volume up/down buttons on two gently bent steel halves cuffed by Merbau wood end caps. Obvious effort went into offering something unique. 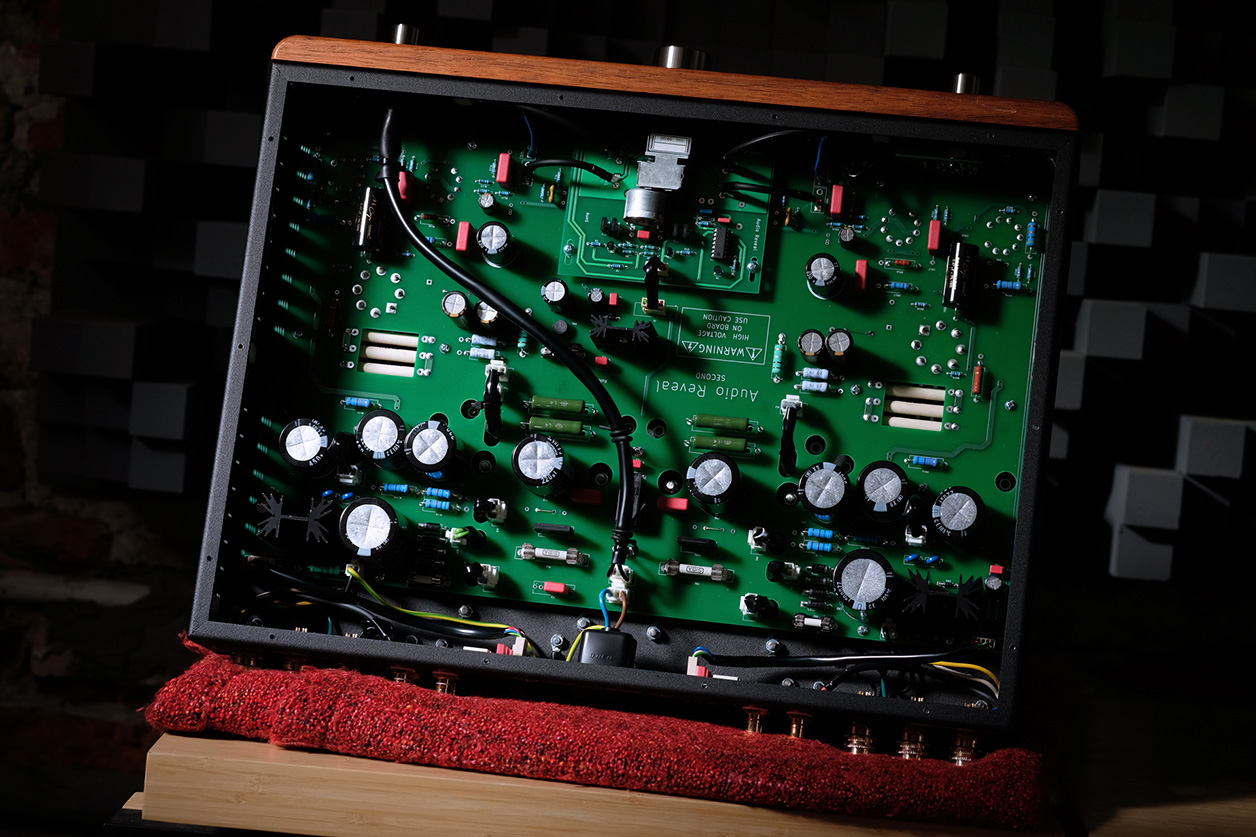