No matter the model number, all Darkz share geometry and size. The difference is in the materials. The introductory C2T then D2T feature aluminium that's been hard anodized. The latter's is additionally glass-blasted and bombarded in a particle accelerator to develop molecular tantalum and diamond skins. Ansuz' second best T2 upgrades to titanium, today's T2S has its titanium undergo a 60-hour+ treatment in the same particle accelerator to etch layers of tantalum, scandium and diamond deep into its surface. If you're questioning the reason behind this elaborate effort, the particle-bombarding process increases the material's hardness. That accelerates its transmissibility. The harder the material, the more effective it becomes at vibration evacuation. Each C2T/D2T/T2/T2S sells for €270/620/780/1'170 respectively. That renders the top specimen a quite insane proposition when you need at least three per component. But then booking the particle accelerator at Aalborg University is a very costly proposition and raw titanium demands far more than standard aluminium. The 's' suffix of the flagship Darkz is short for supreme. 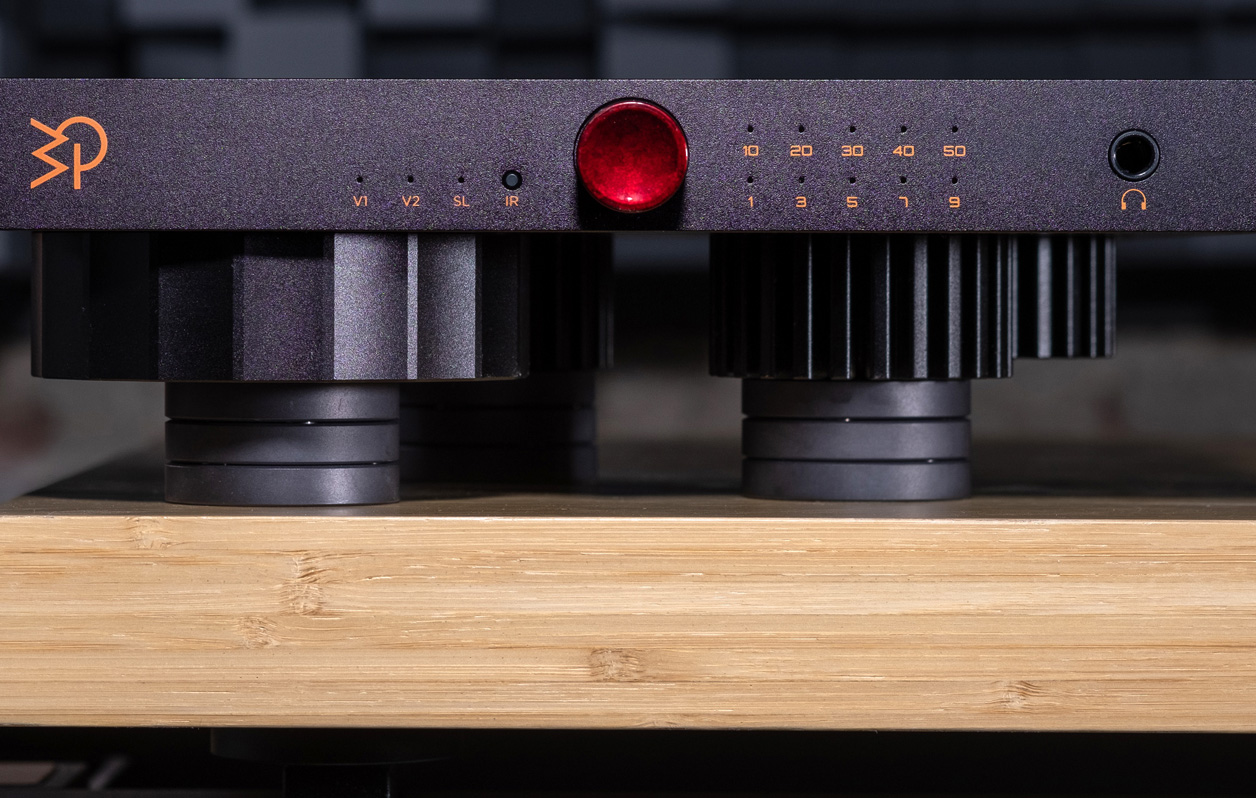 My fidata HFAS1-S10U handled storage/transport duties, then a LampizatOr Pacific DAC passed signal to a Bakoon AMP-13R. From there Boenicke Audio S3 speaker cable went to sound|kaos Vox 3afw monitors. Interconnects were Boenicke Audio IC3 CG. All main hardware saw the Boenicke Audio Power Gate distributor via its three captive M2 cords. The USB chain included the full iFi audio stack of micro iUSB3.0, nano iGalvanic3.0, three Mercury3.0 USB cables plus one 9V iPower. One external set of LessLoss Firewall for Loudspeakers modules complemented the sound|kaos Vox 3afw and a Fidelizer EtherStream sat between my Linksys WRT160N router and fidata server. A GigaWatt PC-3 SE EVO+ power conditioner fronted by its own LC-3 EVO cable powered the PSU for a USB reclocker, router and network switch. Six Darkz T2S were enough to isolate two components at once. To start somewhere, one set landed under the Bakoon's two most protruding heat dissipation nodes plus its round transformer foot. Puny mass and size made this integrated by far easiest to lift and move around. What's more, the top shelf of my rack had enough space to align all required T2S footers next to the AMP-13R to conduct easy A/B with/without. Next the T2S went under my fidata transport and Pacific DAC simultaneously and separately to map where they did more. Next the plinths of the sound|kaos Vox 3afw stands sat on them. Although I had further possible combinations, the intel gathered during these triangulations was already more than enough to get the picture.

The Bakoon's tiny footprint had already been useful during my LessLoss Bindbreaker review. Although moving it onto and off these Lithuanian decouplers had been a quick job, early on their action was rather elusive. After more time I understood their effect and from that point forward had no issues. Suffice to say, this had been my first such assignment. I had to learn what these devices were meant to do. By contrast, the three Ansuz Darkz T2S underneath the AMP-13R introduced themselves from the word go. One swap was all it took to have something firm to hold on to. Each following change merely confirmed the impression. Most importantly, I didn't have to focus to map any sonic changes. That alone was telling.

I encourage you to listen to "Creeper" from The Acid's Liminal LP. It starts with a series of quick impulses over to the right followed by slower heftier bass taps in the middle. The Bakoon on top of the Darkz rendered all of this beefier, faster, tighter and more cohesive. The vocalist that kicks in at 0:25 sounds naturally calm, soothing and very clear. The Danish footers made him less edgy, ragged, hot and grainy. This male line became even more substantial, calm, comforting, smooth and finely outlined. The low powerful bass blows in the background struck me as more extended, composed and tactile. All instruments isolated more distinctively, less matte and nervous. They felt fleshier and statelier. Their snappier punchier attitude was heard loud and clear especially during the fierce left-sided claps that appear out of nowhere at 1:46 and repeat multiple times later on. So today's titanium addition provided extra heft, bite, bang and articulation and was free from any downsides.