Top billing? If I had to narrow down this speaker's desktop showing to the one aspect that made the most difference, I'd pick a lived-in he-man voice like Russel Crowe's. He has a most recognizable timbre to which age has added further gruff gravitas. On a small speaker's part, that requires considerable earthiness and guts to become believable. No lightweight semblance will do. It'll feel cartoonish. That today's box managed it believably… well, that spoke highly to the type weightiness that's so hard to pull off with such a small driver. It's probably the smartest bit of the chip's IQ injection and why the vintage of this Oslo succeeds so well. Bottoms up in more ways than one.

Enjoy sitting half lotus against your bed's head rail? Now a compact little foot-of-bed system is perfect. It's where my Fram Midi 150 hover on their oaken tripods fed by a Soundaware A1X SD card reader via coaxial S/PDIF. It's as minimalist as wired active gets. Now Vintage Oslo took the inside spots. I saw no compelling reason to use our Track Audio stands just to double investiture. Cheaper is cheerier was the motto all along. That called out this $699 do-it-all wired source to bypass microwave Bluetooth; which worked as advertised by the way. Coax made way for an RCA analog feed and with a standard 2 meters for the length of the bed plus 1.5m clearance at its foot, these modest widebanders now sat at typical audiophile distance. Yet they reached across space at my desired SPL for this usage even on excess like Yello's Toy. While the lowest end an octave above the recorded limits did acquire some hollowness, it certainly didn't lack for enthusiasm. Anyone who expects more from such modest cubic volumes and fist-sized membranes left their brain at the door. 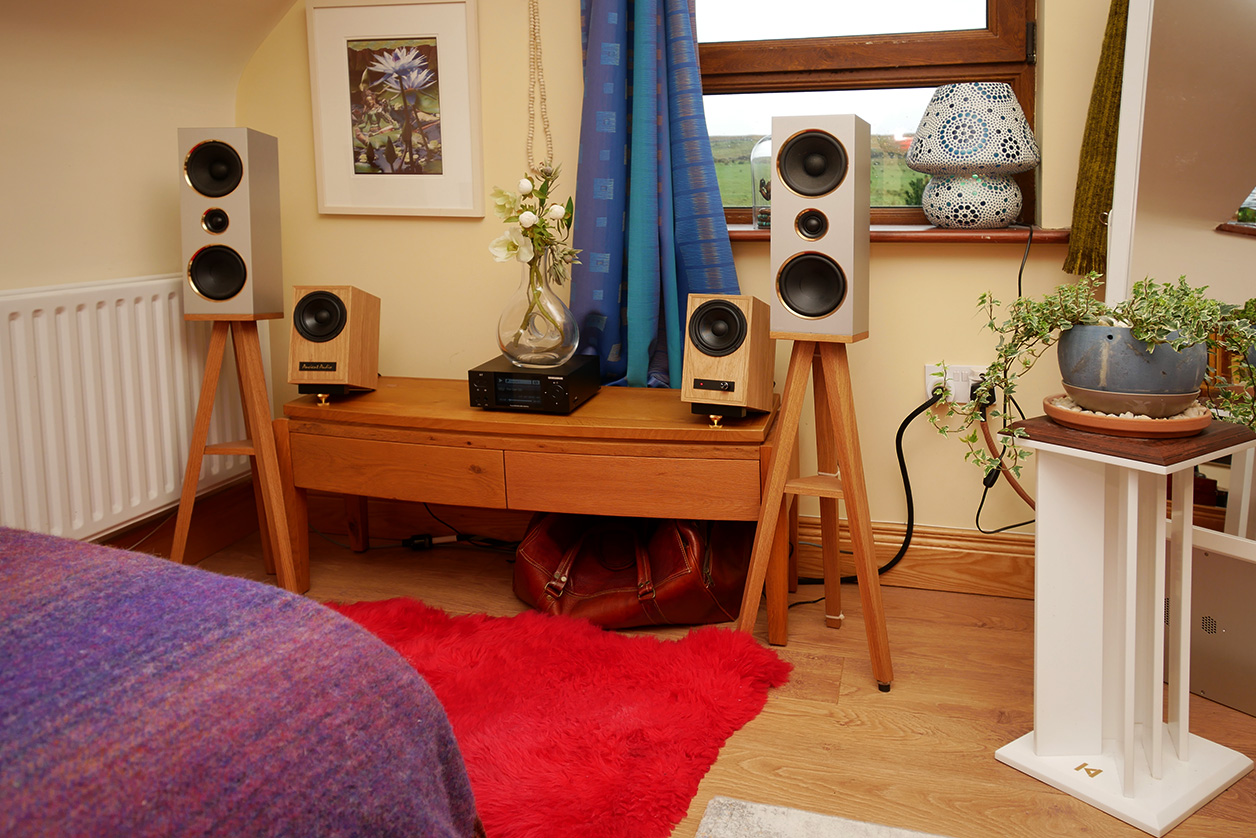 So Jarek's effort doubles at the kitchen table or in the home office though its primary habitat remains the desktop. Here proximity and clever DSP-assisted voicing dovetail for the most mature sonics to far exceed realistic expectations particularly given the humble appearance. Which gets us at Wojciech Pacula's conclusion from their Polish review. "I cannot help but point out something that's been bothering me throughout the time I spent with them. I don't know who they are intended for. For those not interested in sound quality, they are probably too expensive. On the other hand, for those who can afford them, the cosmetics may be unacceptable. Although the cabinets are nice, all other parts look as though they were prepared without attention to aesthetics. The thing is, these speakers have enormous potential. However, they would need to become eye candy, objects of desire which people can't take their eyes or hands off. For that, they'd have to cost a lot more. Again, for people who can afford Vintage Oslo as is, spending another 1000 zlotys wouldn't be a problem. But for those already hesitant, it would most likely cause them to look elsewhere. This is why despite their beautiful sound, I cannot say for whom Vintage Oslo is intended. I'm almost certain Jarek doesn't know himself. He showed us that he is brilliant at what he does. But that's not enough to sell something."

It's a fair proviso already previewed in my intro. Against the injection-molded curves of plasticized MediaMart competition, Vintage Oslo does look ancient. Against their built-in digital socketry, it's really a bit Flintstone particularly for lack of basic signal-carrying USB. That leaves more sophisticated buyers to sidestep all that for sonic substance. Where more sophisticated is synonymous with deeper pockets only, Vintage Olso will be overlooked. It's not sexy. It's only where more sophisticated means that yes one could easily spend more but actually enjoys not to if the results convince… that's when today's contestant can step out of the lineup to be counted. Just how many hifi shoppers will? Did we just erect one too many 'if' hurdles? 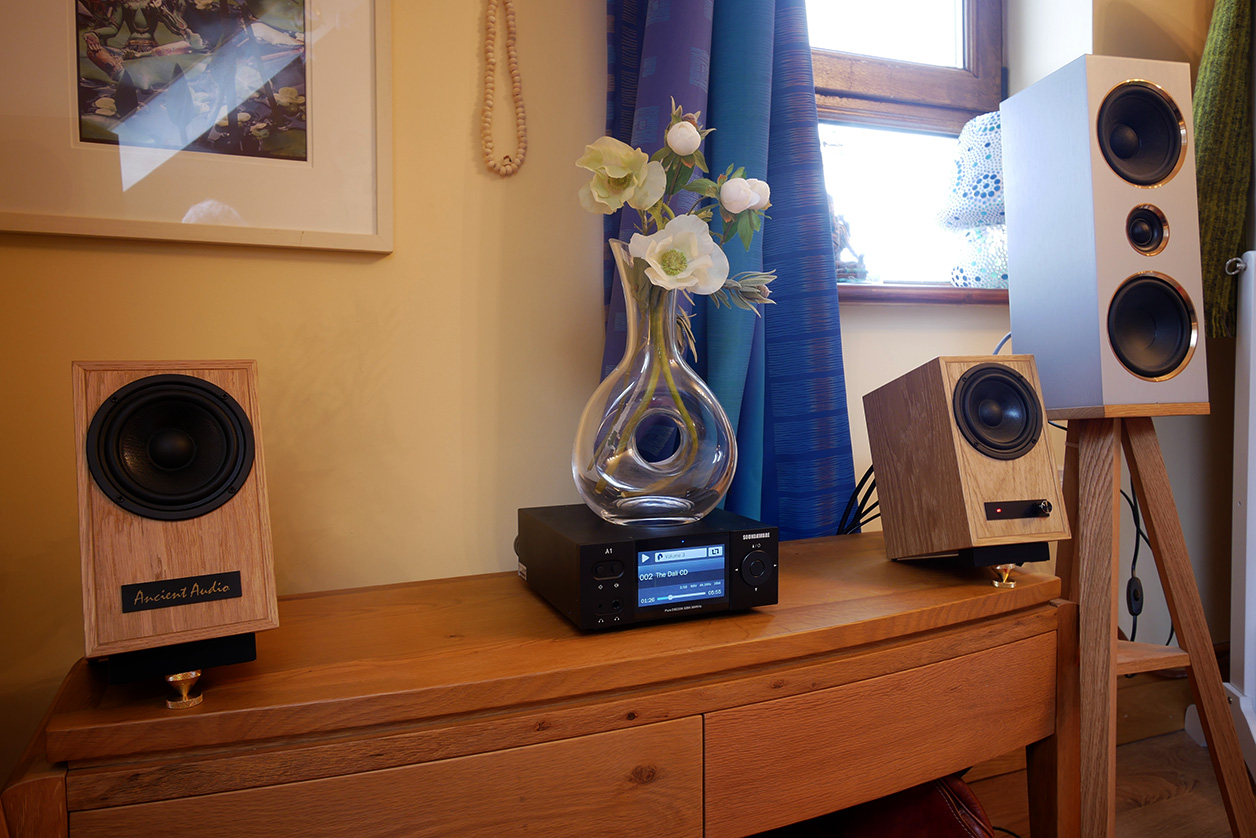 That's not really within a reviewer's remit to answer unless one enjoys playing billiards with careening crystal balls. I don't. I'll just say that on pure sonics, I really would be very happy to have Vintage Oslo on my desktop. And coming off Fram Midi 120, that I didn't expect. But perhaps I should have? After all, they do share the same designer and his proprietary Digital Speaker Processor chip….

Jaromir Waszczyszyn replies: "Thank you for review. Looking at its many pages, I see that you really took it serious. That was a big pleasure because I spent a lot of time to get the very best sound from them. I used the same criteria I apply for tuning expensive high-end systems to arrive at a really neutral, mature-sounding speaker. I liked your comments about sound. You reminded me of Piotr Ryka, the editor of hifiphilisophy.pl. He believes that for testing speakers, a well-recorded spoken voice not song is the definitive test. Very few people know the true sound of a Stradivarius violin or Fazioli piano. Everybody knows the sound of a casual human voice. Your opinion, Wojtek's and those from our friends at the Krakow Sonical Society confirmed that how I've applied my Digital Speaker Processor is correct. I'm very happy about it and everyone in my circle who has heard these mini speakers was as thrilled as a squirrel in the spring. So, the key question is, who will buy them?

"Of course I agree with Wojtek as repeated by you. These speakers do have a Flintstone Age primitive input set and typical ancient look. I think here the best reply might be from Wojtek's son Bartek. I used Google Translator to convey the gist:

"After a few days spent with the new Ancient Audio loudspeakers, I thought them to be a solid product that sounded good and that was it. I didn't really see a place for it in the overcrowded market place or the target buyer. Then I handed in my review and started thinking. The buyer… that could be me. Let's take a moment to consider other speakers made entirely in Poland by Ancient Audio. They are phenomenal and at the very top of the sector so out of reach for most. Since moving to my apartment, I can't complain about excess space. I had to say goodbye to a large full-fledged system. That is either in the cellar now or has passed on to new owners. My vinyl collection gathers dust. My source of music is the smartphone + headphones + Tidal (to defend my audiophile reputation, they're AKG headphones on the Tidal Master tier). Now Vintage Oslo showed me that something more is within reach. They are small with a pleasant classic shape and their materials harmonize well with my minimalist living room. Besides, for this type product they sound simply delicious. The sound is surprisingly large and smooth but not blurry and works great with classic rock and pop like Billie Eilish. What's more, these speakers were great with my long-serving PlayStation 4. I don't remember my titles ever sounding this good. Luckily I had the penultimate installment of the Mortal Kombat series (Mortal Kombat XL) on the hard drive of the Japanese console. It's a game where sound plays a significant role. After a dozen or so sessions with Vintage Oslo, I appreciated this aspect of Mortal even more. And the last thing: the speakers are wholly designed and manufactured in Poland. For me especially in these times of a global pandemic, this has value. Behind them is a flesh-and-blood real person, not a machine or a corporate mentality. Vintage Oslo sounds beautiful and I could love them with all my heart. Does this mean I see no flaws in them? Of course not. Their appearance, although classic, won't appeal to everyone. The quality of the instructions and use of the system cries out to heaven for vengeance. But why do I have so much pure unfettered fun with them?"

"Now seriously, before WWII, the Czech company Bata were the biggest shoemaker in the world. Their shoes sold worldwide. Then the company sent two agents to Brazil to conduct market research.

"It's either love or hate, no middle ground. Excuse my long letter but a long review inspires a longer comment." – Jarek