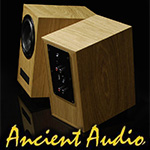 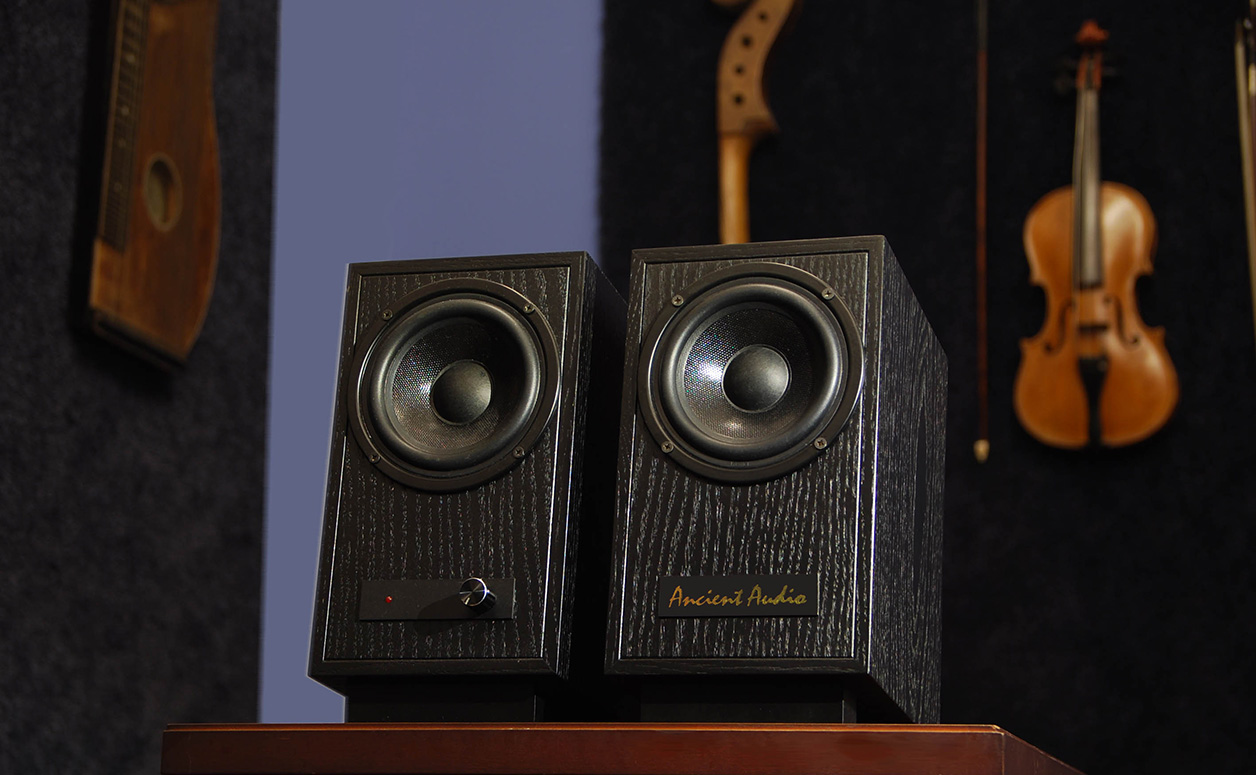 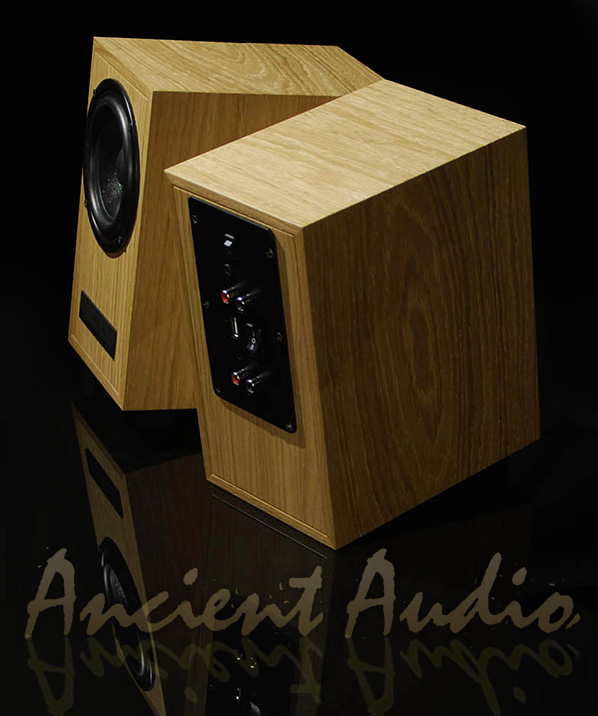 Ancient that is.
It's how we make fun of someone or something not with the times. Add the word vintage. You'd think we had arrived in the Stone Age with the Flintstones Fred and Wilma. With the Vintage Oslo, Ancient Audio boss Jaromir Waszczyszyn has indeed concocted an unusual mix of the old-timey and ultra modern out of Poland's city of Krakow.

Contemporary is its ultra-efficient class D and adaptive DSP on his very own processor chip. Vintage is its oak-veneered rectangular MDF box without any digital, just analog RCA and 3.5mm stereo. That's a surprise given the internal DSP.  If you want futuristic injection-molded shapes à la Vivid Audio just in miniature, keep looking at one of the many big mainstream brands that produce in China.

Want aluminium enclosures, dedicated tweeters, passive radiators and digital inputs? Look at Fram, Ancient's sister brand in Krakow. Seamless Polish metal craft and fancy SB Acoustics drivers pile on the invoice of course. If simpler construction, a single driver and lower budget do you especially on the desktop where active boxes could sit just 70cm from your ears, the pure point-source Vintage Oslo presses to the fore to stand tall and be counted.

So be mindful. Basic looks and stripped-down features are deliberate choices to package proven Fram solutions into simpler threads for a happier tag. Appearing under the Ancient Audio banner could still jar if we know the brand's top-loading tube CD players in granite; its sophisticated SET amps. It creates a sonically ambitious blueprint or DNA thread.

It presages that despite its minimalism, the Vintage Oslo must be more than is apparent to the eye and specs. Otherwise it'd set wrong associations for a brand that wasn't just first to show the high-end that uncompromising audio could come out of Poland; but which presently works on modernizing a flagship 300B SET to tailored switching power like Berning's Siegfried but with classic output transformers very much unlike the Siegfried.

Linking up past and future is thus intrinsic to Ancient Audio. On those terms, their latest creation very much fits. We also understand that a designer with boutique-artisanal background forever struggles to parlay his desire to reach bigger audiences against the innate limits of small-scale production with the industrialized West's higher labor rates.

But what's a man like Jarek to do? Focus solely on a shrinking valve-audio sector? Pursue huge multi nationals to hit the big time? For years he tried with his Sound Processor chip which, among others, could much improve television sonics. Breaking into the mass market just wasn't to be. Against those efforts we might view the Vintage Oslo as an attempt to make a mass-market type product on a boutique scale. That its sell price still couldn't match such ambitions is par for this course. So are sonics not steered by committee and bean counters but by a die-hard audiophile used to the really posh stuff. 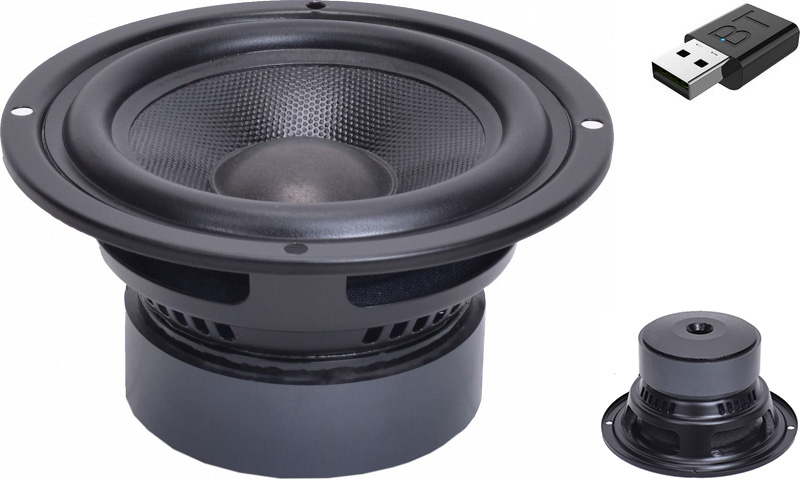 Despite a Nordic name, Vintage Oslo is Polish to the core. Its paper-cone 11.100.8.MC by STX is from Józefów, its cab from the Marek Godyn workshop in Tenczynek, its P3 MkI-E processor engine from Jarek's lair in Krakow.

The latter is an error-forward correction algorithm coded to this model. Before sending signal to the internal power stage, it corrects for bandwidth, frequency response, internal standing waves and other parameters. It offers three presets by rear switch, one for free-space listening, two for the nearfield (vivid and soft). Voicing took place in Jarek's 27m² listening room. That indicates what the ideal habitat for these compacts will be.

A USB-A port can supply power to a connected device or host an optional Bluetooth receiver to bolt on wireless connectivity. Leaving this to 3rd-party providers liberates Ancient from rolling over costs for global compliance certs to their buyers. Leave that to the deep pockets of IT majors like TP-Link.

That's a boon also to Wifi-allergic households like ours. The Vintage Oslo won't pollute our antediluvian brains with built-in radiation like an iFi Aurora whose Bluetooth can't be defeated. Meanwhile post-diluvian brains eliminate cables to stream off the cloud or smartphone. Past and future collide once more.

The 116mm/4.56" varnished cellulose driver in a stamped steel basked with ferrite motor has a 25mm copper voice coil on an aluminium former, nominal 8Ω impedance and 88dB efficiency. Rated by its maker for 150Hz – 15kHz bandwidth with a 110Hz resonant frequency, we appreciate how Jarek exploits down-firing port loading and DSP to broaden it useful response. The lot goes into cm³ defined by 13x24x18cm WxHxD. Width is thus the height of a classic jewel case to reconnect us with the Pleistocene. That's petite. To not obstruct the belly port, a table wedge with the necessary clearance and tilt is included. Now we have the basics. To learn more, we hand over to Jarek. Jak leci?