When the first pair powered up but stayed mute, a second one left Krakow two days later. That one was talkative and bumped off my usual €2'200/pr Fram Audio Midi 120. Sleek screw-less aluminium with upscale SB Acoustics drivers including two passive radiators per side plus digital inputs and classy remote made room for far more modest veneer, single far simpler drivers, just analog inputs and no remote. To not blow up the Audeze LCD-XC headphones, I had to disconnect them from the COS Engineering H1 whose volume control now ran wide open to act as a standard 2V fixed-out DAC. Here we see the before… 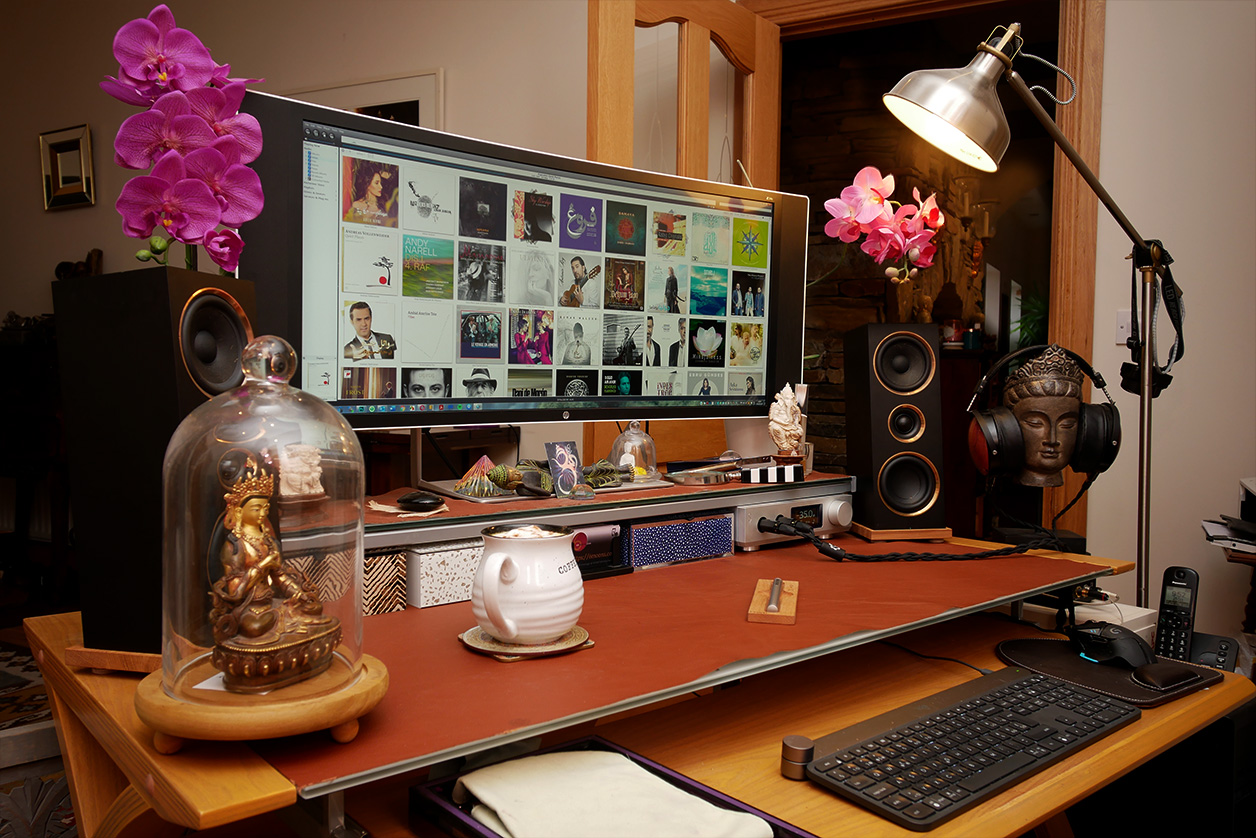 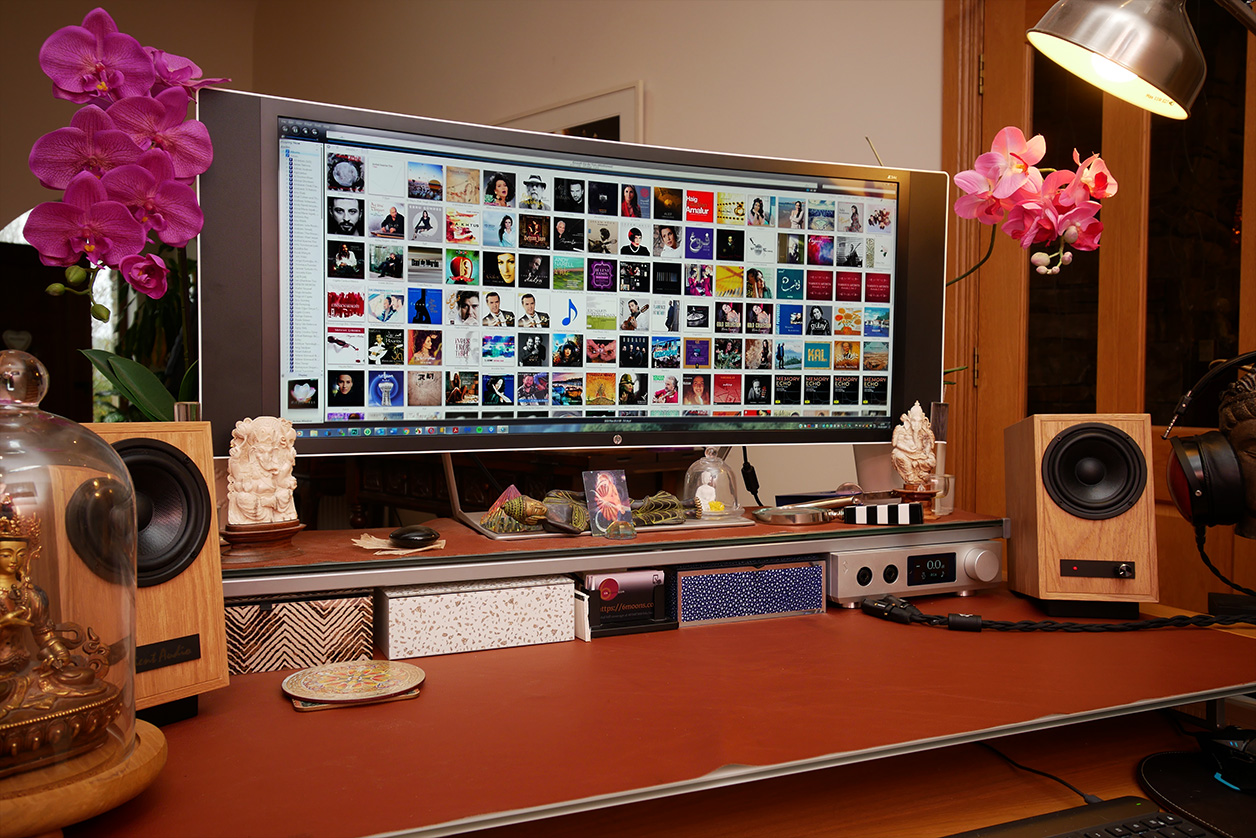 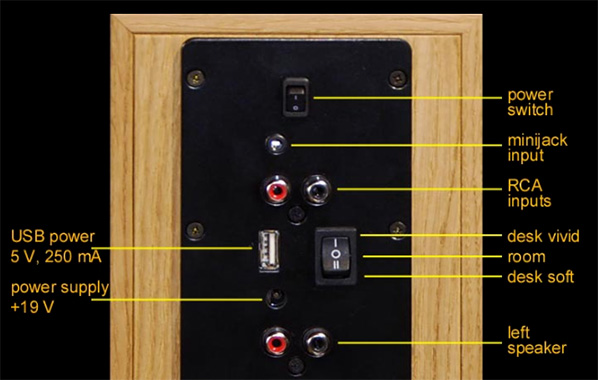 Time to let the Poles come on song and shed whatever temporary sleepiness their journey had caused.

A welcome functional difference to the Fram was their hard power off. Flick the rear-mounted toggle. The built-in electronics switch off, the red power light upfront signs off. The Midi 120 only goes into stand-by. Unless one disconnects its SMPS brick from the wall, the class D electronics remain under some current to age unnecessarily. I prefer the Vintage Oslo solution. Don't listen, don't run electricity; or do but by choice.

Unexpected is the pair of output RCA. Just one socket connects the active right to the passive left channel via the latter's captive cable. The other RCA is redundant.

Unlike the dual-concentric/coaxial driver of KEF's LS50 and its various descendants, Jarek's STX driver has no tweeter. It's forced into widebander duty. Regardless of DSP, we'd not reasonably expect pin-point imaging at the level of the far costlier Midi 120. We would expect at least some raggedness in the wider presence region. It's the usual price to pay for putting bass, midrange and treble on the same cone. With Jarek's review toggle, I could check into what his DSP correction does on said score.

To wit, it eliminates a tell-take hollow brightness aka honkinesss in the upper midrange, then grafts on low-end extension/power. A side benefit is greater overall tonal weight at the expense of a mild treble shadowing and loss of air even in vivid mode. Being able to bypass DSP proved how without it, the speaker's IQ drops a few grades. Sans (processor) chip on its shoulder, Vintage Oslo's common appearance is suddenly matched by far more common sonics. Really, what your €499 smackers buy are compensation smarts written to silicon smaller than a postage stamp. It's what elevates very modest ingredients to perform well beyond their natural station. Rather than an 'Intel inside' sticker, these boxes are accompanied by an invisible 'IQ inside' badge.

Without Jarek's speaker processor chip, the ears of informed buyers wouldn't take Vintage Oslo serious. With it, they'll likely forgive its limited functionality and basic looks. That's because sonics are rather more mature, pleasing and balanced. Without Jarek's one-up review toggle, you'll never meet the lesser version. You won't fully appreciate how much his chip belongs on this shoulder. But then none of us can imagine what it would feel like if our mind suddenly quit and disappeared. As a reviewer, this was actually a first. I could kill a speaker's brain to hear what sudden mindlessness sounds like.