Fuhgeddaboudit. That's what I'd been told to do. So I did. The gold Triple went into the passive Furutech power bar behind the Ramana Maharshi book. Out of sight, out of mind. For the next week I played the system purely for pleasure. If the Dutchie kicked in slyly like an aging tube in reverse, I didn't notice. I aimed at the 'get used to it then remove' routine. If I was too dense to catch on, I'd do the same for 'without', then add the device after some time of acclimation had passed. Audiophile amusements. I did have quite the number of new albums by well-loved and new artists to familiarize myself with. Where my accountant goes, buying new music is a legit business expense. I must keep her happy to not bitch at a high bill later when tax write-offs for the self-employed are poor in Ireland. It's as good an excuse as any to justify a critical habit. The below system starts with a Soundaware D100Pro ⇒ AES/EBU ⇒ Kinki Studio DAC ⇒ icOn 4Pro 40Hz 4th-order high-pass ⇒ Crayon Audio CFA-1.2 ⇒ sound|kaos Vox 3awf monitors, icOn 4Pro 40Hz 4th-order low-pass ⇒ Dynaudio S18 subwoofer. Resonance control by HifiStay of South Korea. 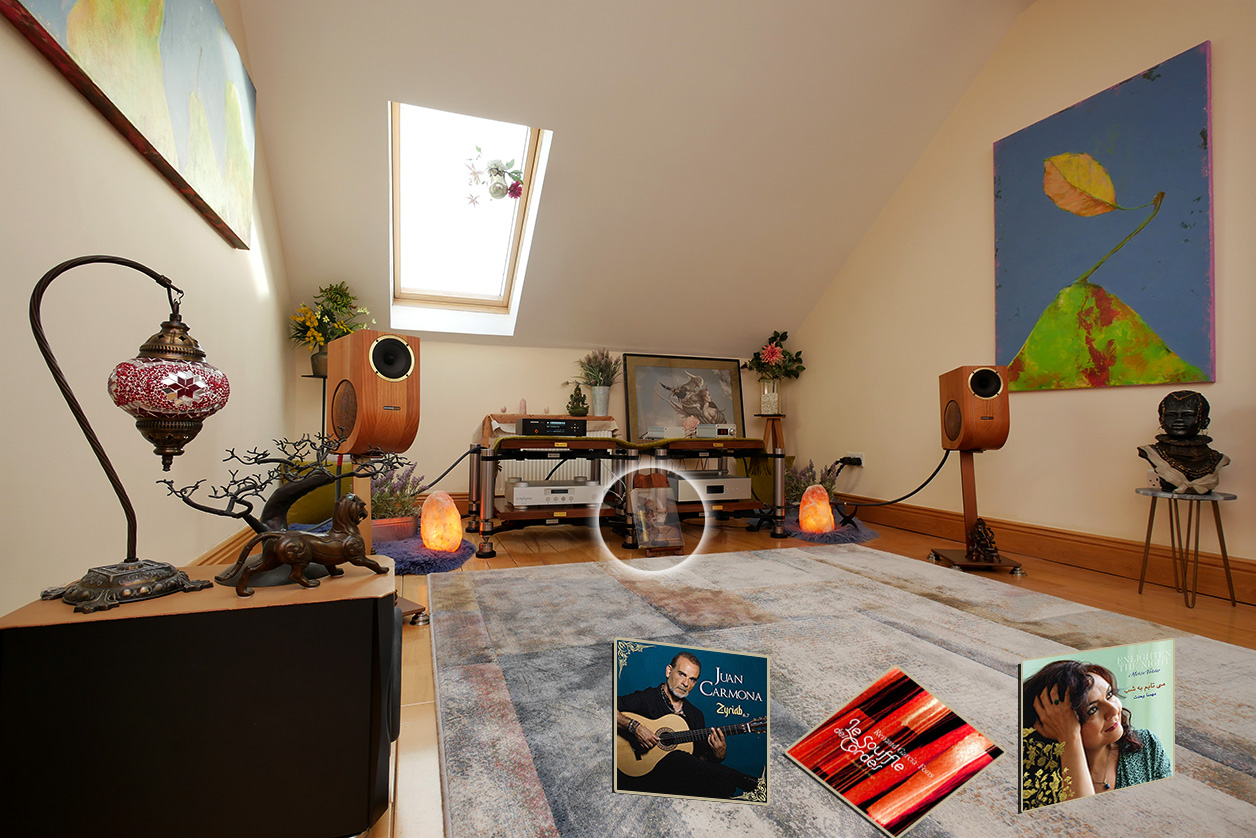 As is habit, my first track was simplicity itself. It's easier to get my bearings when I expect subtlety wrapped in nuance. Guy'n'guitar with ultra-sparse background cello it was. Hello Jacob Gurevitsch's "Ei Sham Baofek". It's from his In Search of Lost Time album. Aside from being unabashedly pretty, audiophile attractions focus on recorded ambiance. I look into how decays of guitar and Hebrew lyrics draw fractional bloom like trailing watercolors; how spatial wetness affects contrast and clarity; how it enhances timbres. The ground rule for any deeper dive into recorded space is simple. The more of our own room's decay signature dominates, the less we discern recorded space. It's an either/or affair. Nearfield listening with extreme toe-in compensates for not using absorptive/dissipative panels. From similar AC tuning devices, I knew of their delay/lingering action. It often doesn't turn their effect on/off crisp like a light switch. The appropriate protocol was listen with the device, disconnect it, wait for 10 minutes, play again, plug back in, wait 10 minutes so no quick A/B/A. Just so, the verdict was clear. With the Gold, the sound was—cough—richer. I heard more overlap of primary sounds against prior fades so more connective tissue. Imagine yourself talking to a friend in a church. Then exit and continue your chat in the street. Your voices will instantly 'out' on the counts of lean, thin and dry. That was the extreme version. Diminish its potency as though doing the same thing between big and small room. Voilà, the Akiko effect for ECM-type recordings rich in captured venue atmospheres.

If you still wear your thinking cap, you'll correctly predict that something else happened for drier studio productions. Of course the clarification action on recorded space didn't alter. No selective influence was at work, only a difference on what it showed. Now it was higher contrast as the frisson between sound/silence, between audible object on/against space. That difference had increased. Casual but illustrative phrasing calls it stronger image pop. Where the sounds pop across the virtual stage doesn't change nor what those sounds are. Only how 'loud' or 'strong' they pop gets a small boost. In culinary terms, think sweet/sour tension. Add more of either flavor and that tension between complementary opposites builds. It doesn't change the signature taste. It just makes it more piquant. The same is true for the right dash of salt. It won't telegraph as more salty per se, just more contrast. Voilà, that's precisely what the Dutch nunchaku barrel did: a bit more core seasoning like healthy MSG. Fancy hifi kung fu without breaking bones or bank?

Mention bank and everyone differs. What is a gentle tap on the wrist to one is a broken ulna to another. Here I'll only say that on potency, Akiko's golden stick might just top the price-to-performance chart of what I've tried in this genre. It's effective. All you need is one spare outlet and a system of already good resolution to maximize the subtle noise-killing benefits.

Remember me? Considering that I wrote this in early December so that season, call it the type thing you might give your favorite discerning audiophile who already has everything. What's more, they long ago let you know in no uncertain terms. They're perfectly content with their system. Do not bother getting them anything, not even a magic fuse. That's where Akiko's Triple AC Evolution is a perfectly safe bet. Go ahead, practice some civil disobedience. It won't change a system's direction. It'll just bring out a bit more of what's already there. Who wouldn't appreciate that? So stocking get stuffed. Stick it to both endemic ultrasonic pollution and audiophile know-it-alls. And don't forget to treat yourself. If you don't feel deserving, why should anyone else think so? That's not trick or treat, just treat.