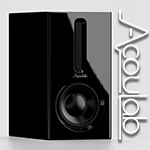 Première S class. Like that from Daimler-Benz, this too is from Teutonia. It's a 7" 2-way active fully differential DSP monitor. It runs 250wpc nCore power per side and motion feedback on its dynamic Seas mid/woofer. That revives a mid 1970's Philips invention which attached a piezo-electric accelerometer to a woofer's inside dust cap. The accelerometer output returned to the amp where it was compared to the input then generated an error-correction signal to modulate the amplifier output. Later the general concept became known as servo control in subwoofers from Genesis and Velodyne. Current hi-tech subs from Grimm and KEF use evolved variations thereof in conjunction with modern DSP. But it's still unexpectedly exotic on smaller mid/woofers. Today's monitor comes in your choice of gloss black polyester or matte white polyurethane. The tweeter is a 7" long 220cm² air motion transformer of undisclosed origin on a 4th-order 1kHz 32-bit/96kHz Analog Devices FIR filter. The internal DACs are ESS 9038Q2M. The ADC is an AKM AK5572. The XLR analog or AES/EBU digital input selects automagically. You'd obviously not run both at once. AES/EBU and XLR both rely on attenuation in the source. There's also an LFX output for an upcoming module—the name suggests a low-frequency extender—and RJ45-based AcouLink input for a planned source component. Idle consumption is a low 20 watts, standby below half a watt to appease Brussels.

Digital latency from signal processing is 30ms. Dimensions of the box are 40x22x35cm HxWxD. Weight is 13.5kg. Two 3m power cords come with. A 1-week home trial within the EU carries a €199 service charge, €99 within Germany. That includes pre-paid return labels. If you elect to order a factory-new pair within 6 months of your home trial, that service fee deducts from the sell price. It's how Noel Neu circumvents typical dealer markups, takes what-if out of the equation then safeguards against tyre kickers just wanting a free pair of speakers for a weekend blast. To trial Première S.exiness in person, one selects from available dates since trial pairs are traveling demonstrators. It's why they always return to the factory. When I called him, he had four pairs in the field. Depending on the care previous shoppers took, general mileage accrued and original B-stock blems, we expect some cosmetic wear. Whatever we end up with permanently will be a factory-fresh cosmetically flawless pair of course. 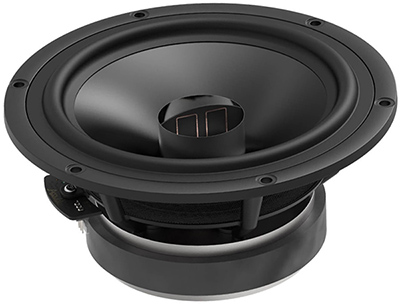 If that sounds like no BS, there's more: "The audio industry has some of the most passionate customers willing to do anything to enhance their listening experience. Unfortunately some entities exploit this passion. Allegedly sound-enhancing fuses and CD conditioning liquids, crystal to reduce electrosmog along with metaphysical explanations of why they matter are some items you find being sold to trusting audiophiles by exploiting their desire for better sound. We do not and will not sell products with no tangible effect or lacking foundation in reality."

In English Noel's last name means new just as Einstürzende Neubauten are collapsing new builds. Once you've been in this racket for a few decades, the hard wall between science and magic can collapse. Hifi cryogenics and related claims began on very wobbly footing. Now they're commonplace. Jitter wasn't even a concern when CD first appeared. The term electrosmog too is a more recent addition. Yet the underlying reality worsens by the year. It has big brands from Ansuz to Nordost and Shunyata declare open hunting season on it. Schumann resonance and WiFi allergies are real. Obviously everyone must take a stand to actually stand for something. Only chickens hide out in the bushes. Acoulab already by name ally themselves to tech like OEM high-feedback class D, digital volume control, motion feedback, active drive, DSP filters and their de rigueur conversion of analog input signal to digital. If we want to really push the three highs of linearity, bandwidth and SPL stability with a compact speaker box, these ingredients are virtually mandatory to reset passive limitations. [Seas mid/woofer with positional sensor behind the dust cap at right.]

Pros on the recording/mastering side who rely on these qualities have known about active DSP monitors for ages; well, not if we reference an astrological 2'160-year age. But who's counting? Audiophile acceptance of active studio monitors has been on a very gradual (1dB per octave?) incline because stuffing all into one or two boxes kills off their libertine dating scene of separates. Just so, upscale DSP speakers from Æquo, Dutch & Dutch, Grimm and Kii have made audiophile dents. At lower prices, Buchardt, Genelec and KEF dig deeper trenches. With their maiden product, Acoulab now set up camp right between those two sectors. That and the motion-feedback wrinkle had my curiosity. It's why I asked Noel about review interest. That's two-way traffic. Just because reviewers are curious about something doesn't guarantee its maker is into reviews in general; or ours in particular. So we cross fingers, sows seeds by asking then wait. 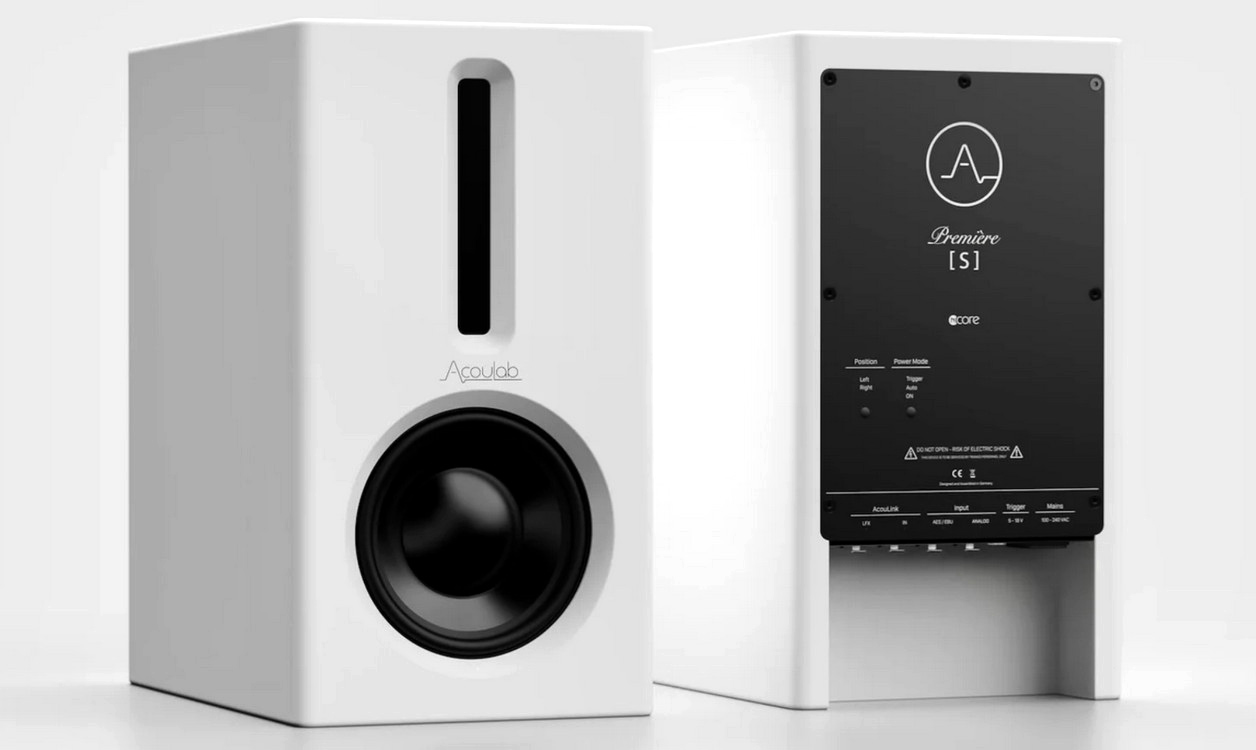 Noel responded in less than 24 hours. German punctuality. I grew up around it. Still, I had questions. With AES/EBU carrying l/r-channel information to need the rear-panel switch which sets each speaker to left or right, why was there no dedicated AES/EBU pass-thru? How many digital transports offer dual AES/EBU? For that matter, how many include volume control to have Sabre's on-chip attenuator associated only with the proprietary RJ45 Acoulab input? As it stood just then, one either needed two AES/EBU signals preceded by digital attenuation—I had nothing fitting such a bill—or variable analog XLR outs instead (those were easy) whose signal would simply convert to digital again. It's plain why audiophile purists still struggle with the concept of DSP speakers. Unless I overlooked something, Noel's featurization prior to his own source bowing seemed a bit peculiar. I've reviewed many an active speaker. Virtually all included volume control, most a remote as well. So I asked about those points too.