Play. For my sensibilities, video 2.0 was an ideal S-class playground. In their crisp image specificity, mapping, transparency and sub-bass anchoring, the Première indeed outdid Zu's Soul VI. Ivette however was rather less pleased. "These don't reach" she complained. "I don't feel a thing." Quite. That closed her book. It's how she condenses weak projection or communication powers. It's when the sound just sits there listless far behind the speakers. The reach-out-and-tickle factor of the hi-eff Zu does live on a very different page. By prioritizing those qualities plus far higher dynamic contrast and bigger tone, my wife couldn't tune into Acoulab's alternate reality. For me however, video imagery always happens over there. That's decidedly not in my lap. Now I want the associated sounds to behave alike. Stay far back. Don't dare pretend at pseudo surround. When going to the movies still was a thing—we've not done it since Taos/New Mexico—little disturbed me as much as seeing a helicopter flyby confined to a clearly flat big screen far in front of me whilst its chop-chop continued on well behind me. Surround sound is the height of crossed wires and conflicting messages. Like we say to Jehova's witnesses, sell it elsewhere! 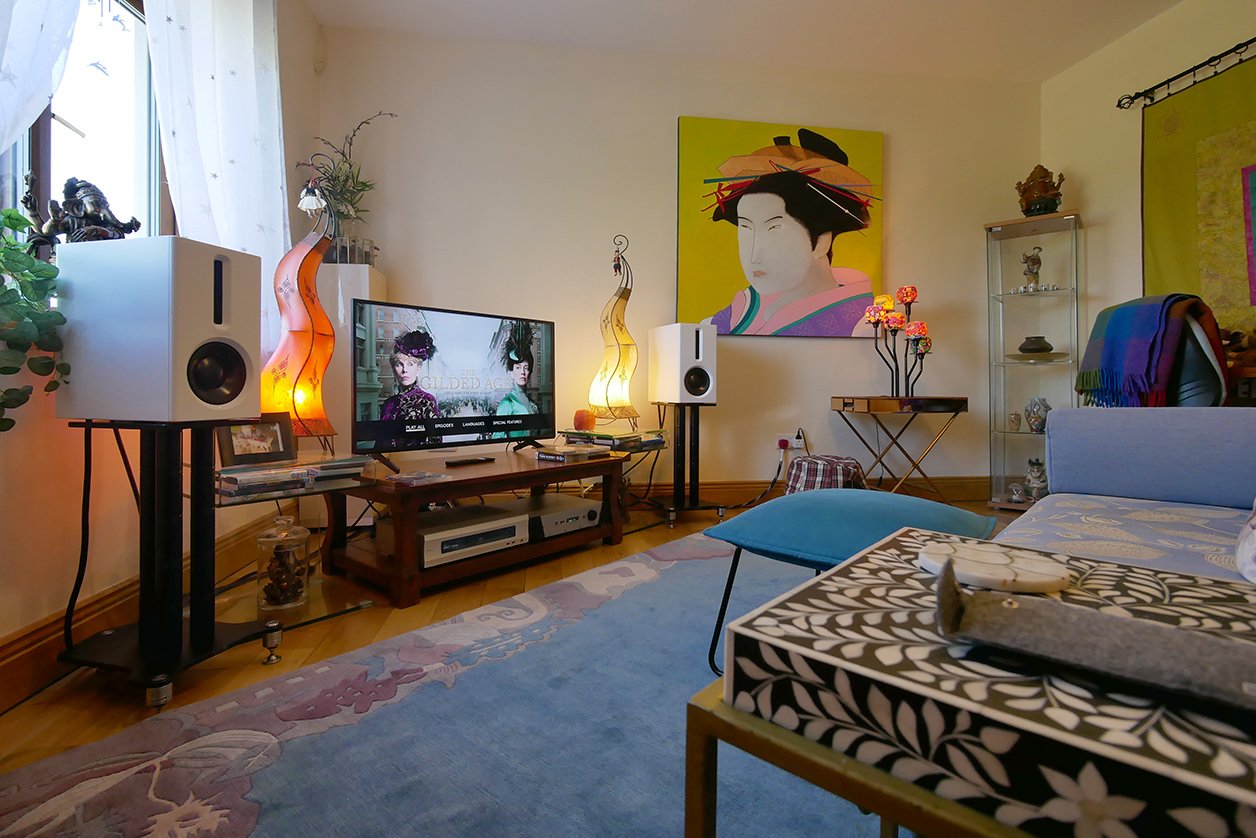 Noel Neu and our household have very different tastes in sound. But, variety makes the world go 'round or we'd all be bored stiff. Alas, I did find the lack of built-in volume control odd when it confounds expectations set by KEF's LS50 as the active breed's current benchmark in consumer audio. Already a $500/pr active Audio Engine monitor has remote-controlled volume. Why pay a lot more and lose it? Relying on 1-to-2 AES/EBU or coax-to-AES/EBU converters unless a rare digital source has twinned such variable outputs also had me shake my head. It's precisely why the Hypex OEM modules for active speakers feature coax and AES/EBU thru-puts. That a €4.7K active wouldn't struck me as another inexplicable miss. Clearly though Acoulab customers won't be bothered by any of it. To them my proxy grumbling will be misplaced. With 7dB more gain and input sensitivity increased from 4V to 2V, one big functional limitation of my early sample should already be addressed even though 2Vrms coaxial drive of music or video whose median level is set low might still not play loud enough. That's impossible to predict. Noel was simply adamant not to increase input sensitivity to 1V or higher. For video talkies and his original settings, I needed 7dB-15dB extra preamp gain to get loud enough in our small room.

Regardless of personal taste, the Première S is a mindbender when it comes to true undistorted sub bass. My Kii III encounter dates too far back to know whether it behaved alike. If it did at well more than twice the till, it better have. This new German is that kind of beast; with superior if far fewer drivers. Depth-mining electronica and heroic soundtracks with pounding kettle drums alike come off in ways that delegate subwoofers to the macho reject pile. Unlike ringy acoustic bass generated by resonant tonewood cavities, synth and electrified basses often lack crack and crunch over passive speakers whose woofers don't start/stop fast enough. Into this breach steps the Première's direct coupling of mid/woofers to ultra-low-Ω amplifiers plus tight leash of motional feedback. Minus obvious limitations of air motion vs. cone surface, Noel's sealed solution eats dry taut infrasonic bass for breakfast. Equivalent control across the entire bandwidth implies that the very same qualities are global so not specific to the LF. It also means that pushing the SPL needle upward holds together tightly scaled as tends to be common for active speakers. Playing big and boisterous should be another key part of this package with rejigged gain. It's also the antithesis of a romanticized or enhanced sound. Particularly in the white finish, that's back to looking exactly as it sounds: clean, no frills, honest, cool, collected and perfectly sorted. If your idea of the ideal stand mount is exceptional bandwidth and steep transparency for just the facts, ma'am… new brand Acoulab's maiden product deserves your attention. While it lacks some of their features including user-adaptive DSP, it strikes me as a '50% off' alternative to similar speakers from Dutch & Dutch, Grimm and Kii.

That's its unique selling proposition; for now. With his forthcoming LFX option, Noel Neu already plans more for this platform. Though we can't be sure, its name suggests a bass extender that integrates via bi-directional RJ45 and could just double as a stand to transform Première S into a twin-cab tower of power. Whatever LFX turns out to be, today's stand mount is just the first step in the unfolding reveal of newcomer Acoulab whose in-home trial offer makes for the best audition opportunity possible. It's far better than trialing something in a dealer showroom only to find out that it behaves very different in our own room. Before committing, with Acoulab we can be 100% certain. And that's a really big deal.