… two other small speakers which play at the very top of today's ~5K monitor game. The first is Martin Gateley's sound|kaos Vox3f from Switzerland, an ultra-compact 4-driver 3-way in solid wood. Two force-cancelling small woofers on either side hand over to a widebander on the front. At the very end of its bandwidth, that hands over to an upfiring Raal ribbon in a custom bronze plate. With a wide-dispersion midrange across unusual bandwidth, omni radiation in the mid/upper treble and deliberately higher omni action in the bass, the Vox3f does invoke more deliberate room reactions. Beyond the juxtaposition of wood and metal enclosures, I suspected that to be the primary cause for its slightly more redolent behavior in which lengthier decays gave more elasticity and suppleness to tone textures. The Model One's counterpart played it more damped and buttoned down. 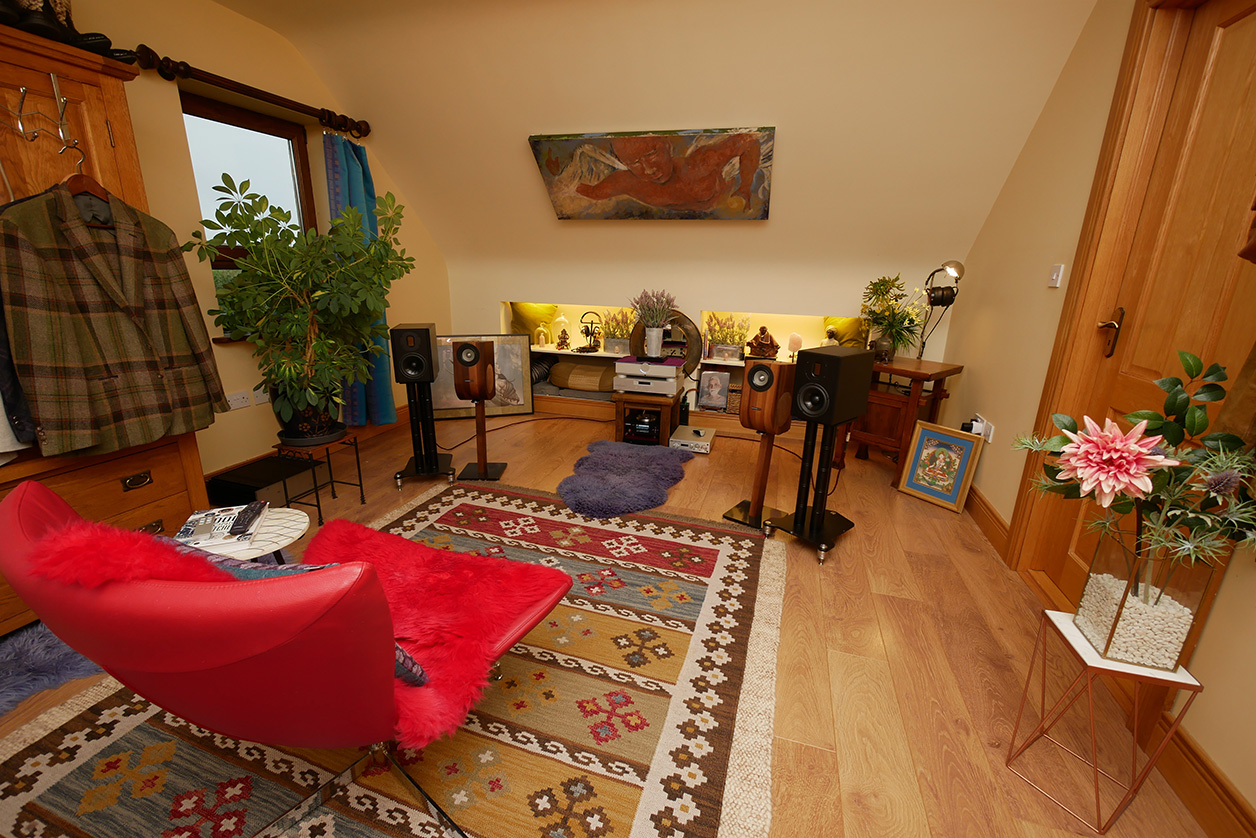 It took nothing bombastic to hear that. Anna Marie Jopek's Minione album with Latin piano ace Gonzales Rubalcaba already revealed the general lay of these lands. On treble dynamics explored with triangles, singing bowls, bells and other ringing objects, the Dutch took the honors. On bass heft and ultimate extension, the Swiss did. On perceived exactitude of rhythmic perspicacity, it was the Acelec again, on more swing than techno, the sound|kaos.

We may rightly take that last description to mean that on hard-hitting electronica which live not on crack cocaine but smack beats, the tuning of Cees' speaker cracked harder. This reconnects with his design brief of minimized mechanical resonances. It strips off leading edges their clinging fuzz. It makes for higher intelligibility in which stuff lingering between the notes is cleared out. The sound|kaos preference for wood which in musical instruments is key to magnifying string or breath power is a different aesthetic. It has different sonic consequences, albeit finely administered to avoid excess. The result is more textural wetness. The Cees ethos seems modeled closer on studio monitors to be drier. Here it's important to not misread dosages. Whilst easily audible, these differences weren't broad. Just as the Swiss wasn't deep triode excess, the Dutch wasn't a synthetic drum machine.

The dancer coming into this Orkestra Tangra number with Aliosha on Bulgarian lead clarinet doesn't translate crisp beat fidelity into robotic disco movements. That's a key takeaway if past encounters with massive aluminium-clad speakers left you cold. Another benefit of inert cabinetry is that higher SPL including brief flashes of intermittent big peaks don't compress as easily. With quality drivers like in this Acelec, a small box will play louder more cleanly that you'd expect. When the party mood strikes and the room remains appropriately sized to not ask more in the low bass than physical laws are willing to give, you can let it rip.

Round N°2 moved downstairs. Now the opposition were Kroma Audio's Mimí from sunny Spain. It's a front-ported 2-way with 6.5" Classic range ScanSpeak mid/woofer and small ¾" Hiquphon soft-dome tweeter in a shallow waveguide. Like Acelec, Kroma believe in inert cabinetry. They simply shun solid metal to favor Krion. That's synthetic stone of alu powder in resin whose panels they chemically weld to avoid metal fasteners. A pair of Mimí retail at €5'995, not far off the Model One. Because I have Kroma's matching Krion/tankwood stands, those could support either. Swapping with our banana-terminated Allnic cables was quick and each pair sat in exactly the same spots. The electronics were our usual iMac server, D300Pro USB bridge from Soundaware, Denafrips Terminator discrete R2R DAC, Vinnie Rossi L2 Signature preamp with Elrog 50, then LinnenberG Liszt monos. For the final stretch of the assignment, I also had a Nelson Pass XA30.8 class A behemoth to see how the Model One would show on 30 watts of high-current push/pull Mosfets. At €6'500, the Pass wouldn't be an unreasonable mate in fact. 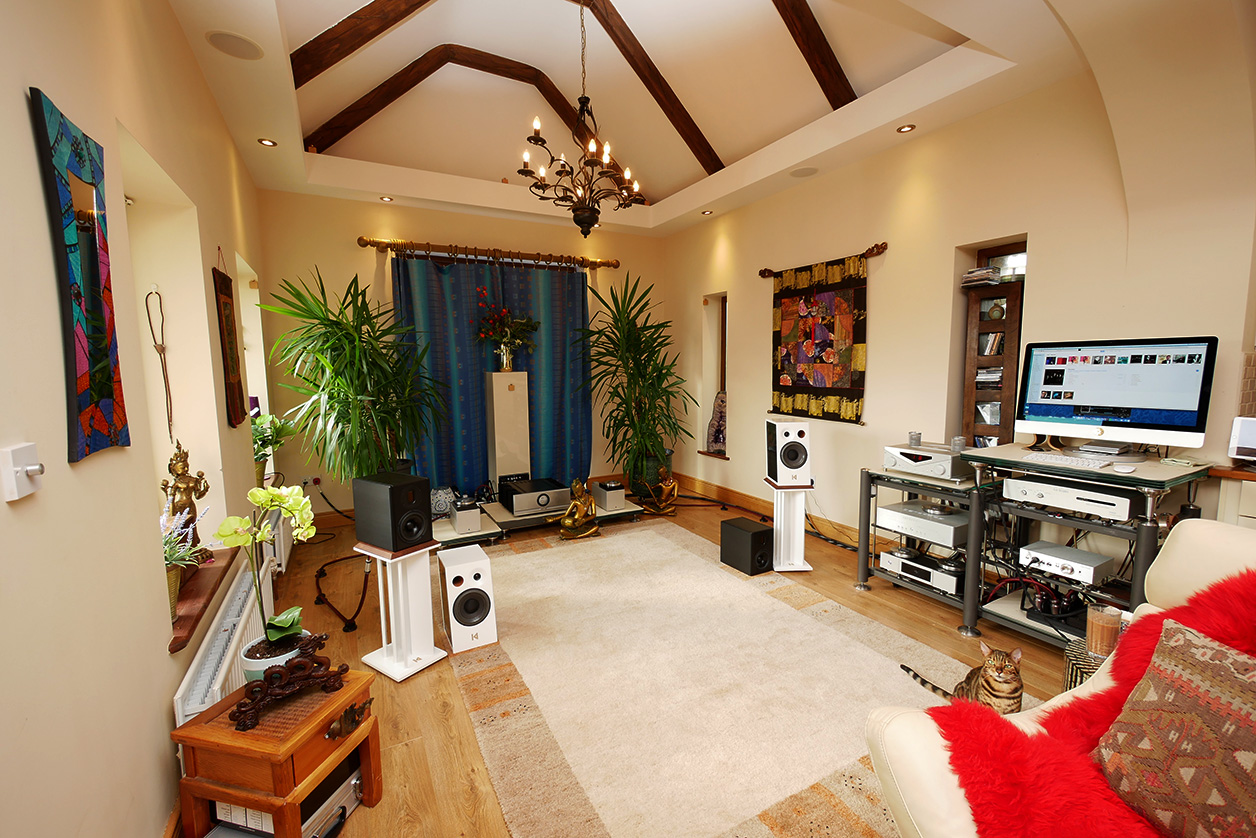 Setting up this 2-for-1 photo op, I suddenly realized—a first in 20 years on the job—that I could listen to this and see which speaker was the more sensitive by which channel the center image was pulled toward. Nothing moved. That prompted me to see what its makers rate their offspring at: 90dB anechoic for the Spaniard, 84dB for the Dutch. Cough. Either way, it took low digits on our preamp's volume to hit standard SPL. Time to stop eating vanilla/chocolate ice cream. Given that it was Acelec's review, I started with pure chocolate.