Now we disclose the true nature of it all. The sirens of Warsaw link to the annual Audio Video Show and the targets are music lovers not only in the Warsaw area or even Poland but worldwide. Over more than two decades already, organizer Adam Mokrzycki has established rock-solid trust which doesn't disappoint his exhibitors or visitors. Manufacturers, importers and dealers can safely invest in exhibiting, visitors aren't let down by poor venue or exhibition quality. What's more, the show's quality and thus appeal are still growing.

And this show is big, really big. We've responded to its lure for now the seventh time. We have seen it grow in size and intensity so much that it has become impossible for us to visit everyone and pay attention to everything. The show covers two hotels and the National Stadium. One of the hotels has its rooms emptied and re-purposed as exhibition/listening rooms across more than eight floors. The National Stadium's two top-level VIP suite floors are cleared and converted for audio/video purposes; plus there is a big area for live music and presentations. Though opening hours across the three show days are generous, it is no longer doable to take it all in. Fortunately the show offers an elaborate catalog—this year even a full English version—which enables visitors to plan and plot a route to cover the rooms and products of most interest to them.

One of the very positive developments of this show over the years have been its many seminars and presentations. Entering an exhibitor's room to wait politely for a good spot to listen to their music is one option though only gives an impression of that moment in time in a less than ideal situation. There is the noise of other attendees, doors open regularly to let sounds bleed in from adjacent rooms to name just a few of the distractions. Rooms with a closed-door policy whose visitors sit in dead silence are another option but don't work perfectly either. Waiting in a hallway for the next slot to open up without interaction possibilities between room visitors can be a damper when part of a show's allure is to interact with fellow hobbyists and exhibitors alike. Music is emotion, isn't it?

Visitors this year could spend all three days at seminars, workshops and presentations. Though most were held in Polish, there also were English seminars like those by Michael Fremer, on setting up a turntable every day, and Ken Kessler's, on reel-to-reel tape enjoyment. Music or more specifically album presentations to meet the artist are of course international in appeal and there were plenty of those.

Part of the show's excellent service is a free shuttle bus which, door to door, connects the hotels to the National Stadium on a steady 15-minute schedule with minimal wait times. The culinary aspect includes both hotel bars and the Stadium's extensive catering to offer grub and liquids at decent prices so visitors can put up their feet, munch, chat and relax.

Music is a very important aspect of Polish life. When you fly into Warsaw, you land at Chopin international airport. There are more countries with airports named after musicians like Liverpool's John Lennon but a country with two such airports—Poznan's Henryk Wieniawski airport is Poland's second—is more rare and points at a deep appreciation of music. It is no wonder then that the annual Audio Video Show has become the largest consumer show in Europe, the more so as it still primarily caters to the Polish music lover. The growing number of international exhibitors and attendees remain more marginal but are indicative of the show's still growing global standing. 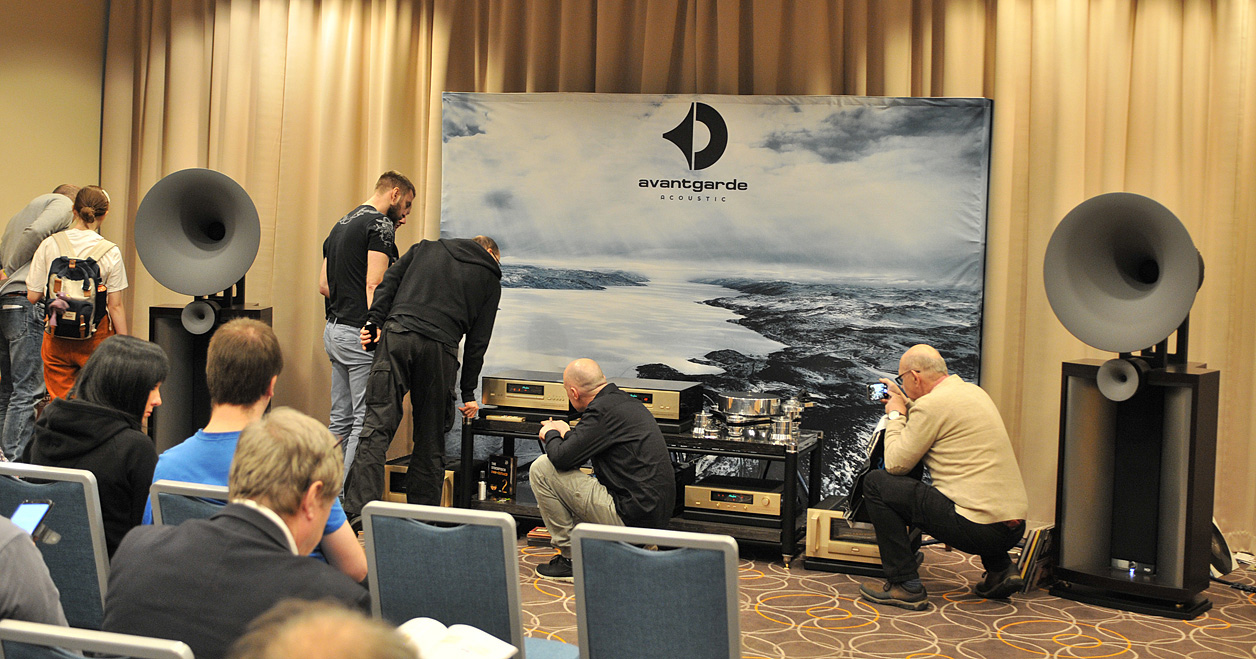 That of course has a financial reason. Charity is fine and necessary but the audio/video industry is no charity. Sales are necessary to survive. If those can come off in a fun way, all the better. With a very willing pool of 14'500 music lovers concentrated in one city across three short days, the show's lure for exhibitors has grown ever more irresistible. No wonder big brands and their local distributors turned out en masse. It is they who occupied the larger rooms or ran multiple rooms across the various venues. With larger marketing budgets, these companies can cover the associated expenditures. Here something interesting happens. The biggest names are now attracted to the show's potential sales opportunities, the show's attendees are attracted to the big names whose advertising reaches them all year around… but there's more. With larger budgets spent by the bigger firms, the show's costs are more easily defrayed to leave room for smaller exhibitors to join. They can occupy the smaller spaces suited to their budget and simultaneously be the lubricant of innovation. These smaller companies or even one-man b(r)ands can and do think out of the box, something the big brands can't afford as their risks of failure become too large.