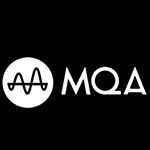 Why would anybody jump into the MQA debate now that the fad is fading and most seem to converge towards a consensus that it really wasn't much more than a way to get people to buy new gear and new copies of the same recordings all over again? Primarily because it is now possible to express a more balanced opinion without being torched – and most importantly, because I believe MQA is not useless, just not worth enough to pay for.

For those blessed with selective reading who managed to avoid the MQA media frenzy over the last 2 years, my basic non-technical understanding of MQA is of a process from recording to decoding which 'folds' or losslessly compresses higher-resolution data into a smaller data stream; and which can be decoded by non-MQA DACs with a resolution limit while MQA DACs access the full data stream. In other words, MQA works with all DACs. You just don't get all the juicy bits.

With the arrival of the Aurender A10 in my arsenal, I finally had a revealing digital front end which could process MQA files to allow me more extensive testing than I was able to do at audio shows. One key factor needs to be clarified upfront. Since the Stereophile review of the A10 which uncovered incompatibilities between non-MQA digital filters and MQA processing to deteriorate the quality of non-MQA PCM, Aurender deactivated those digital filters. Now all bits pass the same processing engine for better or for worse. One could argue that running non-MQA files through MQA processing is sub-optimal but my experience says that the Aurender with this scheme easily surpasses the SOtM DAC on PCM and comes close to or matches the LampizatOr Golden Atlantic depending on format… so no slouch by any account. 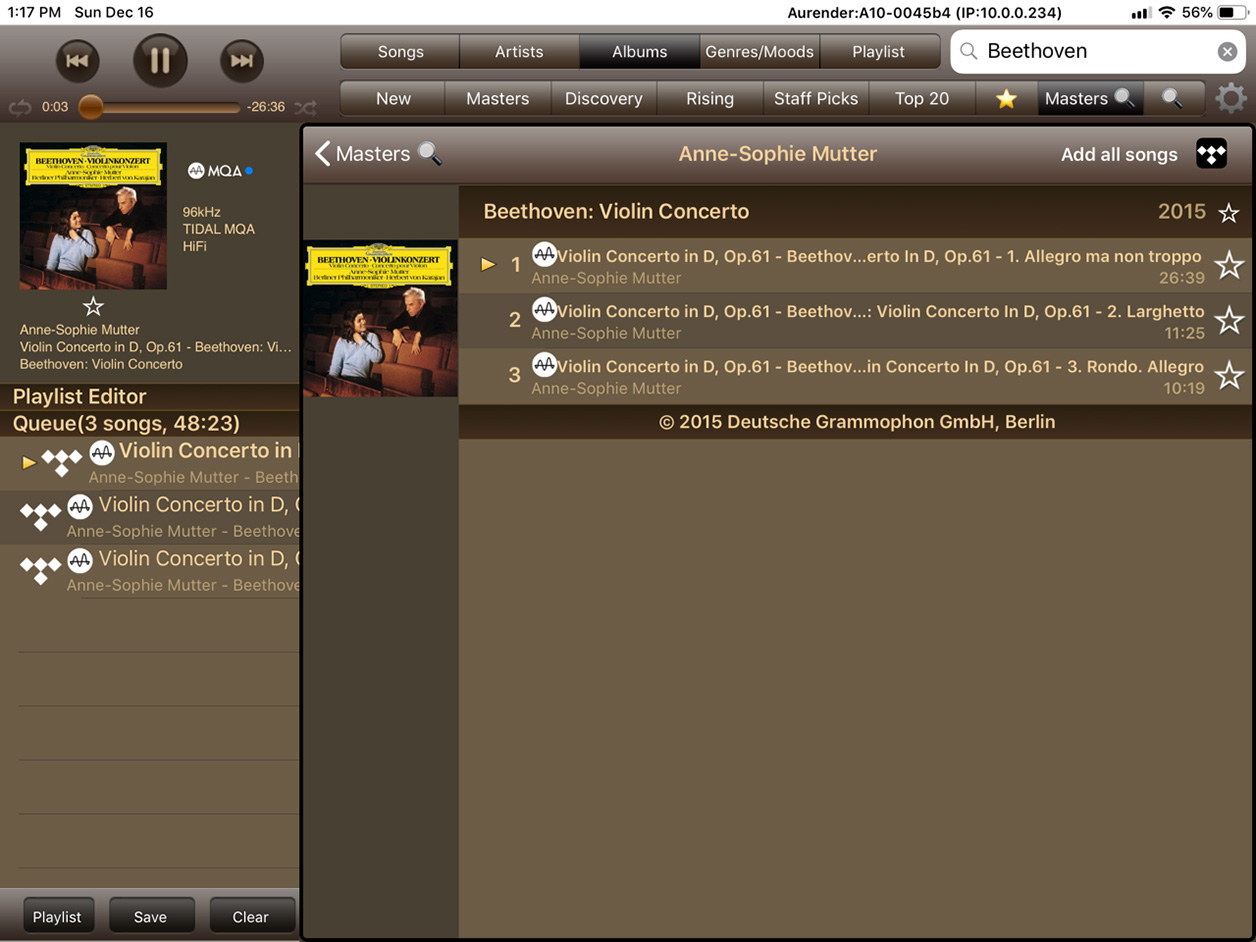 The biggest challenge with comparative MQA sessions is provenance and knowing whether your files derive from the same master. My first test had me sold on MQA within the first minute; until it became obvious that the masters were very different. I was very happy to see that Tidal offered an MQA version of Anne-Sophie Mutter playing Beethoven's Violin Concerto under Herr Karajan's baton. It has been a favorite of mine for close to 20 years and a record I know like few others. I played my 16/44 .flac CD rip and it sounded as usual – thin and not filling the room but her violin simply jumped with unfettered youth and passion. Moving to 24/96 MQA in Tidal changed all that. The violin fleshed out and its harmonics became obvious. The orchestra filled up and blossomed. The treble moved from lifeless and dull to shimmering. A slam dunk for MQA if it weren't for orchestral instruments at massively different relative sizes which also seemed to have moved forward or back in the orchestra. That just wasn't an effect of higher resolution or a different codec. That was a different master whose engineer chose to ride the gain of his multiple tracks differently. 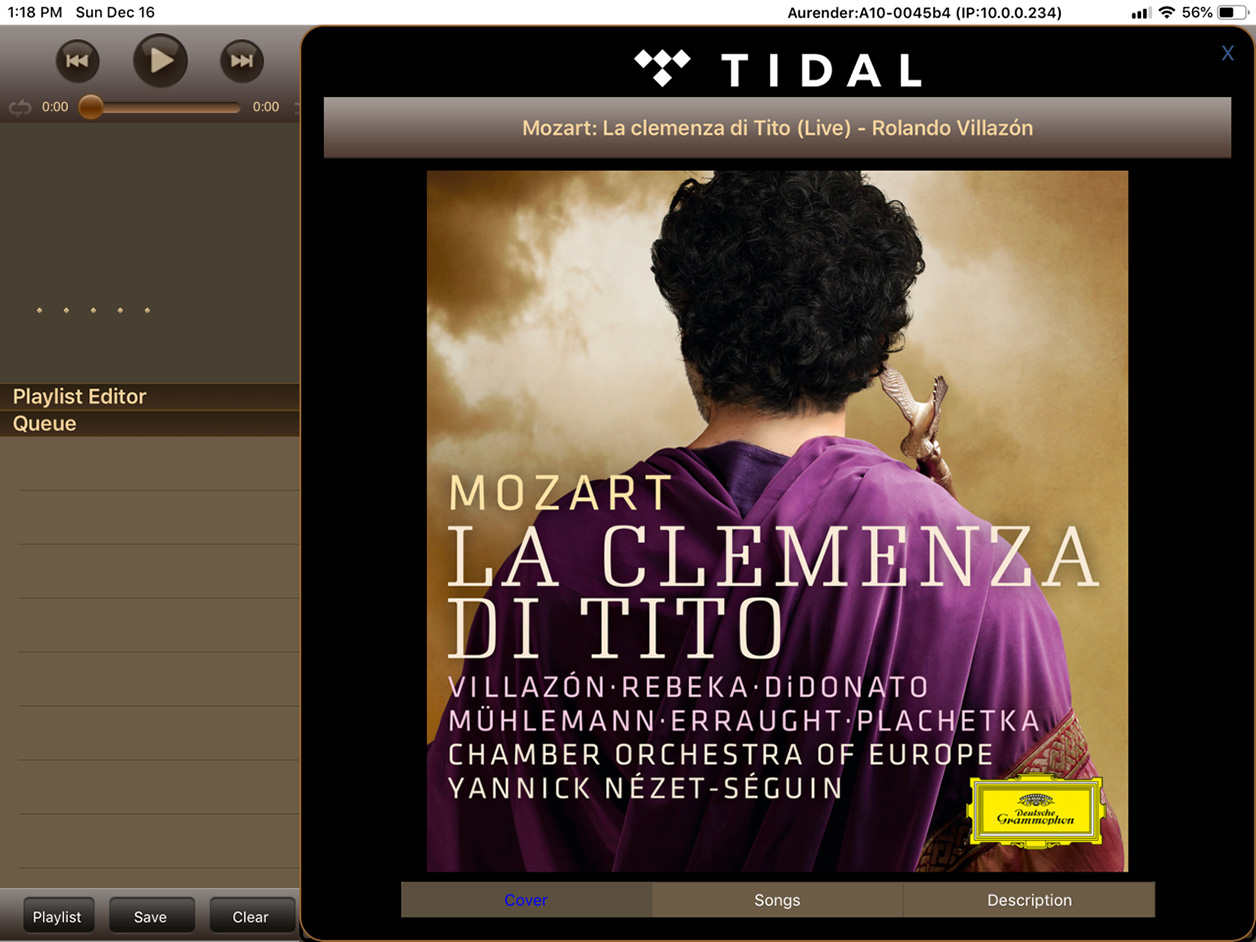 So much for my first effort. Next I decided to only focus on recent recordings which were less likely to have been through multiple mastering versions already; and to only pick Tidal recordings to try and keep everything else equal. My first trial settled on Mozart's La Clemenza di Tito directed by Yannick Nezet-Seguin. Tidal had a 16/44 Redbook and 24/96 MQA version which I assume descended from the same master. The two recordings were slightly different, with a bit more space, separation and air for MQA. It was a small but audible difference which you'd expect between a well-mastered uncompressed 16/44 file and its higher resolution version. The 16/44 was very enjoyable. Except for the most fussy, the gains from MQA were not transformative. I listened to the entire opera in MQA just because I could, not because I felt compelled to by superior sonics. 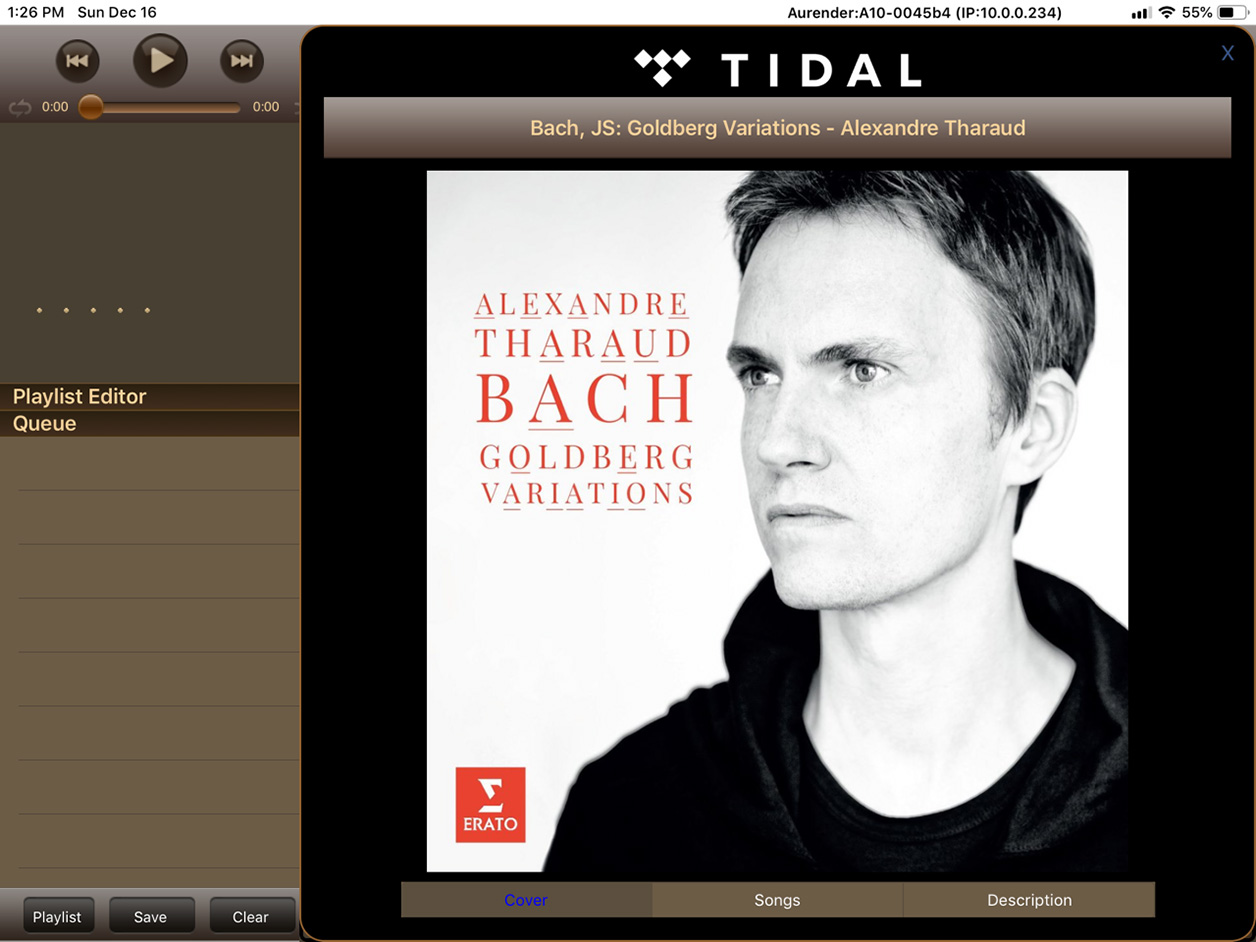 Moving to Alexandre Tharaud playing Bach's Goldberg Variations, differences were slightly more pronounced and very much what I hear between quality 16/44 and 24/96 recordings of the instrument. A piano is so complex and resonant that it seems that all its harmonics beneath the dominant chord have a hard time to be fully and credibly captured. Again the 16/44 version was very enjoyable but in this case the higher-resolution MQA version gave significantly more complex insight into the instrument. What I cannot say is whether MQA had anything to do with it. The gap was no different or greater than what I typically hear for well-recorded piano between CD quality and high-resolution files.

I therefore needed to find a more valid comparison. After scanning Tidal for MQA versions of high-resolution files I'd bought from Qobuz at some earlier point, I came back fairly empty.handed. But 2L, the innovative Nordic label, to the rescue. They offer a number of tracks as free downloads and in a variety of formats. I found their Nordic Sound album as an MQA stream as well as some tracks in 24/96 and even DSD. Being genuine, 2L even identify new MQA masters if they created them so that people don't compare apples and oranges.

On Mozart's Violin Concerto in D major which was initially recorded in DXD aka 352.8kHz PCM, DSD brought nothing to the table. If anything, it dulled transients a bit. The MQA file played from the A10's hard drive sounded identical to the 24/96 .flac version. As hard as I tried, I could not reliably identify any difference. MQA streamed from Tidal—which I assume was the exact same file as on my hard drive—sounded a bit more dull and fuzzy; not as clean and crisp. The difference was small and probably due to the fact that my Internet interface isn't exactly optimized yet (generic cable with Apple Express broadcasting whole-house WiFi). All in all, the difference between local hard drive and streaming was surprisingly small yet repeatable and audible. All those files sounded more open and airy than their 16/44 equivalents but the differences were small. At least in this case, the same master at the same resolution, both played from hard drive, provided no audible advantage for MQA. 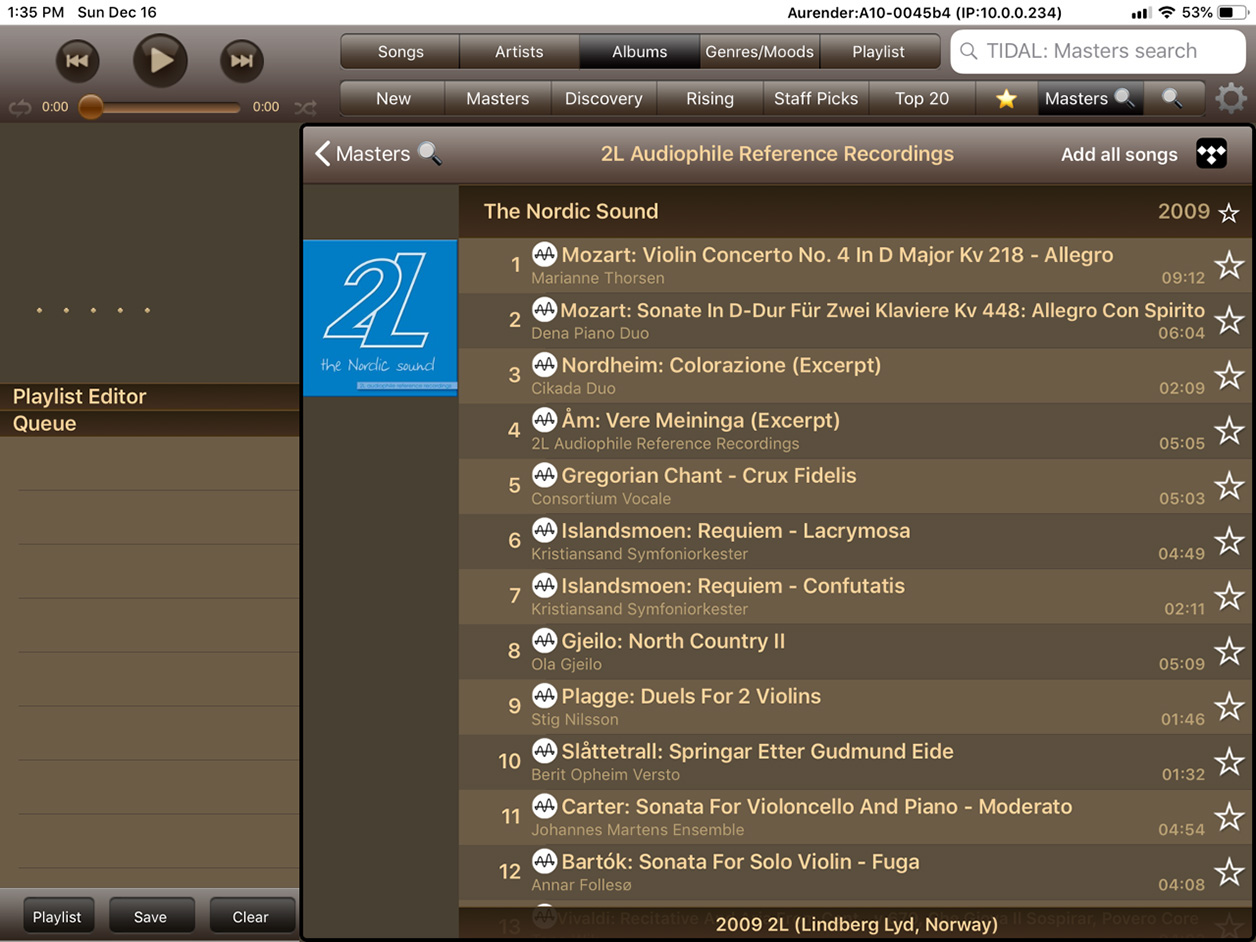 I tried again with Haydn's String Quartets for the exact same results. I was starting to see a pattern. Wiser from the earlier Tharaud comparison, I decided to experiment with one last track, this time very well-recorded piano from Ola Gjeilo's North Country II. And I pretty much came to the same conclusions again. DSD added nothing to these PCM recordings. Over the A10, it actually slightly dulled the leading edge. MQA streamed sounded slightly gray compared to MQA via the A10 which I could not reliably differentiate from the 24/96 file on the hard drive. The only difference once again was against 16/44 where the piano sounded slightly smaller and a bit more metallic.

What did I take away from all this then?

First, MQA as a recording process doesn't seem to deliver any audible advantage over against the same resolution non-MQA master. I qualify that comment as applying to what I heard in my system. Your mileage may vary. In my context, MQA simply offered nothing I would pay for.

Where I did find value was that MQA's smaller file sizes make it easier on Tidal to stream higher-resolution files while better protecting their rights. The differences were not huge but depending on the recording ranged from not meaningful to audibly better (and I am not talking about obviously different masters). Personally I still wouldn't pick gear based on being MQA compliant. But neither would I walk away. Pick what sounds good to you and take the added feature if included but don't lose sleep if it isn't. 16/44 streamed Tidal is every bit as enjoyable most of the time and has more than ten times as many titles in its catalog than MQA. If MQA playback came as part of your gear like it did for me with the Aurender A10, take advantage of high-resolution streaming. It won't hurt and on some odd albums will even sound meaningfully better…