Amplification & refinement. Regular readers know. My path across the audiophile wilderness of many flavors has presently settled on class AB amps of very wide bandwidth, lateral Exicon Mosfets and mostly DC coupling. I call their general flavor lit up all over. It's not the imbalance of isolated HF forwardness but the same lucid mode applied across the bandwidth. It's why the open-baffle floating Raal ribbon earspeakers are my ultimate transducers. It's why with speakers I aim to duplicate their signature even though room gain and drivers of higher mass coupled to boxes throw up road blocks. Reality bites. Still the goal remains. A key contributor to my pursuit is this type amp. Soul VI combines the speed of clean timing and high dynamic reflexes with unusual sonic mass. Part of the same profile is a tamer take on the brilliance/air regions. Again it's the balance one hears in live amplified rather than pure acoustic venues. Given my acoustic leanings, I fancied our fast amp contingent by Crayon, Enleum, Goldmund and Kinki over the darker thicker class A examples from FirstWatt and Pass Labs. Know thyself. Rather than inject more weight or fat, I hankered for a bit of turbo boost. Here it seemed that extreme damping was disadvantageous, likely because Zu's hard-hung driver applies high self damping already. When it came to crowning my amp favorite, the Kinki EX-B7 monos and Goldmund Job 225 got knocked out of contention perhaps partly for their very low output Ω. 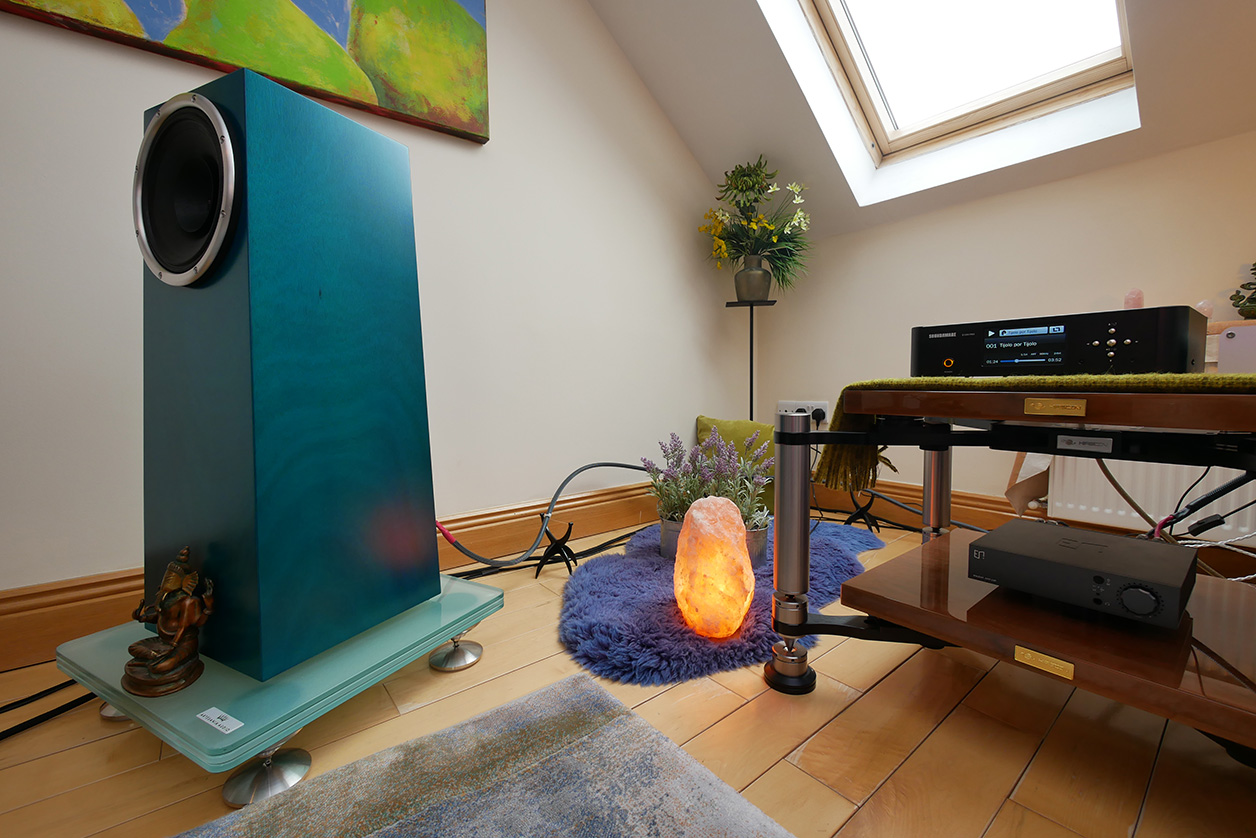 Then it was a close call between Crayon's 60wpc CFA-1.2 and Enleum's 25wpc AMP-23R. I ultimately settled on the latter for what I heard as still superior sophistication across the presence region. It's where the high-power class AB 125/250wpc specimens had, particularly on piano and massed strings, thrown up the occasional flare. Imagine a windy lake with rippling surface. When the sun hits certain micro waves at just the right angle, it causes momentary bright refractions. Those disappear as quickly as they occurred. The sonic equivalents were sudden small response peaks. Those probably coincided with small amplitude wiggles in the whizzer doubling as horn mouth for the tweeter. The warmer/tamer amps didn't trigger them. With the right material, the high-power speedsters did here and there. In my hunt for the ideal personal balance, that rare flashiness, textural overdamping, Gemütlichkeit and excess tonal weight all became amp eliminators. It's how I settled on the Enleum as successor to Bakoon's famous AMP-13R. Being used to 20-40Hz coverage from Dynaudio's 18S sub, I naturally wanted it also on the Soul VI. To be sure, running it solo won't telegraph any lack. But if you know the difference that a force-cancelling clean sub makes and play music whose synths exceed the limits of acoustic instruments, you'll want one. Obviously Undertone and Submission are two such options in Zu's own catalogue. One of the latter graces our simple 2.1 video system where Soul 6 would bump off our usual German Physik HRS-120. Sound isn't just music and song. It's dialogue as well. If you despise the current trend of self-absorbed actors mumbling under their breath for 'extra realism', you'll appreciate any extra dose of speech intelligibility you can muster. Would the big coax deliver?

Cue an early episode of Lewis. It's a now shelved BBC series of brainy crime dramas set in post Inspector Morse's Oxford. The pastoral title score begins. "That really sounds very rich," comments Ivette without prompting. Later on there's a phone call embedded in location din. She hits 'pause' to check that it wasn't our line. "There are so many different distances to sounds now" she muses. "Usually it's all somewhat flat." Later on during outdoor action on a spectacular Town & County estate, "birds are chirping all around me and the dogs seem to be way out in our backyard". There's delight and surprise in her tone. More comments to that effect follow. I couldn't have scripted them better myself. It was delightful to see just how easily key traits of the Soul 6 registered on an attentive listener not pre-loaded by audiophile vocabulary or expectations based on looks and tech. 'Richness' was Ivette's very concise word for tone density and color saturation. Noticing many different distances and extra depth was her way of describing unusually distinctive layering. Pointing at quasi enveloping images well beyond the outer speaker edges spoke to precise tracking of out-of-phase trickery. Ivette didn't need to know of point-source dispersion, filter-free phase coherence, pert timing or the tonal qualities of a big paper woofer doubling at mid/tweeter duties to appreciate their effects loud and clear. Signed "coaxially yours"? In casa Ebaen, definitely!

In short, this short Zu makes for a brilliant video 2.0 speaker, no center channel required or even desired.

By way of intermission, let's take a bow at The Audiophiliac's routine segment "so what did you really think" – all of the above plus this: by making Soul 6 so short, Zu practiced a bit of function follows form. I wouldn't change a thing since it opens many doors to end up in many places. I would however requisition Zu to author an optional hollow MDF plinth. Paint it the same flecked black as Soul's base plate is already. Do a basic screw bottom so clients can fill the interior with sand, cat litter or lead shot. Keep its walls squared off to stay simple or get fancy and continue the speaker's 2° angle. Add four threaded inserts for spikes, footers and levelling, matching receivers on top. Perhaps offer two heights, 13cm and 25cm. That'd make for a far cleaner finished look than jerry-rigged DIY solutions, for those clients whose routine exposure to the tonal balance of unamplified live concerts has them prefer listening to the big coax on-axis not just horizontally but vertically too. Soul 6 looks so good as is that it really deserves a purpose-sized/finished plinth for such applications. At least that's what I think. Finally on my Soul to-do list is a comparison by contrast to Cube Audio's Nenuphar v2.