D-day landscape. From Jonathan Valin's Abso!ute Sound review of the $32'500/pr Noble Line N15 monos by MBL: "…  the N11/N15 combo did not have all of the treble-range eccentricities that I remembered from earlier-gen Class D. Where Class D's top octaves used to sound as if they were roughened in the low-to-mid treble and abruptly rolled off above that, the MBLs' high frequencies did not. (They were just a bit on the soft, sweet, dark side with a relatively insignificant reduction of 'air'.) For another, the N11/N15 did not have the almost-digital flatness of aspect in the midrange that I also remembered from early Class D… And in the area where Class D was always at its best, the bottom octaves, the N11/N15 did not lose a step, sounding just as powerful, tightly controlled and deeply extended as earlier Class D, with (as noted) the added bonus of three-dimensional bloom. Though the big, robust bass range of Class D was always its strong suit, it was also a weakness in that in combination with the perceived roll in the top octaves, it tended to make older-gen switching amps sound quite dark or 'bottom-up' in balance." Then he drove big Magico and MBL Radialstrahler, not the type single-driver high-sensitivity widebanders my SET loaners were limited to. 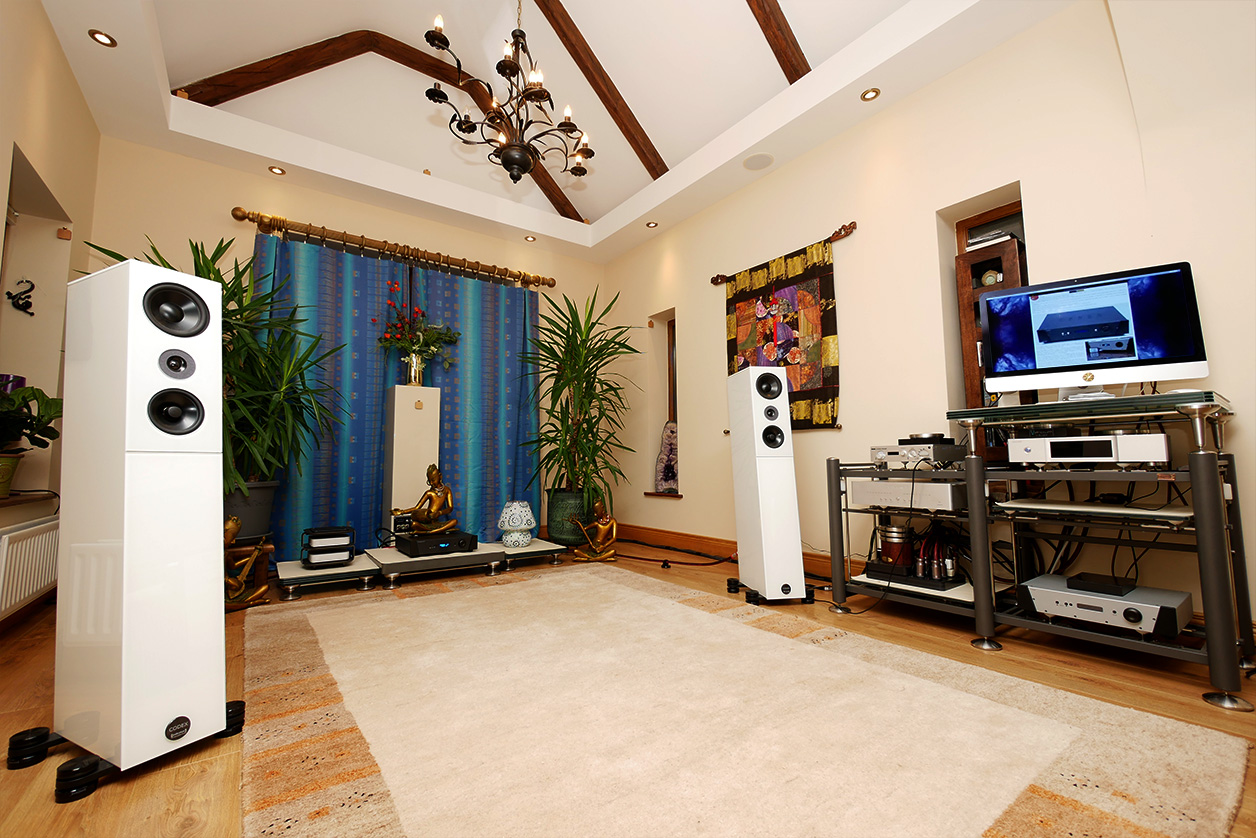 With our €10K/pr Audio Physic Codex also well off that 6-watt SET reservation as 4-way speakers with complex filters and a front end of iMac ⇒ Audirvana 3 ⇒ USB ⇒ Soundaware D300Ref ⇒ I²S via HDMI ⇒ Denafrips Terminator, the STI-500 exhibited decidedly less air and associated 'electrified' or quicksilvery charge than the seriously costlier 1MHz LinnenberG Liszt monos. It exhibited less dynamic shading with slower less exuberant voltage swings and softer attacks. Unlike in JV's case, the reduction of air wasn't insignificant but here our class A/B lateral Mosfet monos are major experts of the discipline. Very much like JV's subjects, the Wyred didn't suffer any flat midband but rather, celebrated obvious bloom. Unlike his early encounters of a bottom-up perspective, the Wyred didn't imply anything ponderous, murky or pear-shaped, simply dark-ish, generous and gemütlich in general. The more I primed its pump however, the more virtual torque kicked in. At whisper to low levels, the sound still was a bit compact, distanced and vague. Hence it wasn't ideal for midnight sessions when the rest of one's household already dreams. Once out of its 1st and 2nd gear, the sound stepped out. It expanded and quickened. Even the treble unfolded. The remaining observations already made in earlier paragraphs did still factor vis-à-vis E.J's $3'495 STP SE-2 preamp driving €8'500/pr LinnenberG monos. That was neither a fair nor meaningful comparison other than reference what would still be possible with a far weightier budget in this room on these speakers. For $1'695, even a Goldmund/Job 225 would be twitchier, more lit up and resolved though also coarser in the treble, liable to shift into steely gear on edgy bright fare and thin out by more forward contrast.

Which, again as happened to Jonathan Valin, deposits us at fun. Once in its happy zone of stretched legs aka that sufficiently opened throttle, the STI v2 was big very uncomplicated fun. The operative qualifier is uncomplicated. There's a form of rarefied audiophile magic diva-esque in the various—suspected but also perfectly mysterious moon-phase—conditions under which it happens. Even if one were lucky or observant enough to harness it regularly, it still tends to be very selective about just the right kind of tunes. It's a fuss-pot proposition. With the Wyred, any such cautions went like smoke on the wind: immaterial poof. I could play anything and never leave the safety zone of good honest fun. In headfi terms, the STI-500 v2 was a Meze Neo 99, not a finicky Sennheiser HD800. 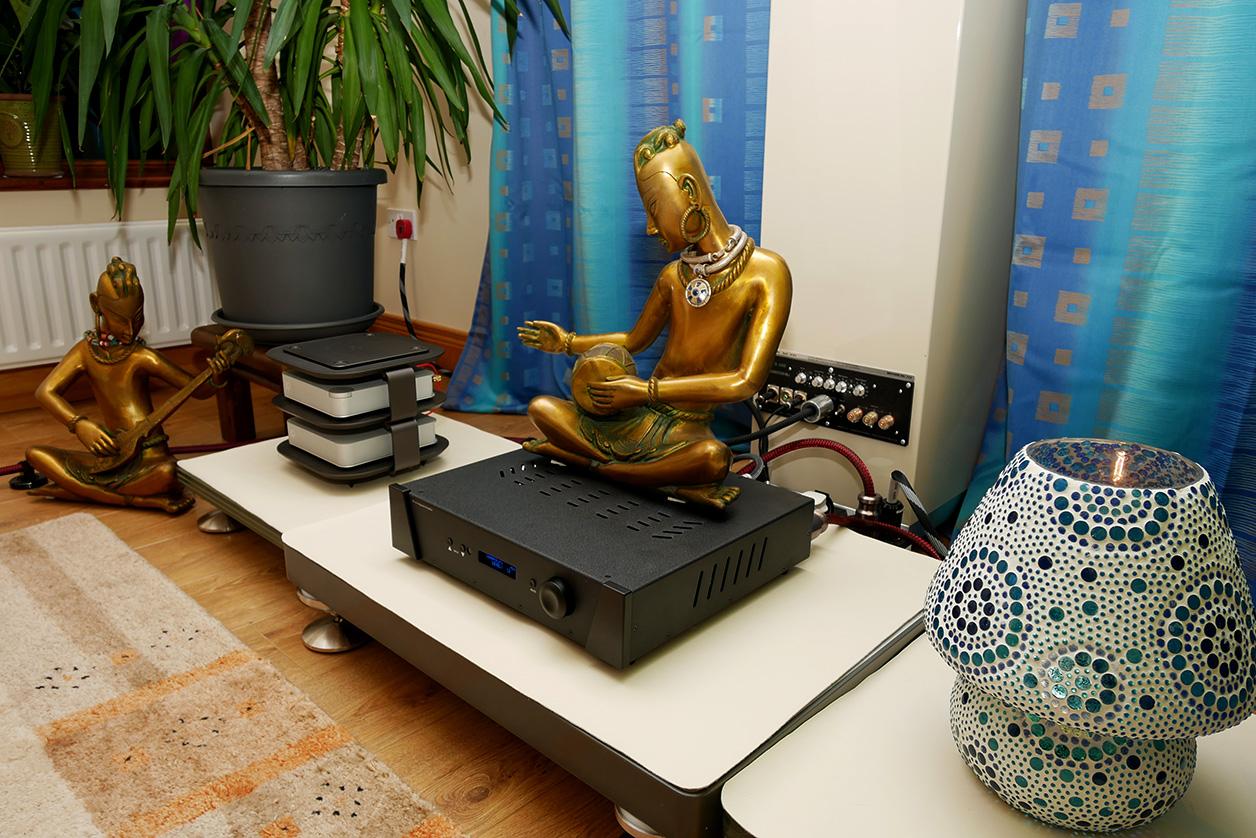 On a good day, the Sennheiser operates in a different league. But in rainy Ireland and with our music-first software library, good days are the exception. It's why the HD800 are benched in the utility closet with the washing machine, dryer and hot-water tank. Meanwhile the Meze plug into the 3.5mm jack of my active Swiss computer speakers on my work desk to do Spotify, Tidal, Qobuz, YouTube and the occasional CNN broadcast on a daily basis. That's reminiscent of Marie Antoinette's famous "let 'em eat cake" comment. It's fine for the aristocracy, those blue-blooded audiophile productions. But commoners live on bread including the white sort which must be toasted to be edible: music they love whose production values tend to be middling if not full-on compressed loudness warriors. Into this huge breach steps the Wyred to holler a happy hello. With practically endless power and obvious readiness to do it big, beefy and robust once in its torque window, it's an ideal uncomplicated two-in-one component for John Darko's wo/man in the street who also enjoy the occasional high-octane party. In our digs, I didn't really get past 25 unless a recording reserved unusually wide dynamic range for the occasional peak to have the majority at minus 30 or 40dB below max.

Bloomy not dry. Solid not wispy. Dark-ish not lit up and forward. Robust not airy. Of fine but not intense resolution to play it perfectly omnivorous, not like that vegan one can't ever take out to a normal restaurant. Capable of driving complex low-impedance multi-way speakers (so should be ideal for those entry-level Magnepans). Sturdily built. Free of noise. Could be left on for weeks without heating up room or utility bill. Proven technology. Proven designer. Proven brand. Priced attractively. Even without the upgrade option, Wyred4Sound's STI-500 v2 nets a happy score card and top marks for real-world usefulness. Added up, that spells out r-e-l-e-v-a-n-t.