In the beginning, the Engineer created the block diagram. The sheet was white, deserted and empty. The breath of creation hovered over it. The Engineer said, "let there be sound!" And there would be. Soon. And the evening and the morning were the first day. 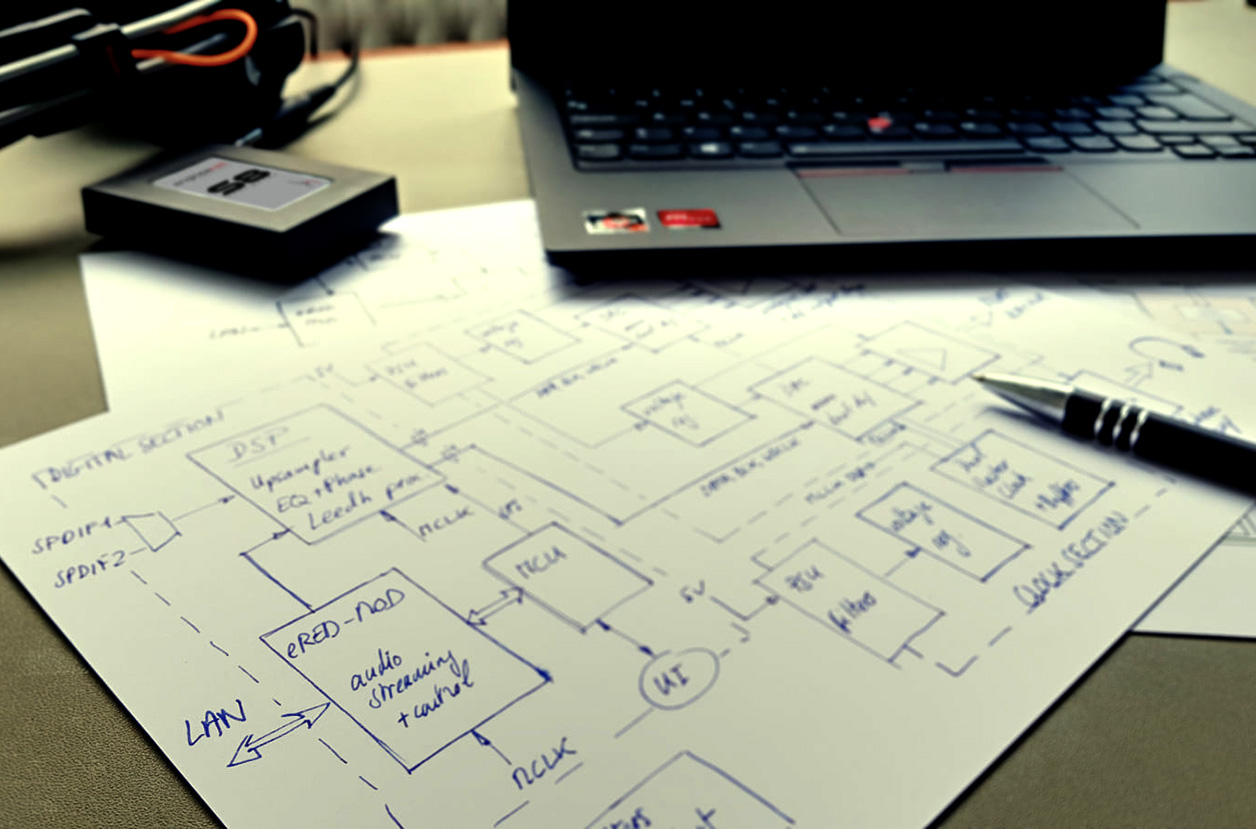 The next day, the Engineer sketched and divided the elements. On one side he put the purity of the lines, on the other the essence reduced to its purest expression: technology and aesthetics. And it was so. And the evening and the morning were the second day. 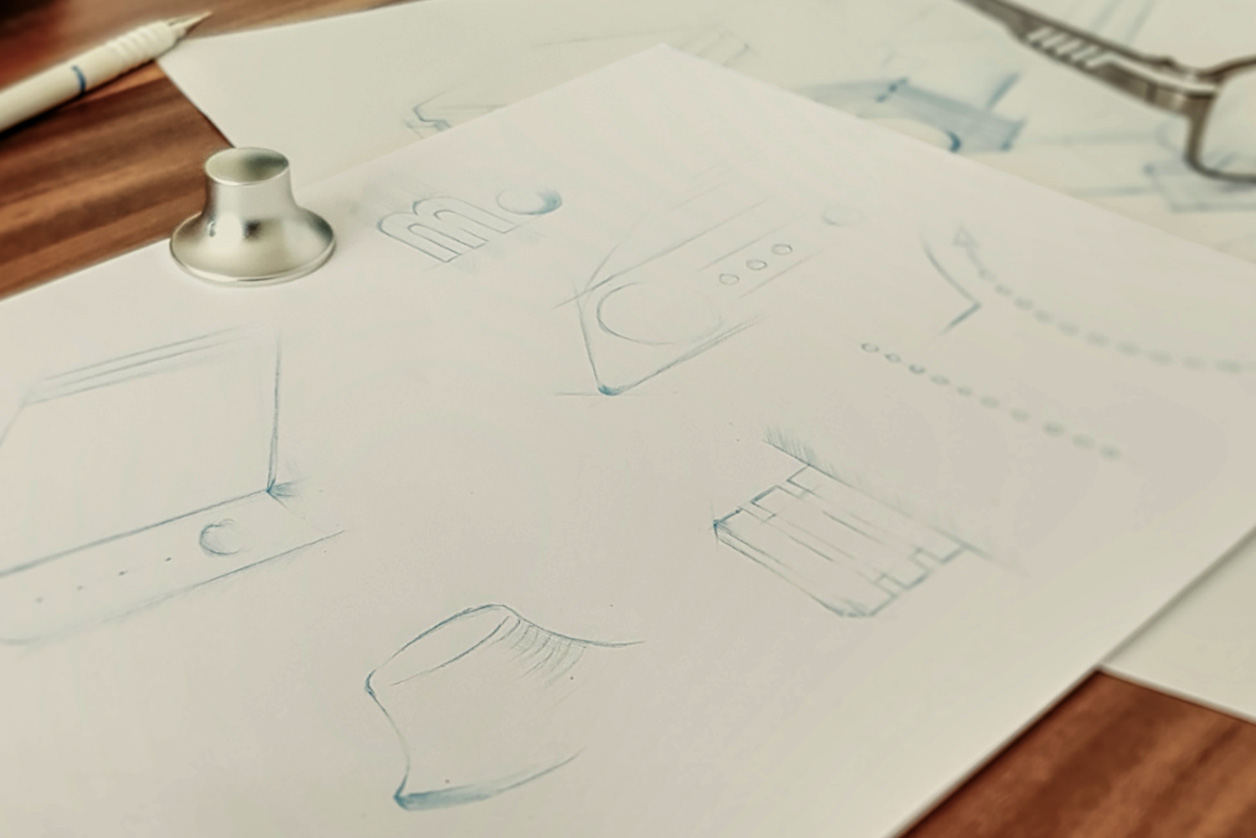 Then the Engineer said "let the elements come together and form a whole and produce extraordinary sound". And the Engineer saw that it was good. He was delighted. And the evening and the morning were the third day. 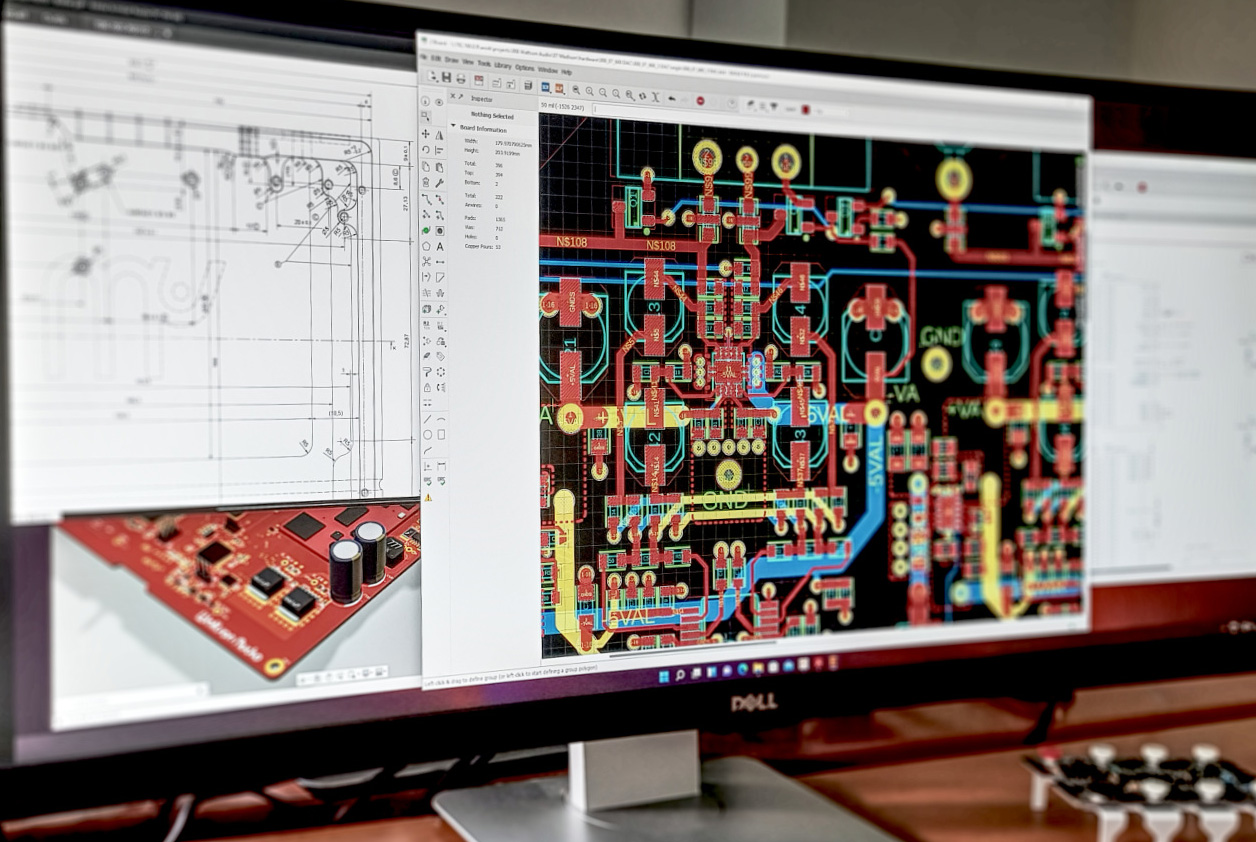 On the fourth day…

… marketing got impatient and released this YouTube video. The Engineer was only half pleased because of the dim lighting. But the knob with red dot-LED curve looked cool already. He had three more days until the promised day of rest and rumination.

The next day the Engineer organized all the steps to shape his creation with machining, painting and engraving. The Engineer saw that it was a bit complicated but good. And he was delighted. And the evening and the morning were the fifth day.

The Engineer took particular care to build a card with exceptional digital audio components. His robots created it in his own image, complex and uncompromising. And the Engineer saw everything they had done. It was Swiss so very good. And the evening and the morning were the sixth day.

And on the 7th day, the Engineer slept in. His work was done. The website had caught up with Madison, his compact DAC with digital RJ45, coax and Toslink inputs, 2.1/4.2Vrms RCA/XLR outputs plus 100mW/32Ω 6.3mm headfi. A time-domain optimized DSP upsampler traces itself back to Anagram Technology, conversion is by dual-mono Cirrus Logic WM8741 chips in dual-differential mode, the analog op-amp based output stages follow on in fully balanced/differential mode to match.

As we already saw, the entire kit is ensconced in milled-from-solid aluminium. As usual, file density support is limited to 24/192 for S/PDIF but expands to 32/384 and DSD 256 for the network input. Shunning a variable oscillator, the Madison uses discrete clock generators for the 44.1/48kHz audio/video sample rate families. Dimensions are 17.4×18.5×4.7cm WxDxH, weight is 1.05kg and the power supply a "medical-grade" external 5VDC power adapter followed by 15 internal low-noise voltage regulators. "The power supplies for the clock generators, synchronization circuits and analog section perform particularly well with electrical noise of less than 1µVrms from 10Hz to 100kHz". The Wattson Music App adds bass EQ, access to online streaming services and from-the-chair Leedh volume control. Or as Alexandre Lavanchy put it, "for our new Madison streamer, we have put all our know-how into action to seek the intensity of the analog restitution and to find the emotion of the musical message beyond technical considerations. In use, the Madison must transmit the pleasure of listening to very high fidelity with optimal ergonomics. The on-board digital signal processor is extremely advanced, featuring our new proprietary oversampling algorithm. From Leedh Processing digital volume control to calculation of low-frequency correction filters and DSD⇒PCM conversion, this DSP is a key element in the design and operation of the Madison."