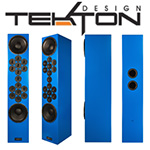 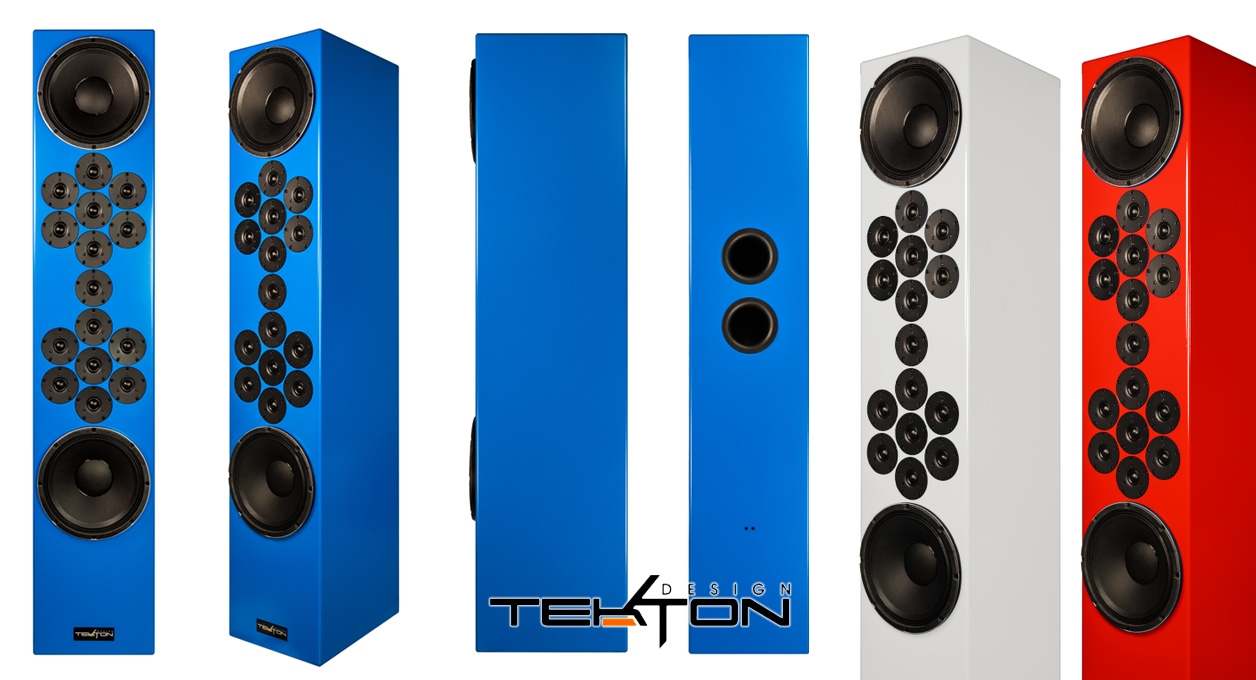 Tekton Design the speaker company have four different levels in their stable of monitors, center models, subwoofers and floorstanders. Based on size, performance and cost, the reference speakers are referred to as the flagship models. Three of these, the Ulfberht, Encore and today's new Moab, are based on Eric Alexander's latest-gen patented 15-dome hybrid MTM array. The pair of demo Moab sent for review were finished in a gorgeous piano-gloss Aubergine, a $1'000 upgrade that reminded me of the beautiful finish that once was the hallmark color of Kharma speakers. 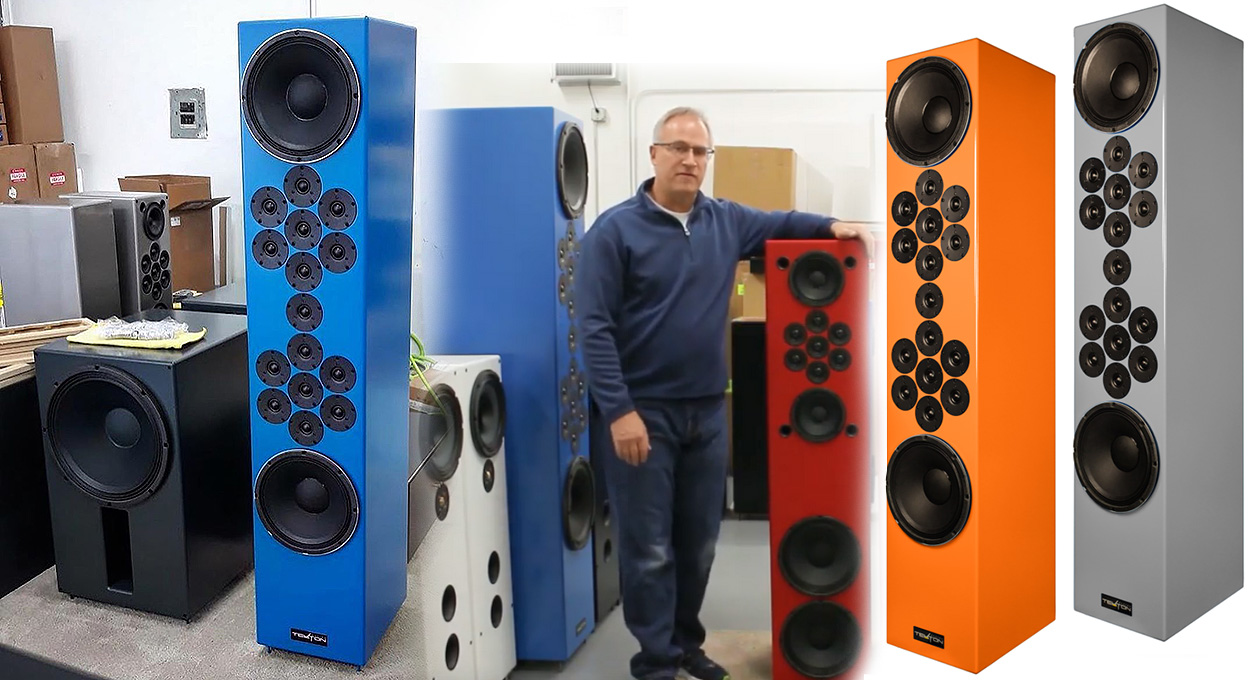 Eric Alexander with some of his models.

Moab, Ulfberht and Encore are all very large speakers. Moab's dimensions are 69 x 13.5 x 17" HxWxD and each weighs 135 pounds. Ulfberht is 73 x 17 x 16" HxWxD and weighs over 200lbs. So Moab is somewhat smaller but still imposing. Both Ulfberht and Encore are four-ways, Moab is a three-way which lacks the quad of 7" mid-bass couplers in each Ulberth. Moab rates at 98dB/2.83@1m, its bandwidth at 20Hz to 30KHz and its impedance as a nominal 4Ω.

Flanked on top and bottom by two 12" Eminence is the proprietary 15-dome array. These transducers are soft fabric domes that match the tonality of the pulp/paper high-compliance woofers. "The top and bottom clusters of 7 x 25mm ScanSpeak tweeters each do strictly mid-bass and midrange frequencies. That equates to the radiation surface of a 9" driver with 7.35g of total moving mass. Only the solo tweeter in the middle of the cabinet acts as an actual tweeter. Crossover frequencies are at 300Hz and 3'000Hz with the midrange and tweeter sections using 1st-order minimum phase slopes. The tuning for both ports is identical at 32Hz." On the back of Moab is a single pair of high-quality copper Cardas speaker posts and the two ports. The speakers ship with high-quality spikes for carpet and blunt footers for hardwood or tile floors. "The lobing topic has been long put to bed by for example the year-old Stereophile Impact Monitor review whose measurements prove that we're not producing any comb filtering." [Concrete Audio of Germany have a model with 41 x tweeters based on a patented array of the Fraunhofer Institute that would seem to exploit a similar design philosophy – Ed.] 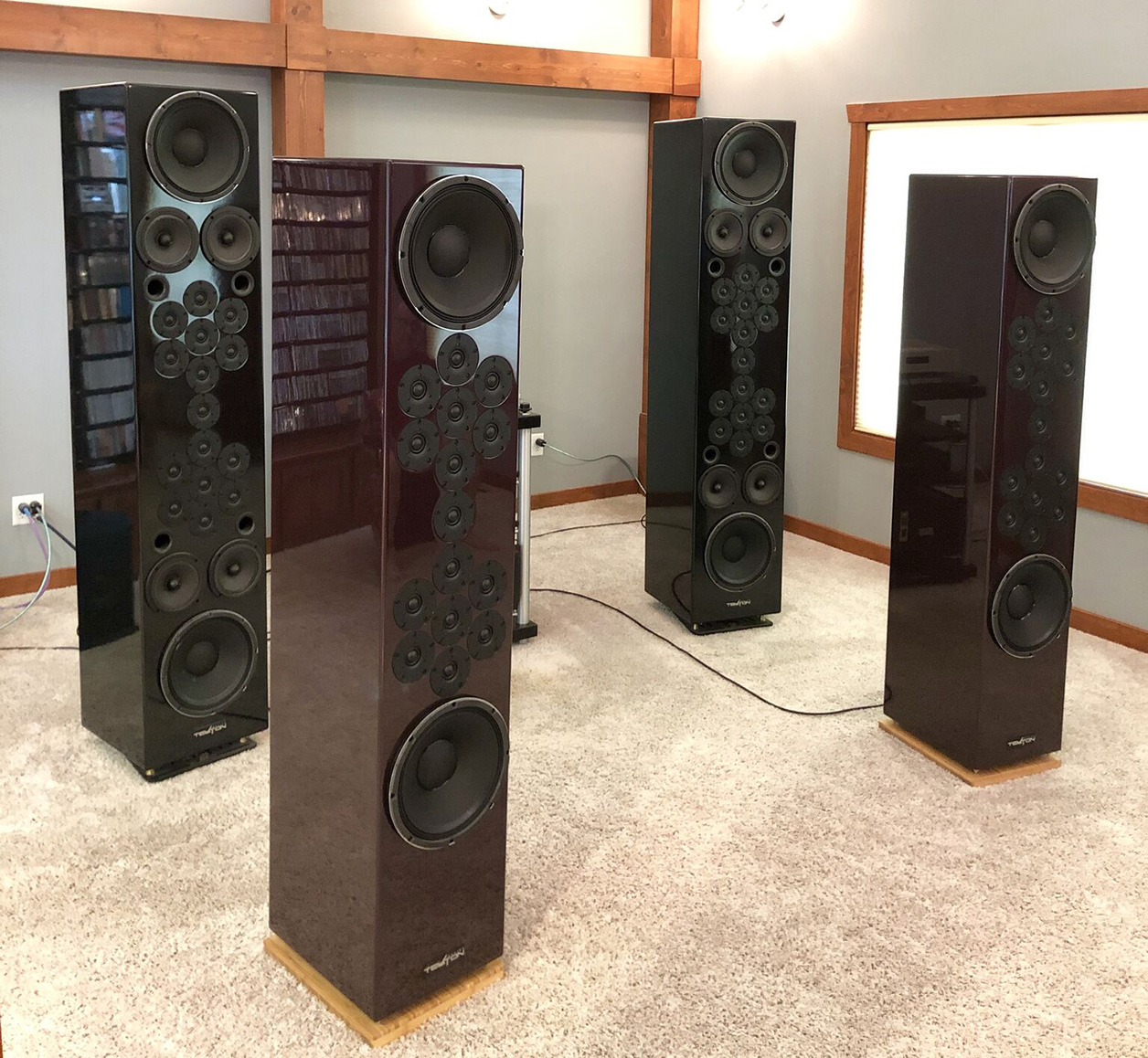 When I knew that I would review Moab, I was fascinated by two questions. At less than half of the $12'000/pr Ulfberth which had been my reference for nearly three years, how close could the Moab come on performance? If indeed Moab did come close, what had Eric Alexander done to the design to make it so? What made the most sense was to use the same music selections I had used in the Ulfberth review. All the same upstream equipment was in play. The only factor slightly different was  placement. It was no easy task moving the Ulfberth and Moab around. However, during this course of action I discovered that either performed best when placed 16 feet off the front wall and 4 feet off the sides. Moab positioned with the inner sides of their cabinets 6 feet apart and slightly toed in to aim the tweeters just outside my head. My seat was 9 feet away. 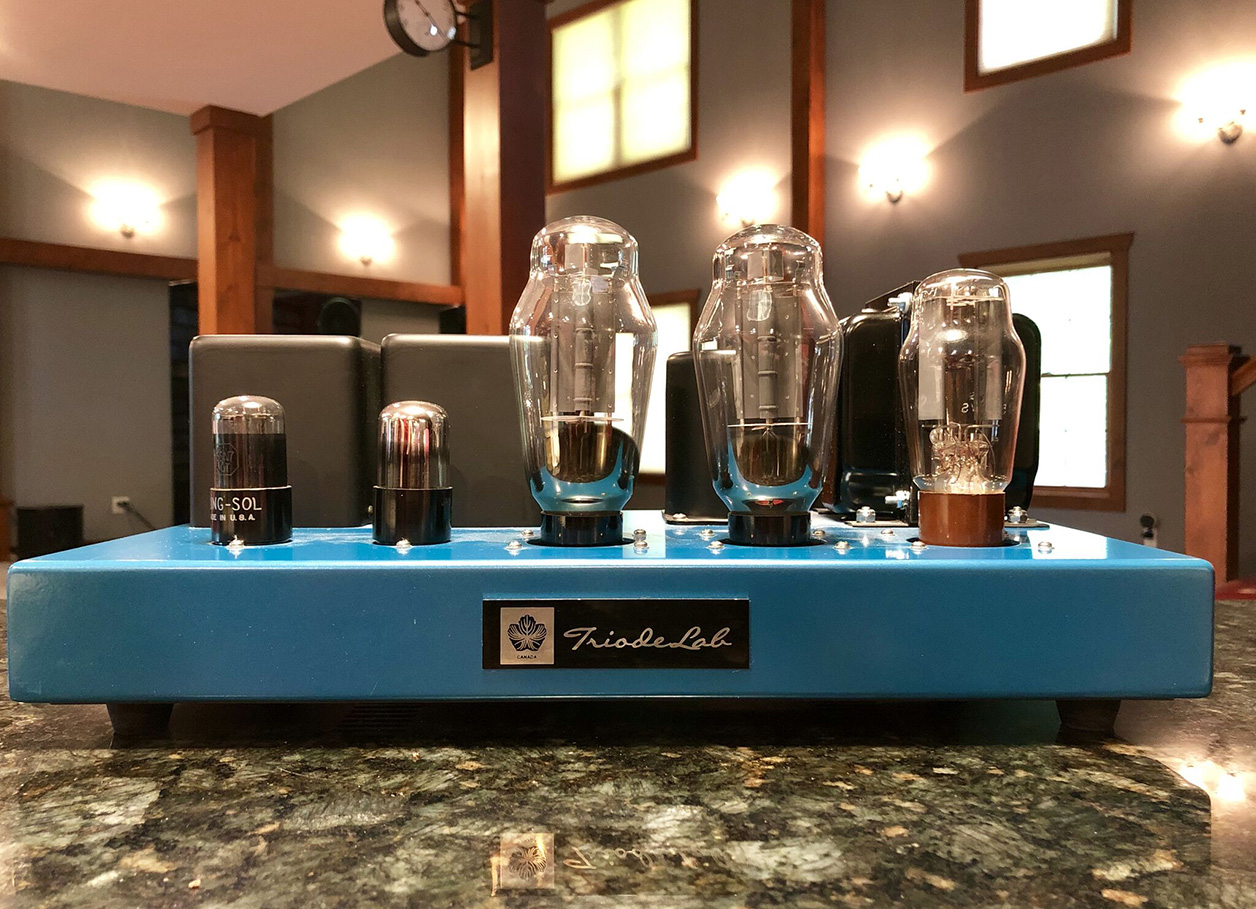 After much experimentation with both speakers, I conclude that they are relatively easy to drive because of their high sensitivity but to get to their very best relies on the most current you can provide. My best combination was a high-level tube preamplifier with a beefy solid-state amplifier like the Coda N°.8, Bricasti Design M15 and Threshold S550e.