All present Tekton Design models are easy to drive because all are of ~95dB sensitivity. However, nominal impedance remains 4Ω which can make SET tube amplifiers struggle. Eric started to receive numerous requests from customers who owned SET amplifiers both tube and solid state. They wanted a speaker not only of very high sensitivity but to never dip below 8Ω to be a 'perfect' match for their amps. They also wanted a relatively petite floorstander fit for the smaller acoustic spaces and near-field setups you'd find with many lovers of their amplifiers. Hence the Perfect SET speaker was born from these requests. 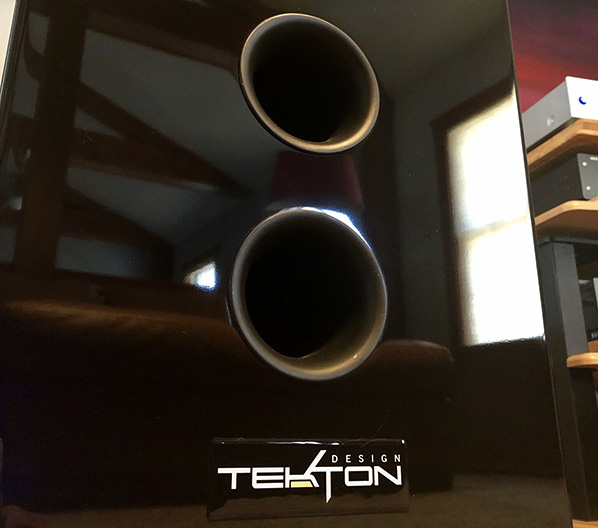 Its dimensions are 41.5×14 x13" HxWxD and each weighs 70 pounds. Its bandwidth is 30Hz – 30KHz with 96dB sensitivity and a nominal 8Ω. Towards the bottom of the front baffle above the Tekton badge sit two ports. The 12" natural fiber woofer is the same as in the Ulfberht. Then there are seven textile domes arrayed in Alexander's polygon triple ring-radiator pattern. This geometry disperses the precisely focused acoustical power of a horn or waveguide without the ringing of a flared horn's walls which constrain the sound wave. That gives superior mid- and high-frequency performance. On the back are a pair of high-quality Cardas brass posts. My Perfect SET loaners had a beautiful black piano lacquer finish as a $600 upgrade option which rivaled the paint jobs I have seen on upscale Focal and Wilson models.

The Perfect SET was placed in my upstairs near-field setup with slight toe-in and on bamboo platforms using its own high-quality spikes. The first amp to drive them was the Triode Lab Special Edition SET 2A3. To test the speaker's ability to portray organic natural timbres and tonality, I cued up my favorite jazz tenor saxophone album, Johnny Griffin's The Kerry Dancers. I was extremely fortunate to hear him live on more than 30 occasions in many different Chicago clubs.

This well-recorded album comes closest to capturing his unique timbres and minute phrasing details. The Perfect SET nailed it with a clean, pure and realistic representation of Griffin's tonality and his at times breathy reed clicks as part of his style. Another outstanding aspect the Perfect SET revealed was a realistic soundstage of great width, height and depth based on the recording. Additionally I had exactly stabilized images of density and palpability in a soundfield which extended well past the outside edges of the speakers.

The Perfect SET's superlative transparency and resolution were another aspect I quickly noticed because the smallest most delicate micro details of any music I played were on display without etching or unnatural hyper rendition. The overall fabric of the music remained intact unlike many other speakers which are highly resolved yet often sound more like dissecting microscopes. One of my favorite jazz guitarists of this generation is Peter Bernstein. When I listened to him solo on the album For Once In My Life by organist Ben Paterson, I heard faint on-string finger taps, soft slides of his hands on the guitar's neck and the decays of his notes. This added to the enjoyment of listening to the music without distracting me from the overall sonic picture of the band.