In over 40 years of being an audiophile/music lover and across six years of professional reviewing, I'd never been shocked by new gear. When I placed his $3'000/pr Double Impact speaker into my system, they completely outclassed my reference of five years, the $18'000/pr Lawrence Audio Cello. The Double Impact had the velocity and aliveness of a horn speaker without any colorations, the transparency and micro detail of a planar or electrostat, the tonal purity and imaging of a widebander plus accurate bottom-end extension to 30Hz. Another unusual characteristic was high 98.82dB sensitivity and average impedance of 4Ω. After three American writers who each owned $25K+ speakers produced their own reviews, they too sold off their reference transducers and replaced them with this $3K design. My former editor called the Double Impact a disruptive product in that it so radically snapped the cost-to-performance ratio, skewing the market to the point where it would simply be irrational to spend a lot more for far less performance. I asked Eric to put in layman's terms what his proprietary design did that was different from any other speaker's way of replicating music. 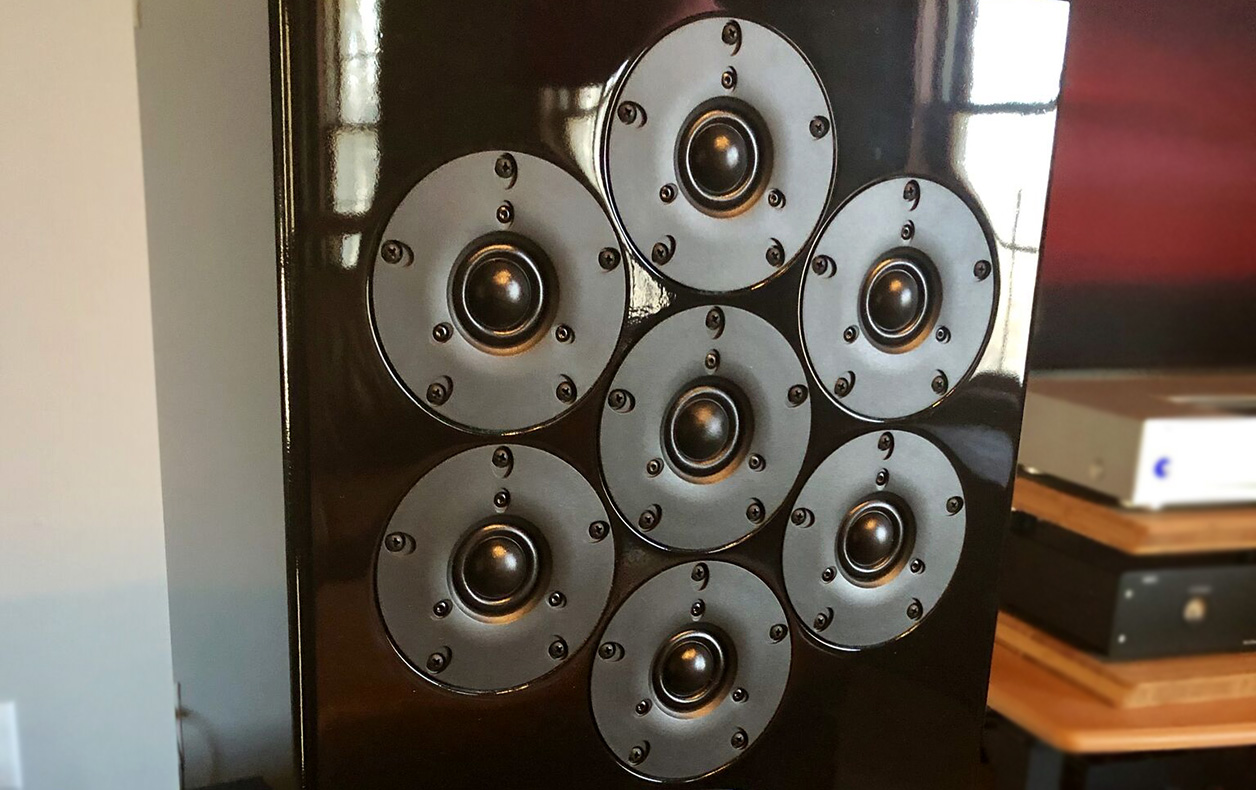 "I discerned that when source masses (i.e. the musical instrument, orchestra or human voice) and speaker masses do not align correctly, the overtones and harmonic content contained within the source must be skewed, diminished, damped and lowered in output relative to the (algorithm) of the fundamental tone(s) contained in different musical instruments. Live music contains energy, electricity and a dynamic component that loudspeakers have missed replicating because they aren't based on the algorithms which support the fundamental harmonic content/structure of the instruments they are to reproduce."

Towards the end of 2017, Tekton Design set me up to review what Eric considered to be the ultimate price-no-issue attempt to take his proprietary design to the highest level he could build. Soon after, I received the $12'000/pr Ulfberht named after a legendary Viking sword of unbreakable strength and sharpness. Here it meant a patent-pending 15-dome hybrid MTM array on a 7' 200lb 21-driver behemoth that disappeared like a small two-way, had complete continuity from top to bottom and spoke with one voice, never distorting the size of individual instruments yet pressurizing my very large acoustic space with bass to 20Hz. Another virtue particularly for reviewing purposes was being a true conduit which passed accurately whatever I fed it with upstream gear. I purchased the review pair as my new reference for the large downstairs system.

My final prior review on a Tekton Design speaker, the $2K Double Impact Monitor, took place in 2018. It was the first application of Eric's breakthrough design in a stand-mount 9-driver speaker. It turned out to be a superb performer which in smaller acoustic spaces could give most of the performance of the large Double Impact with surprising bass extension without visually or sonically overloading the room. With this brief overview on my experience with Eric Alexander's proprietary designs as the new generation of Tekton Design speaker models, it's time to get to today's subject, his newly introduced Perfect SET floorstander retailing for just $1'800/pr.