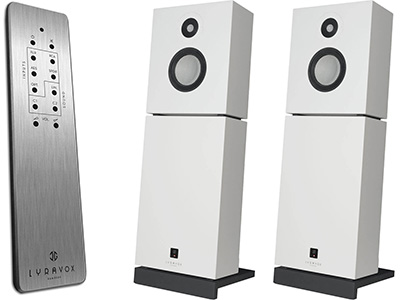 "I programmed three response presets. The first is for modern listening, the second for long sessions, the third is old school and for movies." When I asked Sinan what response parameters associate with each preset, "at the moment I can't share my values and what else I did inside the Hypex amp's FA252 eCore but I spent many hours tuning, measuring and listening. In general it's a combination of hi/low cut-off frequencies, delay times and extra filters at certain frequencies."

"When powering up, always turn the slave on first, then the master one minute later. The default start-up volume is mute for safety. No signal elicits a blinking green LED, signal lock goes solid green, sleep mode red. Solid green also blinks when you change volume. Changing the presets is either done manually on the back of the master speaker; or via the remote's F1, F2 and F3 buttons. I'm not happy with the stock Hypex plastic remote but it works well enough."

Unlike Hamburg's Lyravox with their swish custom RF remote for numerous nCore actives, Noble & Noble face the same eye-candy issue with their Nobilis Sonum 98 at €20K. Clients wanting fancier wands always have a more upscale universal learning remote. Consider this one or that. I have one of the former. It's ace.

Canvassing the web for two more nCore monitors, I found Meadowlark's 2-way Kite and the Heavenly Soundworks Five17 3-way with 8" horizontally opposed passive radiators. Either costs more than Sinan's direct-selling Swöxx which in this context takes up the high-value position. Where nCore power and DSP smarts are shared, it's interesting to see which drivers various designers deem most fit for purpose. In my fully arbitrary lineup, it's Seas for SWSpeakers, SB Acoustics for Meadowlark, Accuton and ScanSpeak for Lyravox. Heavenly don't specify their vendor/s. Regardless, it's a bit like wondering whether to drive Bridgestone, Pirelli or Michelin tyres. They're all good. Today is about premium Norwegian transducers voiced by a Viennese in DSP with Dutch electronics: global villaging in action and far better than equivalent pillaging. With a Schenker waybill number, I could track progress from Austria to Eire. Soon I'd know what Sinan's Swöxx meant, sonically. I just wouldn't be able to use it as an acronym for five key qualities. What audio aspects start with 'ö' and 'x', never mind two 'x'? On that score I was pickled purple. I wouldn't exactly be on my desktop I thought though at 31cm, the Swöxx would be precisely twice as wide as my Fram Audio Midi150 actives. I'd have to get a bit creative there. 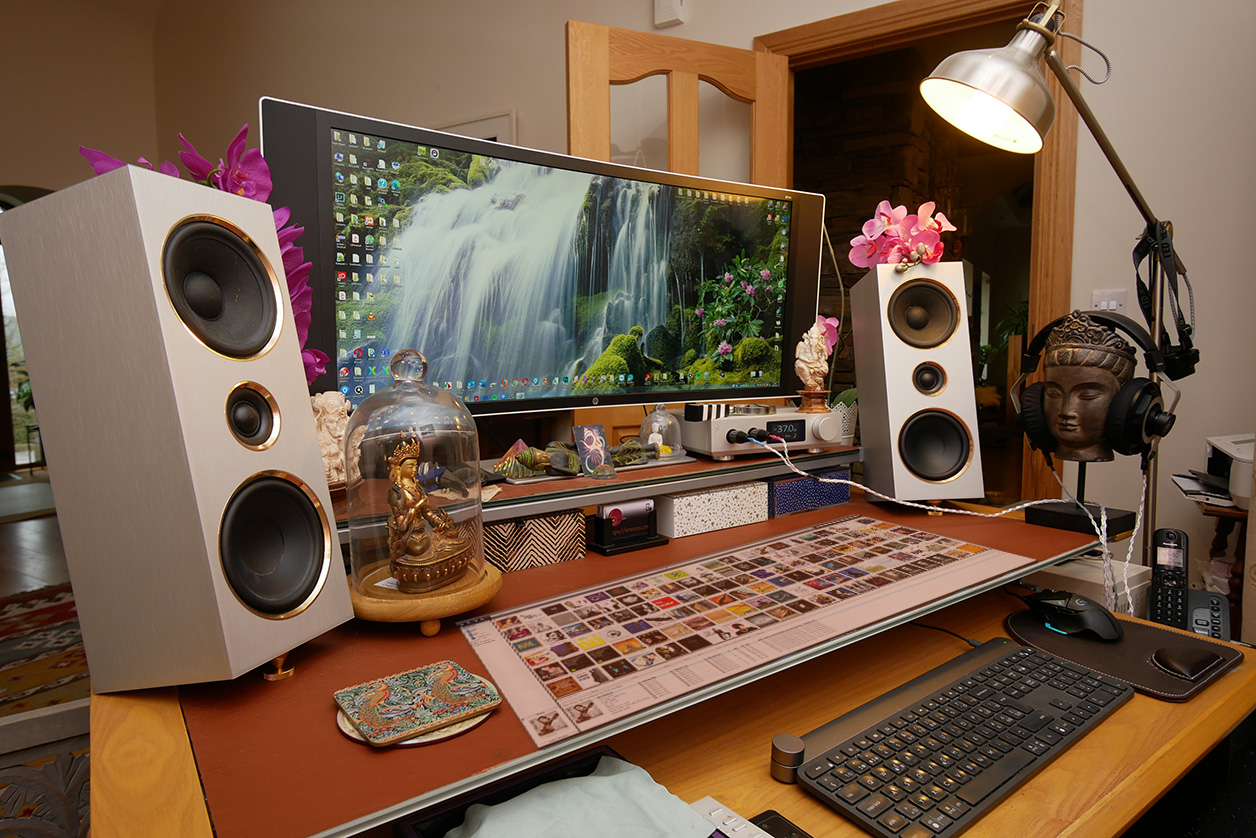 Once the two boxes—total weight 30kg—had entered Schenker's tracking system, it took them three days just to make it out of Salzburg. Presumably the lorry was waiting to be maximally loaded to make the most of its trip and related fuel costs. Three days later it had arrived in Ede/Holland and delivery on the central Irish west coast was still estimated for two days later. If the lorry took the Chunnel through the UK rather than hop onto a France⇒Eire ferry, I rather thought that post Brexit customs complications would make that estimate unrealistic. It all depended on the route and deliveries Schenker had booked. My truck made two more 3-day pit stops along the way but eventually did hit Dublin then Westport. We used to joke over the slow boat from China. This was the slow lorry from Salzburg. 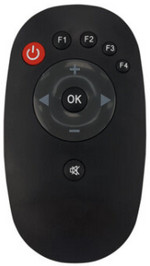 Whilst shipping ran its preset course, I asked Sinan about another preset. Could the Hypex default of a left master speaker reprogram? On both my desktop and main rig, the source sits on the right side. Running an AES/EBU digital link from there to the left speaker would be far longer. A SoundStage! review of the Five.17 said that the left default is set in stone. That seemed hard to believe with a software-based system. If true, I'd have to run two digital cables across the main room's carpet; one from right source to left speaker, another from left speaker back to the right. It'd be more not less visible cable salad when none of our passive speakers had ever required a signal cable to cross the throw rug between them. For invisible routing, I'd now need two digital cables of about 10 meters each.

The AES3 standard can run up to 150 meters of balanced signal from 2-7Vpp across its 110Ω termination. Popular digital AES3 input receivers accept up to 5V. That's 10 x higher than coax so a more robust signal. Domestic AES/EBU cable lengths are really no issue. My cable bin in the utility closet just had to contain something at the desired length. Time for some bin diving. I'd need one cable to get signal into the master speaker; another to forward the other channel's music data to the slave. That second cable is also needed for analog mode. Now it carries volume control instructions from master to slave. I was only concerned with digital mode. Why buy a DSP speaker for digital sources then use analog cables? It makes no sense. For vinyl and tape you'll have to of course. I just don't have any such sources. Digital is my middle name.

For sources, I could do an Audiobyte Hydra X+ battery-powered D/D converter between HP Z230 Win 7/64 workstation and Swöxx master. For locally hosted files on our iMac, I could do the equivalent Denafrips Gaia clock-sync'd to a Denafrips Terminator Plus; or for CD come right off an Avatar transport. Upstairs I had two Soundaware SD card transports with digital outputs. Now Sinan checked in. When he installed the Hypex configurator file to the nCore DSP of my samples, he'd made the right speaker the master. Halle-berry-luja. The upshot is obvious. Swöxx buyers should instruct the man about their preference. He can configure either the left or right channel as master. He just needs to know your preference. 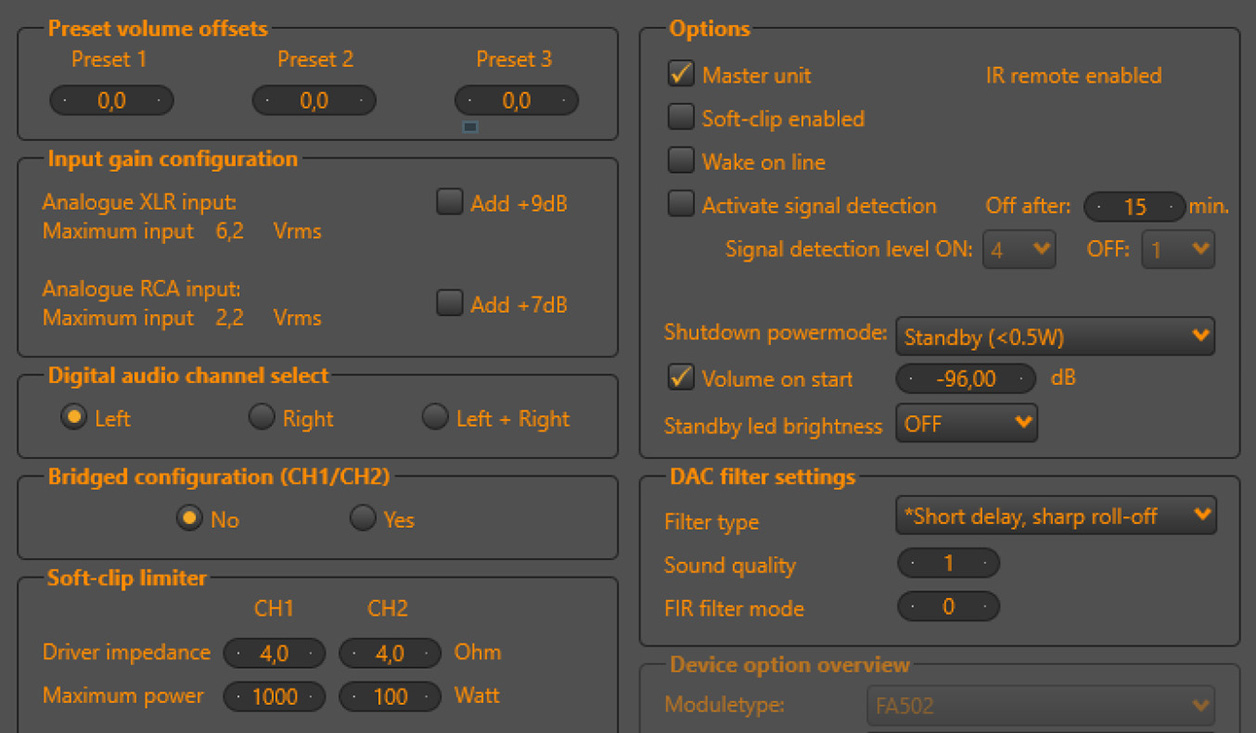 As long as you're happy to download then install the above file, it's even something you can quickly change after the fact when your layout needs alter. It's just mousing off the right box in software. Here is the complete 3.3MB PDF to learn about all the embedded DSP functionality of this Dutch OEM platform. "I currently live in Salzburg but started SWSpeakers in Sweden where I completed an engineering master's degree in acoustics and professionally developed, tested and tuned OEM audio systems especially for Volvo cars. I enjoy music and play the drums. This year in fact I'm participating at the Salzburger Festspiele in the Il trionfo del tempo e del disinganno operatic oratorio in a small role just for fun. As for the model name, in Germany they call a loudspeaker a box. When adding my initials SW, Swöxx was born."