Further on that score, with greater power comes greater responsibility. With the mechanical power unleashed by a pair of close-spaced 15-inch woofers comes potential fall-out. From my Carbide Audio review: Jolly G! Geezus gets called into perfectly mundane affairs far too often but really, I'd not expected benefits [of these footers under the sound|kaos sub – Ed.] this obvious. The biggest derived by advancing from pure horizontal roller-ball isolation to adding Jeffrey's vertical energy dissipation. Changing to his properly weight-rated viscoelastics made a rather smaller difference but still it registered. Bass cleaned up even more, my small knots of structural striations vanished and floor-borne involvement felt eradicated. On a good day I'd expected that, just not this much.

What came as a shock? The entire system's noise floor seemed to have fallen. Like any owner familiar with their rig, I know exactly what preamp volume generates my standard loudness. Suddenly I listened 2-3dB lower—my preamp shows actual figures—yet things felt just as loud. This was accompanied by a weirdly persistent sense of greater inter-note silence. That meant heightened contrast. On certain recordings, there was still more distance. Certain really low bass crystallized into even greater intelligibility and coincident with that now spookily even low register, I had more space between images.

For another atmospheric lounge groove with layers and potent reaches into the bassment, there's this Mercan Dede remix of Burak Malçok's "Gece Geçer". It's carefully mastered to practice apartheid between panned vocal samples, synths and solo ney. Any 'bass dust' stirred up by acoustic or mechanical coupling congeals this separation. Comparing standard loudspeakers to good headphones makes that point. Headphones don't suffer room issues. Then advancing to Raal's open-baffle floating ribbons without energy storage shows how the miniature rooms created by ear cups and cushions sealed around our ears still inject their own reflective mud. It's simply far less than typical speaker/room interactions. Now I had my closest Raal approximation in free space.

Fundamentally this fell into the category of we don't know what we don't know (until we do). If our eye sight softens gradually and doesn't hit alarming levels, we get used to it and function just fine. We can't know how much fine detail we've lost until we get up-to-date prescription glasses. In similar fashion, my ears got new glasses when the medium ViscoRing Carbide footers isolated the big Ripol sub. Common sense tells us that much will depend on the severity/power of the energy source aka sub; and the exact status of our floor support and its resonant behavior. Here we remember a Ripol's high directionality. It derives from a unique dispersion pattern which sacrifices room gain to reject its temporal blur. To counter the lost reflective gain, a Ripol compensates with larger cone surface and/or higher excursions. That generates stronger mechanical energies. 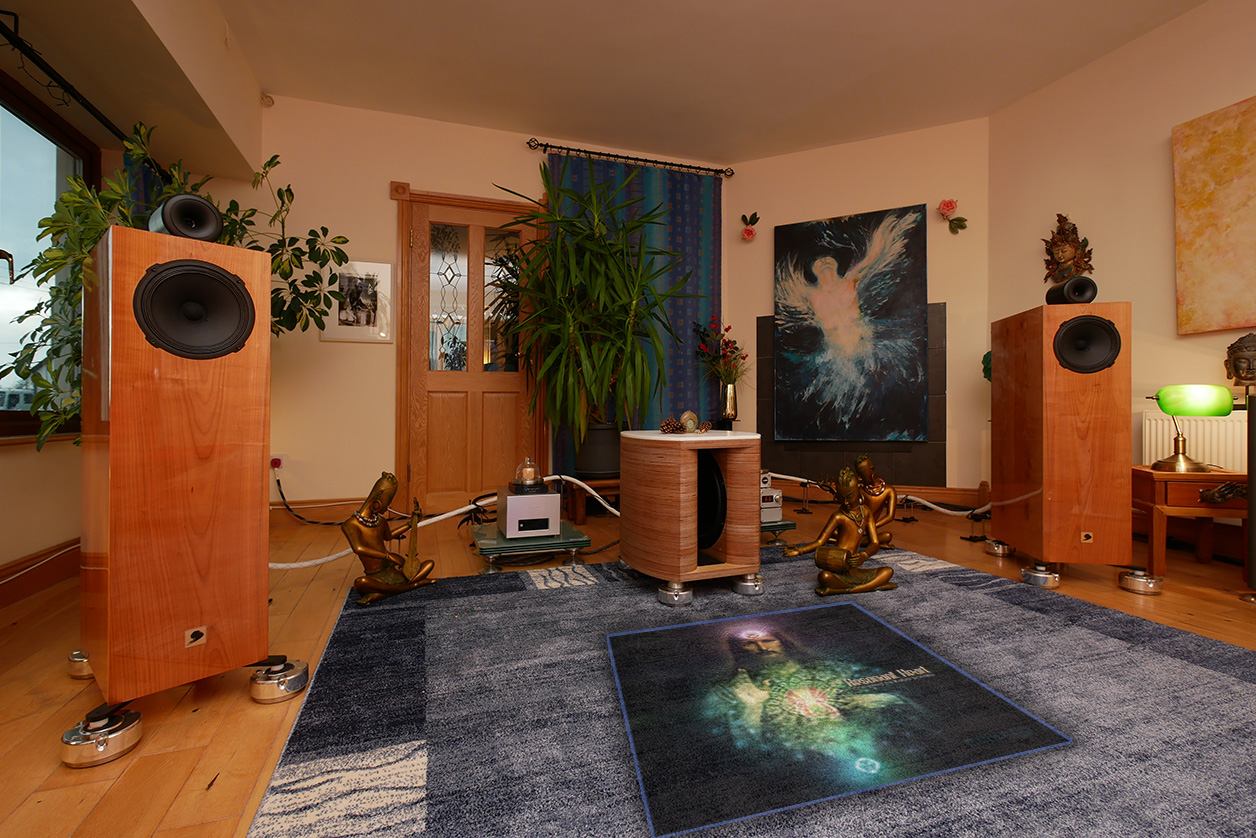 I thus can't know whether in the big scheme of such things, my experience was the normal, light or heavy version. I do know that in our room, I thought it neither light nor normal. Though these footers are polished on a wheel, their effect went well beyond a final sonic polish. Given its significance, I consider these footers—or something as effective—essential for our new dual 15-inch sub. Which ends my lengthy quote from the footer review. The photo above showed equivalent sets also beneath the speakers. As it turned out, those were perfectly redundant. Crossed out to be 6dB down at 80Hz, the speakers no longer factored in audible ways as secondary floor exciters. Subtracting the sub from the mechanical equation proved key and sufficient all by itself. 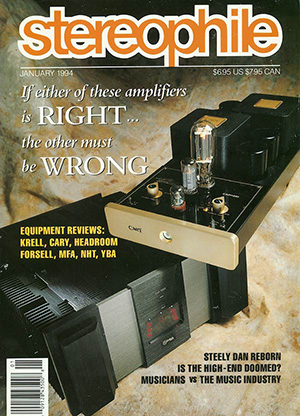 Obviously any delta of improvement will rely on SPL and a given floor's resonant reactivity. Still I consider it likely that you'd find these footers equally critical with this potent bass generator. What deserves its own comment are subjective bass dynamics. To me bass with line of sight produces the most visceral impact because initial LF shock wave meets skin and ears with no intermediary bounce. Seeing Martin's woofers edge-on only doesn't create the same transient confrontation.

Another element of dynamics is perceived pressure. Again the entire Ripol principle works very effectively against that gestalt. It replaces pugilistic sock-'em violence with a bee sting's precision. Potential shoppers must really understand and want this difference so expectations and delivery talk the same lingo. A milder though related offset exists between ubiquitous ported and rarer sealed bass. The latter's feel and time correctness are closer to Ripol bass though unaddressed room gain still causes typical overhang.

Just so, ported bass heads should feel even more displaced by Ripol than sealed bass. They'd call Ripol bass too dry and damped so insufficiently round and powerful. Arriving from ported bass really makes for the biggest departure. There's no common ground. These are two fundamentally clashing ideas on what's correct and/or desirable. Stereophile's January cover of 1994 famously made that point about a Cary 845 SET and transistorized Krell muscle amp.

Just like that example, experiencing dipole—or still better, Ripol—bass should be considered any curious listener's rite of passage by which they plot their personal path through the audiophile wilderness of many conflicting ideas and options. We can't know what we prefer if we don't know all our choices. And we may not know what we really want unless we meet it in person.

"What are you looking for?" is the quintessential salesman's hook.
"I'm not sure. I'll know it when I see it" is the often most honest reply. Replace 'see' with 'hear'. Voilà.

Needless to say, I've now made my bed. I'm snuggly tucked in. I can't go back to box bass. For me, this is about Milan Kundera not Philip Pullman. It's all Lightness of Being, not His Dark Materials. It's bass enlightenment both with more illumination so a very noticeable lifting of typical darkness; and with ponderousness transformed into cat-paw quickness that feels nearly weightless by contrast. For those wishing to shrink the DSUB 15's form factor, Martin is already at work on a 2×12" version. That will be likewise fitted with AudioTechnology woofers especially designed for dipole use. Here's another feature on room gain, its impact on the familiar tonal balance and how married to it some listeners will be.