The case against smart. Don't phone it in. If you're critical—not a point of honour but burden—even a made-to-go IEM like HifiMan's RE2000 still sounded clearly better off this DAP than on my smartphone. Granted, the offset wasn't enormous. A hifi-centric LG or equivalent might well close it. But where the M2's backgrounds were still like a pond without ripples, the Galaxy A5's had a sense of subliminal static. The Soundaware sounded more robust, open and assured. By contrast, the handy felt more constricted, narrower and energetically padded down. I'd liken this difference to how a premium widebander gushes. It scales completely out of the box and feels as direct as I imagine an illegal substance via needle might. Meanwhile even a very good conventional multi-way acts relatively contained and laboured by contrast and feels more distanced; a tad like a bystander reporting on the musical goings-on. That's not just about sound per se. It's how sounds (plural) behave. 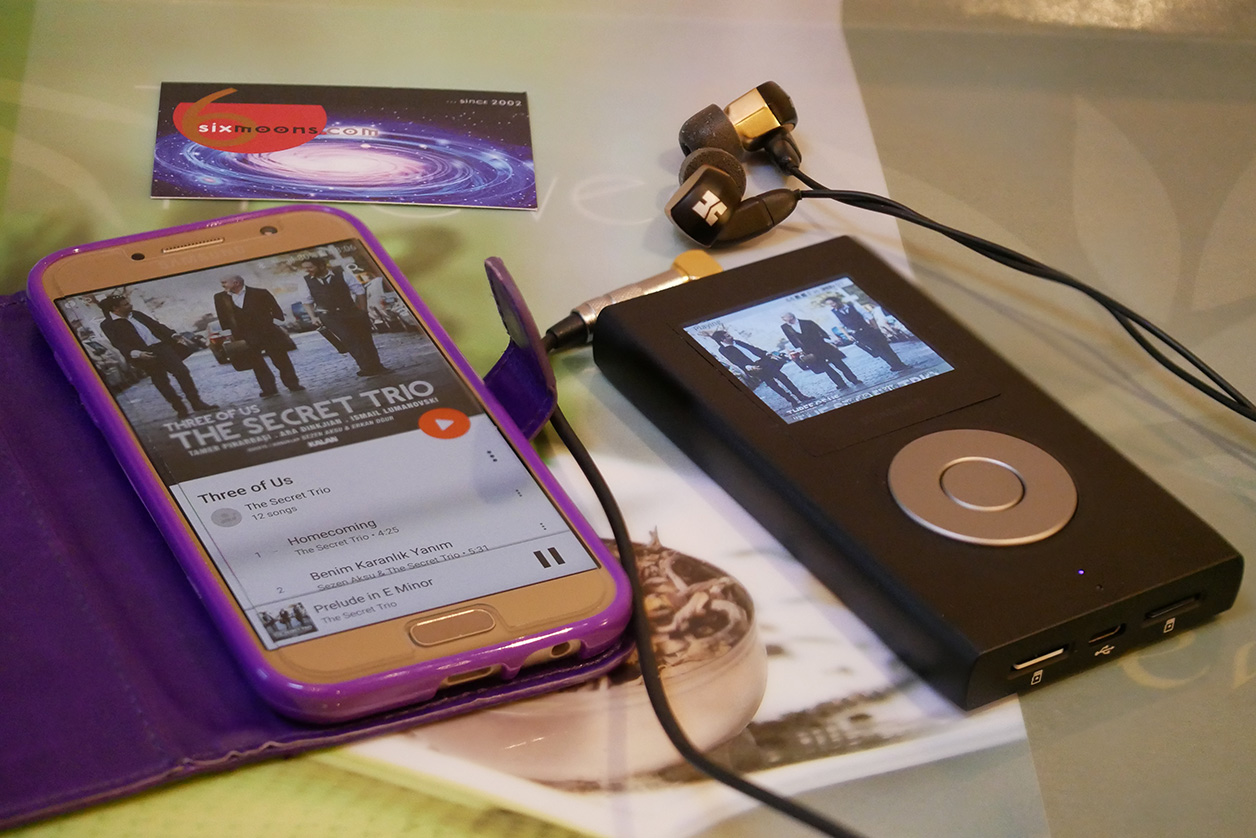 With our reference Audio Physic Codex and long-term Cube Audio Nenuphar loaners, I'm too familiar with that difference each time I alternate them to accommodate specific amplifiers. Obviously the convenience of using just one device to phone, photo, surf, email, youtube, gps, sms, app, movie and music could vastly outweigh today's additional €1'000 pack for the privilege of sonically dining out at a 2-star restaurant each time one hits 'play'. Perhaps a greasy spoon is more à propos. Plus, I used aiff/flac files of quality recordings, not Spotify Ogg Vorbis files made for free streaming. Purely on sonic grounds then, the black Soundaware showed the purple Samsung a clear set of heels. Whether enough punters would care is a very different question. Given the rise of sound-oriented smartphones, Berlin contributor John Darko calls DAP a dying breed. Given that the M2 Pro is brand-new for Q4 of 2018, someone forgot to tell Soundaware. All I know? This deck played far from dead; and even John's man on the street would have heard the difference. On that count, the M2 Pro justified its existence lucidly.

Reserve the high. Taking another shot at Lesley's high-resolution card, I now had smooth sailing except that each time the player switched between DSD/PCM or flac/wav, the first track in the new format would be preceded by a noise or two. This could sound similar to a record needle hitting a groove. I heard no other demerits except to say that I wish I gave a toss. The vast majority of this music repertoire leaves me cold. But Soundaware's marketing banks on you being made of this higher stuff. Flip the player on its back where it reads "full balanced & FPGA based portable hifi music player, 192kHz PCM & DSD128, made in China". And it really is all that and does all that. Because I'd had such premium results with the M2 Pro's pure line-out on the desktop, I did the unthinkable and used the same 3.5mm-to-2xRCA Zu leash in the big system. This followed the lead of Simon Kwangli Lee, formerly of April Music now Simon Audio Lab, who runs an Astell&Kern via such Y-cable into his main system. I'd have tried the M2's coaxial output but couldn't find my one and only cable fitted with the necessary mini jack. Trying a Toslink with 3.5mm tip in the off chance of a language barrier slip netted nothing. That port really is a coax. So analog out into Wyred4Sound's preamp it was, from there fully balanced into LinnenberG Liszt monos and Audio Physic Codex 4-way speakers. 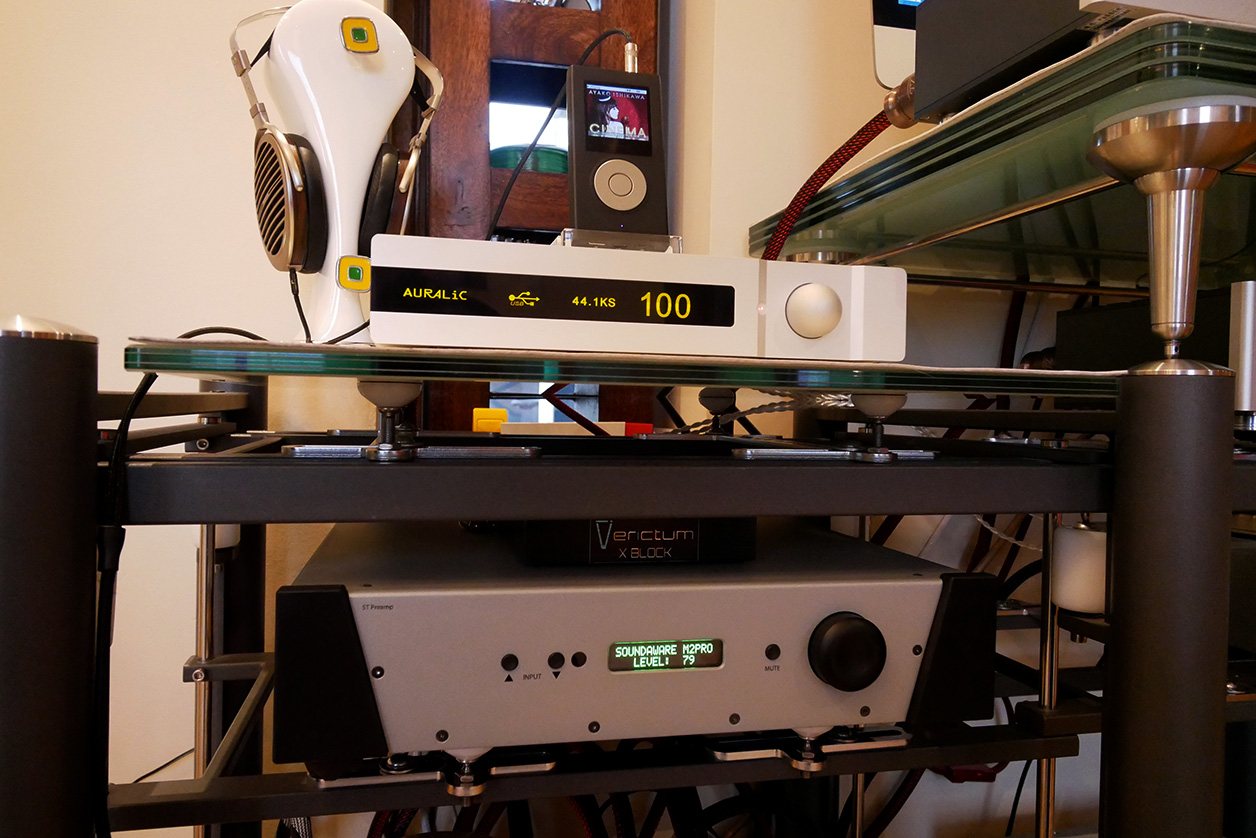 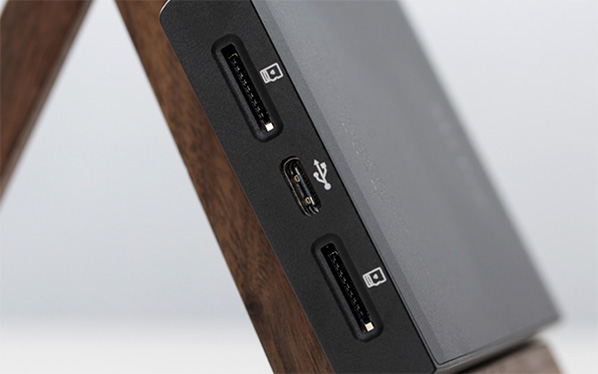 Unlike on the desktop where on gain the M2Pro's analog output competed with a digital USB signal then hit an active linestage, the big rig's usual DACs dispatch 4V or more balanced. Consequently, the M2 Pro without the optional 2xXLR extension box and custom balanced umbilical upped the numbers on the preamp's volume display by a factor of 4. Below 64, the Wyred preamp in fact behaves purely passive, hence without voltage gain. Sonically, this got surprisingly close to an original AURALiC Vega which I drafted for service as a ery recognizable quantity. At its time it had demanded €3'300.

Five years later, a premium portable at ? the ask could approach it with only a small gap in colour intensity where the Vega had always dominated. Because the 6m interconnects to the amps were driven by the preamp, the M2 Pro had no issue handling its short leash into it. In the context of a likely system whose owner would double-task this DAP for portable/stationary use, I'm confident you'd not want more. Premium dual-mono AKM 'Velvet Sound' chips driven mono I²S off a custom-coded FPGA followed by a balanced output stage powered by battery are a very winning recipe.

Pro. My only disappointment with the M2 was its scratch-prone acrylic screen. But a transparent protector easily covers that and should be included in production packaging. On all other counts, this black or red pocket rocket reconfirmed my impression that across their portfolio, this company recently kicked things up to ready distribution outside China.

So it came as little personal surprise that Alvin Chee of Vinshine Audio added Soundaware to his sterling Sino roster of Denafrips, Jay's Audio and Kinki Studio. The man has good ears and a keen eye for high value. Within that group, Soundaware still present as the most Chinese, from their website to experimenting with different colours for different models to the packaging and personal communications. It's what Westerners buying from Vinshine Audio bypass. Alvin knows his products inside out and resolves issues like my serial number snafu with Soundaware's A300 very fast.

If you're shopping for a well-made versatile DAP with native DSD and the full range of expected functionality in the €1'000 league, put the M2 Pro on your shortlist. Soundaware aren't as recognizable a name yet as Sony, Astell&Kern or even Questyle but they clearly aim to mix it up in the same league. Based on the sonic and usage evidence, they belong, too. Like all of their 'second-gen' gear I've tested and compared to their predecessors—M1 Pro, A300, D300Ref—the M2 Pro is all about modern sound: linear, low noise, high resolution, without any detectable voicing that might require special scenarios to embed as intended. 'Modern' thus also means universal not specialized appeal. I'd say the time has come for the global market to take note of this brand.