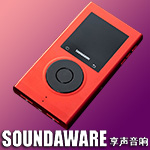 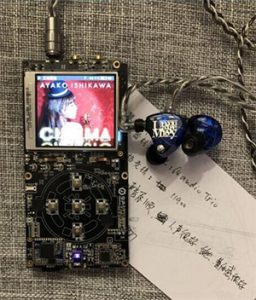 "The M2 Pro is a new flagship DAP designed mainly for IEM use. Its voicing is reminiscent of our M1pro but the overall quality is really on a level with the flagship MR1. Pricing will be ~€1'000. We will launch it at a press conference in Shanghai this Sunday."

That had been my Soundaware contact Lesley Liu. Her update hit me on July 31st. Having just reviewed her MR1/P1, A300 and D300Ref in three consecutive reviews, I'd not seen an additional new product coming down their pike. I needed to clean my rear-view mirror. I needed to aim it at Shanghai. Then I'd seen more than the nude prototype board at the Beijing Headphone Expo at left. Instead I would have also cased out the early black and blue units showgoers played with.

On the new model, there was more from Lesley. "Our new M2 Pro inherits the tonal style of the M1pro, then optimizes the platform which we already used so successfully on the MR1 and A300: twin DACs and an FPGA outputting isolated dual-mono I²S and DSD, the latter triggering the mono DACs into DSD processing."

The show display below demonstrates the size progression of Esther M1pro [far left] to M2 Pro [black and blue] and MR1. The MR1 aims at a crowd who regularly combine portable with stationary setups. They want one petite DLNA + WiFi + Bluetooth source to front their very serious big headphones, car and speaker systems. They press their DAPs into multi-tasking duties as streamer, fully balanced standalone USB DACs and/or SD/USB media renderers. Here the M2 Pro aims predominantly at regular mobile users. That means IEM, not big heavy over-ear headphones or dock duties. Of the in-ear headphone types, I had classy genre representatives by Campfire Audio, Final and HifiMan to conduct a meaningful review.

'Meaningful' also had to mean sussing out whether a standard smart phone wouldn't be sufficient to do all of the usual mobile tasks plus sound and do so in one device. Why carry around two if one does the job? My perfectly pedestrian not audiophile-approved 2017 Samsung Galaxy A5 would stand in for the type smart phone most the Irish we see out and about actually carry. Living on the rural west coast, the €1'000 iPhone types in Dublin aren't really our neighbors. But if that's you; and if you especially selected your posh handy based on its sterling sound specifications…then today's review—and any other review on digital audio players aka 2018's versions of the original 160GB iPod—isn't really for you. You've already phoned that in; hopefully loud and clear. 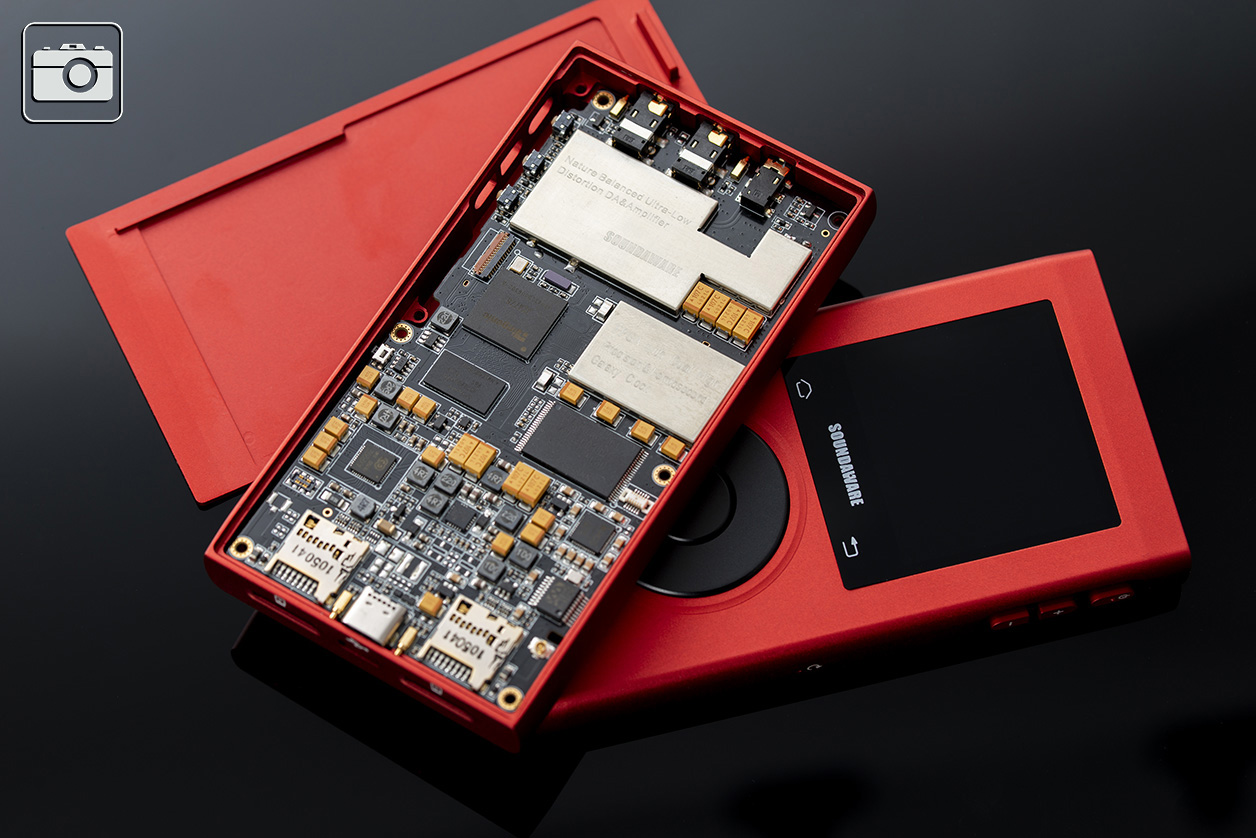 Reading Lesley's spec sheet, I learnt that the M2 Pro's casing is a CNC'd aluminium-alloy shell of 67 x 124.5 x 14.5mm dimensions and 175g mass. The display is a 400x360px 2.4" affair. Dual SD card slots supporting FAT32, Exfat and NTFS formatting can theoretically store up to 2 x 2TB once such cards are available. At present, 2 x 512GB should do most users. That's vastly more than the biggest old iPod. As a USB DAC, the M2 Pro has DSD128 support once a driver is installed. Apple's .alac and .aiff files are only supported up to 48kHz. Window's .wav and .flac equivalents get the full 32/192 corporate backing. Bluetooth is via APTX and CSR. Two selectable digital filters are sharp and slow roll-off. Claimed amplitude linearity is 20Hz-20kHz ±0.2dB. THD+N is 0.0006%. S/NR is 116dB A-weighted. Color choices go black or red. And that's all she—Lesley—said just then. The rest would be for my ears to figure out. All hands on deck. 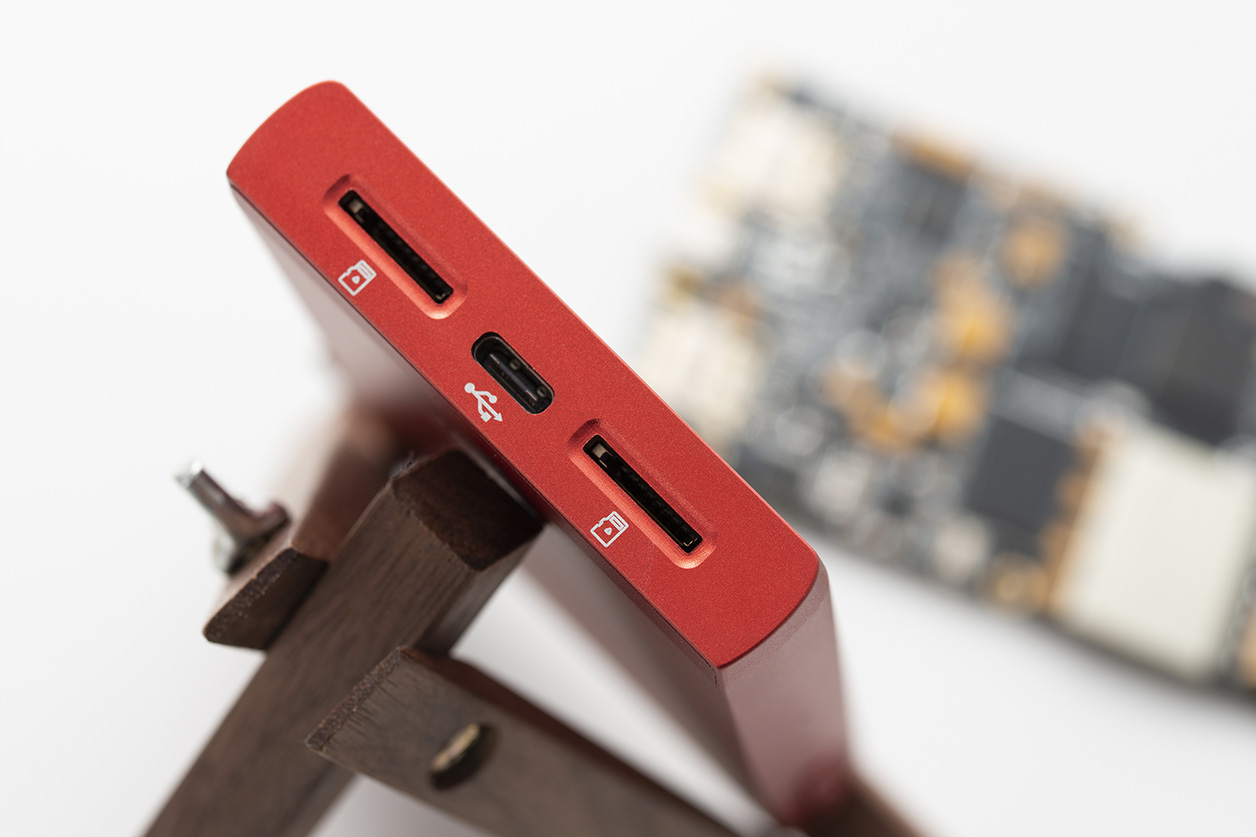 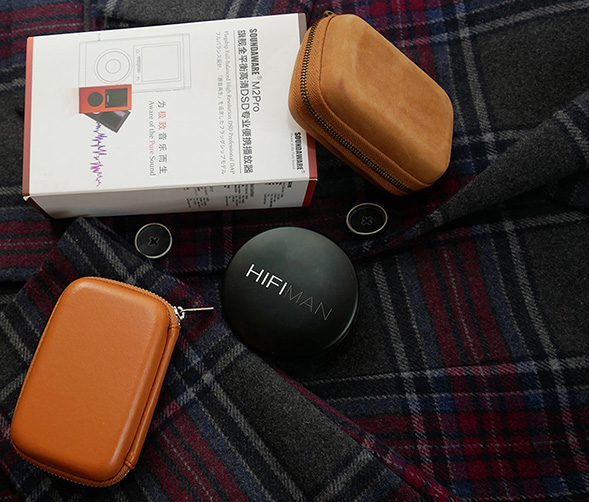 Obvious in-house comparators had to be Soundaware's earlier Esther M1 Pro; and Questyle's QP1R with its infernal wheel of death. That's my evil nickname derived from Apple's whirly icon when a program crashes. I use it for the QP1R's scroll wheel which was slick at first but has long since gone seriously wonky.

That fact alone has me much prefer Esther's hard buttons.

If you can't reliably access your files because a scroll wheel keeps misfiring, it doesn't matter one high-resolution byte how good a deck might make them sound when it finally does play your desired track. It doesn't matter how cool it looks. The basics aren't in place.

And while my pen is still bothered, what's up with the general fingerprint-mad touch-screen craze?

It has people install plastic screen protectors on their luxurious smart phones. But that only dumbs down their screen resolution and still must be cleaned.

I just don't get it. What am I missing?

I prefer traditional hard buttons which don't break. The M2 Pro has most of my name spelled right. It splits the bill between the hard click wheel's five concealed buttons and the soft  'home' and 'back' touch controls.

The earlier M1 Pro had turned even those two into physical buttons. In the photo, the two Campfire Audio IEMs in their zippered leather pouches and HifiMan's in their metal tin were obviously not included. They just snagged a photo op.

The €99 discounted pure-wool coat for loud British background colour came from Galway's TK Maxx; in case you needed to know that…