"With Syzygy, bass extension and power far exceed what you'd imagine by looking at its mid/woofer and cabinet. Developing this speaker, we did everything to allow the listener to move it as far from the walls as possible to minimize reflections from our omnidirectional driver. As a result of clever design, you can even place Syzygy in the middle of a room and still enjoy considerable bass. Of course it won't equal an 8" floorstander but does much more than is typical for its size. To be honest, we actually had to decrease our cabinet volume to not produce too much low bass. Another interesting topic are 3D imaging cues recreated in the listener's brain depending on time delays and the amount of reflected sound." 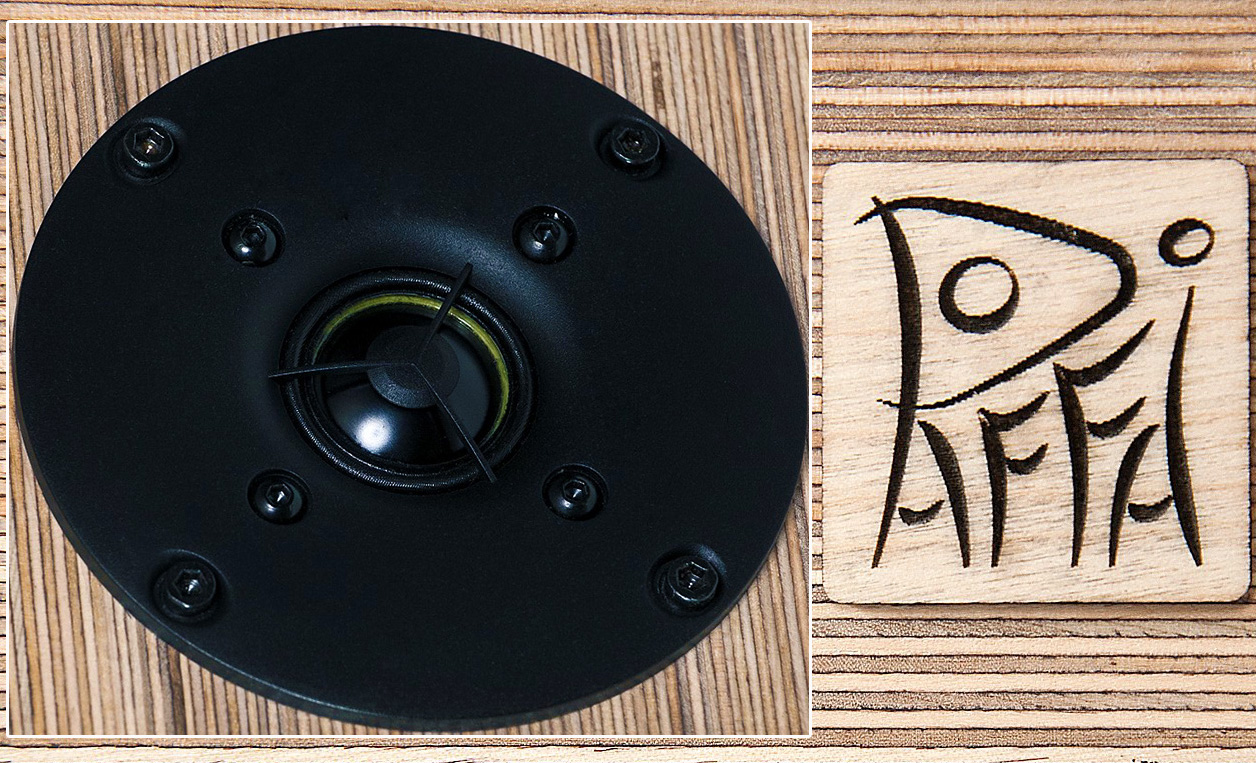 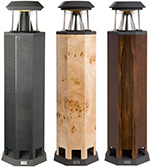 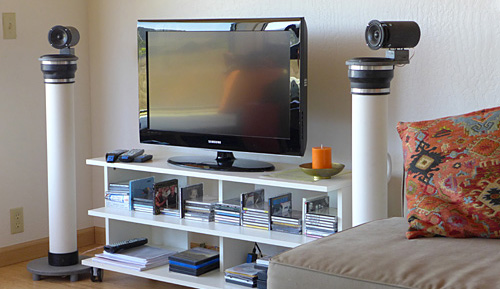 Reflections and omnis are obviously joined at the hip. As we move omnis farther from boundaries, reflective delays lengthen. Now the sound gets softer and more diffusive like it does in a concert hall's far rows. Our acoustics dominate more and more over distance. With our far smaller rooms, this effect is of course far diminished. Also, all speakers radiate omni-directionally into full space as their wavelengths begin to wrap around their cabinet. The infinite baffle to prevent that is mostly theoretical but in-wall speakers come close. The frequency at which half-space radiation transistions to full space also influences the baffle-step compensation which speaker designers make to counter the effect's acoustic gain. Full omnis like our German Physik HRS-120 at left simply extend that behavior across their entire bandwidth where Syzygy is an unusual hybrid. Like the Linkwitz LXmini at right, an omni mid/woofer without Duevel-style reflectors to shadow the ceiling works with a conventional direct-radiating tweeter. As boundaries recede around this speaker, its time-arrival differential between treble and mid/bass frequencies will increase. Now playing all our setup options should become an even more important fine-tuning ritual than it already is with regular speakers.

I was curious to hear just how much tuning leeway there'd be relative to audibility. Our rooms with double-high ceilings just had to sound more significantly different from those with standard ceilings than they usually do. Or so I thought. As a hifi consumer, personal experience always trumps theory. Still, it's educational to identify our expectations and assumptions beforehand. Now it's easier to see which ones bear out, which ones miss, then make the necessary mental adjustments to update our learning.

The phase/impedance plot I'd requested was accompanied by this email: "Our main goal was to provide as flat an impedance as possible to make Syzygy match the widest range of amplifiers. It was hard work to achieve." Above 200Hz the Ω curve is very flat indeed. Massive peaks at 22Hz/80Hz are far from but typical for ported alignments to have earned them a saddle response nick. ±30° phase shows concomitant deviations to mirror the Ω peaks but these are narrower than usual. For a ported design of small cubic volume, this was certainly a spotless driver's license to predict minimal insurance fees for partnering amplifiers. 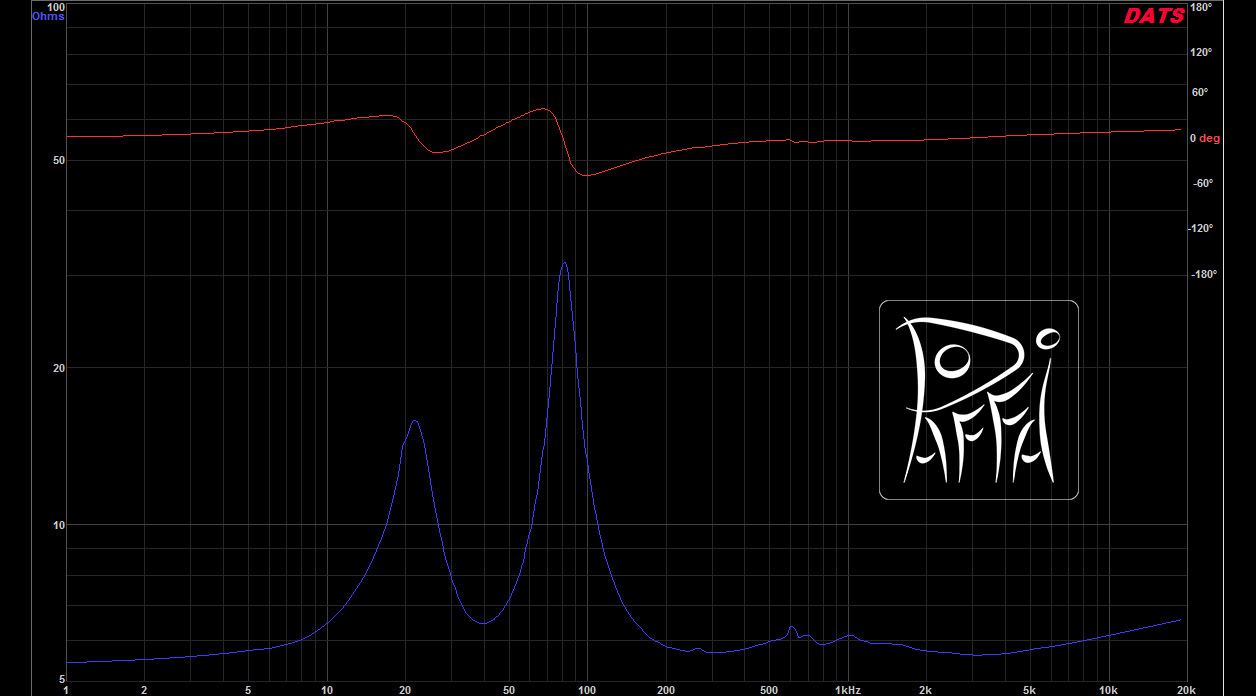 The first destination of my samples was this upstairs system to knock our resident Acelec Model One off their perches. Actually, those bolt firmly to dedicated stands. They would remove fully and replace with Track Audio stands. Those would give the Syzygy proper support at optimal height. Driving the Hungarians would be either our Korean Bakoon AMP-13R, a 25/50wpc into 8/4Ω class A/B integrated of extreme bandwidth and resolution; or a Pass Labs INT-25 in on review. 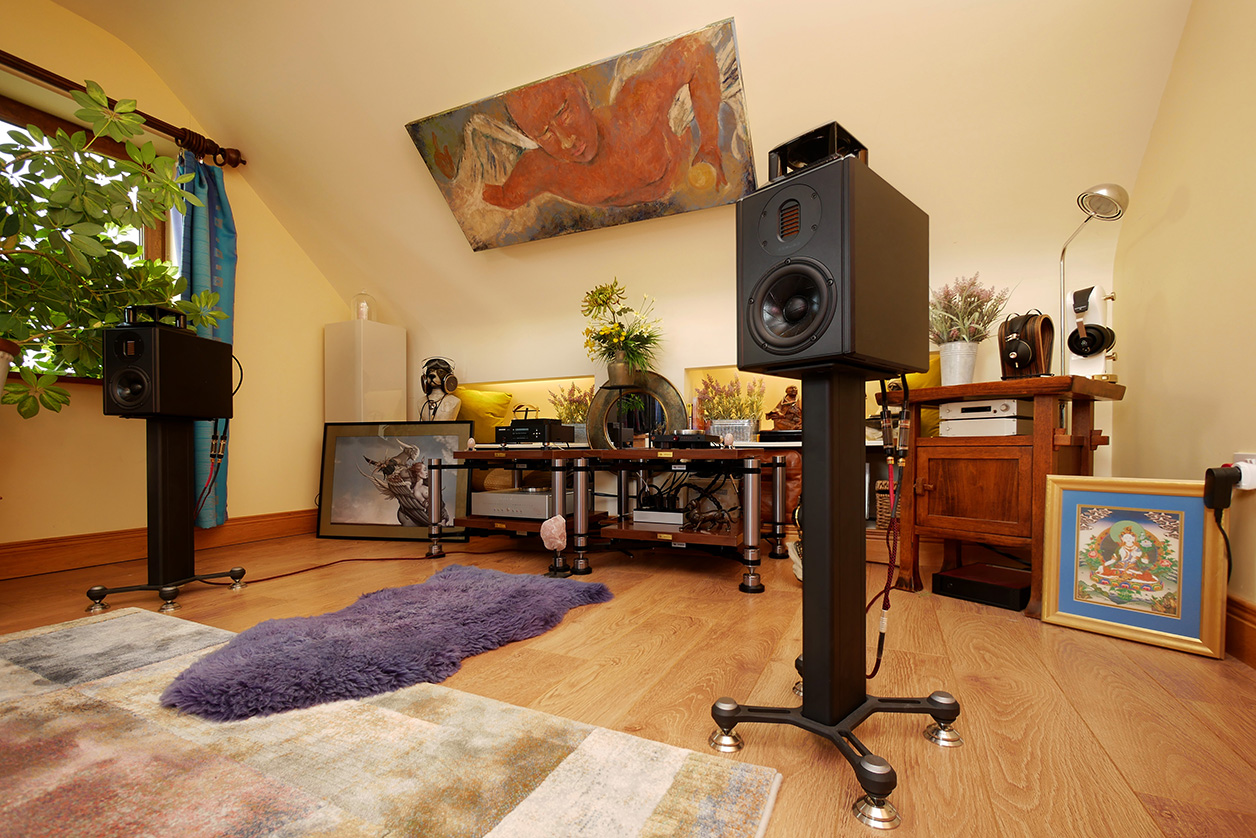 Here's the rest of the hardware floating atop Hifistay's Mytholoy Transform X-Frame rack from Korea: a Soundaware D100Pro SD transport from China; a Denafrips Terminator DAC also from China; and for power, a Furutech RTP-6 with two NCF Pure Line optimizers from Japan. The American Black Cat Cable speaker leads here terminate in LessLoss Firewall for Loudspeaker modules from Lithuania. With the newcomers from Hungary, it'd make for quite the polyglot ensemble though for us, Pacific Rim origins dominate. Syzygy took six days to travel along the 8-stop UPS route from Veces to Vienna, Nürnberg to Herne-Boernig, Stanford Le Hope to Tamworth, finally Dublin to Galway. The single package didn't weigh more than 19kg. When the tracker showed it on the white van out for delivery—magic words with non-EU shipments that clear customs but coming from within the EU pure routine—I set up our trusty Track Audio stands. I swapped in the bigger top plates, then rummaged through the hifi bin for eight matching small spike shoes to prevent scratching paint (Raffai include their own which I'd left in the box in the barn); and for BluTac just in case. A Pass Labs INT-25 was still in residence from its own review. I left that in for alternate power before the Bakoon would replace it. I was ready to meet Syzygy.