The baffle bits and all fasteners for them and the drivers and filter modules arrived first. Packaging was amateur hour at the OK Corral if you're a buyer who quickly trashes it afterwards. A reviewer who repacks sees plenty of hateful taped-up foam paper which tears faster than wallflowers blush; hand-cut insulation sheets for liners; and copious cardboard slices to fill up the oversized cardboard box. Ambush at the NoKay Corral. My takeaway was that these folks aren't big enough to invest in custom packaging. As long as everything arrives in good nick of course, most buyers won't think anything of it. Fair enough. 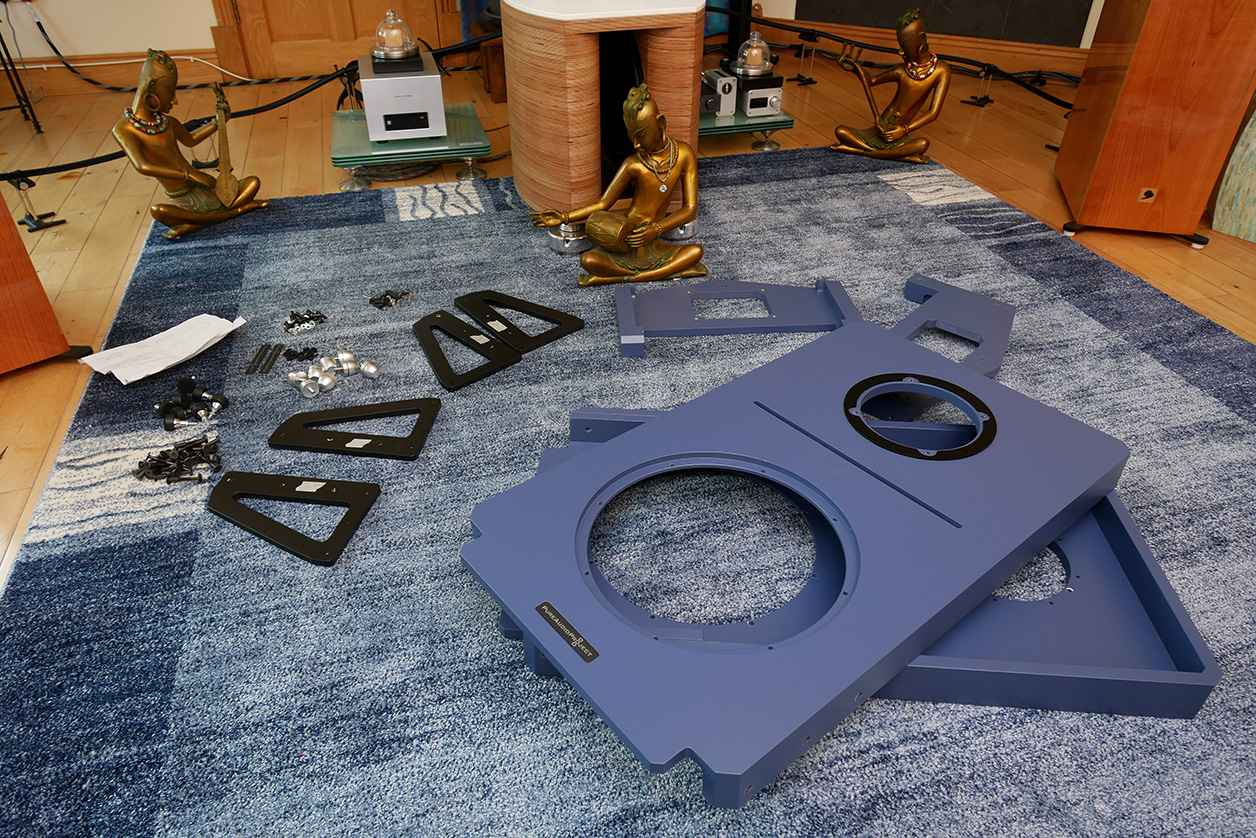 Getting baffled if still very openly took a total of 24 hex bolts with integral receivers. I counted perhaps fifteen leisurely Ikea minutes. The thin paint wants to strip when you tighten the bolts. The smart money will hold the outer hex steady and turn the inner where any small stripping won't show. The plinth has receivers for three or four footers. I used three so just one in the back. Out of six receivers, one embedded a bit crooked so the footer followed suit. 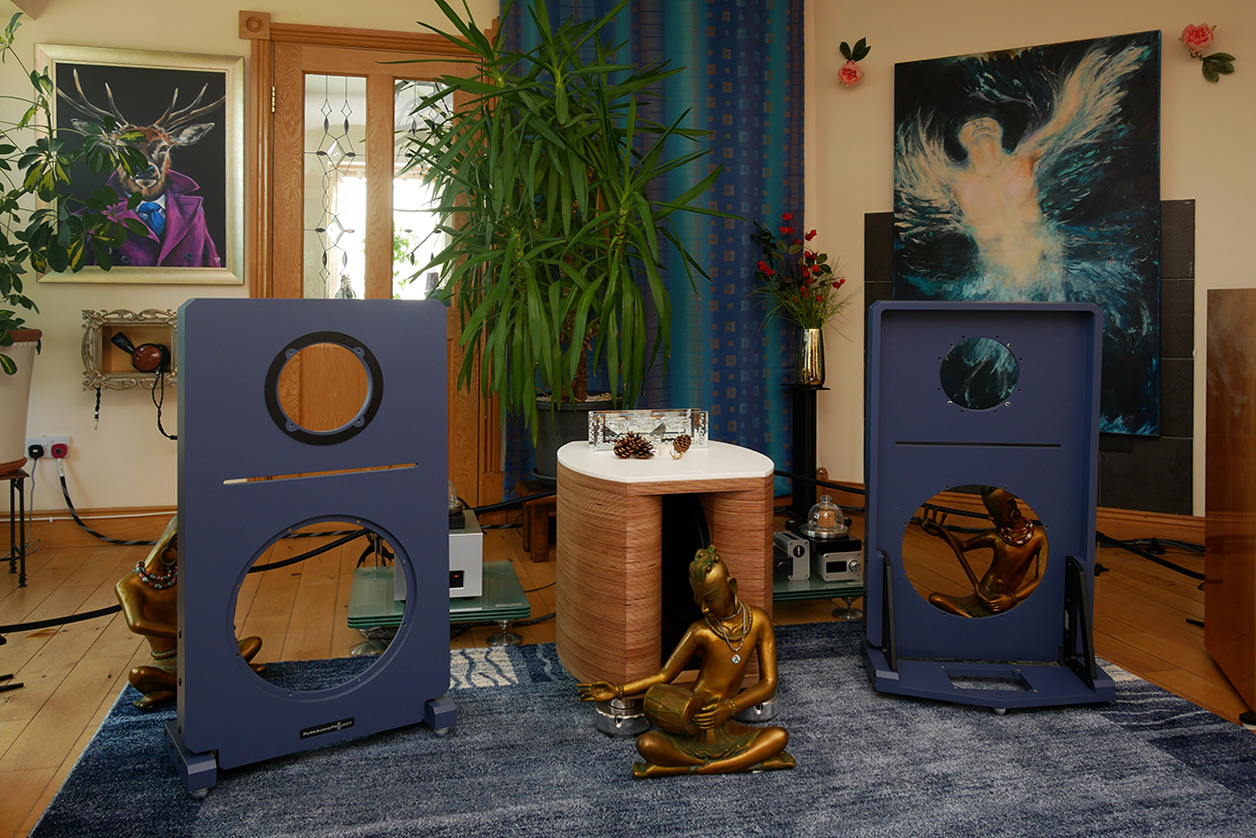 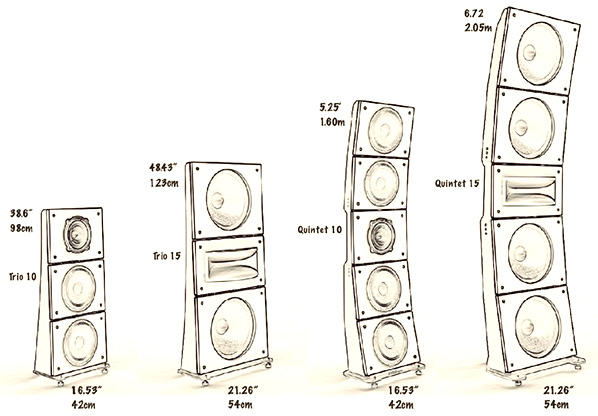 But blue-room sync was certainly on. German leather paint in royal blue had arrived the same day to finally convert a bright-red chair and match the present décor. Fussy, eh? Collector's alert. Where many box speakers take up too much room and weight to readily store when not in use, this compact flatso is happier stuff. Whilst the drivers add some weight, these are very easy shallow stowaways. They wink at aural polygamists who love multiple speakers on hand to keep life interesting and their ears on – well, their toes. Harem ready then? Yes, pasha.

As the drawing shows, the Trio 10 is the shorty of the line now joined by the Duet15 Prelude which also misses the meter by just a hair. Whilst Ze'ev could have clustered its drivers tighter to shave off more, you do want a beamy widebander at ear height (or otherwise need more baffle rake). It makes today's model about as stumpy as such a design can get. And yes, width is predicated by that 15-incher. If you want low open-baffle bass, you need lots of cone surface.

When I checked with Cynthia on drivers and xovers which Ze'ev said shipped first—he'd even provided a tracker—she promised to look into it. A week later she emailed a new tracker and apology for the delay. Under my buyer-by-proxy cap I spotted shade on Ze'ev's communications. Why tell me weeks prior that he shipped something when he hadn't? Cynthia marked it down as an internal error about believing a package collected when it hadn't. Okay. These were the days of delays after all.

The second box arrived extremely chewed up unfit for any return trip. Loose bits bounced around inside because the outer box was far too large for what it contained. Wrapped in black shrink emerged more baffle braces which I didn't need; and two badly scuffed green bases with filter boards still attached. The heavy inductors in each had broken their plastic screws and unwound a few turns bouncing about. One xover had the long tweeter lead wired to the woofer inductor. That would sound funky. Amongst green styro pellets and assorted filler were cardboard boxes with the Voxativ widebanders. No woofers. Given lack of packing care which felt like disrespect for anyone expected to send it all back in good nick, I nearly lost my appetite. Ze'ev now explained that this shipment hadn't actually come from them but an Instagram reviewer. He had no control over that individual's packing. His third party also had no proper packaging for the woofers. Those would still be sent separately. Okay then. I replaced the broken inductor screws, moved crossovers from green to blue bases, swapped leads on one, bolted widebanders to baffles and wired them up.

Once the woofers filled the lower holes, I'd be set. High-end hifi makes much of the trickle-down effect. This time I faced the trickle-in version. One belated benefit was now being offered virgin or played woofers. At 200 hours, the recommended woofer break-in would shut down my system for 25 days if played a constant eight hours/day. That equals 'closed for business' noise pollution. No wonder that I asked for the used drivers. I did wonder why I had to ask. If arriving at my first listening session felt rather more labored than usual, I now really did look forward to finally hearing these blue baffles. I was nearly there. All is well that ends well? 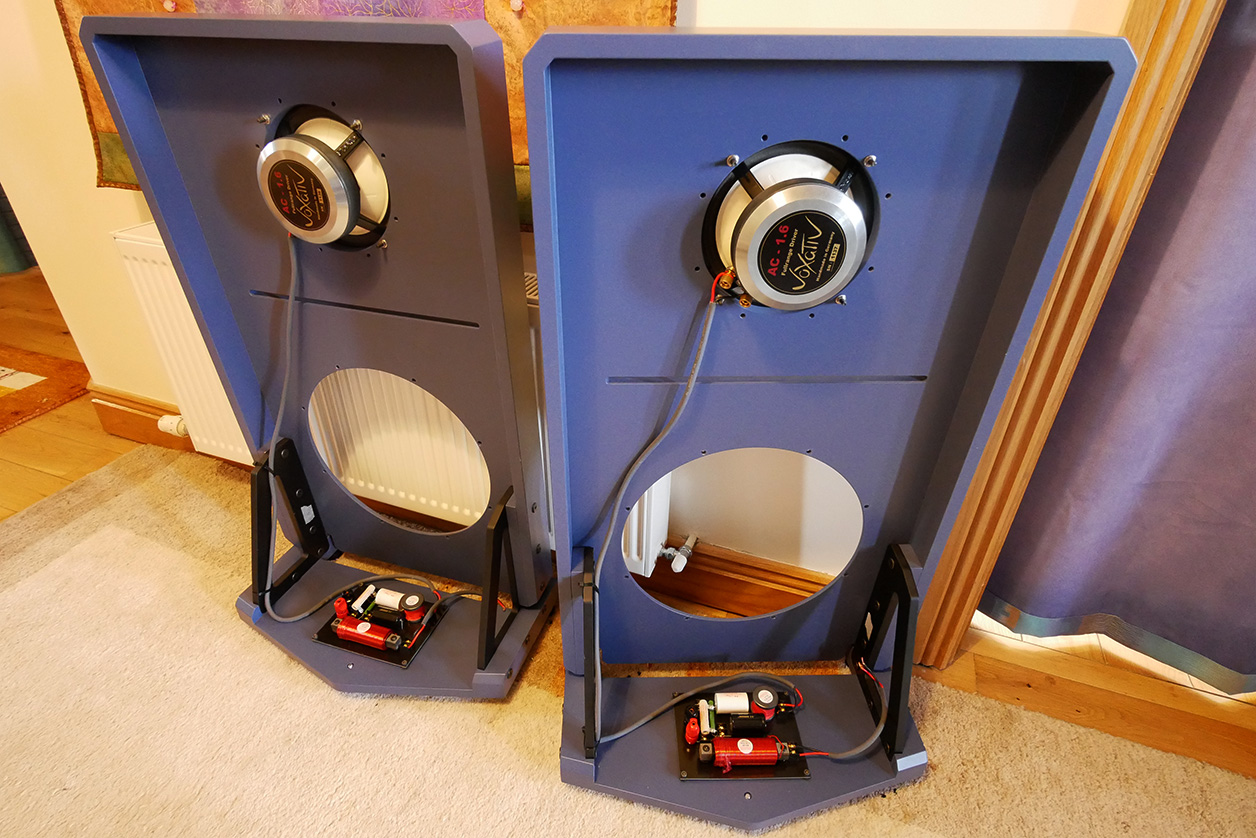 It most likely would have. I just didn't get there. Unhappy with this lead-up, Ze'ev no longer trusted that I could proceed to my listening notes unbiased by bad first impressions. So he cancelled the review. What I already wrote stops here. While it remains incomplete, it can still serve as a 'they exist' feature; a mini primer on open baffles; and how this one in particular goes together and looks. It's not everything. But it's something. That's how this cookie crumbled.