Brexit. C-19. Ukraine war. Everything interconnects. The hifi sector is no floating island to be isolated from complex run-on effects. Consider this: "Preliminarily I'm 'yes' with the review. There's just one issue. That model became a Covid victim. I had to suspend building it for lack of drivers. Their factory is hugely delayed due to the virus. I ordered my batch October 2021. That was to deliver by January 2022 by which time my stock had sold out. Now they will deliver 'about end of spring'. They're clearly not sure when, exactly. It's a huge problem with waiting customers. I can't tell them anything specific about when I can deliver."

A day prior I'd run an Enleum news update. Due to ongoing parts shortages and related price hikes, their popular AMP-23R saw a price adjustment and certain parts changes. To soften the blow, the company now packages their previously optional isolation footers standard and upgraded the plastic remote to a custom full-metal wand. Other firms that talk to me let on that they're busy redesigning circuit boards to adapt to parts changes where those originally spec'd became unobtainium or price prohibitive. My February obituary for Exogal showed how when vital parts cannot be replaced, a company may not be able to sit out the waiting game.

How us in the press used to help out was cover product whose makers needed visibility. We wrote reviews or an introductory industry feature. Currently much product can't be built to be back-ordered. That makes reviewing it counter-productive or outright impossible. Even exposé coverage does its makers no good when they must explain to inquiring parties that they can't actually make the cool product they just read about. Of course for consumers not being able to buy a particular luxury item or new toy is a champagne problem. For companies whose livelihood ties to its manufacture and sales, it cuts rather deeper. Buyers can help by extending patience to pending orders. As long as the manufacturer updates you regularly on status, don't cancel your order. That can be your form of life support. After all, while we have food on the table and a roof over our heads, we're already far luckier than many. 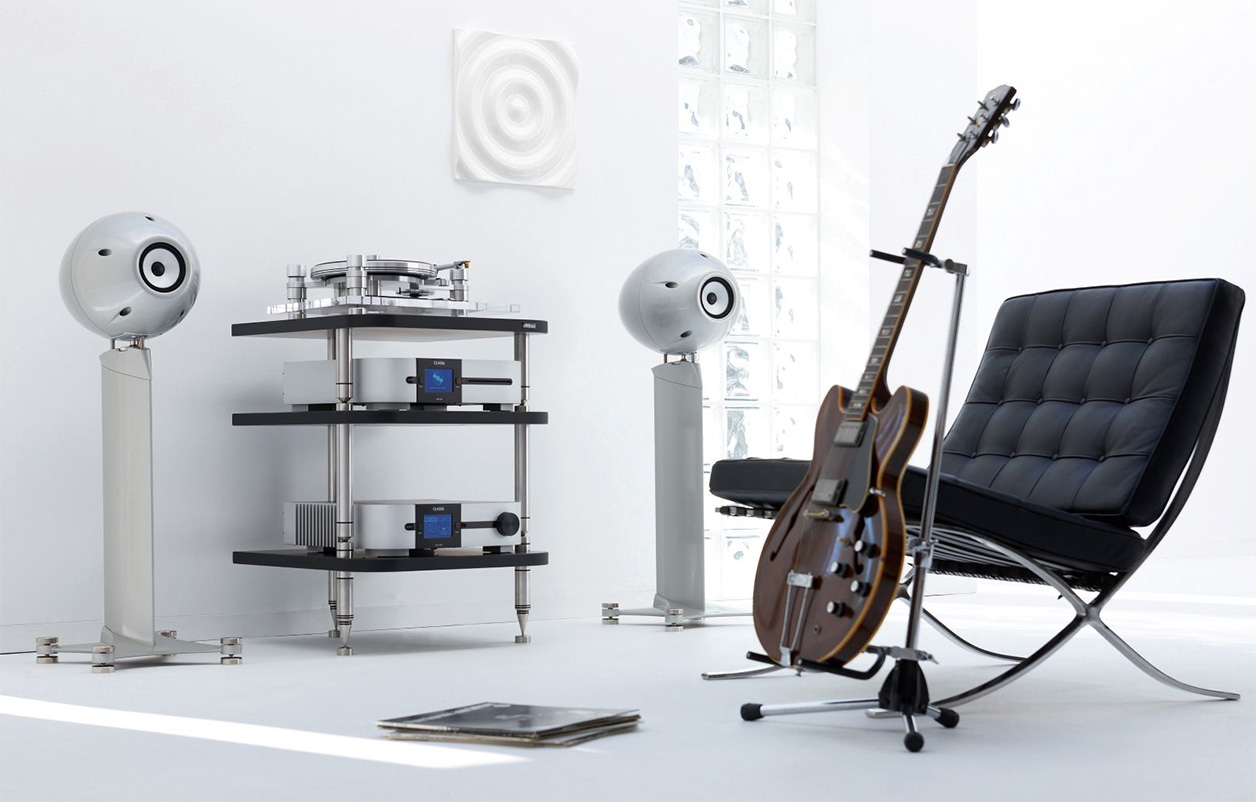 If this were April 1st not 4th, this super-advanced system, as shown, would need no power cords, interconnects or speaker cables.

No sooner had I hit the WordPress publish command on the above, this email arrived: "Eclipse's legendary TD712zMk2 flagship bows out. Eclipse have said goodbye to a much-loved and critically acclaimed flagship. Its early retirement comes sooner than expected due to delays in introducing its replacement caused by C19-related slowdowns and schedule disruptions." The obvious reason for announcing not new product but the end of an existing one came next: "Eclipse retailers have very limited TD712zMk2 availability with stock strictly on a first-come first-served basis." It's how lemons turn to lemonade. Of course turning a listening chair sideways, sympathetically resonating guitar right next to it, should still sour our thinking audiophile audience. But how to combine pretty promotional photography with setup realism remains a subject for another rainy day.

For this feature, the days of delays aren't limited to small companies or hifi. From CNN: "Tesla notified workers and suppliers that production at its Shanghai factory won't resume as hoped. It produces cars for the China market and is a crucial export hub. It's been halted since March 28 after the government launched a two-stage lockdown that started in areas east of the city's Huangpu River where the plant is located. Virtually all of Shanghai is currently under lockdown." That status was coincident with the HighEnd Munich 2022 show still being a go. Considering global events, I'd sit it out. The days of delays weren't over yet.