For more modern fare, the MQA version of "No Time to Die" by Billie Eilish is a rather nice variation on the traditional 007 mold, going for lush backup and subdued subtle vocals with catchy lyrics. If you enjoyed the prior theme by Adele, you'll find a lot to like here. For male vocals, I had some fun. "Six Cold Feet" of Let them Talk by Hugh Laurie is proof that there's indeed a musician in the crib. The entire album is solid Blues. with Laurie center stage on main vocals, guitar and tinkling the ivories, then backed by a star-studded roster including Dr. John, Irma Thomas and Tom Jones. It's raw, raunchy and satisfying.

For Jazz, I decided on a break from big bands and chose something more intimate. "Fourplay" from Fourplay is an example of soft jazz done as more foreground than background material. Accomplished musicians and quality engineering give the album the sparkle and variety to keep its cuts enticing and interesting. For classical I did bow to a chestnut. Decca's 1961 version of El Sombrero de tre picos conducted by Ernest Ansermet is an acknowledged reference for good reason. Excellent interpretation and musicianship are supported by clean engineering work that was top of the game. Expressive vocals, an orchestra punctuated by a wide panorama of castanets in a cavernous acoustic space are still ablaze with life 60 years later.

I almost didn't include "Tumbao Bonito" and "New Years Eve" from On the Waterfront by The Stimulators from YG Acoustics' Test CD 2 because I feared they wouldn't be accessible to most. Luckily Tidal have them and more spread over a vast collection of recordings. They met YG's requirements of high recording quality plus deliver on listenable material that was fun, sultry and incredibly infectious so it made my list as well. The Stimulators are a German band that combines notes of Latin, Blues, Ska, Jazz, Reggae and Rock to stir up a unique musical blend. With my catalogue of music assembled, I had accumulated a little bounce in my stride and it was time for the listening notes. 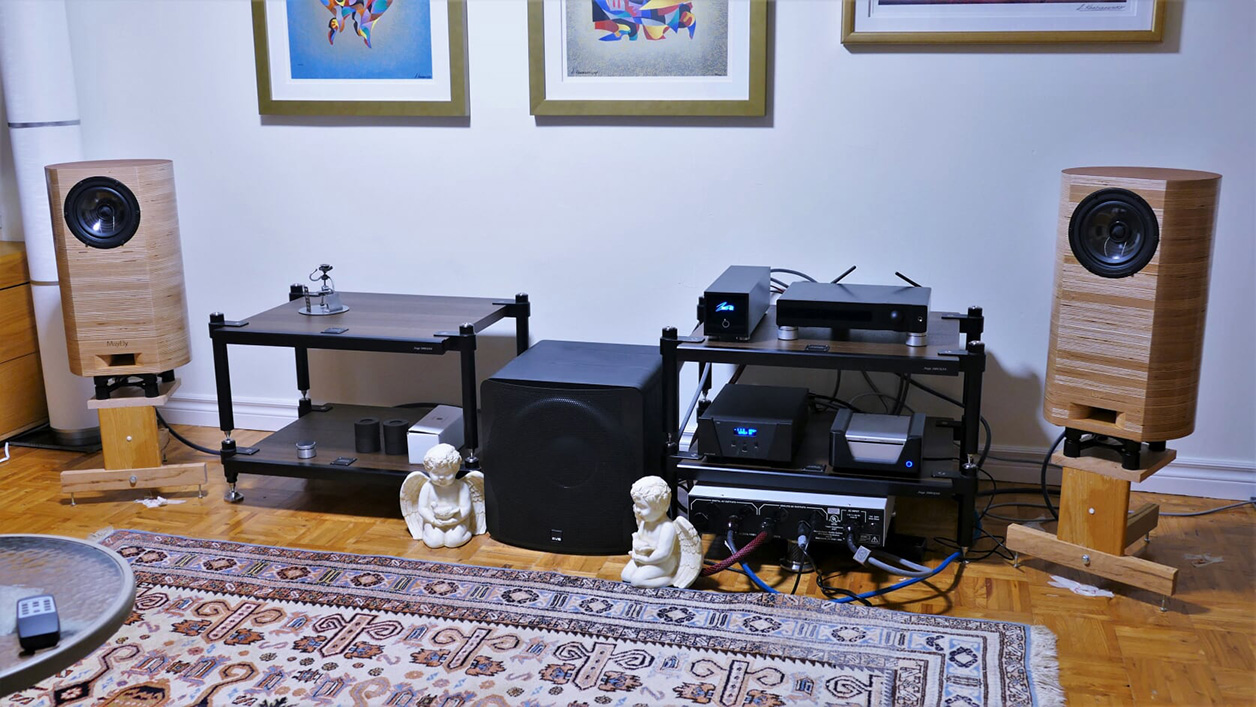 Though not the last word in sex appeal, my DIY stands for the occasion achieved just the right height.

Overall tonal balance on the MayFly was quite neutral, playing neither frequency favorites nor exhibiting glaring eccentricities which promises prospective purchasers a wide variety of successful system pairings. It emulated the tradition of classic BBC monitors by trading some extension at the extremes for a more cohesive result. High frequencies extended flat to about 15kHz and were extremely smooth and devoid of resonance, drawing attention to performances rather than tweeters yet exhibiting high resolution. That refinement extended seamlessly down into the midrange, lower midrange and upper bass. The skyline diffuser dealt effectively with internal resonances and allowed the wideband coherence of the coax to unfold in remarkably uncolored vocals and instruments, allowing me to create clean, airy, transparent playback with the Wyred combination and a dense, dimensionally vivid presentation with the Auralic/SOtM. Both were equally satisfying yet quite different. Essentially the speakers seemed honest to their input.