Digital negotiations: the counter offer. By now you wonder. Why any ink on the Soundaware when this review was LampizatOr's? Because vis-à-vis the iMac direct, the SuperKomputer did the same things to make quoting myself the lazy man's out. It removed the effects of computer noise on the music signal. As a result, that signal exhibited none of the grit, grain and glare in the general treble; nor that faux sizzle or edge inside the higher harmonics of transients. As a second consequence of lowered noise, there emerged more micro detail. This enhanced the sense of virtually seeing specific instrumental or vocal executions; and improving front-to-back layering or the precise sorting of dense imagery. Then the LampizatOr veered off script into a different voicing. Given the firm's fame with direct-heated triode and DSD DACs, this seemed both deliberate and predictable. Exactly how it might have been accomplished in the purely digital domain should have the bits-are-bits brigade at a loss. Unlike speakers with their pronounced amplitude/phase deviations to give them recognizable personalities, a bit-perfect digital output would seem to leave no room for voicing. That does read like a sensible argument, doesn't it? But it fails miserably at accounting for the actual experience of such differences. 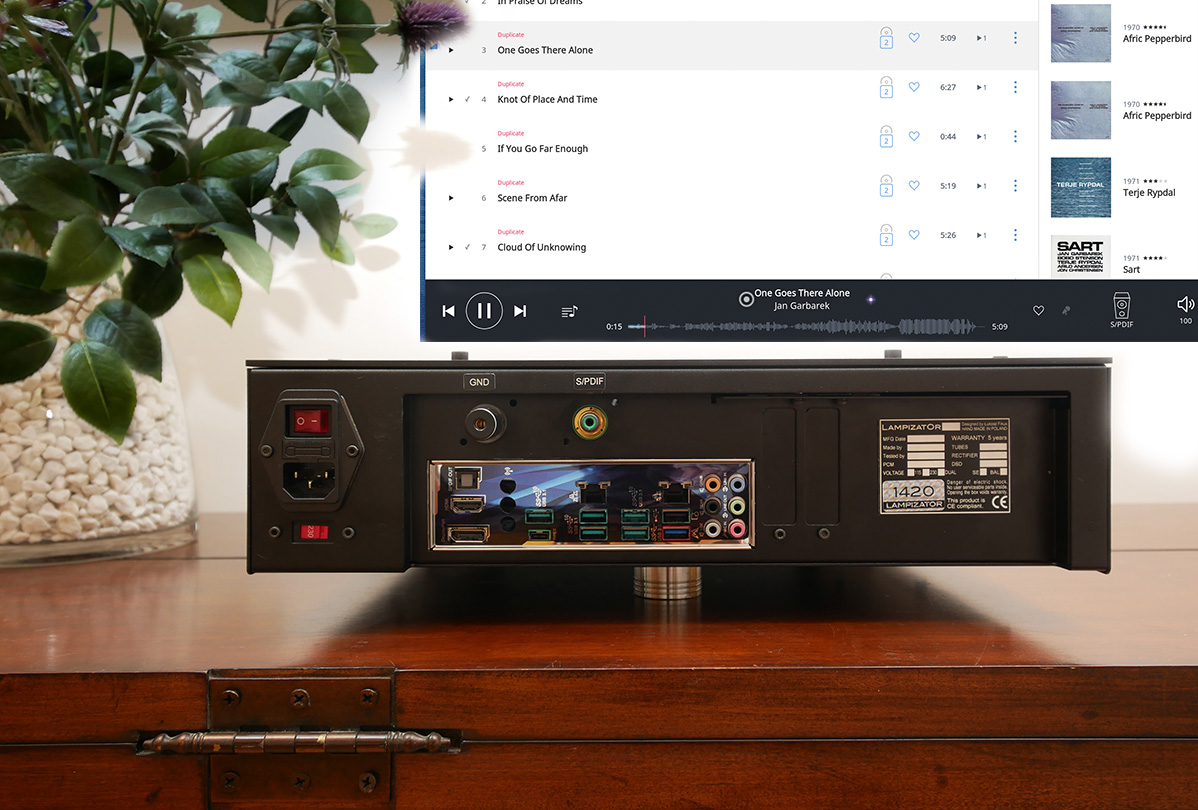 In this instance, the SuperKomputer sounded weightier, gentler, warmer and sweeter. Purely subjectively, it also presented as a tad more leisurely. That relates to rhythmic perspicacity. Here this deck felt more relaxed or loose; more flow than beat driven. Having reviewed Nagra's HD DAC with first-gen firmware which resamples all PCM to DSD like Meitner, Koch and PS Audio do; and having done enough format comparisons to have both opinion and preference… LampizatOr's voicing struck me as quintessential DSD. It meant being darker, warmer, heavier and a tad bloomier. Here the layering simply wasn't superior to PCM in general or the PCM-flavoured iMac/D300Ref combo in particular. Yet without any actual DSD files or Roon or HQPlayer-based PCM/DSD resampling—our Aqua DAC's processing of all DSD as PCM would have made that a redundant exercise—the sonic gestalt still spelled DSD. Again, that was most interesting when the causes for it occurred prior to D/A conversion without format conversion. It was purely a function of a changed digital transport. But then fans of C.E.C. belt-drive CD transport report for them similar things over the Philips, Esoteric and Luxman mechanics.

It's probably more instructive to not tie this voicing exclusively to DSD. Rather, published evidence suggests that ?ukasz Fikus' sonic priorities are best served by direct-heated triodes and open-baffle speakers. That preference first found common ground with chip-less DSD conversion. For PCM, he later embraced Soekris-based R2R. Now his 2018 flagship DAC runs on undisclosed ΔΣ (possibly AKM) silicon for both formats. Our Polish contributor Dawid Grzyb compared that to his personal Golden Gate DAC. He reported increased resolution, speed and separation, hence a lighter take on the signature thicker/warmer LampizatOr voicing. By perhaps a similar degree, I didn't hear the SuperKomputer as any full-on immersion into DHT or DSD aka LampizatOr's well-covered early house sound. I heard it as a distillation thereof. It was recognizable by ticking off most the familiar aspects but went lighter by degree and execution. Perhaps a more mature man had dialed back some youthful exuberance/excess without abandoning his core credo. It's why the SuperKomputer's fingerprint was transparent enough to not obscure different production values. It's when all our music begins to sound suspiciously alike regardless of our fondness for its general flavour—like curry takeout every day of the week—that we suffer a dominant colouration. Now imagine a properly varied cuisine that's served up under stable lights, be those neon, halogen, LEDs or old-timey filaments, just not candles. Differences from recording to recording transmit clearly. They simply carry an embedded 'lumen' imprint. The hardware's lighting fuses with the recorded imagery.

That's what I heard with the SuperKomputer. Its lighting was more yellowish/golden or amber in hue than our system's whiter more Platinum tint. Also, I own less than 10 DSD albums. I'm used to and conditioned by PCM. It's why I prefer its flavour and hear it as the familiar, the more honest and less 'coloured', not as the leaner or drier which those conditioned by DSD might hear. And contributors Marja & Henk who also do vinyl nowadays favour the resampling of PCM to hi-rate DSD in HQPlayer before outputting it to a matching DAC with a simple low-pass filter. It's a matter of taste, even allowing that taste to develop and change over time. 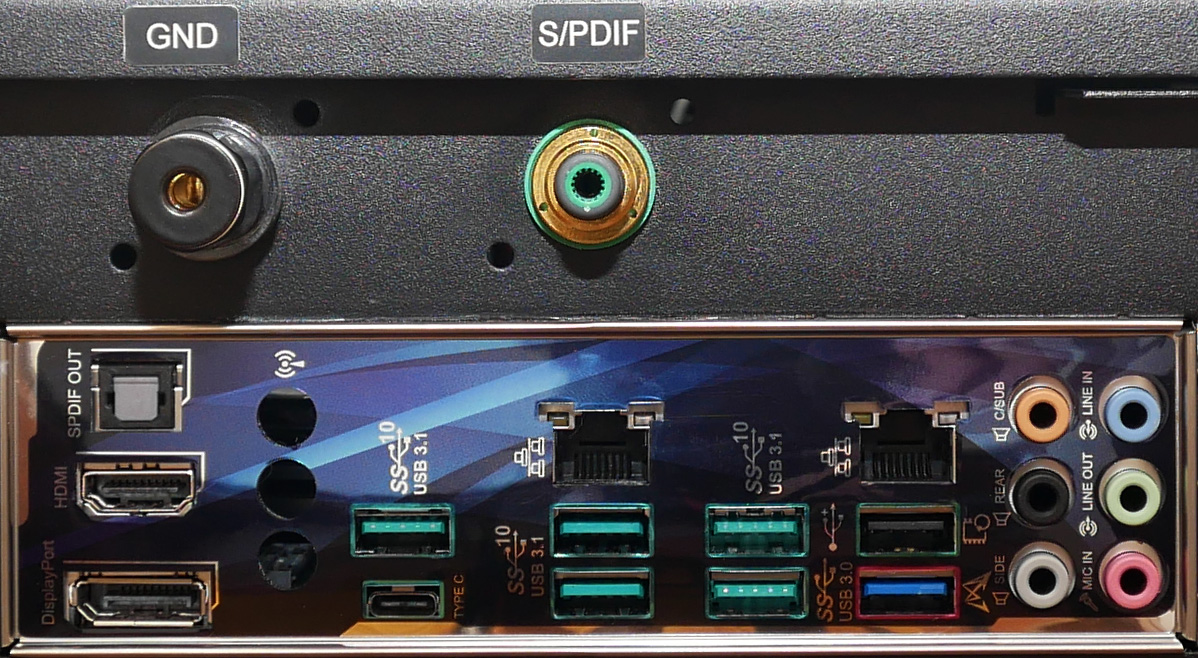 Antoni Bagan's SuperKomputer for LampizatOr clearly demonstrated how digital servers without built-in D/A conversion don't just differ in functionality like various app platforms, GUI skins and such; nor just in various degrees of resolution or detail. They can even express different voicings. Given that those don't operate in the amplitude/phase domains, they are more faint than tube/transistor differences can be. As such they're very far removed from how significant speaker/room interactions are by default. Nonetheless, they can assert themselves to become decision makers on what to live with. For the SuperKomputer, slick industrial design, luxo fit'n'finish and tidy compactness aren't on that menu. What is on the menu are DSD-reminiscent sonics from plain 16.bit/44.1kHz PCM aka CD files. What is on the menu are significant noise-effect reductions which PCfi suffers by contrast unless it was seriously complexified with outboard black boxes.

The one that got away? With the D300Ref having ended my years-under-work iMac improvement 'project' just a few weeks prior, I no longer was in the market. Even if I still were, the SuperKomputer's reliance on a live network connection wouldn't be personally attractive. I'm not of the always-on generation. I seriously dislike any unnecessary open windows to Big Brother's 24/7 surveillance. Must I be exposed to it even whilst listening to music? In the big system, I listen nearly exclusively to locally hosted music. Those are files I own and paid for. Here Roon's featurization is no real asset given that my iTunes library is custom tagged. All of it puts me in the distinct minority. Finally, I favour the 'sound' of PCM to DSD and for this type coin, would also want a smarter industrial design in a smaller package. That said, ?ukasz Fikus at the Munich show wasn't exaggerating when he declared their SuperKomputer a completely different thing from a basic iMac. It not only plays in a sonically higher league. It actually introduces an alternate voicing I've not previously encountered with this breed. That takes no special ears to hear. I view it as a potent possibly the decider for any fan of the sonic Direct Stream gestalt; for a direct-heated triode lover; for a vinyl-type customer. They all expect a familiar/similar flavour from their streaming digital even if the actual dosage will by necessity have to be smaller. But in a nutshell, that's the SuperKomputer…