By not adhering to the early Audeze planarmagnetic aesthetic, Wodan implicitly parked itself closer to HifiMan's planar flagship, thus also its less resolved HE-1000 mate. Before battling €6K of actual Susvara in the big downstairs rig—patently cough on coin but we roll with the available punches—I moved our Russian upstairs. Here it went tête à tête with Final's D8000 for orthos; their Sonoroux X for classic dynamics. The latter erase twice the bank balance. The former are roughly equivalent to Kennerton's. In the driver's seat was our very best headamp, Bakoon's 25wpc AMP-13R. That power rating is for 8Ω. It doubles into 4Ω to reflect standard speaker conventions. One expects it to halve by the same metric in the opposite direction – roughly 5wpc into Wodan's 38Ω. On my ears and with the circuit set to low gain, most tracks sat below 20 on its 50-max volume calibration; far below what Susvara requires here. And this is no classic attenuator. This amp sets its amplification factor with a resistor at the output of its current-mode gain stage. Enter switched resistors to change that value. Presto, this amp's gain always sets directly. It doesn't first produce full gain, then burns off half or more resistively. It's a no-loss volume solution. Whilst here my front end of €699 Soundaware A1X SD/DAC was indeed very similar to the desktop, the amp part was excessively more ambitious. It was like Kenneth Brannagh's 65mm camera on his Murder on the Orient Express movie is to standard 35mm film stock. 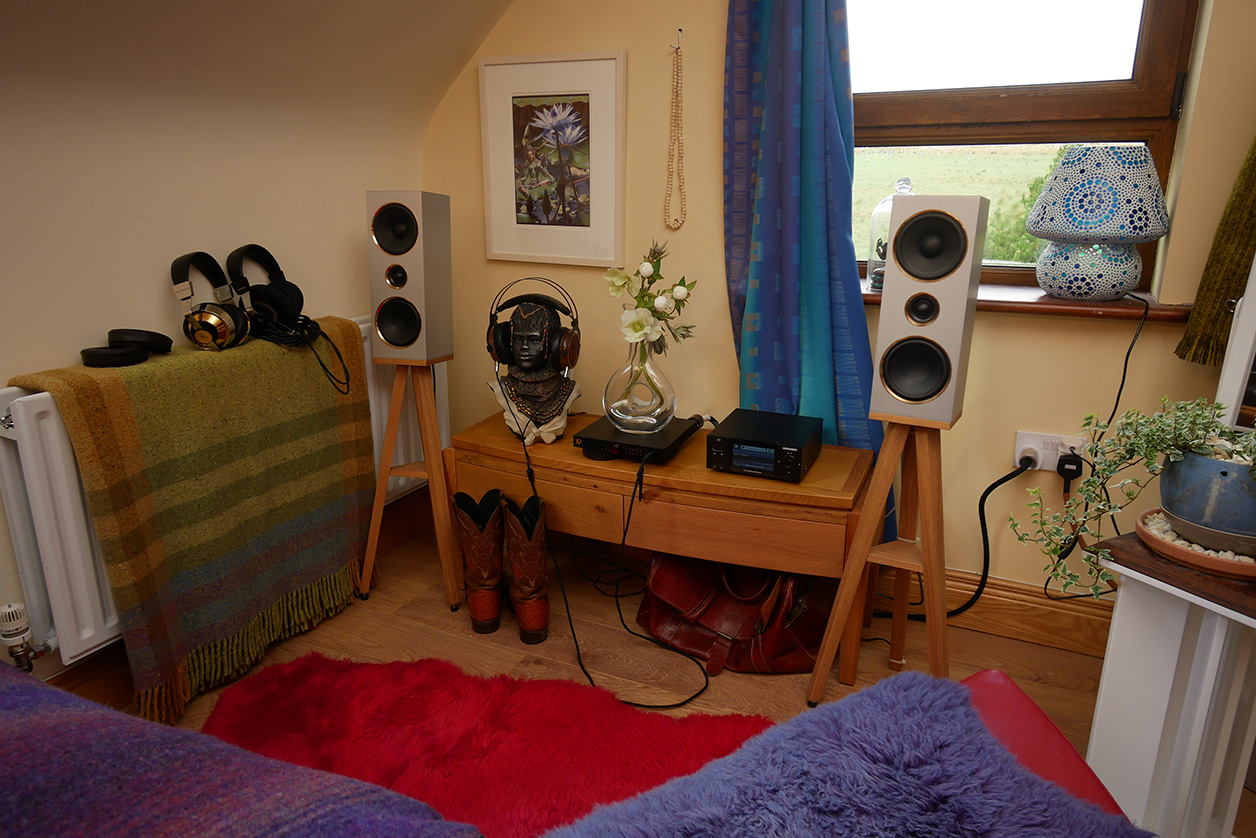 Final D8000. On clamp and cushion comfort, I rate these similar so most high. But Final's concept double-tasks bridge and headband. Kennerton's dedicated headband is separate from their steel bridge so over the long term, demonstrably cushier. On cosmetic pad luxury/aesthetics, Kennerton booked another win. So they did on my subjective quality perception of Wodan's standard headphone cable, never mind its balanced alternate which I'd used on the desktop. Now to sonics. Here Wodan met an equal though it was far from an identical twin. Final's tonality differed. It was bassier so warmer to flood the scenery from below. Overall textures were bloomier so less damped. Given a directly preceding speaker cable review wherein I'd contrasted silver/copper conductors, I'll call the D8000's copper tone, Wodan's silver. The latter is cooler, crisper, subjectively more articulated, precise and dry. In the treble, Final's first planar had well eclipsed my Audeze when I reviewed the D8000. Now Wodan added still more air though neither will meet Raal's ribbons on that score nor on overall resolution, speed and dynamics. Another pointer at the key distinction between these two planars invokes liquids. If Wodan in this juxtaposition was unadulterated spring water, the D8000 added a bit of rose-infused almond oil through an atomizer like a bath oil. That mister injection sublimates the oil to only leave a certain velvety feel. Swirled in a glass, it renders the infused water a bit heavier, then leaves a very thin film. Translate that difference to tonal texture and nail what I heard. One could easily manipulate equivalent offsets by preceding amp. Here single-ended direct-heated triodes like the 7V Elrog ER50 in our direct-coupled Vinnie Rossi preamp have a very similar effect when compared to an autoformer passive like Pál Nagy's icOn Pro4.

Final Sonorous X. This full-metal gold/stainless flagship in 'Dubai bling mode' is physically very heavy. That made it a far cry from Wodan's extended-session comfort. I also had a rerun on the Audeze LCD-XC's closed-in feeling. But here it's easy to bury the Final so 'nuff said. On voltage sensitivity, their dynamic flagship crushed the already efficient Wodan by still needing less than half the throttle. Tonally I had an even closer match for virtual placeholders. But tell-tale differences other than wear remained clear. X had the higher image density or weight. It also staged narrower and more compact. That nearly seemed as though the same amount of musical stuff compressed into less space to feel denser. Whether factual or subjective, the upshot was the same. Wodan made more walkabout room between performers to create more widely-spaced stage action. That made it feel far less 'claustrophobic' so more airy, just not in the typical sense of a more developed treble. On top-end extension and energy, these were equals. Spatially, the Sonorous simply sounded smaller and more compact than Wodan. On perceived linearity and absence of additives however, I viewed them as equals. For half the dosh, far superior comfort and decidedly less flashy cosmetics, it put Wodan in a most flattering light. 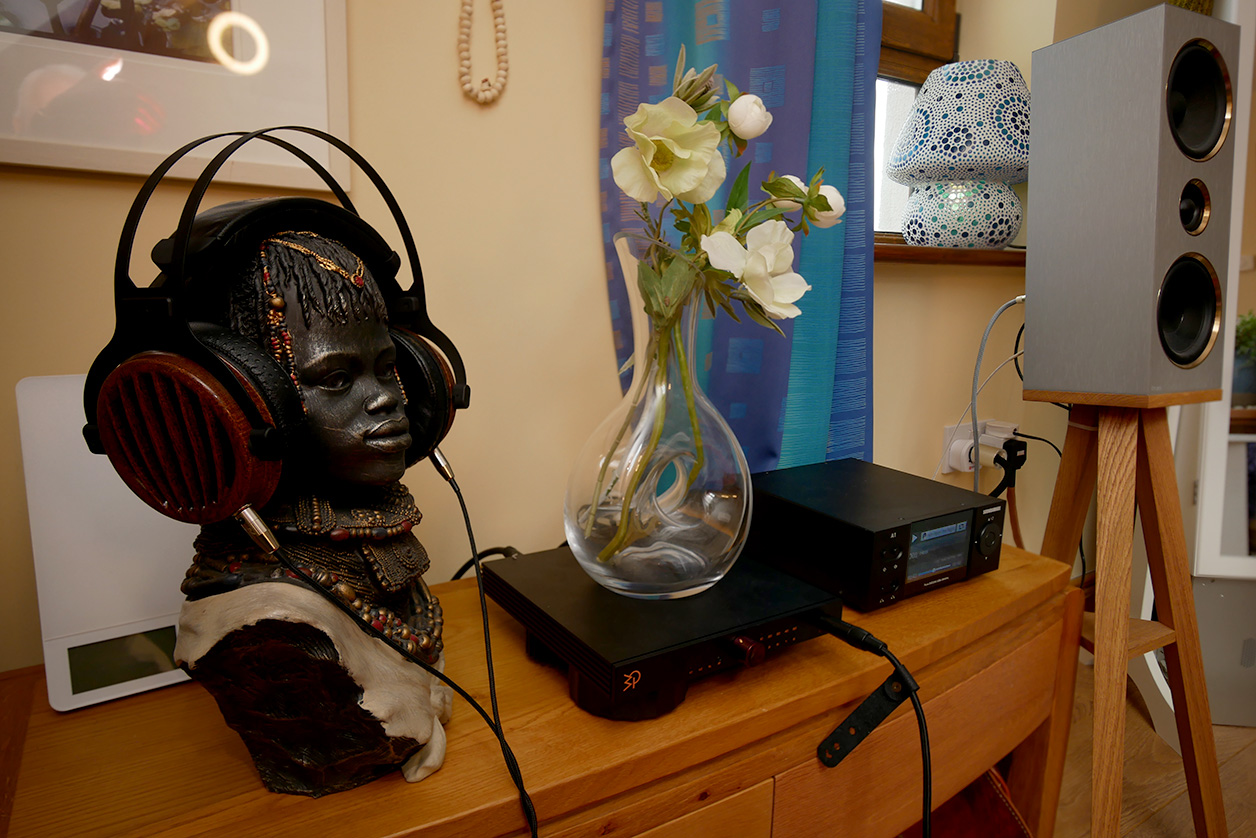 Soundaware A1X and Bakoon AMP-13R. €69 "headphone stand" from TK Maxx. The flap on the end of the cable is the open leather coil holder.

Time to move into the big downstairs system to give Wodan's now profiled behavior the most copasetic ancillaries.