Headphones as Fine Art. With a €70 VAT/clearance fee settled by phone/plastic, I received the below carton. Inside was a black pleather 'camera' bag with handle, zipper, two inside compartments (one inside the lid, one against the back) and shoulder strap. Inside that were all the bits Vladimir had announced. A black envelope with proud "headphones as fine art" imprint held a limited 3-year warranty cert. It was stamped and signed Pavel Safonov. He'd made and tested Wodan serial # WD-023 dated 21.10.2020. "For home and professional use" was another self-explanatory statement on the black envelope. Premium consumer and pro-use products overlap. 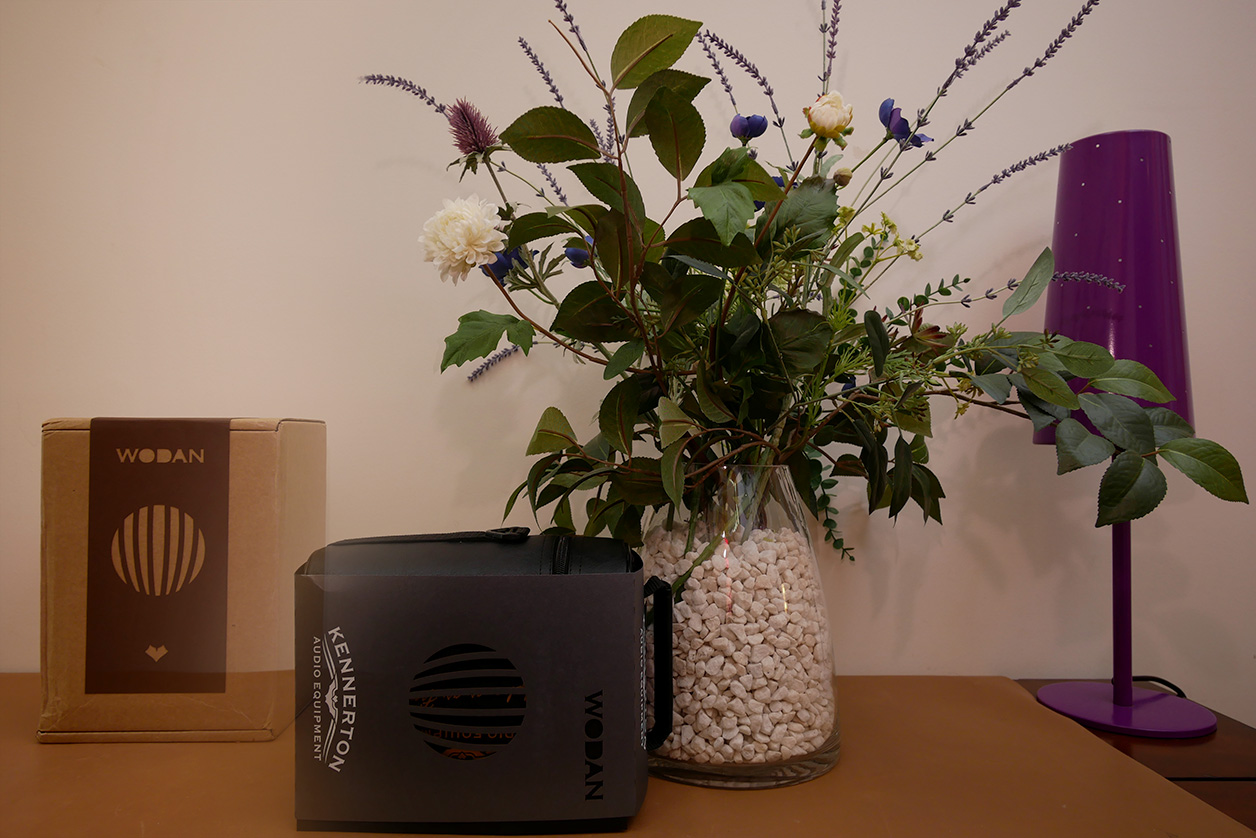 Use the mouse turned loupe over the next image to read the certificate in its entirety. With their leather retainer rims, the spare pads suggested how to 'screw' them on. The limp cables sported attached leather clips to ship neatly coiled and coil up again. The 6.3mm straight version ends in an unbranded plug, the balanced braided one in an McMaxx XLR4 plug. With its self-adjusting elastic head band, Wodan requires zero adjustments. Just pull down ear cups until they surround your ears. Without a mechanical swivel, the angled pads are the only item to fix the fore/aft tilt relative to your skull's shape. I found the clamping force perfectly judged for a firm seat without any undue pressure. Fit'n'finish were above reproach, so quite unlike HifiMan's costlier HE-1000. Its metal finish hasn't aged well and the ultra-thin ear-cushion pleather developed tears. Let's not mention the dreadful crumbling black foam on our Sennheiser's HD800 cushions. With Kennerton's thick leather, you'd have to do a real number to damage them I expect. Luxury has serious benefits beyond bragging rights. And being replaceable, Wodan's pads will never age poorly in the first place. 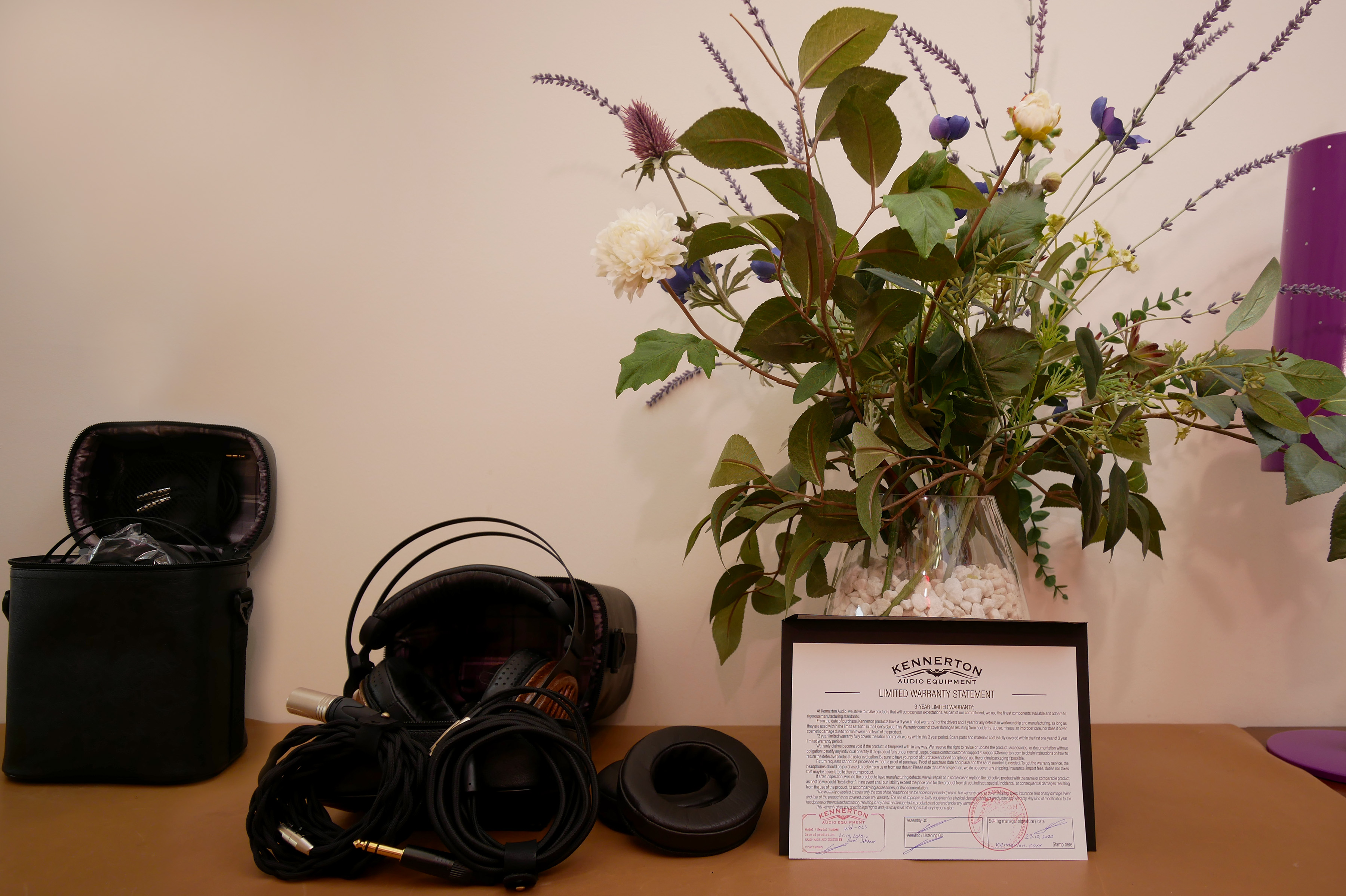 In short, the pre-audition inspection hit all the right notes without a single wolf tone. Time to click out the ends of my balanced Forza Audioworks balanced leash from the Audeze LCD-XC on the desktop and click them into Wodan. Ready. With a fully pre-conditioned cable to share between three headphones, it's how I started listening. Hello Jacques Loussier's fabulous piano trio covering Bach, Mozart, Debussy, Chopin, Ravel and Schumann in high recorded quality.

Here's that setup: HP Z230 workstation on Win7/64, Audiobyte Hydra X+ reclocker coax out, Soundaware A1Pro 4.4mm Pentaconn balanced out. The Chinese headamp/DAC sat at 38 on its dial so well below half mast. It didn't take long to be clear. Wodan was voiced for linearity, not a scooped distant midrange, bass emphasis or extra brilliant lower treble. The soundstage was very broad. Due to excellent percussive accuracy, it was packed with ultra-precise image mapping. The overriding sense? Wodan indeed had been tweaked for high speed without being chased by undue leanness in its rear-view mirror. Already the modest Chinese 3-in-one showed happy reach down into the infra bass though a non-boosted profile could have bass heads hear it as a lack of power. Then wait until you splurge out on a 25wpc Bakoon AMP-13R. That still eclipsed Questyle's current-mode monos fronted by Vinnie Rossi's direct-coupled ultra-bandwidth DHT preamp in the main system. While Wodan's high efficiency invites modest amps to tango without missteps, premium drive still has all the usual advantages. With first impressions captured, let's use competitive contrast to get more specific. 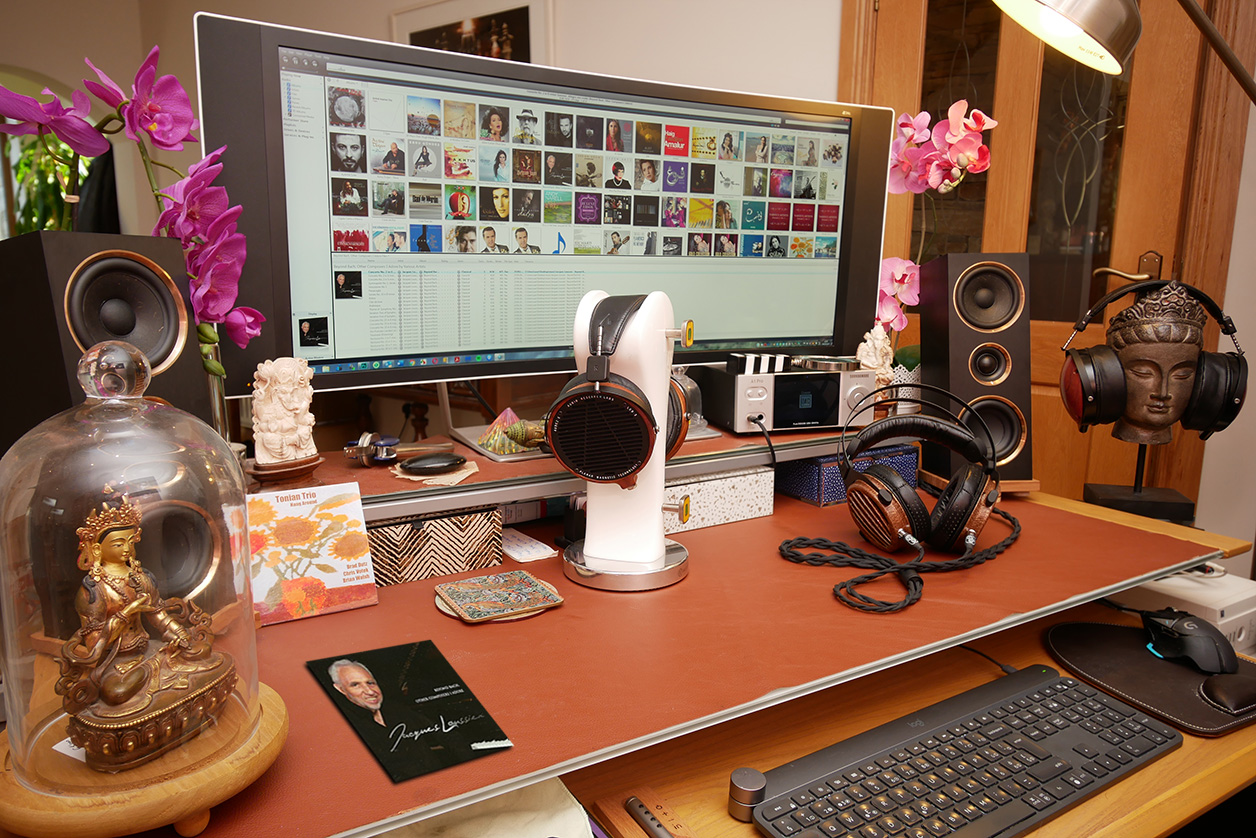 Audeze LCD-2. Higher clamping and harder pillows made for a decisively less comfortable stiffer wear. After a few tunes, the harder headband's contact patch on the crown of my head always irritates. Sonically the LCD-2's musical pace felt slower, overall visibility was less focused so softer and just a bit vague or fuzzy. The upper and mid bass was thicker and boosted. That cast some shadows into the midband. Treble was comparatively hooded and dim. Dynamic shifts were more reluctant. They showed less needle deflection. This added another aspect of feeling generally thick and energetically less responsive or pudgy. By contrast, Wodan was clearly faster, airier, more resolved, dynamic and linear, never mind wore far better.

Audeze LCD-XC. On my large noggin their lower clamping force was comfier than the LCD-2. Being still heavier, they were simply far less park'n'forget than Wodan. Coming off Kennerton's dipole openness, unimpeded lateral air flow without back pressure was imprinted on my experience. I'm actually used to Raal's K1000-style off-ear absence of even contact never mind air compression. Now the sealed cups' effect on air flow telegraphed very strongly. If ears could feel stifled and loaded down because someone forgot to open the windows, that was this model's sensory feedback. XC still had the signature bassiness of early Audeze where I've not heard later models to qualify my statement. So XC had the same opacity bleeding from below into the midrange to express itself as more chocolate-rich and thick. This heavier texturization toned down microdynamic fluctuations, insight and separation to all become points where Wodan led again. In short, this particular Kennerton model exhibited none of the response contours which endow my two Audeze by design. Wodan behaved quicker, more lucid, resolved and linear. It felt like the aurally more advanced high-resolution effort. It had superior treble, reflexes and detail separation. It also was a far happier physical load around my brain than either of the Californians. So team Russia led by 2:0. Considering my prior profiling with Vladimir, that was just as it should have been. Truth in advertising!