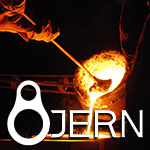 A jerney in cast iron; just not any old iron like granny's rusty cast-off kitchen skillet. We're talking high-graphite iron. What's the diff? If you have the advanced casting technology from Denmark to dull the material, hear for yourself.

These are 3-year old news. Why revisit them now? Because two years of tradeshow limbo just thawed in Munich.

So our Danish team re-introduced the €8K/pr 514 which combines their monolithic so seamless and sealed small 14ES or 14EH 2-way monitor, a stand and a subwoofer integrated with the latter's plinth. That transforms a bass-light two-way into a more hung passive 3-way. Admittedly the woofer is just a 5¼" Seas though this long-throw version and close floor placement still add a solid 7dB of bass output over what the monitor's mid/woofer can do solo. So the combo bolts on reach to a useful in-room ~40Hz we're told, even lower in small rooms. And it obviously does so in stereo not mono.

Capable to a sterling 8kHz before it hits its first resonance mode, this li'l Norwegian woofer is happy on a shallow 1st-order/150Hz filter. That makes for a very gradual overlap with the monitor. The latter bolts to the stand such that it may still be tilted and turned to align with the chair. The combo is just 80cm tall so ideal for smaller rooms. That the construction is serious despite being petite we appreciate from the 24kg it parks on your scale.

Cast iron. It's heavy duty. Who needs a baseball bat? Wouldn't this speaker be an ideal self defense weapon during a home invasion? Actually, it's rather too heavy to wield conveniently. Let's leave violence to the movies and pugilism to football games. Get back to peaceful music listening.

Available powder coats are black, white, casting grey and fire-engine red as in the photo below the break.

Søren and Peter Dissing are 2nd-gen owners of Danish foundry Dansk Skalform A/S. They do precision casting for the likes of BMW, Jaguar, Land Rover, Porsche and Rolls Royce. Ole Lund Christensen in the video, former GamuT founder, contributes his acoustical expertise to the Dissing brothers' sand casting know-how and Jern Speakers are the result. Their patented graphite/iron Vibrakill recipe claims vibration reduction 10 times more effective than wood-based materials and 100 times better than ringy aluminium. Manufacture involves 1'450°C temperatures and ends up with one-piece rounded enclosures which can withstand a 5-tonne load and will last 200 years. "During the cooling process the low-density graphite forms three-dimensional domes inside the high-density iron and it is this fusion which limits vibrations to an extraordinary degree. The entire inner surface of the casting is populated with these domes which break up and reduce standing waves. The domes are structural parts of the casting. They will never fail."

Reading up on this was a real jerney into cast iron of a different kind. After I'd spun this yarn, I was unduly curious to hear a Jern for myself. No wonder they pronounce yearn.

But wait, there was more; even more serious and premiered at the alternate Munich show this year.

It's the €20'000/pr 6½" two-way 35 which Ole calls his best speaker ever; the remote-controlled improved 2×10" €8K F500 subwoofer first seen in 2019; even a new color called gold rose. Each flagship monitor on its stand brings 63kg of vibration-absorbing mass to bear. It combines an elite ScanSpeak Elipticor tweeter with a custom version of Purifi's radical mid/woofer also seen in new speakers by Javier Millán, Joachim Gerhardt and Wolf von Langa. Due to being sealed not ported, the Jern's -6dB bandwidth is 45Hz-26kHz @ 89dB/2.83V/4Ω. In-room performance in smaller spaces is said to be good to 30Hz. The crossover cap is a Mundorf silver/gold/oil version, the flat coil from the same catalogue a 0.18Ω/1.6mH type. Dimensions are 28x28x40cm. Readers who know of my fondness for properly dovetailed sat/sub solutions will appreciate my sudden interest in delving deep into Heavy Metal, a genre I usually stay clear of with a 10-foot pole. Now I'd use the same pole to reel me in some big-boy Jerns. Hot damn.

Of course who'd volunteer ship fees for such hefty review loaners? I could see an Irish customs inspector at Shannon airport scratching his noggin. Compact. Very heavy. A thought bubble forms. "Are they smuggling gold bullion? Grenades for across the Northern border? Best take a quick gander." A few groans later: "Do I remember how the bloody packaging went together? Never mind, it's all legit. Let's tape it back up. Where's my calculator? Let's see how much VAT we can bill." A minute later: "Damn. It's from Denmark. No VAT. Somebody's a lucky bastard today." The end? So I thought. But a lucky bastard could always hope. And that's how I'd concluded the above post-show feature. Being a dastardly schemer, I then forwarded the link to Jern. A day later I had a response from Florida-based Steve French, their international sales manager. "Thank you for your exposé of our speakers at the HiFi Deluxe. Jern worked hard over the last four years to establish themselves as a serious speaker manufacturer. Now people are slowly coming around to agreeing that these are really quite special. I didn't venture to Munich either this year. Jern showed for the first time at the lower-key alternate event. The MOC has become crazy costly. Unless one has an upstairs glass room, few will visit. We tried in the past with a downstairs cabin. Nobody of the international press bothered unless they were friends or we managed to snag their walk-by attention. Jern would be happy to send you some speakers for a proper review. Let's discuss details." So not the end then. Rather, a nice beginning.