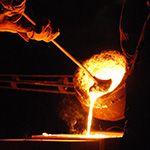 A crew of cast-off characters

Jern use graphite-loaded iron, EBTB aluminium alloy. As their names indicate, Concrete Audio and Betonart use specialized forms of concrete. The Living Voice horn trumpet is bell bronze. Æquo's still pending Adamantis will use their own nano-composite liquid Diluvite metal. Rockport use pre-tensioned glass-fiber reinforced resin shells bonded with epoxy. Estelon run with synthetic marble. Raal's discontinued Eternity project used bell bronze for its woofer section. Common to all—this short list makes no pretense at completeness!—are/were cast enclosures either monolithic or joined as clam shells. That relies on costly custom molds thus differs from 3D printing in sand like Deeptime's lifestyle system or selective laser sintering in glass/nylon like Node Audio's Hylixa. But if we follow the logic that a loudspeaker enclosure shouldn't sing along with its drivers but keep schtum, then the quieter the cabinet, the lower the box talk and the cleaner the sound. Now glued-up MDF builds are rather primitive compared to the lengths the mentioned companies go to create more inert structures. One can use metal like wood by bolting together panels. Synthetics like Krion too may be heat-bonded in panels to suffer the same joints, seams and corners as basic mitre-folded MDF.

Next time you flip real or virtual pages to check out apparent flagship loudspeakers—'apparent' correlating high prices with advanced engineering—ask yourself how their enclosures go together and what they're made of. Mind you, none of it predicts sonic excellence per se. Still, if you spend the long green, may you not hope for better than MDF/HDF skeletons disguised behind glossy lacquers? Casting loudspeaker enclosures is far from convenient. Cast materials shrink when they cool down. Compensating for that to arrive at just the right tolerance isn't easy. Perfect finishing may involve lengthy deburring, intense surface smoothing especially where clam shells join and removal of other imperfections before applying a final finish. That's laborious. Mastering all of it with one's casting material of choice is why the Dutch Adamantis project remains delayed. Nobody ever cast in Diluvite before. It's learn as you go, each discarded mold an exercise in lost time and money. Gluing up some MDF even when panels double up with (cough) special resonance-attenuating resin is so much easier. Though he prefers solid wood enclosures as a different class of speaker design for another day, Martin Gateley of sound|kaos has his driver baskets cast in bell bronze by this Swiss foundry of traditional cow bells.

By now you've caught up with just how literally off my header was. Ours really was a rare cast of speaker characters which are cast. They were not castigated cast-offs. But a deceptive lead-in is often the best lead-in. Particularly interesting here is that the inherent process of casting is quite medieval. Whilst modern equipment factors, it's still hot physical graft not unlike modern Mexican tequila production. The basics were done this way already thousands of years ago. And like tequila can only be made from one type of agave whilst mescal is made from the other 249 varietals, each cast speaker brand proposes its own tequila but as a genre, they're all mescal. They're also artisanal and based on old traditions which made things of noble materials which last. These aren't things one casts away because they broke. They're treasured and passed on to transcend today's built-in obsolescence. Whilst speaker drivers might need eventual replacement, cast enclosures will still greet future generations.

PS: If you know of more speakers that should be included on this page, please let me know.