Gaming my wait, I already knew the review's conclusion. It stood regardless of personal outcome. I'd combine our standard Blue Moon and Realsization awards. The latter has always been reserved for 'cheap but cheerful' finds. It's heavily weighted on budget value à la Audioquest Dragonfly or first Clones Audio integrated. Nobody walking past any homeless people could in good conscience call €3'249 budget pricing. Yet our Blue Moon award alone doesn't properly emphasize the exceptional value which today's component embodies. It competes far beyond normal beyond its price so twice beyond. It does so on sonics plus featurization. €15'000 components doing just one thing can garner our award if they do that one thing well enough. Giving the same to iFi's Pro iDSD Signature then doesn't say enough. Switching to our Realsization award would grossly bust its intended budget. The obvious solution was to embed the latter into our Blue Moon award. It signifies extraordinary value that's not tied to a sub €1'000 sticker but looks at what it competes against. Here that shakes out to an unexpected admission. If I could afford to; and if Victoria 'Vic' Pickles had happy 'we killed it' news – I'd replace the converters in our downstairs main system and upstairs speaker system and upstairs bedside headfi. I'd go in heavy all guns blazing so in triplicate. myFi(nd) indeed. When I admitted to myself that this was how my inner judge called it, the hybrid award solution arose by itself. You might say that one hybrid does for another. It rather balances out perfectly in the end. 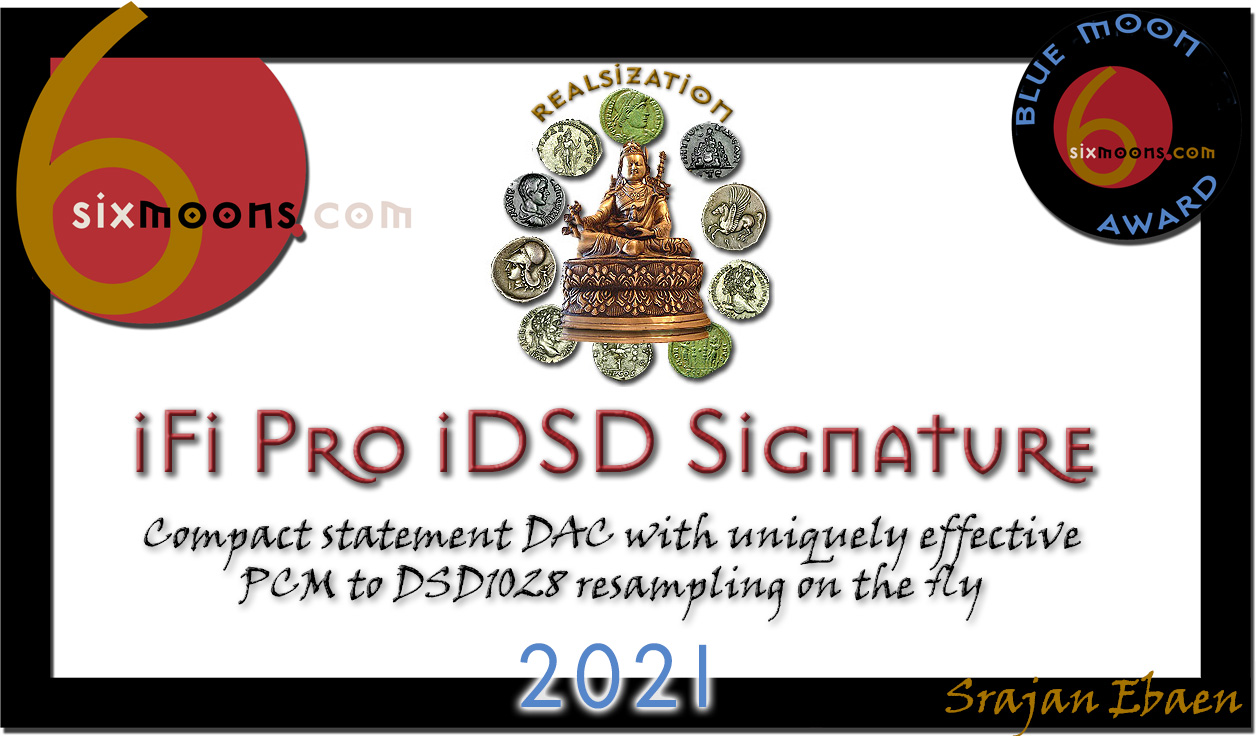 The end? Let's hope not. Should it be, I'll finish up now with a final psych profile. Without any steering based on specific tech allegiances, my systems over the years had ended up with discrete R2R converters for their 'organic' character allied to subjectively accurate timing. My present machines are by Denafrips, previous ones had been Metrum. It's when Aavik's three DACs played the domestic circuit earlier this year that I heard very similar qualities at still noticeably higher resolution. At €20'000 that was only right. It planted desire though to replicate my Aavik Aha moment for a lot less; and for a lot longer than just a few review weeks. Where the iFi goes beyond my residents is on energy transmission aka excitement; more color intensity particularly in high-rate DSD; and greater low-level resolution. In some ways it's more of the same just more. In other ways it's something new. The combination of it all particularly at this €3K budget is something I've not heard before. Neither have I come across this particular menu of features. Personally I'd never use the tubes nor WiFi/Bluetooth streaming. Usually I'd be reluctant to pay for, say a phono stage in an integrated when I do no phono. Here I'd not be bothered in the least by features beyond my personal needs. I'd really not pay extra. My current converters which can't do these things nor headfi already cost more; some a lot more.

With our fast neutral electronics beyond the DAC—autoformer passive pre, DC-coupled class A/B lateral Mosfet amps of unusual bandwidth—the Thorsten Loesch mix of sonic attributes injects just the right amount of body and saturation without at all stealing from speed, ambient recovery and micro detail. Instead it elevates the latter disciplines by very meaningful degrees. It really is a Signature accomplishment; with metal remote and outboard linear power supply. By December 17th, I had word from Victoria Pickles on tech Colin's findings: "I've looked at your sample. It had a fault that made it always turn on in service mode to ignore filter and input selection. I've isolated it to a misaligned connector on the front two left controls on the main PCB. Unfortunately the tube selector switch has taken a hit and must be replaced. Trying to source one now. Otherwise I've removed the WiFi module and it works fine apart from the loss of that function of course." With that, I'd soon be a proud owner. In the meantime, the deck had popped up here in my '2021 Litter' of favorite discoveries. I'd also heard from Rethm's Jacob George in India. "I've been waiting for a long long time for you to do this review. Yes I did read Dawid's of the original but I still wanted your thoughts on how it compares to the big boys. I've had my eye on this unit as it's what I've always wanted to use as the 1-box front end for my Aarka monitors. I plan to do shows with just the Aarka and Pro as it can stream Tidal and work as a preamp. Super simple system providing audiophile-quality music. I await your further evaluations especially of the preamp stage and valve option." Now I could look into those aspects in the bigger downstairs system. 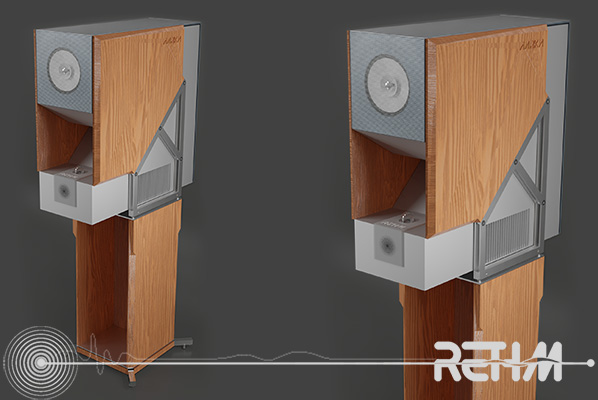 Before I managed, Kiwi importer/reader Peter Hardie checked in: "iFi's Signature would have been off my radar if not for your review so thanks for the prompt. I'd briefly heard their previous Pro iDSD and at the time was underwhelmed. The customer who'd brought it along for comparison bought a Terminator. I found a significant improvement to be gained when bypassing the Signature's internal USB. An I²S input is the only omission. I'd rather have that over tubes. I'd been floored by the combination of Antipodes S20 reclocker (bought for USB to I²S adaption to Rockna's Wavedream). Fed by JRiver from files on an iMac I heard no need for addition of an expensive server. Streaming and network audio sounds to me a pale approximation and I'm a committed to vinyl anyway. Adding iFi's excellent iPower Elite 12v supply still improves the S20. The gain in low-level resolution, impact and decay I'm experiencing on Raal headphones kicks emotional engagement to another level. iPower'd S20 via S/PDIF into the Signature, I struggle to find any flaws. It's a way up to the level of a dedicated server without the excessive expense."

That's precisely been my experience with USB bridge/reclockers by Soundaware. Off our music iMac I enter those USB and exit I²S or AES/EBU into a DAC; or directly tap their SD card reader. I haven't yet heard a server I'd rather have. In theory, Peter's I²S omission makes a point. In practice however, any I²S port must really offer 48 different pin configurations to guarantee hand shakes with all possible I²S transports. Implementing that is a complex undertaking nobody else has sorted without custom orders. At iFi's price point it remains an obscure feature and one which makes less of a sonic difference than with/without tubes. If we praise this iFi for its sonics, features and price, it feels unfair to still ask for universally adaptive I²S. Anything not adaptive would only frustrate shoppers keen on the feature who then find that its fixed pin assignment doesn't match their transport's to cause distortion or no sound at all. But… with Thorsten Loesch an unusually clever designer, he might just be the man to master a guaranteed I²S protocol, perhaps via expanded dip-switch array à la Antipodes? In which case, that glove just hit the floor. Billy kabob kaboom. Back in the here now, I'd use his AES/EBU input off the D300Ref USB reclocker to take the downstairs performance measure against our Denafrips Terminator Plus, then bypass our usual autoformer passive preamp with the Signature's variable direct connection to test Jacob's minimalist hookup.

Upon return from Blighty, the downstairs system suffered ugly clipping. I hustled upstairs to hear the same thing. I had iFi's XLR output at fixed level so ~12V(!). Now recorded peaks overloaded both preamps which happily handle up to 5V/10V on RCA/XLR respectively, just not Thorsten's extra-hot values. Since late last year, Pál Nagy¹ has in fact uprated his autoformer's Fet switches to run on higher supply voltage. That digests up to 8V/16V thus tolerates just such intense gain poisoning. By switching to variable mode, I set iFi's attenuator to 12:00. That fixed my issue. If you encounter the same or find that your preamp goes too loud far too quickly, use either of the variable settings then trim the output voltage with the DAC's own attenuator to return to ~2V/4V normalcy. Or eliminate a preamp. I was just about to. But first, a comparison to the €5'900 Sonnet Pasithea still in from its just concluded review.
__________________________________

¹ Pál's 'favorite' violator of common gain sense is the Aries Cerat Cassandra DAC because a client of his insists on using its 10V outputs into a Jadis tube amp with 250mV input sensitivity into +100dB hornspeakers. While I had Pál on the line, I asked what standard pro-audio levels are. "+4dBu = 1.23V single-ended, 2.46V differential balanced." By that metric, iFi's 'pro' setting is off the reservation. 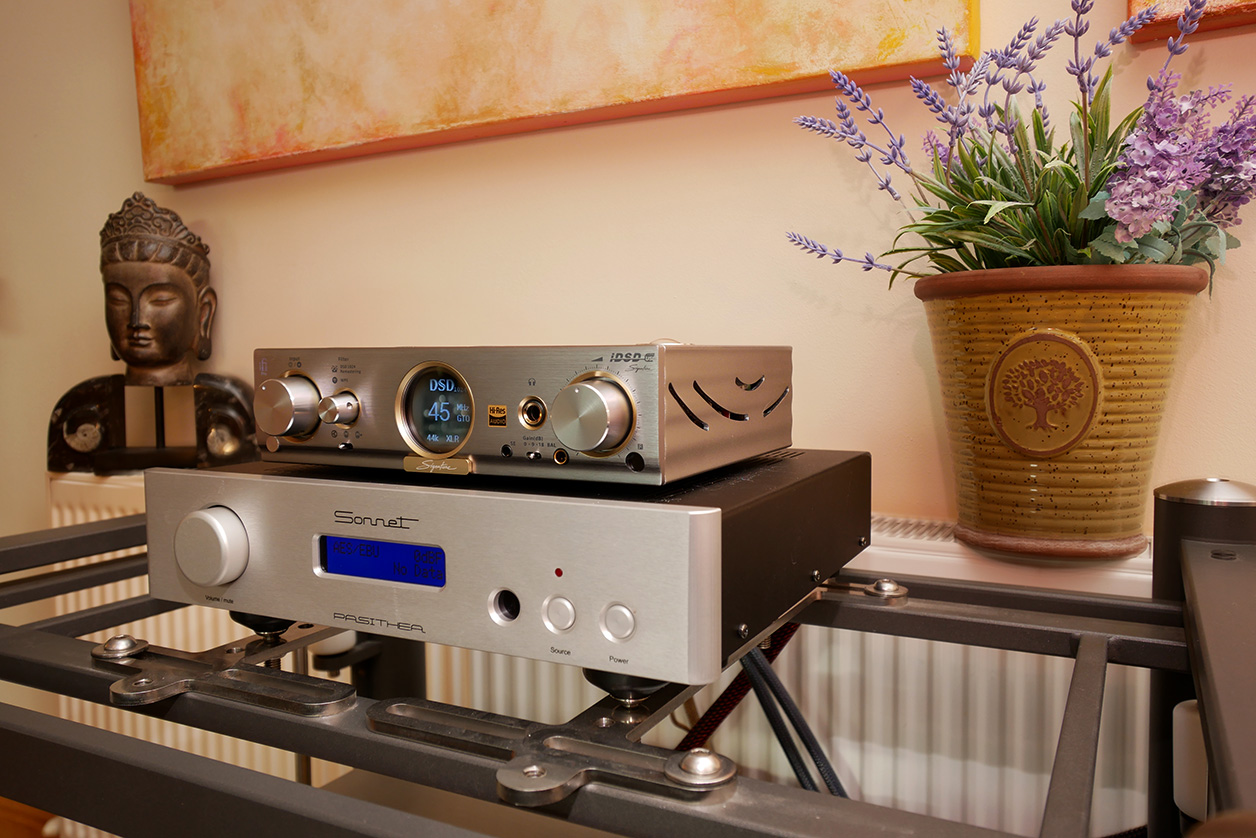 More cash more gain. When such 1st-grade math inverts, one reads of king slayers and game changers. Not in this instance. The Pro iDSD Signature played prince to Sonnet's queen. Plainly the Dutch ran a still higher game with more overall gravity, more depth and more noise-floor excavation of micro detail. Its own review told the tale on how. Priced at roughly half, the iFi counters with more than doubled-up featurization—headfi, networking, WiFi, PCM⇒DSD resampling, filter choices—so pulls extra hard on the more-is-more corner of the math. On that score the Sonnet is more minimalist expert than advanced do everything'er. No inviolate rules had cracked. All was well with the world. Pay more, get still more advanced sound quality.