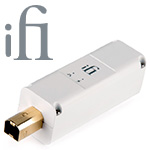 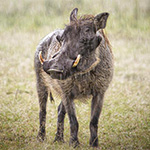 By plugging into the receiving DAC or DDC, the iPurifier3 sits at the very tail end of the USB pipeline and exploits the cable's resistance for added efficiency. It's powered by USB's 5V line so requires no external power.

I met the warthog while on USB safari. When my trusty Audiobyte Hydra X+ USB bridge died of old age, my iFi DAC suddenly met USB in person rather than purified and already converted to S/PDIF. After I installed iFi's USB driver, Win10/64 saw the device as 768kHz capable. I decided to try Audirvana Origin's r8brain upsampler to send signal down the USB offramp at a reckless 705.6kHz speed for good ol' 44.1kHz Redbook. Rather than act like loads more jitter as expected, the sound was superior to letting iFi's Cassiopeia FPGA handle upsampling. My computer's bigger processing power took the lead. Now Old Faithful the Horned Audiophile whispered sweaty nothings into my ear. Shouldn't I off-ramp in high-speed USB 3.0 style? To hear a potential difference, I bought iFi's ribbon Mercury3.0 USB cable. Contrary to expectations, it seriously trounced my prior upscale Vermöuth cable. The devil had nailed it. His horns were still sharp.

Then he reappeared to poke me with raunchy visions of a new USB bridge. Replace thy departed Hydra. Serious a'philes isolate. They don't let anyone drive USB direct. Okay already! Doing the Google dance to sift through affordable options, I ended up with a Singxer SU-2. That netted lots more brownie points for USB; including a very mild one for clock-syncing the bridge to iFi's own clock. Alas, now the USB 3.0-terminated iFi cable no longer fit. I was back to sipping cheap Vermouth. If I wanted to continue with the ribbon iFi, I needed a plug adapter. Doing another Google gigue, I chanced upon the warthog. Hello USB 2.0 B to female USB 3.0. Except this was no mere plug adapter. It actually was an active noise filter. How much noise had I really left? 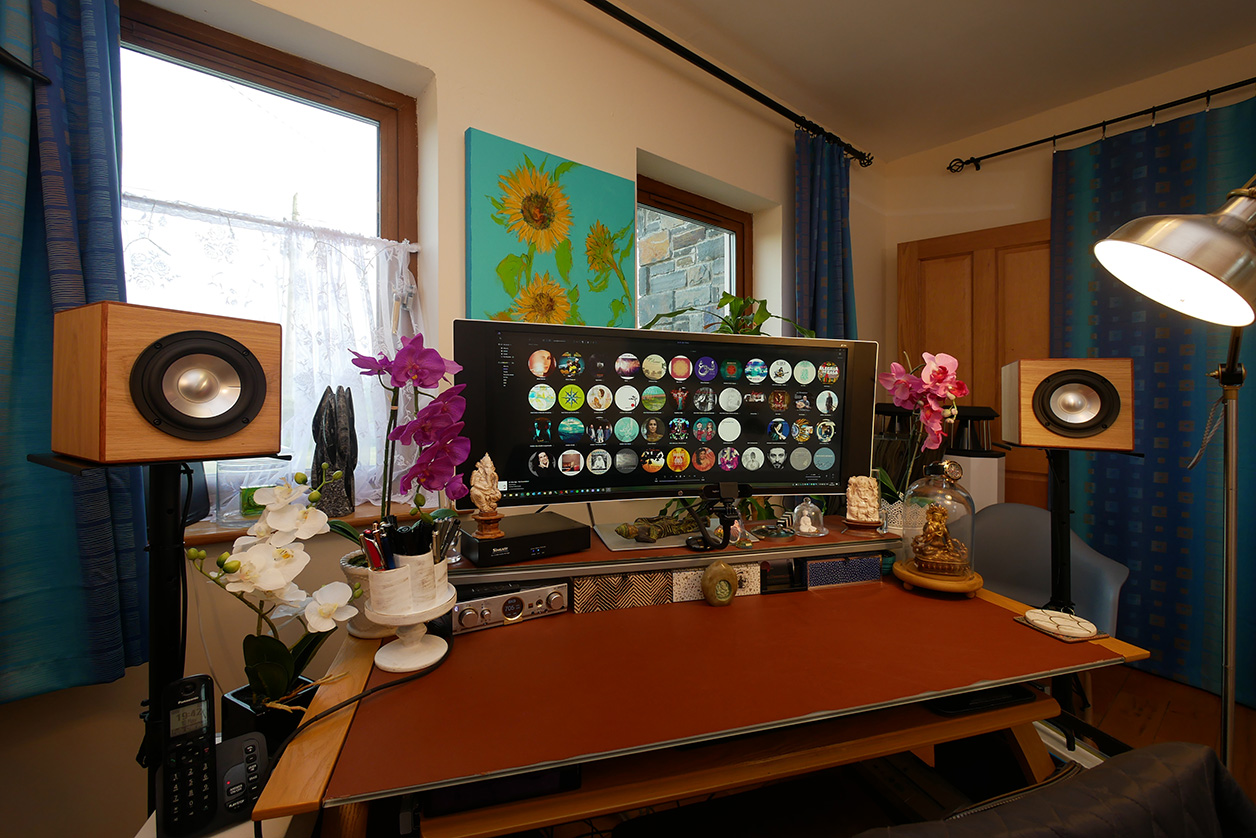 Surely now I gilded the lily. How much geekery may one throw up before enough is enough never mind too much? I was prepared to look foolish. It's only me I see in the mirror. When the warthog snuffled at my door, I promptly installed it plus the Mercury3.0. Damn if the sound didn't get more substantial; quite as though I had turned up the volume – and not insignificantly so. Old Faithful had called it. But was it the cable or the iPurifier3 that made it so? I pulled the Mercury3.0 back out, left the warthog in place and put the Vermöuth back in. Not nearly as good. Just as my first meet with it had suggested, the Mercury3.0 really seems to be a hammer among cost-effective specialty USB cables. But the warthog wielded its own hammer. That hit me when I ran the Vermöuth solo again. The warthog's hammer was lower whisper satisfaction. With it guarding the Singxer's USB entrance, I could listen at still lower volumes and not feel anything drop away. In my book that's virtually always a sign of a lowered noise floor. It's like cutting a lawn as short as possible. Whatever hid in the long grass now peeks out. Grass length stands in for noise. Lower noise has micro detail previously covered up stand tall. Now one can ramp down the SPL and the really small stuff still sticks out above the noise. Mow thy lawn; as short as possible! 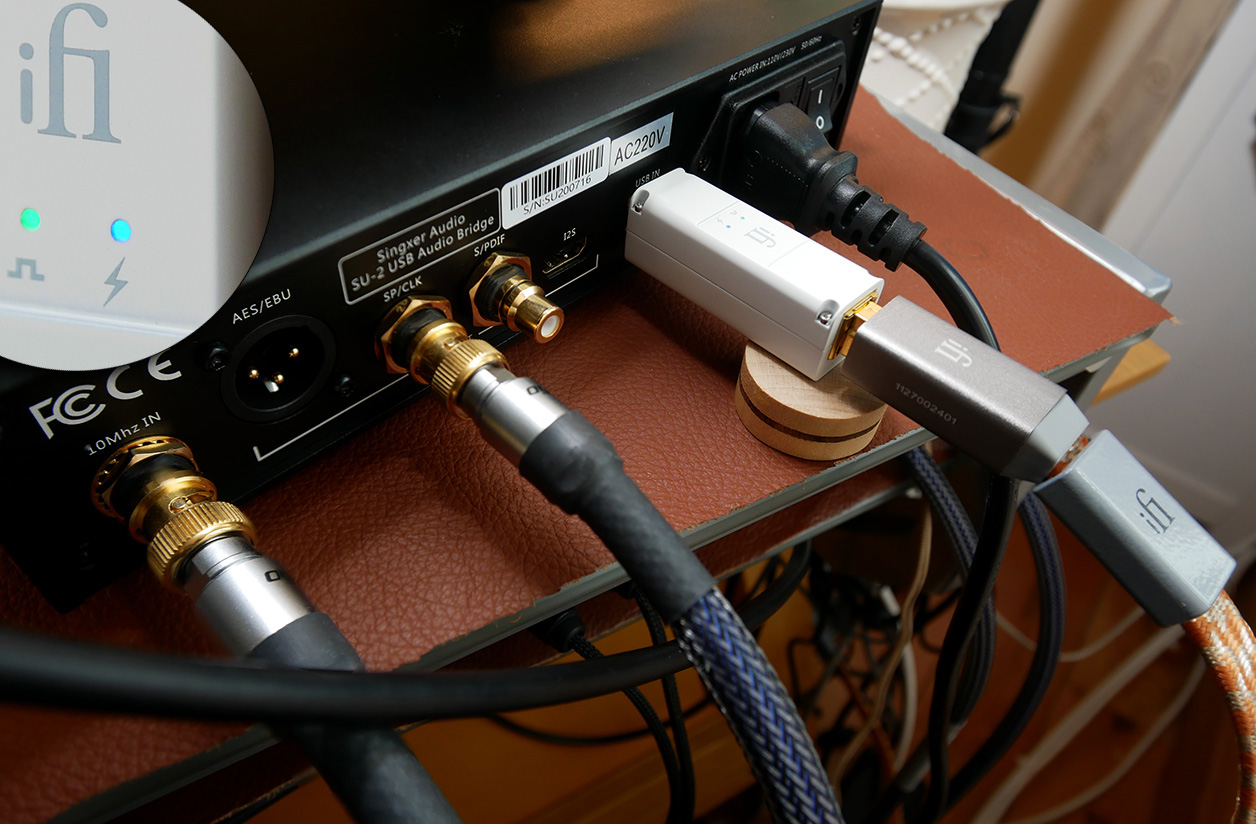 Duh. The iPurifier3 is a noise filter. Of course that's how it would manifest. It says so on the tin. But it's nice when bold advertising claims come true at the ear; even with two subsequent noise barriers in the Singxer SU-2 then Pro iDSD Signature. When it comes to noise, we can never have too little. And here it seems that becoming a serial noise offender reaps benefits. Multi-stage noise suppression really works. More makes merrier. At the cost of two posh dinners for two—okay, with a bottle of wine perhaps—iFi's iPurifier3 aka the warthog will continue to give satisfaction long after those meals have been digested, flushed down the (cough) loo and forgotten. Hey. Priorities.

Now my desktop remodel is complete. Time to forget the hardware and focus on the software…