Big is beautiful. Men's and women's clothing shoppes cater to the motto. In our interconnected society with its new words and actions—take sexting and viral body shaming—it's vital that between the two dangerous extremes of anorexia and obesity, there be an open call to embrace all the body types, races and fitness levels. The narrow standard of quasi anorexic androgynous white fashion models causes distorted body ideals amongst the impressionable, young and fashion conscious. But from race jockey to sumo wrestler, from swimmer to rugby player, there are many forms of fitness. From lanky to stout, there are many expressions of genetics and lifestyle. Variety is the spice of life. To stay on a guitar binge, a fusion of Spanish Flamenco and Algerian chaabi shows how next.

"I have tried dozens of different tubes now. The L2 advantage is that one can micro fine-tune the sound character of the loudspeaker/amplifier interaction. A/ If one needs a bit more resolution, more clarity, less 'velvet and honey', there are the PX4, SV811, 183/483 (5-volt 45) or TAK 300B (the last being borderline between A and C). B/ If one needs a bit more soul and sexiness, the 300B is the soul-ution (TAK, Elrog, Sophia Electric). C/ If one is already balanced but longs for a bit more meat-on-the-bones presence, for me the 2A3 and 6A3 are clear winners, with the JJ 40 coming out on top. In my room, the L2 ⇒ Berning VT52 ⇒ Nenuphar combo is really magical. The best sound you and I heard together back in the old room was less than 75% of what I'm hearing now. I purposely didn't mention speed as an individual character point because the OTL amp supersedes any such influence from the L2, being OTL-ightspeed itself."

That was my Swiss friend Dan after further experiments with his latest acquisition, a Vinnie Rossi L2 linestage. That breakout component accepts all 2.5/4/5V direct-heated triodes with the flick of a switch. Contrary to the immutable ideal of one fixed absolute sound, Dan's attitude reflects openness and curiosity to experiment with different moods and fancies. According to his selection parameters, Shinai's sonic contributions played it capital C for massive meat-on-the-bones presence. As I learned, this compounded and intensified at higher volumes. Things didn't just get louder. They grew more and more thick. For my tastes, this quickly exceeded the attractively luscious and veered into the opulent extreme of gone to seed. As such, it also more and more opposed separation and discretely spaced layering at which our LinnenberG Liszt and Bakoon AMP-13R so excel. Take the "Chisera" track of Juan Carmona's genre-crossing Sinfonia Flamenca as an example where those qualities matter a lot.

As the big-is-beautiful opener set up though, it's imperative to separate personal preference and taste from generalizations. Each system wants more or less of certain qualities. Each listener entertains his or her very specific ideas where the ideal balance lies. This can even change with time or exposure. I'll thus just say that in our context and particularly so at higher SPL and on more complex fare, I found Shinai to get dense to excess. I could delay the onset of that action by deliberating leaning out both the speakers and the front end like with our silvery/platinum COS Engineering D1 DAC and the Accuton-fitted Albedo Audio Aptica speakers for example. But on balance, Massimiliano's aesthetic and my own begged to differ. We plainly diverge on how big is beautiful. I'd only enjoy his dose on simple fare played back at lower volumes. Far more important of course is that my results utterly and completely validated his project brief of cloning deep rich tube sound from transistors pure whilst transitioning solid-state's superior current drive and damping factor intact. If you prioritize really big tone and maximized sonic materialism—again the 6SN7 triode family suggests itself as a useful pointer—this Magnetosolid® integrated amplifier from Italy should be on your short list particularly if you prefer not to use any actual tubes. As Juan Carmona and Larry Coryell demonstrate, playfulness is key.

Let's go back to the beginning. Tube sound. Is it due to the valves themselves? A particular harmonic distortion profile? High output impedance? Simple circuitry? No negative feedback? Output transformers? All of it? If you're Massimiliano Magri, you'll answer that with tube-type circuitry to include top-shelf output transformers and no negative feedback but atypical low output impedance for high damping. His is a surprisingly effective solution to this age-old dilemma or conundrum. It's also a real wakeup call for what's possible from solid state if you know where to push and pull, nip and tuck. In an industry where circuit innovation often gets demoted to instead elevate shiny chassis and thick face plates for the old-wine-in-new-bottles deceit, such novelty is a breath of fresh air. Saluti! 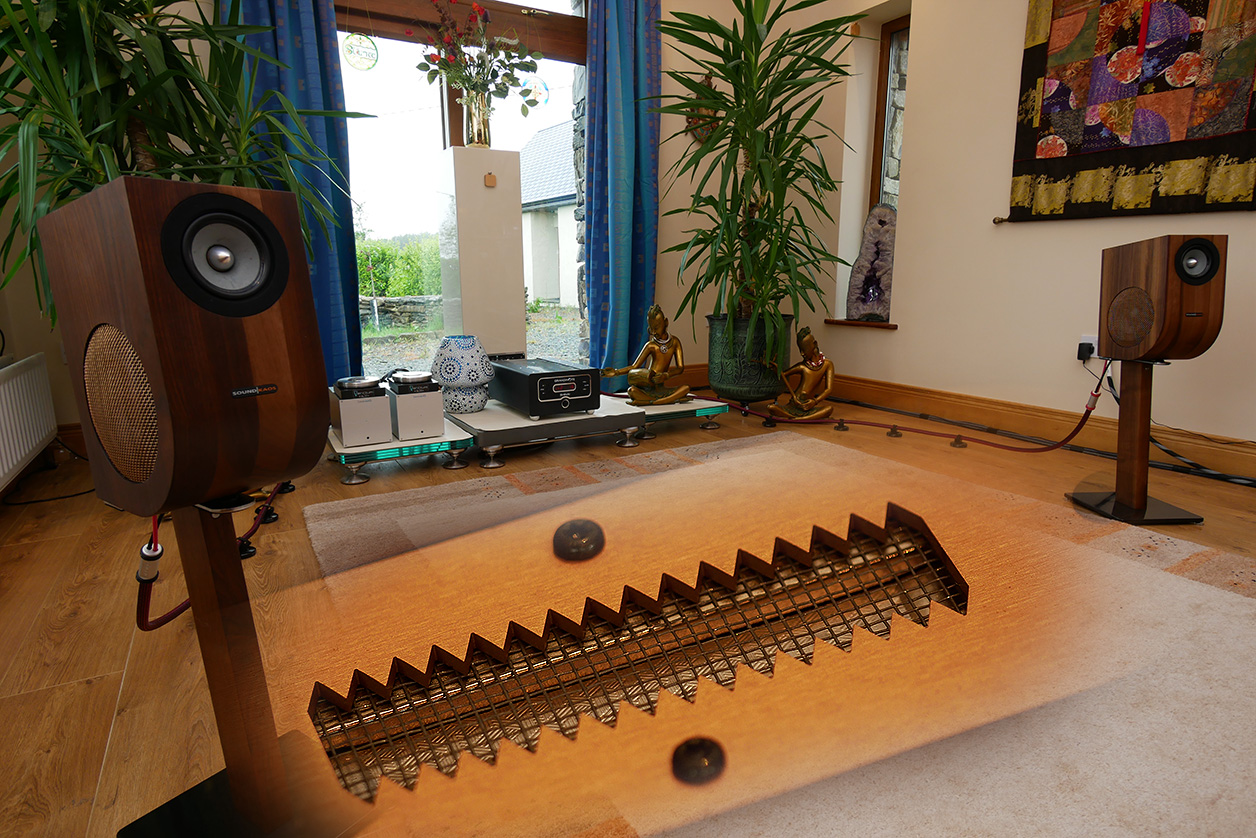 Postscript: The same day that Shinai was due to heave it and pack, the Munich show pair of sound|kaos Vox 3f landed. Naturally those connected up to watch whether any sparks would fly. With a petite widebander augmented by upfiring ribbon tweeter in a custom bronze waveguide plus horizontally opposed 5" woofers in a rear-vented solid Walnut cab, this Swiss compact rates an ambitious bandwidth of 35Hz-35kHz. The speed and roof-down openness of the front/top combo shows great benefits of small transducers for the vocal band and higher. Simultaneously, raw mass of how much sheer air is moved scales down below the lower midrange. Into this very breach stepped Shinai's now strategic and welcome collagen treatment. It served as timely reminder that the amp/speaker interface is critical in how a given item in it presents. What demonstrated as excess before now felt dosed just right…