At 25 net/ea. arriving in two sturdy cardboard boxes, walking these amps about felt more laborious than size suggested. "Serious iron inside" would have been that old Intel sticker; if computers did big linear supplies. But they never do. 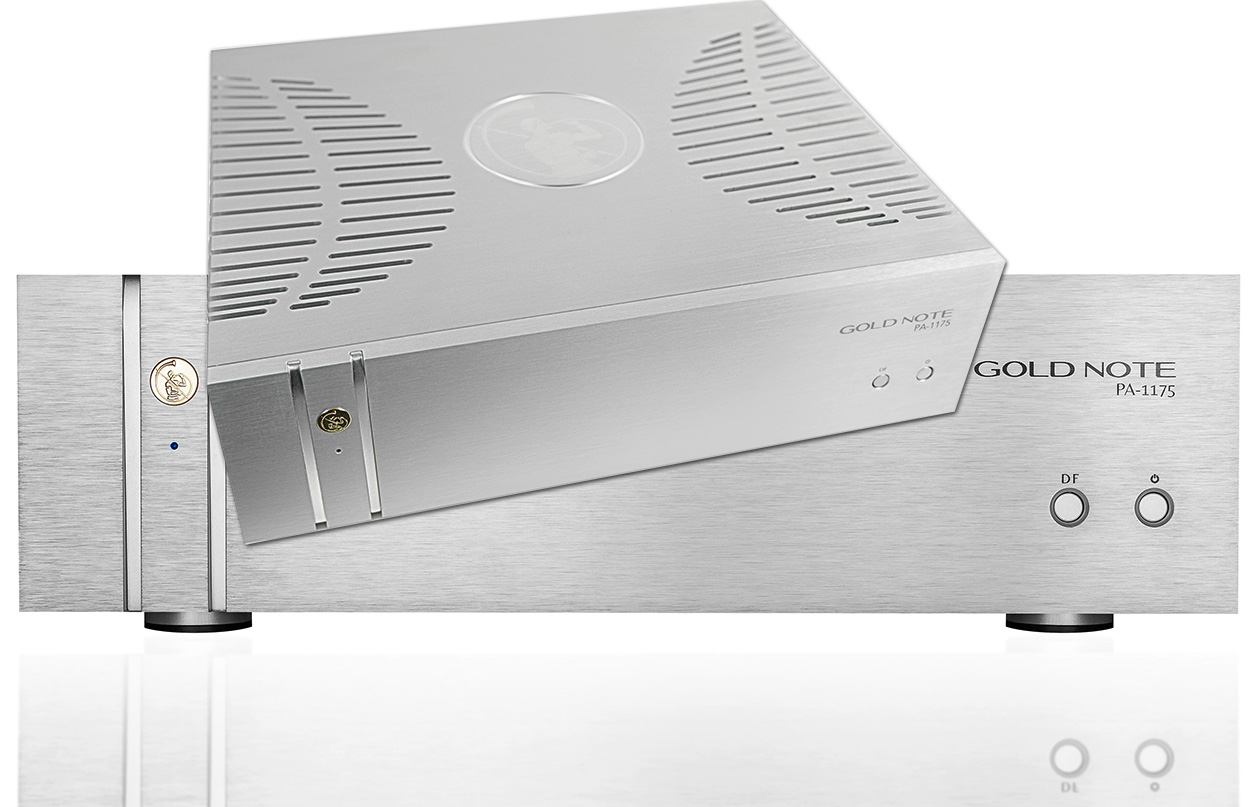 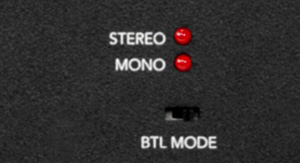 A non-accidental thus properly recessed reluctant slider in the back came with clear associated red LED to indicate stereo or mono selection. Plainly marked binding posts showed which output terminals to use for high-power mode but not which input. The frontal 'DF' button turned the power light blue for high, green for low, selectable on the fly for instant sonic judgment and unmissable identification.

As with all current Gold Note models, the enclosure was a vault of solidity and rather robber proof again in lacking all screws on the front, top and sides. Just how to crack this vault without special tools or risk of marring the flawless metal skins remains a mystery. Whilst ultimately cooling slits are just slits, nobody will refute that the famous Italian flair for style has pulled off something unusually dialed here. With cleverly asymmetrical swoops and unequal spacing, what otherwise would be yet another rectangular box has been transformed into an understatement of quiet elegance. Three colour options including champagne to play on the company name plus three options for the swappable vertical speed stripes plus that deceptively faint logo treatment on the cover showing an ancient Roman blow a circular trumpet wrapped up the roaming eye candy aspects. Then it was time to clock time so these wouldn't battle our resident LinnenberG Liszt with insufficient break-in.

So the PA-1175 MkII did some limbering-up rounds with a pair of Audio Physic Midex also in for review. In mono mode and fronted by our usual Wyred4Sound STP-SE MkII preamplifier, sonics were ultra precise and controlled but cool and shy on freedom of breath. My wife called them highly disciplined. That really nailed it. Since the speakers were on short-term loan, for them I reverted back to our LinnenberG Liszt regulars to not get confused about who was doing what. 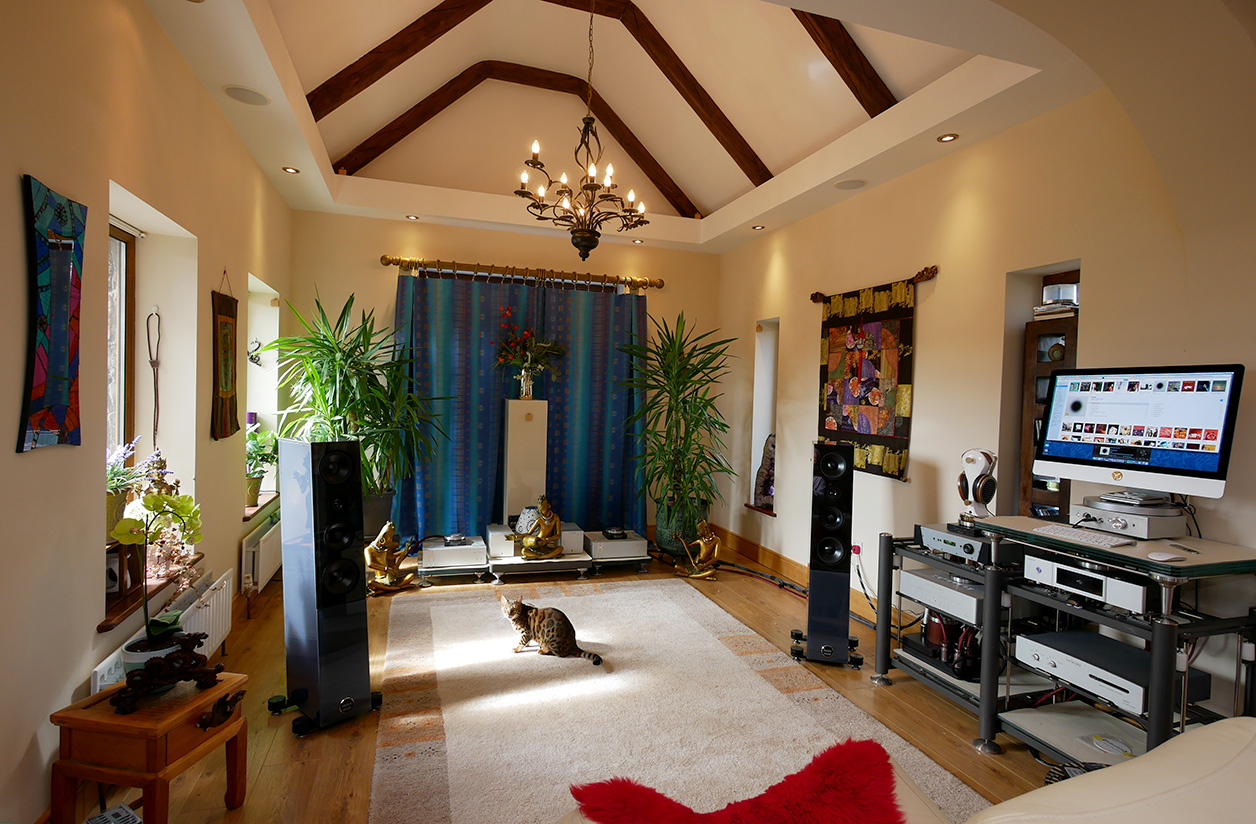 To experiment with variable damping on speakers I knew to favour very low damping—our best resident amps on these are FirstWatt's SIT-1 with a damping factor of 2, i.e. Z-out of 4Ω—I moved in our Polish Cube Audio Nenuphar. Coming well alive on 10 watts, they clearly were in no need of Gold Note's 175wpc in stereo. I just wanted to hear how they'd react to a 25 vs. 250 damping factor.  I'd never before played with selectable damping on one and the same amp. On these intrinsically leaner speakers, the overall tonal climate grew cooler still. I've represented its bluish feel with the hue of the next photo which lacks the gold/yellow aspects of the upper one where the spot lights and chandelier were on and the big curtains closed. 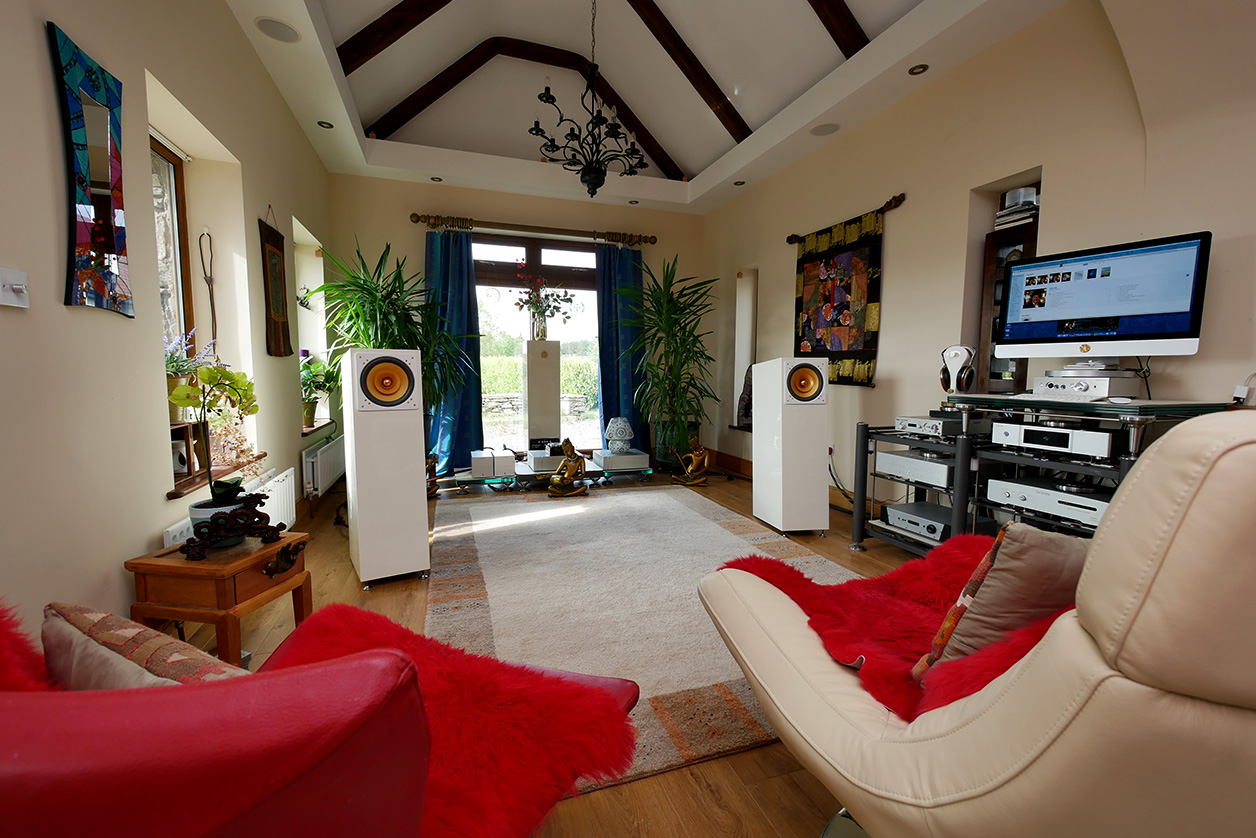 Bipolars + widebanders didn't seem to be ideally matched despite Nagra's classic though mild tube injections in the preamp. But that wasn't my focus. What would change when damping factor increased by a factor of 10 with one push of a button? Some bass disappeared. If that reads counterintuitive, blame a very powerful motor and a very light diaphragm which are inherently very well damped already to not need iron-fisted assist from the amp. It's why single-ended valve amps with basically zero damping (a nearly 1:1 ratio of output and input impedance) work so well on most widebanders yet suffer obvious limitations when they get strapped to modern multi-way speakers. With that loss of bass gravity and the associated minor bleaching of the colour palette, the presentation became more forward and energetically pinched. Lower damping sounded better even though the overall gestalt still emphasized taut crystallization over willowy suppleness. Knowing our Audio Physic Codex to be very similar to the departed Midex, experience suggested that the ideal speaker mates weren't Germans but sunny Southerners from Granada: Kroma Audio's overachieving Mimí topped by Franck Tchang super tweeters.